Deeper Understanding of Mod Batteries (part I)
​
Batteries are the most rudimentary part of any e-cigarette. It is the life force which drives the entire industry. With the initial e-cigarettes, the consumer didn’t have to worry about the type of battery their e-cigarette contained, only that it was safe and you screwed it into a charger when it was empty. With the explosion of the mod market, (no pun intended), and the rise of low resistance atomizers, the need for a more educated consumer has grown considerably.

This article covers what all the mystical numbers mean and how they affect your vaping experience. I will attempt to keep it as simple as possible without getting too technical and putting everyone to sleep...


What do all those numbers and letters really mean?
Battery identification can be one of the most difficult aspects of battery purchasing. All batteries are not created equal and just because two batteries are labeled IMR18650, does not mean they have the same capabilities, characteristics and safety features.

The entire sequence can be broken down as such:

Guide to Battery Specification Terms:
Batteries can generally be broken down by two major characteristics or specifications: capacity (mah rating) and amps (current handling). When choosing which battery to buy you must pick which characteristic is your priority for the application that you will use it. You can't have both the highest mah and highest amps in one battery. This is due to the limits of current battery chemistry & technology. Safety should always be your number one priority.

Capacity or mAh Rating - an approximation for how long a battery charge should last from 100% charge to when the battery will cut off. Roughly, 100 mAh = 1 hour usage with low drain applications like a flashlight.


In laymen's terms, the amp rating determines the amount of electrical current the battery can provide.​
The amp rating (CDR) specification is set by the manufacturer, and is a standard value in the industry. The "pulse or burst discharge rate" is not a standard value and varies from one manufacturer/vendor to another making comparisons from one company to another company impossible, and therefore should never be relied upon when choosing between brands and models.

Battery Amp Ratings: Continuous vs Pulse Ratings
Battery pulse ratings are useless! | E-Cigarette Forum​
The CDR isn't a suggestion. It's the safe operating limit of the cell. Never exceed the CDR of a cell.

Basic rule of thumb, to get CDR amps you have to sacrifice Mah and run time. To get Mah and run time you have to sacrifice amps and CDR. You won't find a battery which has both the highest amp rating and highest mAh capacity; that's the way it works with batteries.​
Battery duty cycle refers to the approximate number of recharges it can be “cycled” through before the battery will no longer hold a charge. Duty cycles can be up to 500 charges but will vary depending on the core battery composition.

It should be noted that while a lithium ion battery does not have “battery memory”, the capacity of the battery will diminish over time as you progress to the end of it’s life expectancy. This means you do not have to fully discharge the battery before charging it like you do with many other rechargeable battery types. You can also use it from the get go without first taking it home and throwing it on the charger, assuming it has a charge left when you receive it.

It should be noted that you will get longer life expectancy from a battery if you don't drain them down each time you use them. "Topping them off" (via charging) once they reach about 3.5 volts is better than using them until they stop working and causes no harm. Charging after "half" of a duty cycle of use will prolong the overall life expectancy of the battery. Consistantly draining a battery to 3.4 volts or lower before re-charging will decrease battery life expectancy.

Stealthy Statistics
The battery identifier described above tells a basic story on what the battery can handle, but for
an ecigarette, and more notably those who use mods, one of the most important ratings is the maximum continuous discharge rate, or amp limit rating. The maximum discharge rate became more prevalent when vapors started building their own coils for unregulated mech mods. With the natural progression of things, our extreme inner drive to produce more vapor, and sub-ohm (< 1.0 ohm) resistance coils, we are dancing dangerously close to the physical limitations of lithium ion batteries. This is because the lower the coil resistance, the more current (amps) it will draw from the battery. Attempting to draw more current than the battery has to offer can cause the battery to vent or explode.

At this point, I want to point out that some battery brands rebrand/rewrap batteries and then over-rate/exagerate the amp rating to sucker consumers to buy their batteries. These are known as "aftermarket" batteries. Are You Using a ReWrap Battery?

The maximum continuous discharge rate is generally measured in C and indicates how much current (Amps) you can draw from the battery without causing physical harm to the battery and yourself. Pull more than the maximum discharge rating and the battery becomes unstable, goes into a state of thermal runaway and can exhaust hot gasses, large flames or explode. Quite often, a mod's features will include terms like “battery vent holes”. These holes are in place to safely guide hot gasses and flames away from your face in the case of most battery failures. If they were not present, then a battery venting hot gas with it having nowhere to go could turn it into a pipe bomb.
There Was a Vape Blast at Vape Blast

What remained of a mech mod that exploded.

​
The C measurement unit can be a bit hard to understand. The C measurement indicates a current value relative to the batteries overall capacity. For instance, a 2,600 mAh battery with a maximum discharge rating of 1C can handle a maximum current draw of 2.6 amperes or 2,600 mAh; pretty simple. Change the rating to 2C and the maximum discharge rate is 5.2 amperes, 3C is 7.8 amperes, so on and so forth.

BATTERY (Lithium) TYPES:
Historical Understanding of the Types of Battery "Chemistry"
​
Updated 2/19/2018. The way we used to identify the different types of Lithium batteries (by chemistry type) is currently outdated. We can no longer choose a battery by ICR, IMR, INR, NCR, etc because many of the manufacturers have taken huge liberties with how they identify and market their battery's chemistry. Many manufacturers lump the term "IMR" to market their batteries, when in fact they are probably a different type of lithium battery than a "lithium manganese oxide" chemistry.

Currently, Battery Mooch says it really doesn't matter how the company markets their batteries. He suggests the only way to identify what batteries to use in vaping is by identifying accurate BATTERY SPECIFICATIONS. Please watch the below video.

IMR, or Manganese (Li-Mn) cathode batteries were, up until the last few years, e-cig modders' preferred battery type. IMR batteries originally used a simple manganese cathode which provided for much higher discharge rates than its ICR counterpart. This was not without a loss though. With the manganese high drain cathode, IMR batteries had a much smaller duty cycle and overall battery capacity was nearly half of the ICR.

Over time, manufacturers started mixing manganese with nickel to improve the duty cycle and capacity of the battery with only a slight reduction to the maximum discharge rate. IMR batteries have a safer basic chemistry than ICR batteries as they can sustain higher internal temperatures before becoming unstable. The manganese cathode has a much lower internal resistance as well, which is the driving force behind the higher drain rating because resistance has a direct correlation to heat generation.

It is also worthy to note that some companies may call their IMR-Hybrid batteries simply IMR. In 2018, there are probably no true IMR batteries being sold on the market. Like ICR batteries, IMR batteries are "old technology".

Panasonic calls their hybrid batteries NCR, and Samsung and LG call theirs INR.

Note that not all Panasonic NCR batteries are considered "high drain". The Panasonic NCR18650B 3400 mAh and NCR18650A 3100 mAh are low drain and are designed and best suited for applications like a flashlight, and not mods. Their amp limits are under 8amps continuous discharge rate; in fact the vast majority of Panasonic/Orbtronic batteries are just 10 amps continuous.

Hybrid batteries are capable of a much lower minimum discharge voltage before causing physical damage to the battery. The battery is capable of being discharged to 2.5V whereas IMR/ICR batteries have a cutoff around 3.2V.

ICR (Li-ion), or Cobalt electrode batteries were the original form of lithium ion batteries. These batteries could handle most factory-made atomizers found in earlier clearomizers or cartomizers. ICR batteries were known for their higher capacities and were suited for the early "entry level" vaping devices, but they are not at all well suited for use in advanced devices such as a regulated variable wattage mod or a mechanical mod with RBA juice attachment.

Due to ICR batteries not being safe chemistry and having an unacceptable amp rating for today's APV's, they are no longer recommended for vaping and are considered to be obsolete. 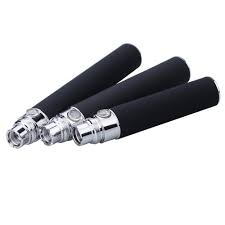 LiPo batteries are used in the vaping industry in eGo batteries as well as in regulated box mods, regulated tube mods, and pod mods which use an internal, non-replaceable battery.

They generally use onboard USB charging. Like ICR, they are not a safe chemistry and depend upon the protection circuitry of the processor to even be considered to be relatively safe for vaping purposes. In thermal runaway the reactions are extremely violent and usually accompanied by flames. Their higher reaction temperature creates a lot more gas a lot faster. This can lead to very violent bursting of the battery case.

Choose between the more reputable, higher quality brands of external batteries like LG, Samsung, or Sony. Purchase them from reputable battery suppliers such as IMR Batteries, LiIon Batteries, or RTD Vapor to avoid counterfeits.

Make sure the model number has an adequate amp rating (CDR) for your particular needs. You don't necessarily require a 30 amp battery if you are only vaping at 30 watts. Would you like to learn more? Battery Basics for Mods: The Definative Battery Guide for Vaping

End of Part I - click here for Part II
​
Resources: