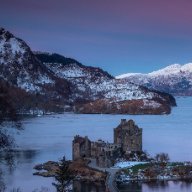 Back on the Forum - we've been moving and doing up the new house so real life got in the way of Forum Life! Sep 28, 2020