Here I am again to present yet another review. This time I’ll be taking a look at not one but two new tanks by Dovpo. These new tanks are continuations of the Blotto series that Dovpo has released with cooperation from Vaping Bogan aka Sam Parsons. After having tested both the Blotto Max and the Blotto V1.5, I would consider the Max as a dual coil rta and the V1.5 as a single coil rta although I guess you could try to stuff a dual coil into the V1.5 but I didn’t. Both tanks are very similar in appearance but differ in size and of course the Max has a larger build deck. Let’s take a look at some features and what’s included and I’ll talk about my experience with these tanks. 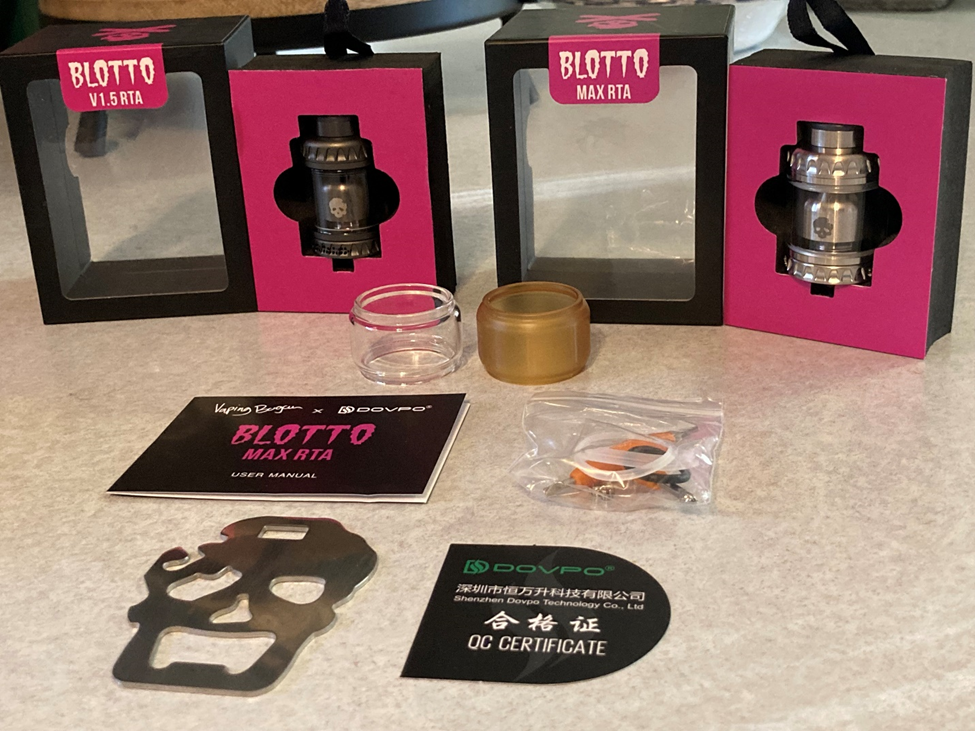 The packaging of the Blotto tanks is the same as what I saw on the Blotto Single Coil RTA that I reviewed previously. They come in the black and pink boxes with a clear window in the front so you can see the tank inside. I rather like it. I can’t tell you how many times I’ve opened a sample where the picture on the box isn’t the version of what’s inside the box. I received the gunmetal version of the V1.5 and the silver version of the Max.

The back side of the package shows the features of the tanks and the company information for Dovpo. Once opened, inside I found each tank with the straight glass installed along with bubble glass, PCTG bubble tube, the metal skull which is used for trimming the coils, user manual, and spare parts bag. No coils or cotton were included with the tanks. 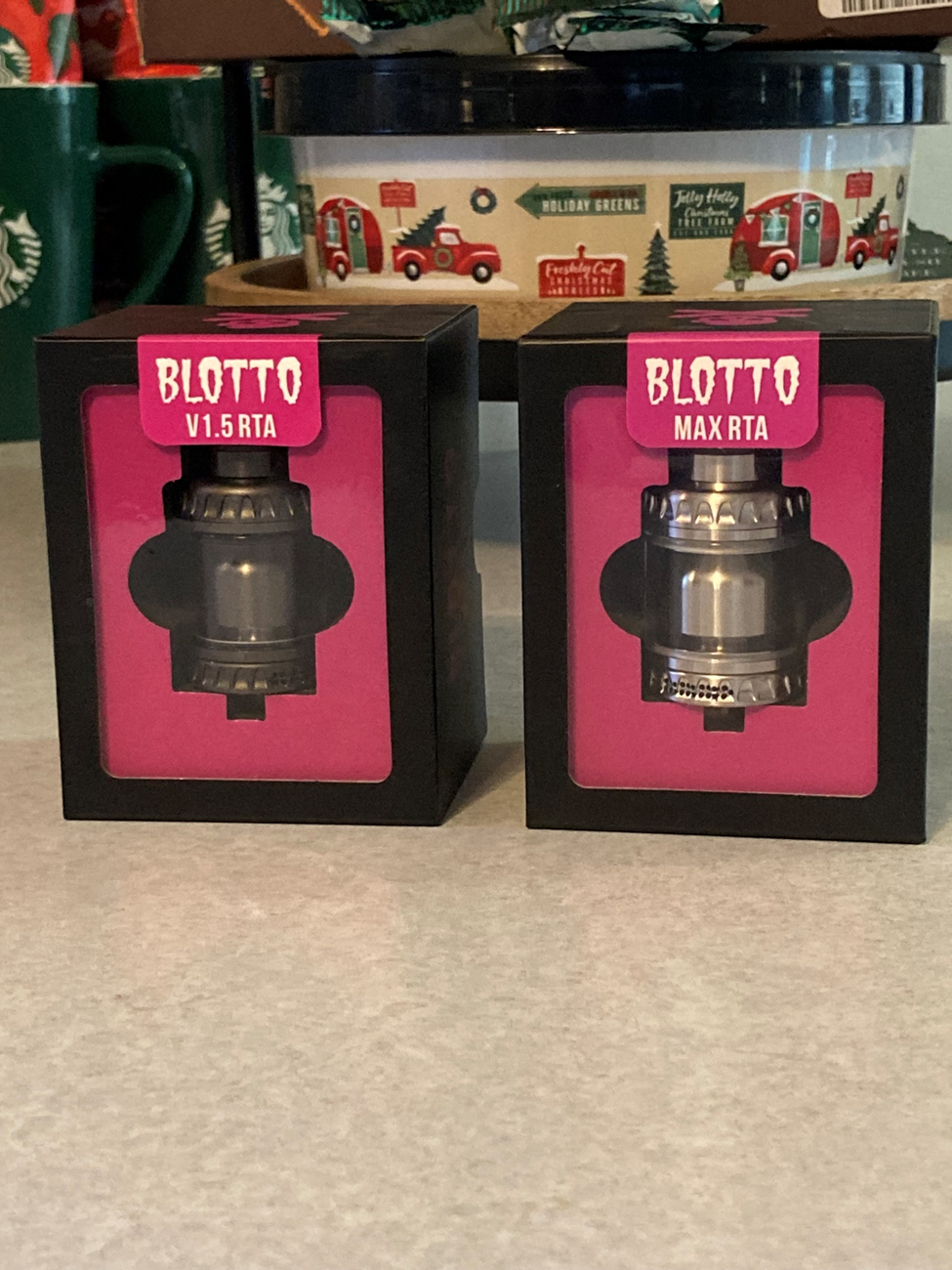 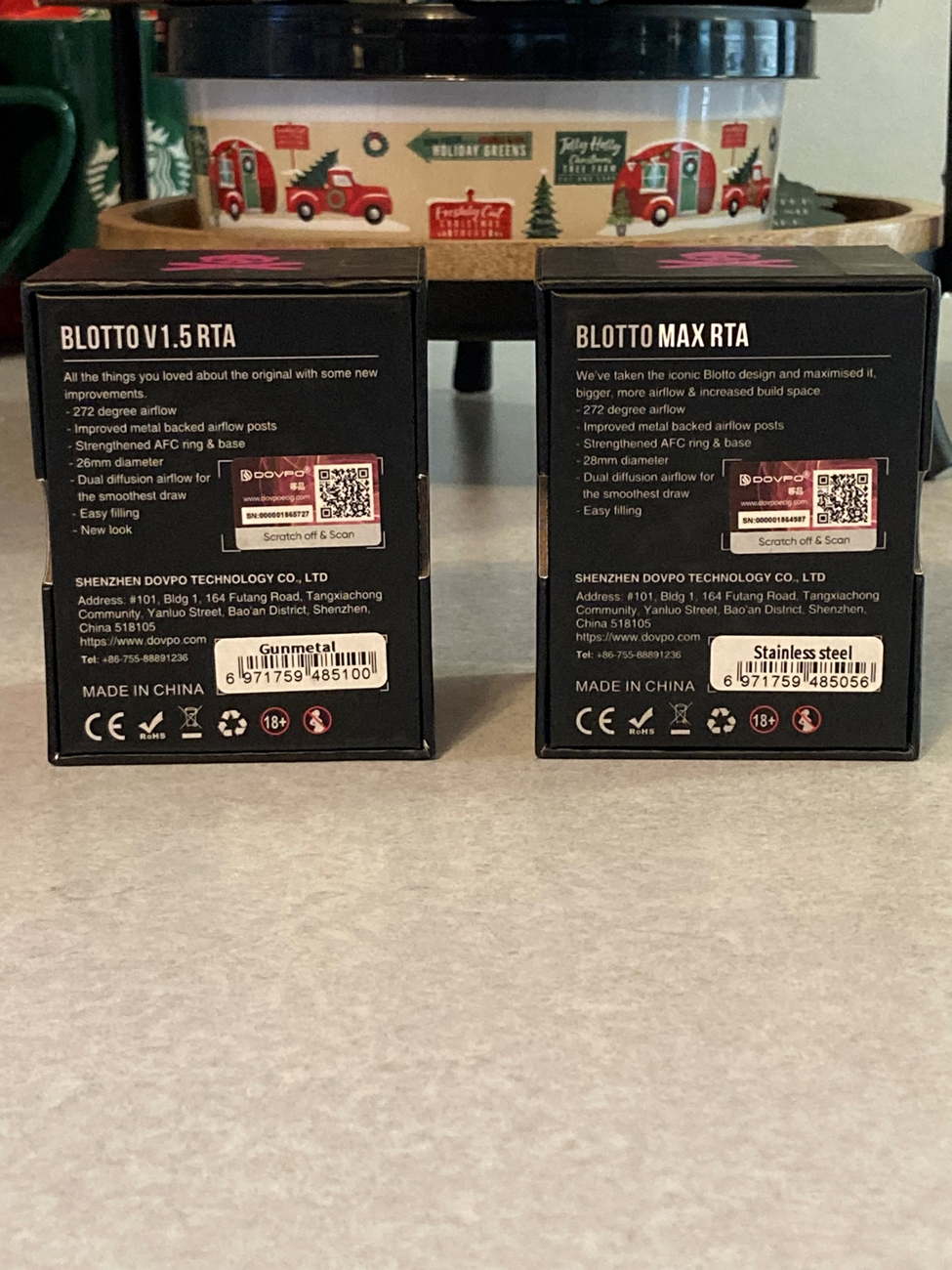 After cleaning both tanks I immediately wanted to install the bubble glass tank sections on both tanks. The straight glass on the V1.5 wasn’t hard to get off but the glass on the Max was a different story. It was really stuck to the o ring and thought I was going to have to break the glass but after a few tries was finally able to remove it without damaging it. This seems to be a recurring trend on the Blotto tanks.

Below are images of the V1.5. Dovpo has stuck with the bottle cap aesthetics used on prior versions. A quick turn and the top is removed for filling using the nice sized fill port openings. The airflow on both tanks is still using the honeycomb style airflow. I feel like the V1.5 has a little more airflow than the Single Coil version did but not a lot more. I liked the V1.5 with a single coil and the airflow wide open. I used a .35 ohm Ni80 fused Clapton coil and ran it in the high 20’s range and got very good flavor. I do feel like it might have been good if there was a little more airflow available.

As you can see in the third picture, the tank is easily disassembled for cleaning. This one wasn’t very hard to remove the straight glass. I did notice that once the bubble glass was installed that I needed to be careful to hold the glass in place when removing the build deck for rewicking when there was still liquid in the tank or the glass could move and liquid could spill and make a mess. I like how when inserting a coil in the V1.5 that you can use the post screws on one side instead of being offset like they were on the Single Coil. This makes coil installation much easier. The last picture in this series shows a standard 316ss Clapton coil that did not work well for me and that’s when I switched to the Ni80 coil that I used for testing. I got the wicking too tight on my first attempt and decided to change out coil and wick. 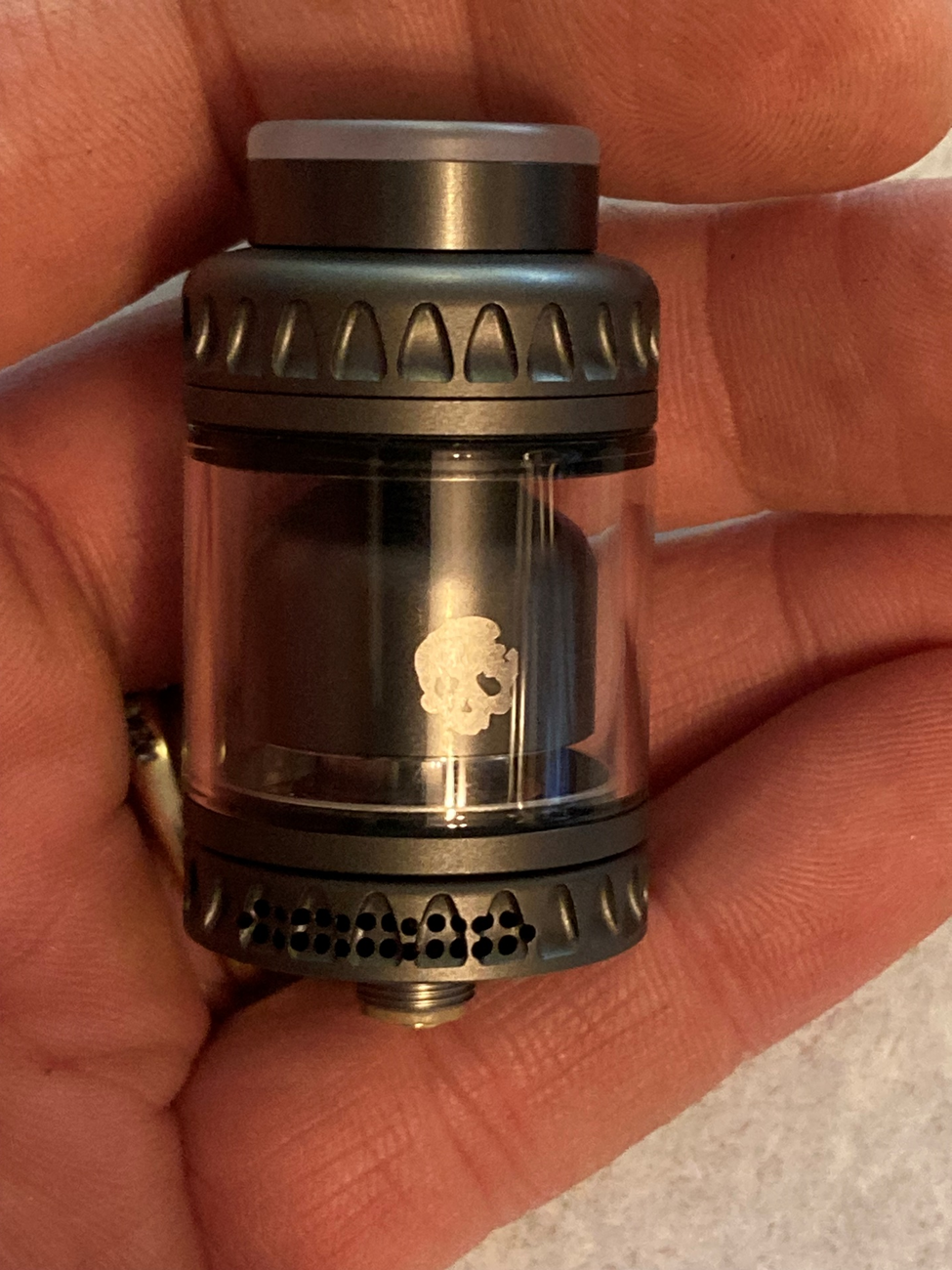 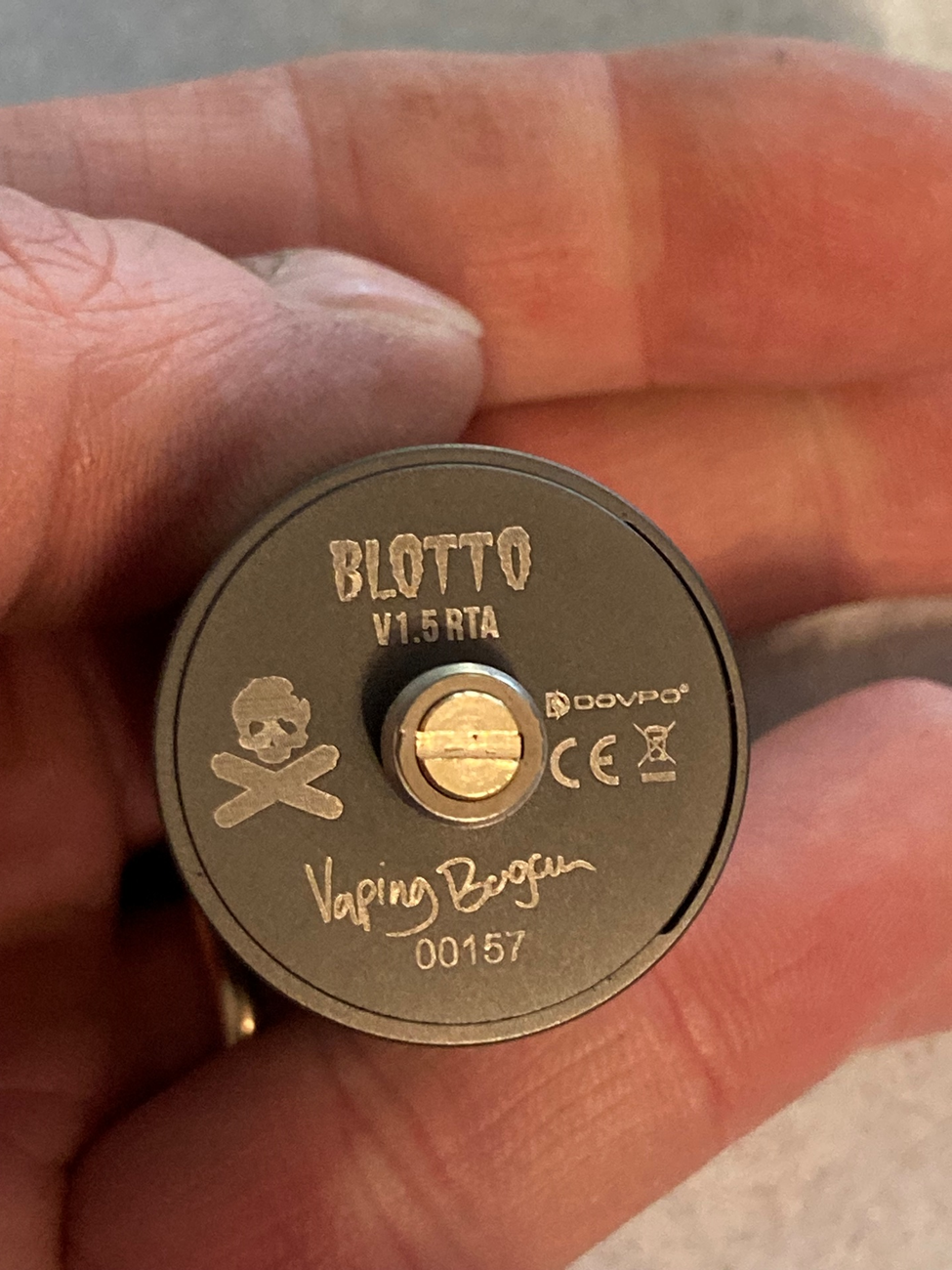 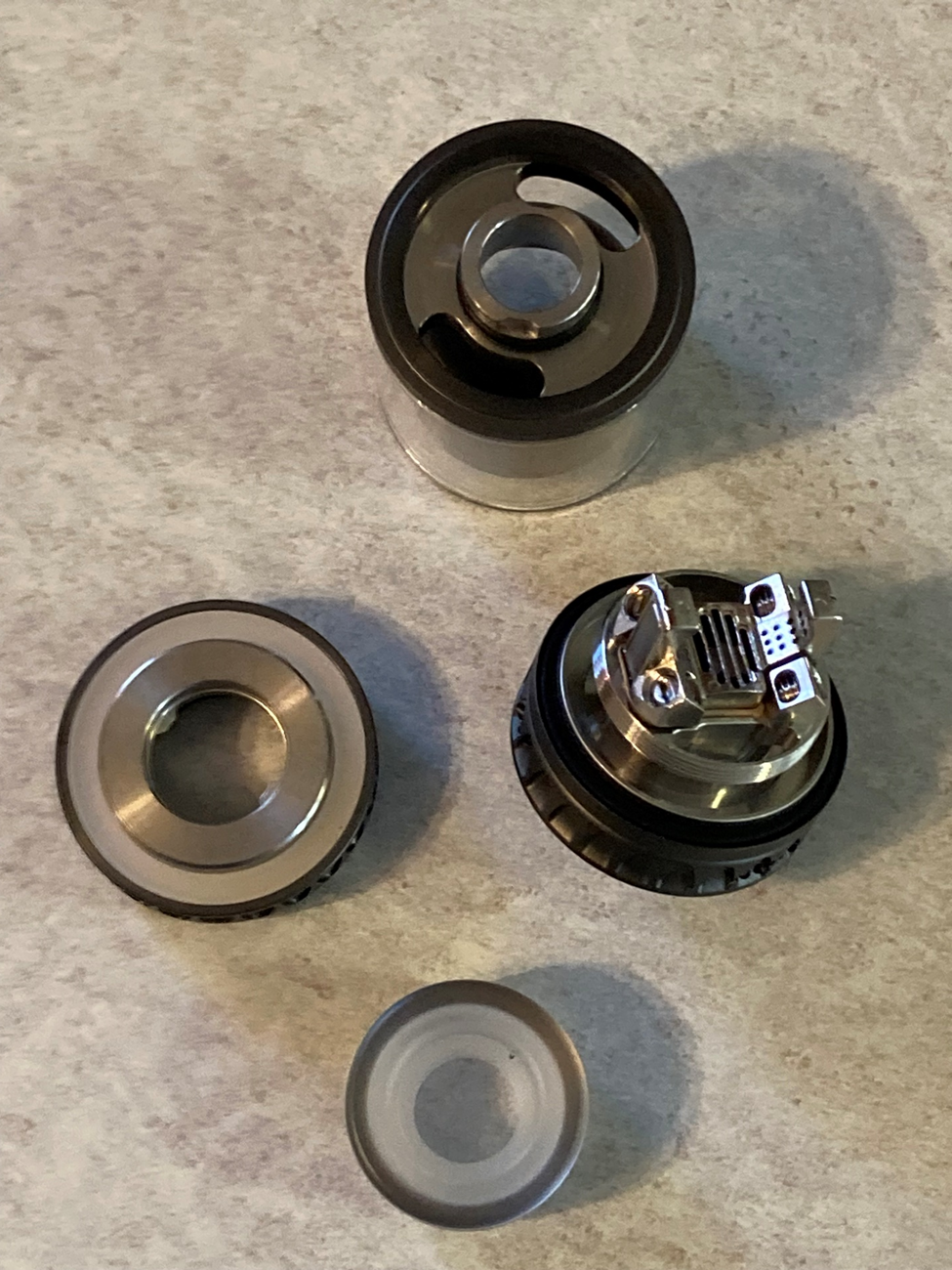 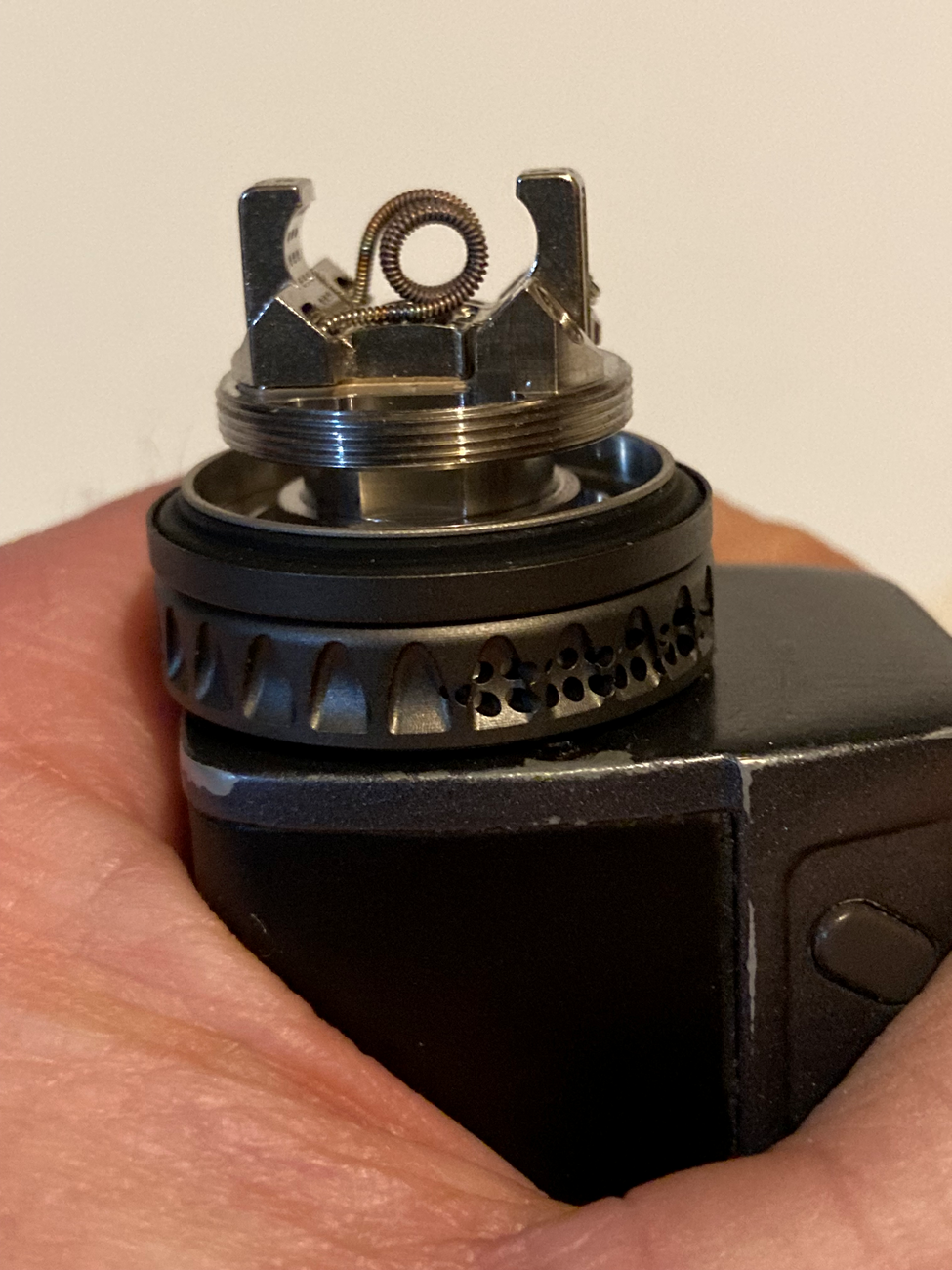 Now to take a look at the Blotto Max. As you can see in both tanks there is airflow under the coils and also on either side with small holes in the uprights to provide the 272 degree airflow. I used two Ni80 fused Clapton coils rated at .4 ohms but for some reason the mod I was using the tank on came up reading .12 ohms when I would have thought it should have been closer to .2 ohms. The Max does have more available airflow than the V1.5 but once again I felt like it should have had more available airflow. I did however run the Max with the airflow at about ¾ open but think that some people may expect more airflow from a dual coil tank.

I didn’t get any dry hits but the vapor density wasn’t quite what I would expect from a dual coil rta. I might have been able to thin the wicks out a little bit more but didn’t want to thin them too much and take a chance of flooding or leaking. I experienced no leaking from this tank while testing it. I was running the tank at around 45 watts and would call the flavor production average. 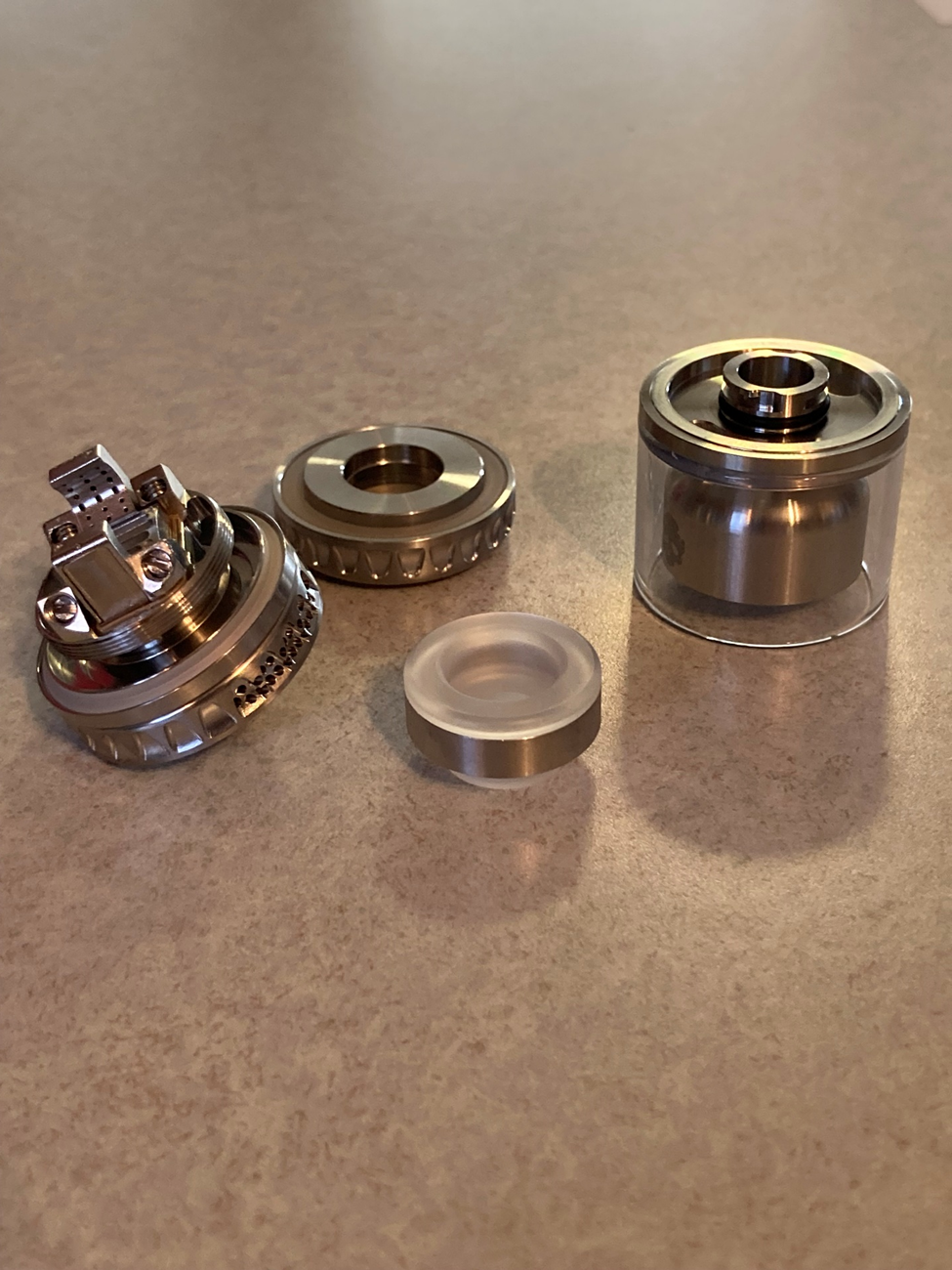 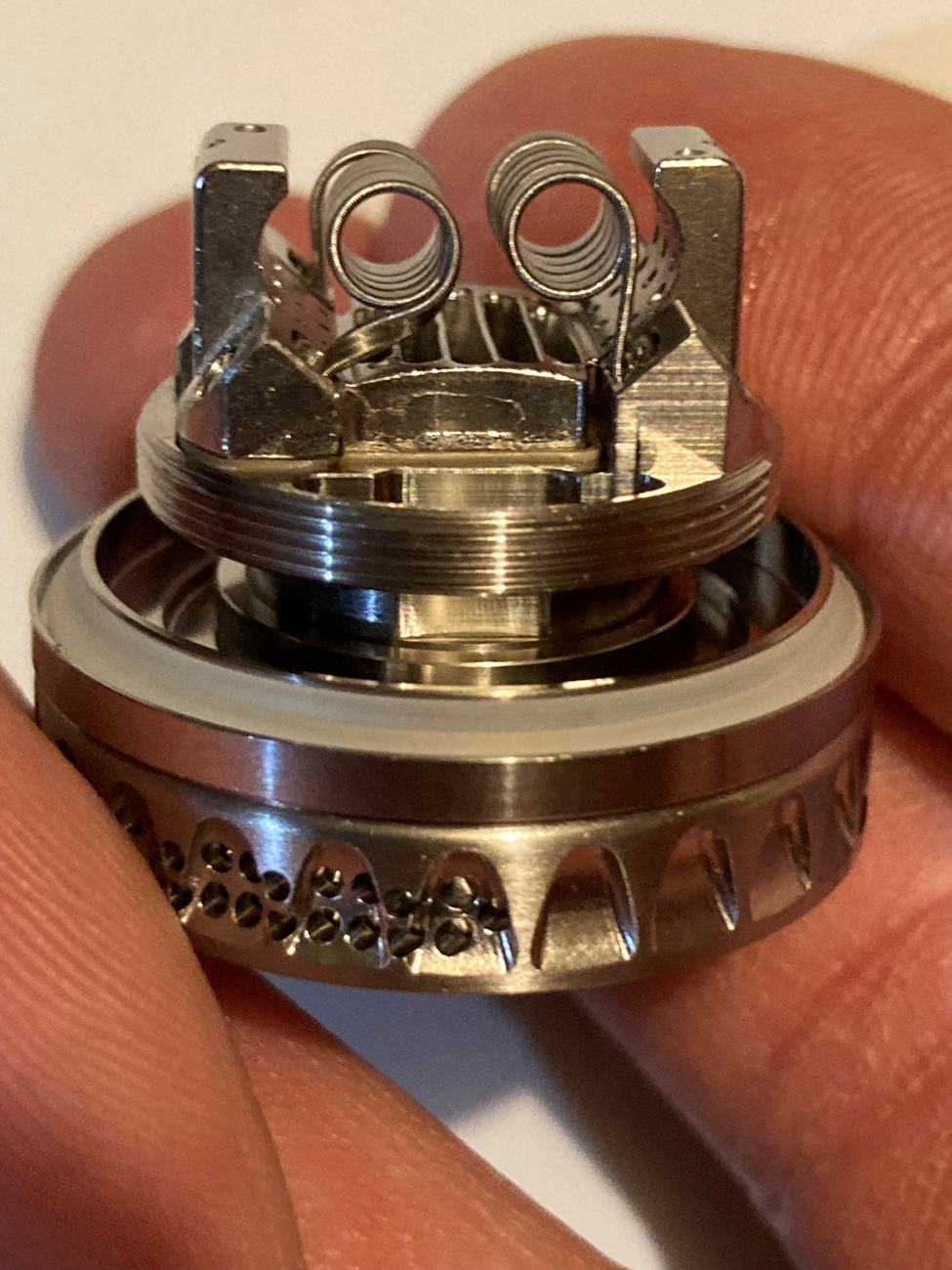 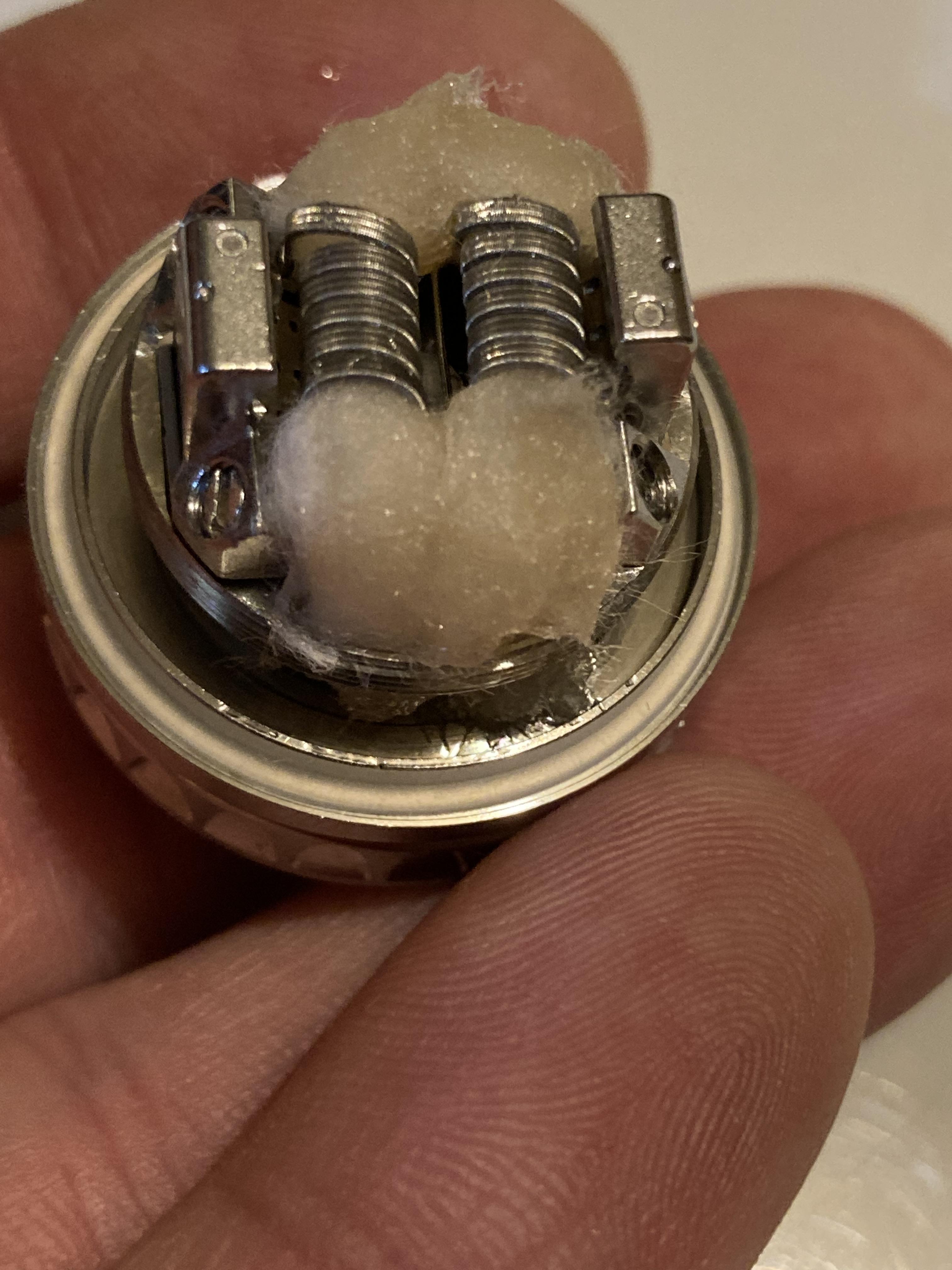 I greatly appreciate the opportunity to try both the Dovpo Blotto V1.5 and the Blotto Max rtas. I found both tanks fairly easy to build and wick. For my style of vaping, I really very much preferred the V1.5. It could be due to my building skills as I don’t use a lot of dual coil rtas but I found the V1.5 to provide superior flavor compared to the Max and found it interesting that the V1.5 had a slightly larger liquid capacity.

I’d like to thank Dovpo and Neil for sending these tanks for this review. Thank you to the readers as always. Below is a link to the website. 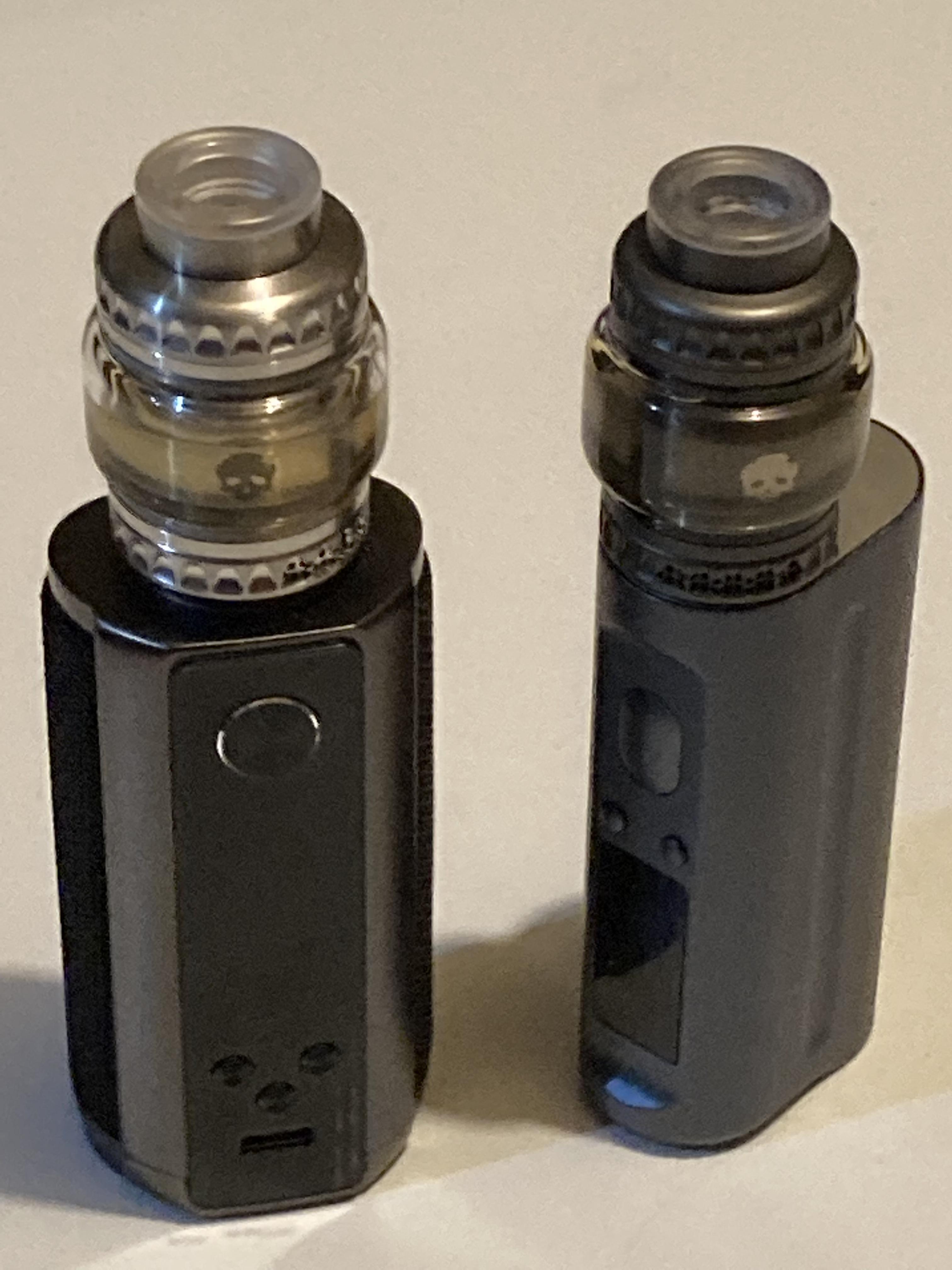 Nice review They both look like nice tanks.
Reactions: hittman
•••

Thanks Fran. I know you’re not into DTL tanks.
Reactions: FranC
•••

hittman said:
Thanks Fran. I know you’re not into DTL tanks.
Click to expand...

Nice review Hitt. How would you rank the 1.5 amongst your favorite RTAs?
•••

Z-Lee said:
Nice review Hitt. How would you rank the 1.5 amongst your favorite RTAs?
Click to expand...

What is your favorite RTA?
•••

Z-Lee said:
What is your favorite RTA?
Click to expand...

I think my favorite of all time is the original single coil Zeus RTA but I've tried a lot of really good ones lately.
•••

hittman said:
I think my favorite of all time is the original single coil Zeus RTA but I've tried a lot of really good ones lately.
Click to expand...

Really? I skipped over that in favor of the Zeus X Mesh. I'm sure that's cheap now, I wonder if I can find a good sale on it.
•••

Z-Lee said:
Really? I skipped over that in favor of the Zeus X Mesh. I'm sure that's cheap now, I wonder if I can find a good sale on it.
Click to expand...

I like it because it's very easy to build with pretty good flavor. The 316SS flat braided coils I like fit perfectly in it. I don't know if you can still find them anywhere or not. I stocked up on them and extra top caps quite a while ago.
•••

hittman said:
I like it because it's very easy to build with pretty good flavor. The 316SS flat braided coils I like fit perfectly in it. I don't know if you can still find them anywhere or not. I stocked up on them and extra top caps quite a while ago.
Click to expand...

Thanks, I'll keep an eye out for it.
Reactions: hittman
•••
Show hidden low quality content