Hello again. I’m back with another review for Freemax. This time I’ll be looking at the Marvos RTA Pod. This pod is compatible with all of the Marvos series of pod mods and can work with the Marvos S with the pod tank base. The pod has two sided airflow control and the control does have a positive stop. The pod uses an 801 drip tip that has a V shaped groove at the edge to help it be more spit back resistant. The pod has a 3.5ml capacity which isn’t bad but nothing to brag about. Before I go into too much detail, let’s take a look at what’s included and some features then I’ll talk about my experience with it. 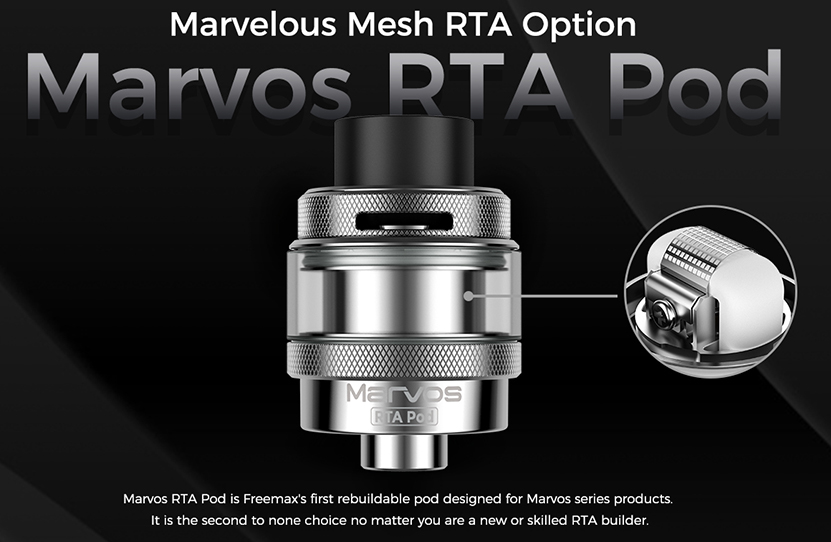 Compatibility: Compatible with all Marvos products 4. V-shaped groove design at the edge of the 810 drip tip

5. Compatible with both replaceable mesh coil and DIY wires

6. A spring-loaded ceramic block to support the cotton

9. Strong magnets guarantee quick and perfect match with the mod 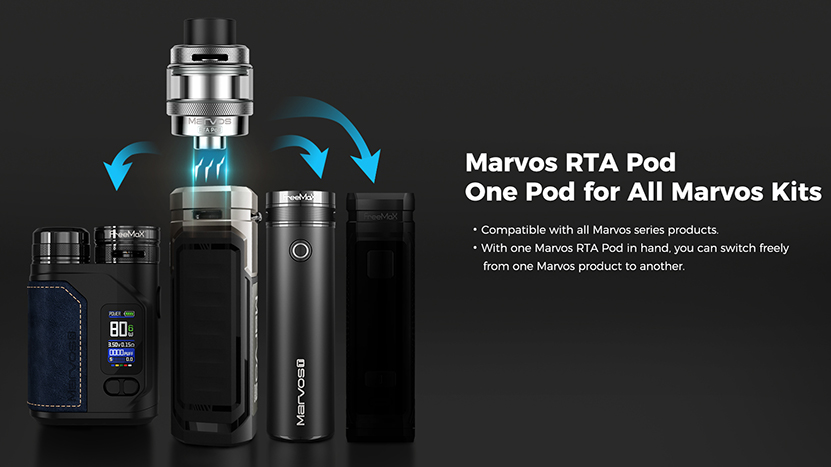 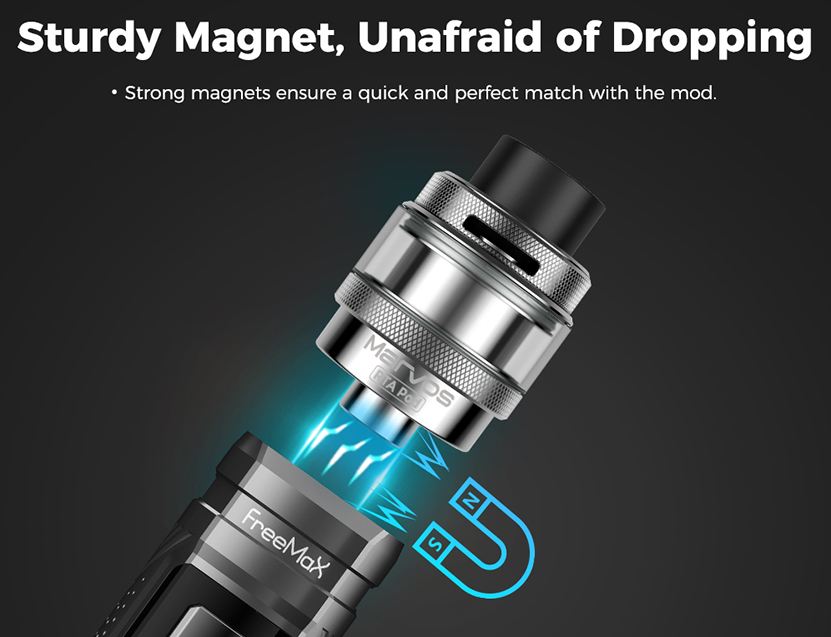 The packaging for the Marvos RTA Pod is the usual blue, white, and black colors with a picture of the pod on the front of the box. Rather than put the contents on the back, they chose to put the contents list on the side of the box. The box opens from either end and the pod is held in a plastic tray with the accessory items tucked underneath the tray. 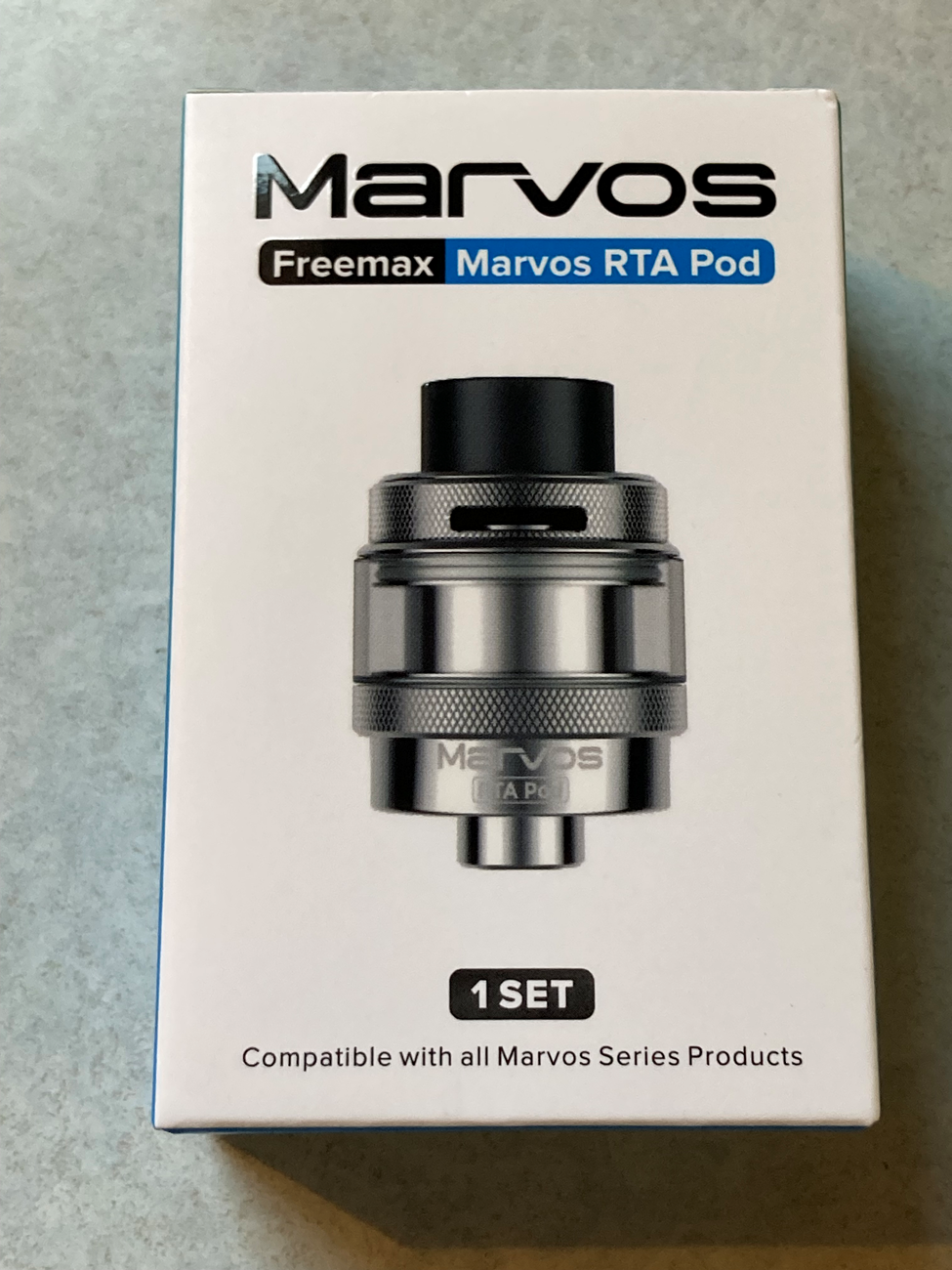 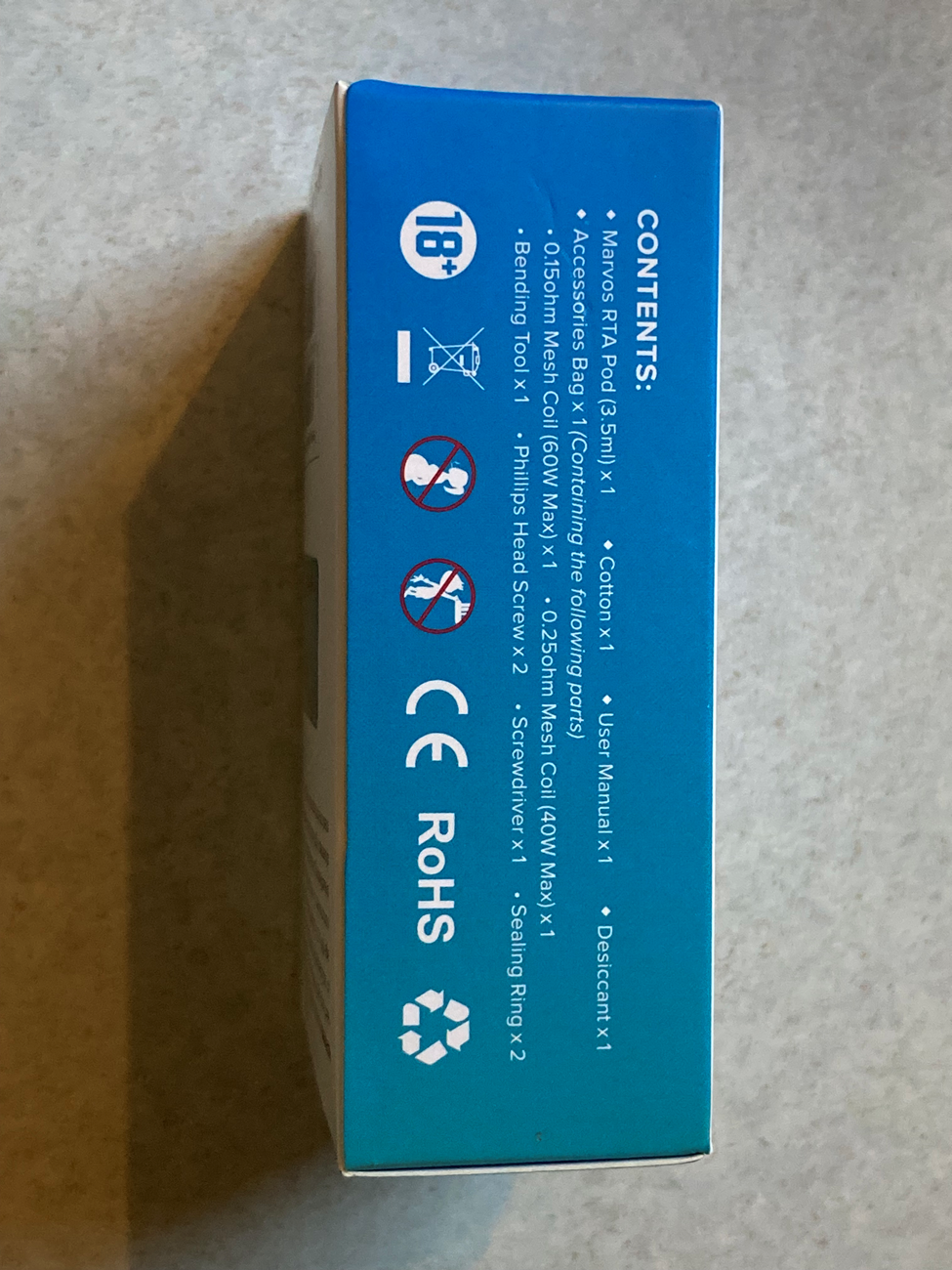 I have to be honest. I was a little disappointed by two things that I noticed upon opening the box and taking it apart and inspecting the contents. The first thing I noticed was that the tank section of the pod was not glass. It’s PCTG or something and is frosted a little which makes it slightly difficult to see the liquid level if using a clear liquid but not too bad. All of the pictures on the website show a clear tank section making one think that it is clear glass. The sample I received is not clear like the pictures. The second thing I noticed is that there were only two mesh strips included. I feel like more mesh strips could have been included without affecting the price too much.

On a positive note, the tank is very easy to disassemble and clean. To remove the base it is just a quarter turn to loosen and remove. I really like that. Just like the other Marvos pods, the fill port is found on the bottom of the pod and has what feels like a good quality silicon plug. The opening was large enough to use the 10 and 50ml bottles that I normally use. A glass dropper might get a little messy but most plastic bottles should work fine. There are four magnets on the bottom of the pod and I thought that would be plenty to hold it firmly in place on the Marvos 60w that I used for testing but found that if I place a finger on the pod while firing that I can tip the pod.

The drip tip used on the pod is an 810 drip tip. It has a V shape that helps to prevent spit back but it is replaceable if you would like to use your own tip which I did. 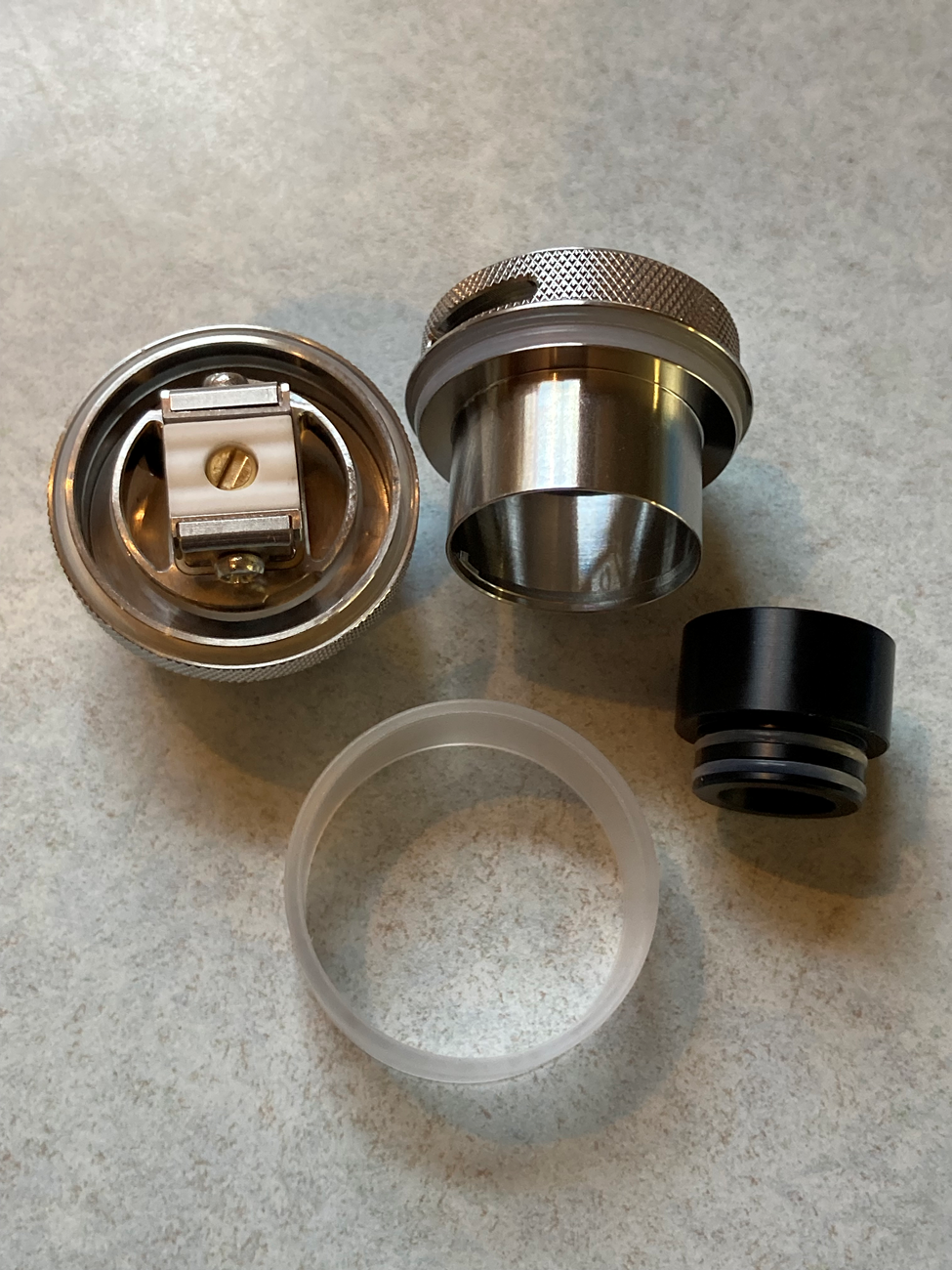 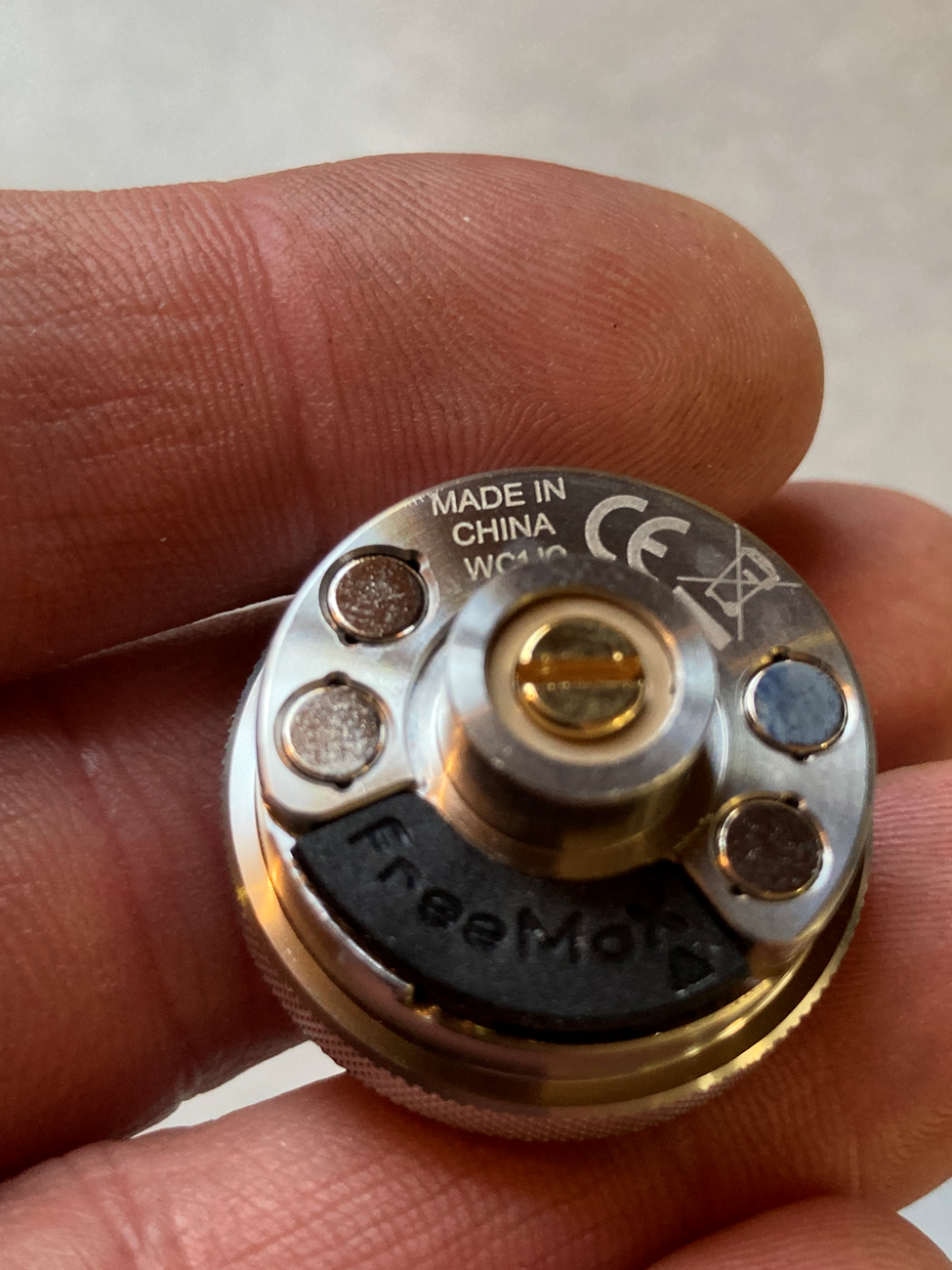 I was very surprised by the amount of airflow that the pod offers. I ended up running the airflow less than half open the entire time I used it. It really offers a lot of airflow for a small tank. There are two narrow but long airflow slots. The airflow adjustment on my sample was very loose to turn but did have a stop. It was loose enough that I found that I frequently accidentally moved the airflow adjustment when taking it in and out of a pocket.

It’s hard to see in the picture below but it does have the Marvos name and RTA Pod etched in the bottom of the pod. 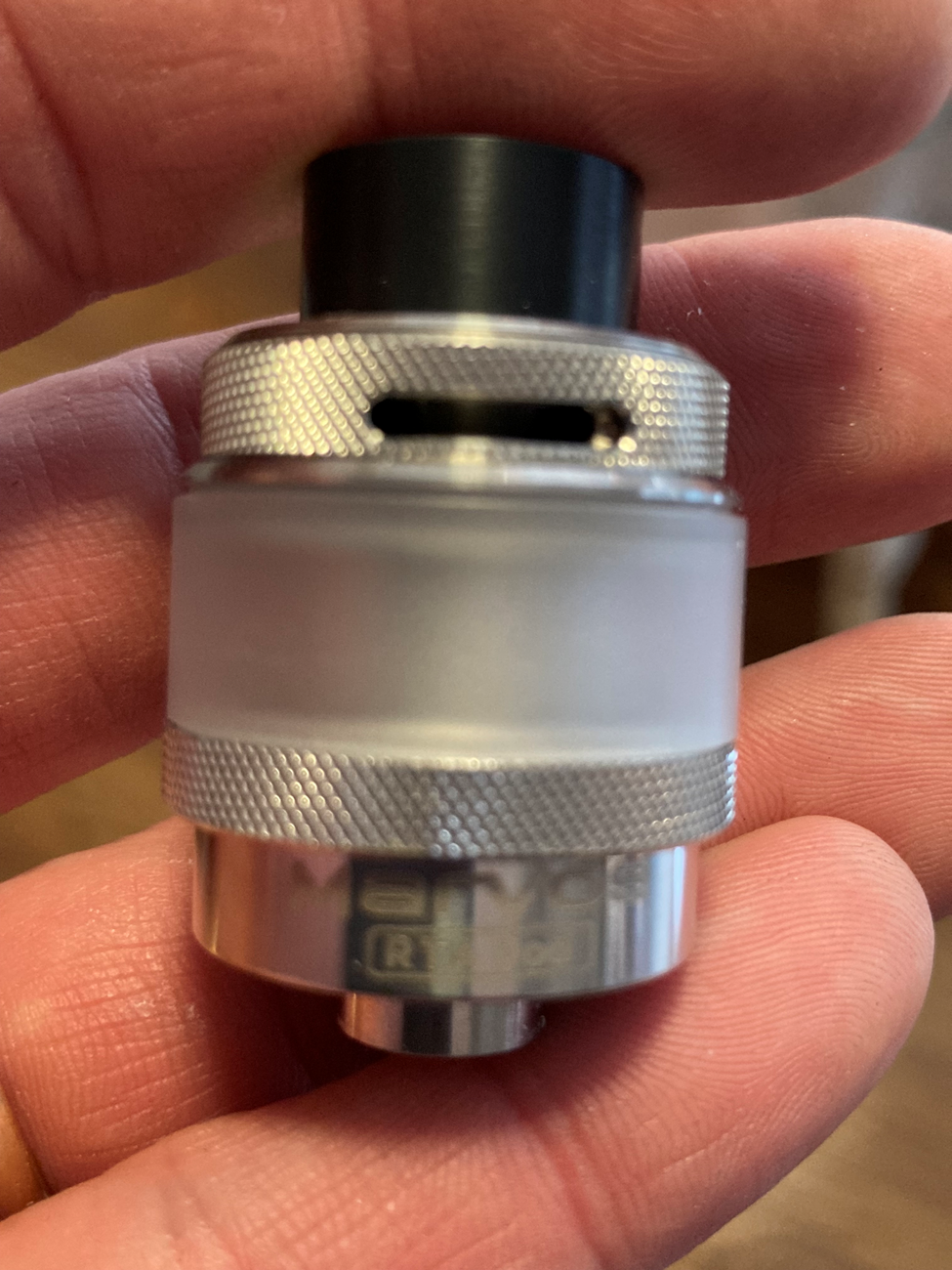 The build deck has a single Philips head screw on each side that must be loosened to insert the mesh coil. The literature says you can use standard wire coils also but I did not try one since I felt it necessary to test the pod with the included mesh strip coils. Included in the package is a hollow metal tube that is used for shaping the mesh before inserting it. Simply hold the mesh strip and bend it tightly around the tube.

I experienced some trouble with my first attempt at building the deck. When you loosen the deck screws, the clamps are not spring loaded which made it hard for me to insert the coil without getting it out of shape. The clamps kept sliding closed while I was trying to insert the mesh. In the center of the deck is a ceramic plate that does have a spring under it to push the wick up against the mesh coil. I thought I had enough cotton in the deck and trimmed and thinned the tails out quite a bit but was getting intermittent atomizer short messages and somewhat dry hits. I ended up tossing the first coil which was the .15 mesh coil along with the wick. On the second build I installed the .25 ohm mesh coil and stuffed the wick under the coil as tight as I could get it. Once again I trimmed and thinned the tails. This time I had success. I immediately could tell the cotton was more saturated but it did take a little while to break in the new coil and wick. After the second build I am fairly pleased with the flavor. I did however experience some difficulty installing the coil due to the clamps moving. I had to reshape the coil after tightening it in place. 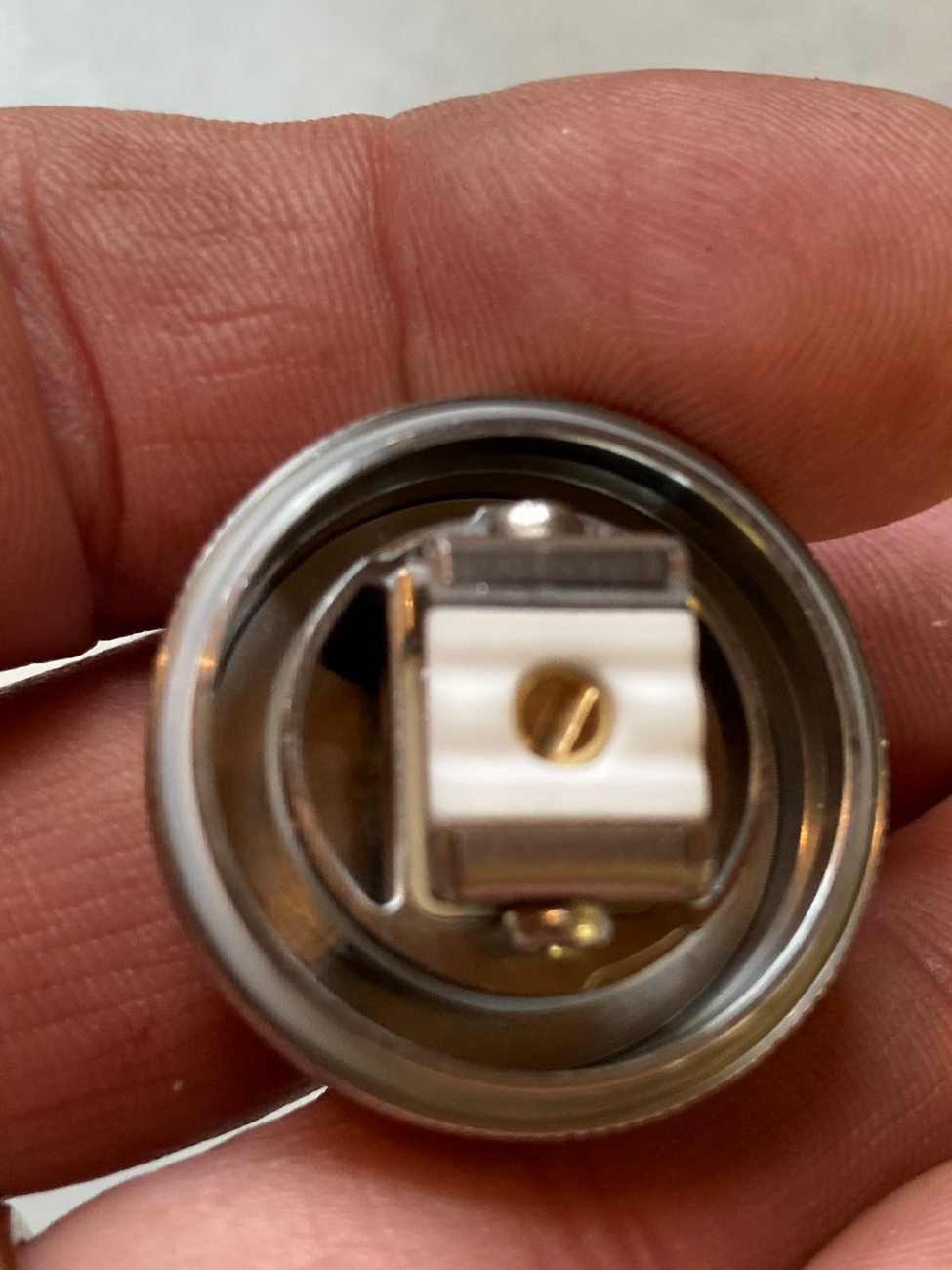 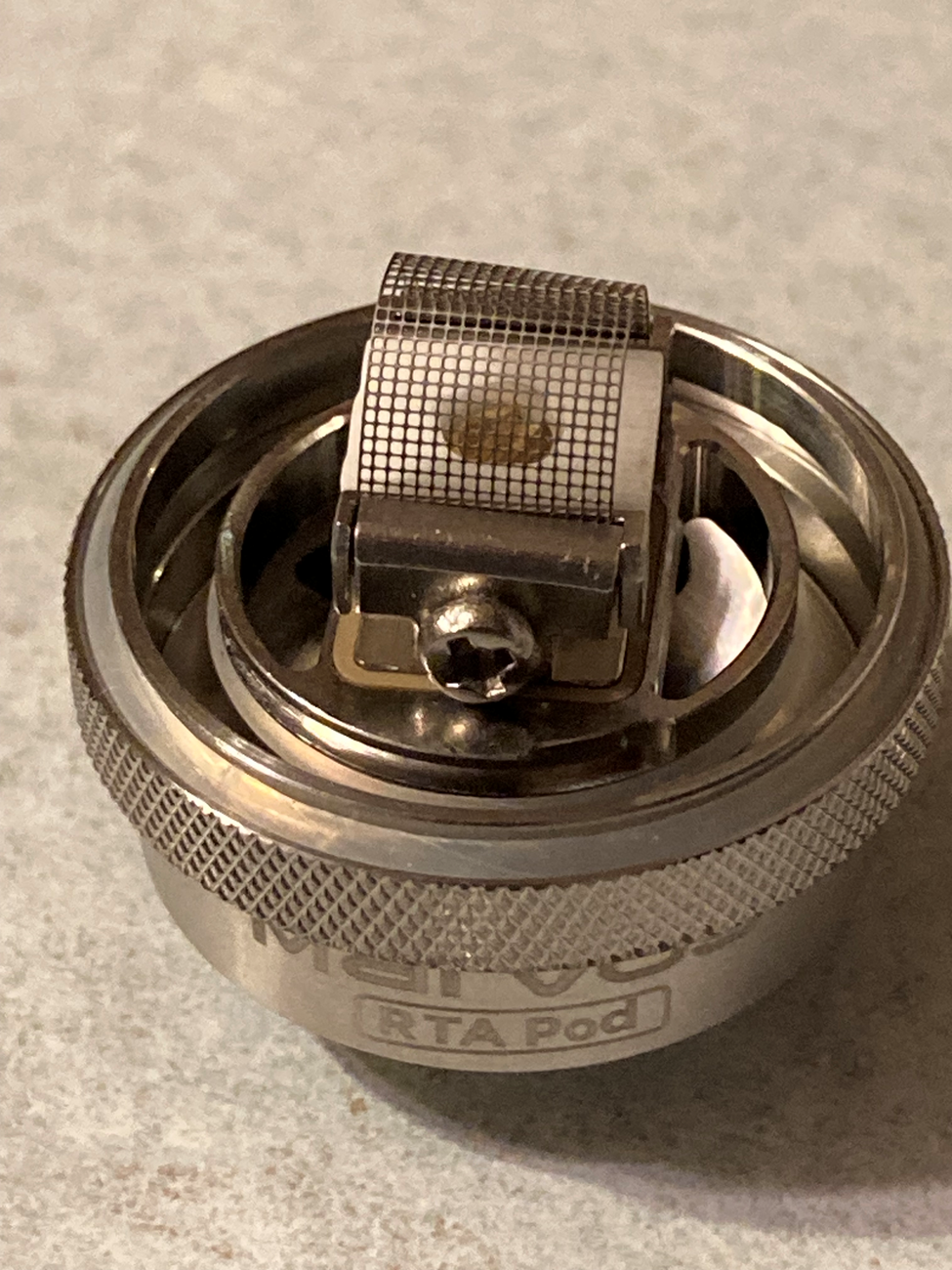 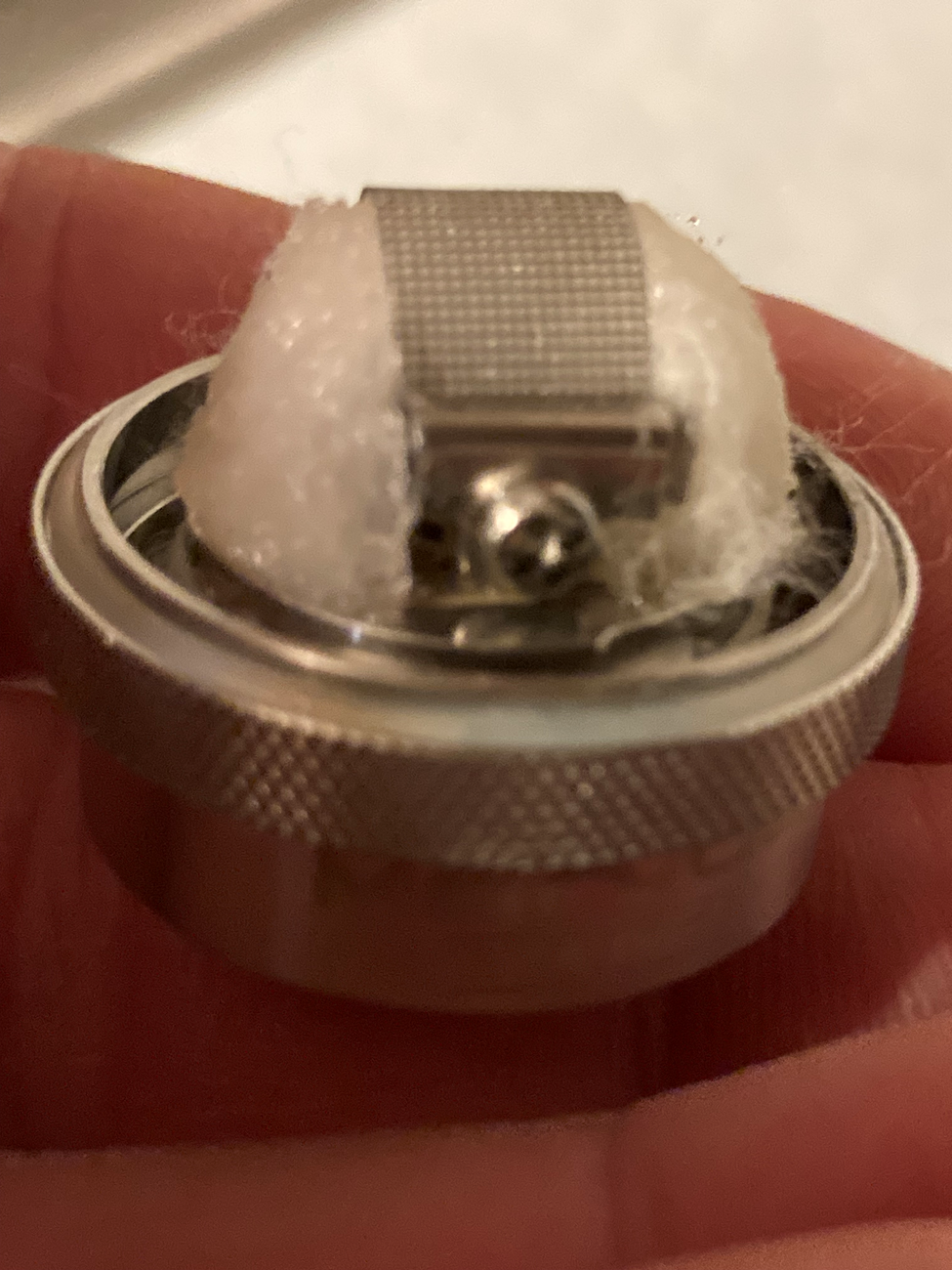 I have to say that I have mixed emotions after testing the Marvos RTA Pod. I did end up with decent results after the second build but do wish that more mesh strips had been included with the pod since my first attempt at building ended up being a failure.

I do like how the base is a quarter turn to remove it but both attempts at building were a bit difficult when trying to install the coil. This was mostly due to the clamps not being spring loaded. If they were then they would have stayed open while trying to insert the coil and feel like having to keep moving the clamp plates open caused my mesh to become misshapen which I believe is why I was getting an atomizer short message on the mod occasionally. I tried the pod first on the Marvos 80s and then switched to the Marvos 60W to make sure it wasn’t a problem with the mod. It seemed like the clamp plates were sticking on the screws and had to use a screwdriver to move the plates back open.

As I mentioned earlier, I wish the tank section would have been made of clear glass rather than the frosted material that the sample I received had. I am used to bottom filling on many pod mods I’ve tried before so am quite used to it but do wish that this one could have been top fill since it is an accessory for the entire Marvos line of pod mods.

I really feel like Freemax had a good idea with this RTA Pod but do feel like there are a few things that could be improved on to make it more user friendly. So there it is as honest as I can be about my experience with the Marvos RTA Pod. I’d like to thank Freemax for finally sending this for review as I’ve been wanting to try it for a while now. Also a big thanks to the readers. Below is a link to the website if you’d like to take a look.

Nice review once again, hitt Another one not for me.
Reactions: hittman
•••

FranC said:
Nice review once again, hitt Another one not for me.
Click to expand...

You're good at this!! Good review
Reactions: hittman
•••

charlie1465 said:
You're good at this!! Good review
Click to expand...

Thanks. I didn’t love this one but the rep said I may have gotten a bad one and will send another the next time they send review samples.
Reactions: FranC
•••

Good review, but not for me.
Reactions: hittman
•••

dennism said:
Good review, but not for me.
Click to expand...

Thanks. Yeah, unless your currently using one of the Marvos mods then not much point. The 80s did come with a 510 base but the pod did not.
Reactions: dennism
•••
Show hidden low quality content