Hello and welcome back for another vape review that comes to me from Sourcemore, I will leave a discount code if you purchase the kit at Sourcemore later in the review. I was pretty happy and excited to have a full sized mod and tank combo to review with so many pods flooding the market and it's a touch screen on top of that. The T- 200 is a dual 18650 device with a maximum power output of 200 watts and has 6 power modes with different themes and wallpapers to customize to the users liking. The mod is paired with the Z-tank ( 2021 ) that I've reviewed many times in the past on other mods and it works very well. There's a lot to cover with this kit so lets get started. 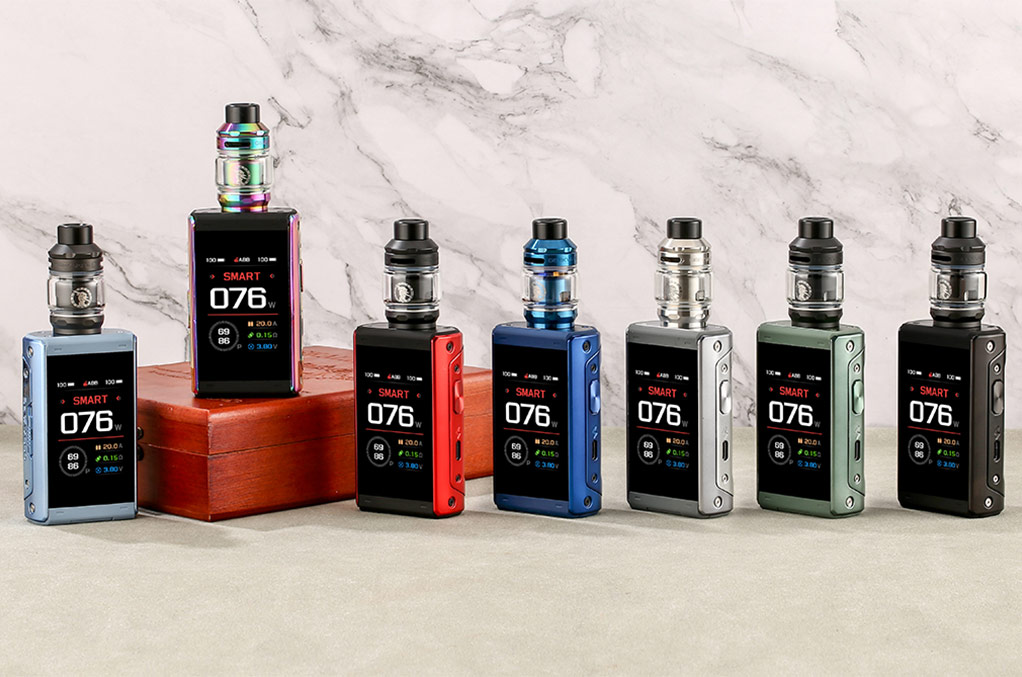 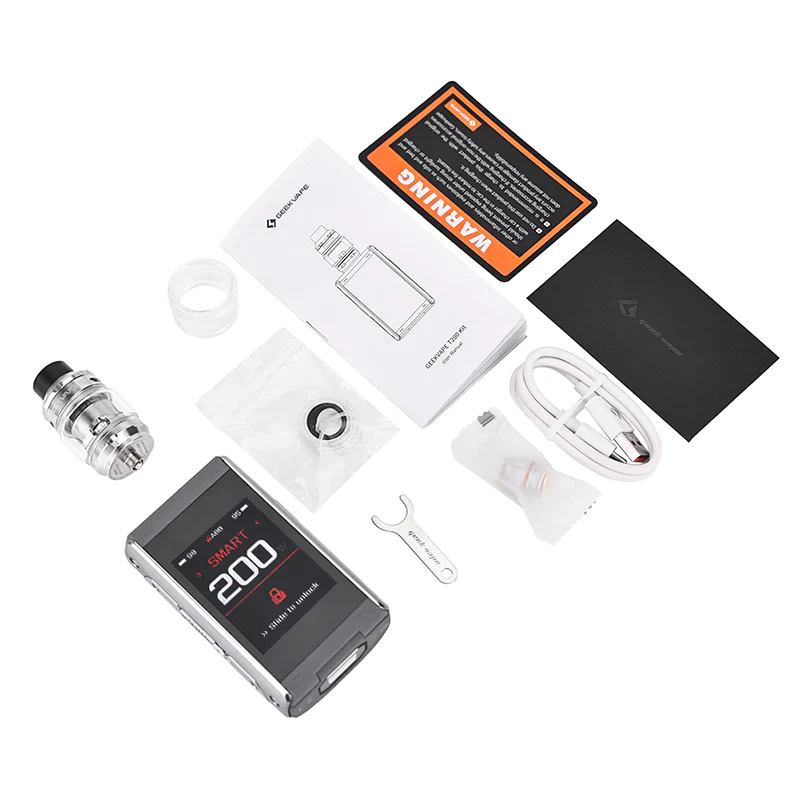 4 UI THEMES AND WALLPAPERS TO CHOOSE FROM 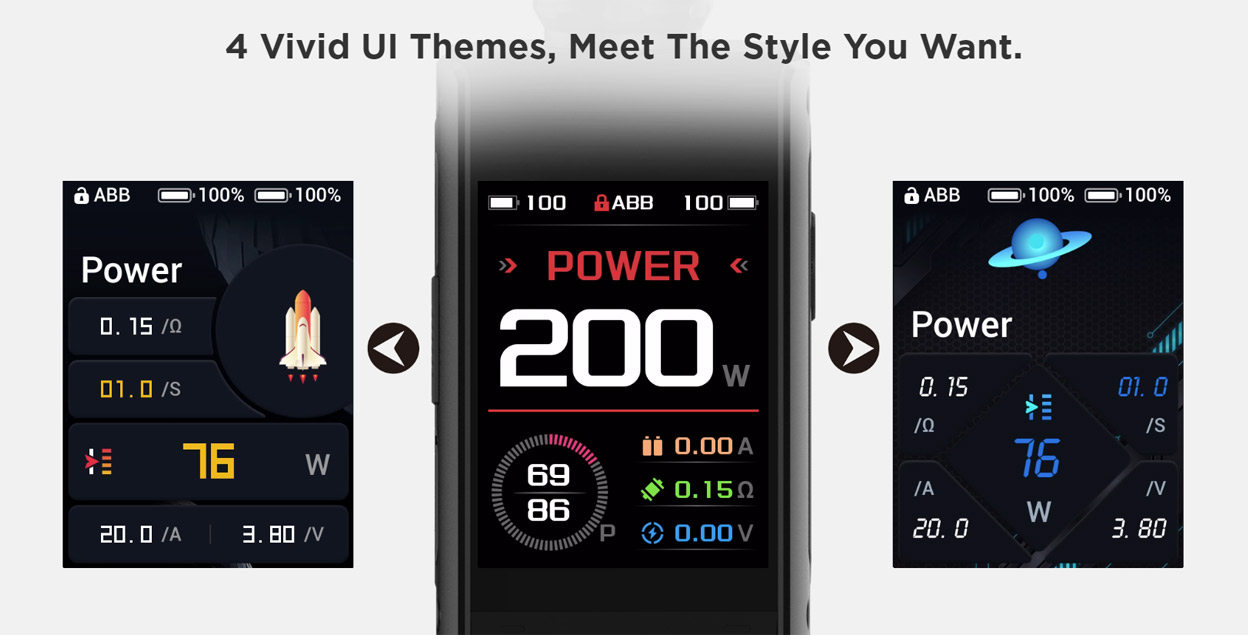 
Geekvape has always been very good with their presentation and packaging and it continues with this kit. A slide box contains the T-200 with all your paper information of owners manual, 2 warning cards and warranty card in a black cardboard envelope with gestures instructions printed on the front for quick reference laying on top. Under the mod is the 2021 Z-Sub-Ohm Tank, 2nd coil, charge cord, spare bubble glass tube, coil removal assist tool and spare parts bag. The first thing that stood out was how large the display screen was ( 2.4 inch ). The t-200 is a full sized mod and not a lightweight, it feels solid and being a IP68 rated mod I'm sure that it is but we will find out. 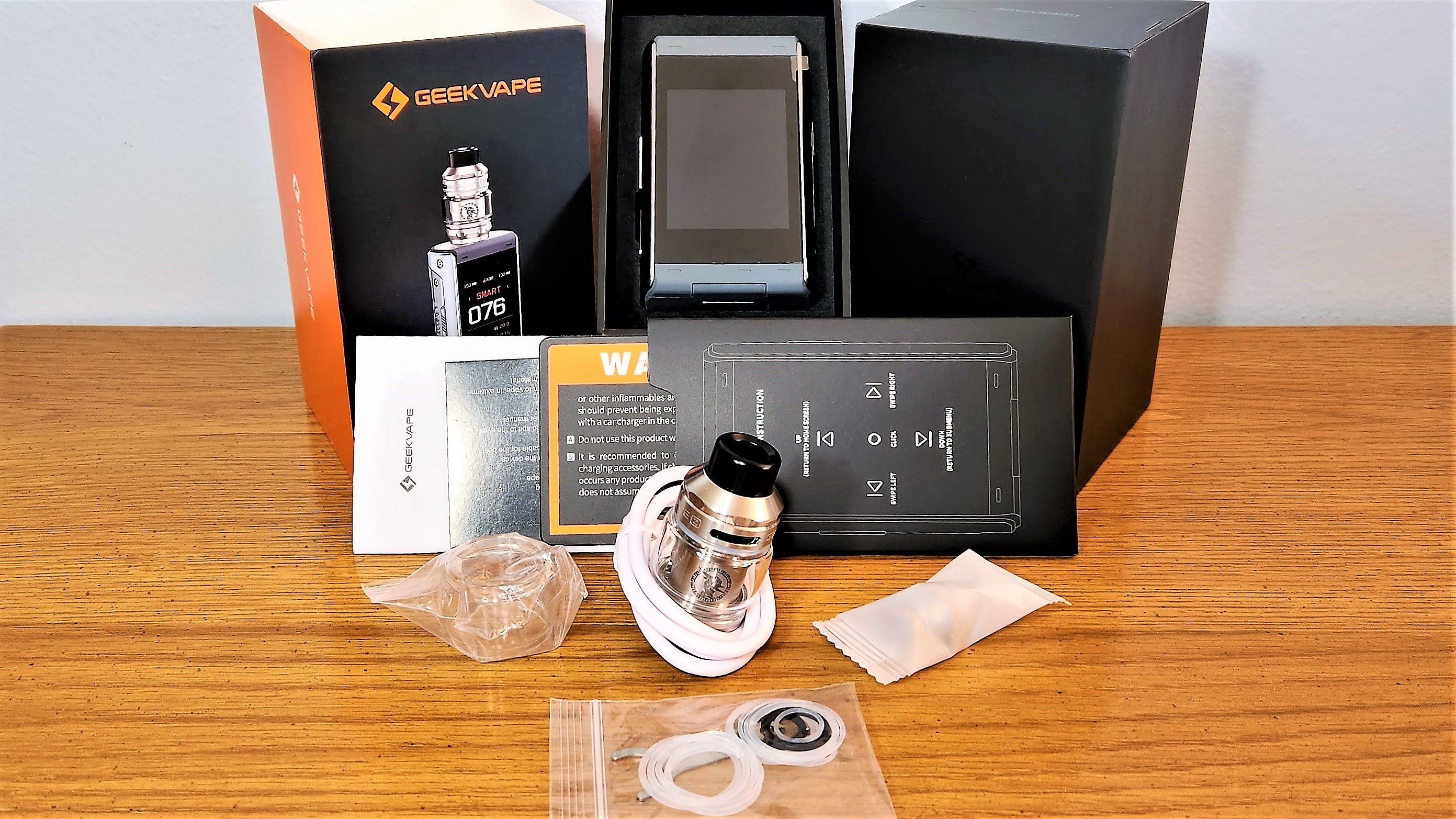 The Aegis mods of the past were known for toughness being IP68 rated to withstand drops and falls while being waterproof and dustproof as well. Usually they were heavily covered in a thick silicone rubber that really cushioned falls but the Aegis T-200 has very little silicone rubber surrounding it, most is mainly on the bottom battery door cover surrounding the door latch which is spring loaded and very stiff. 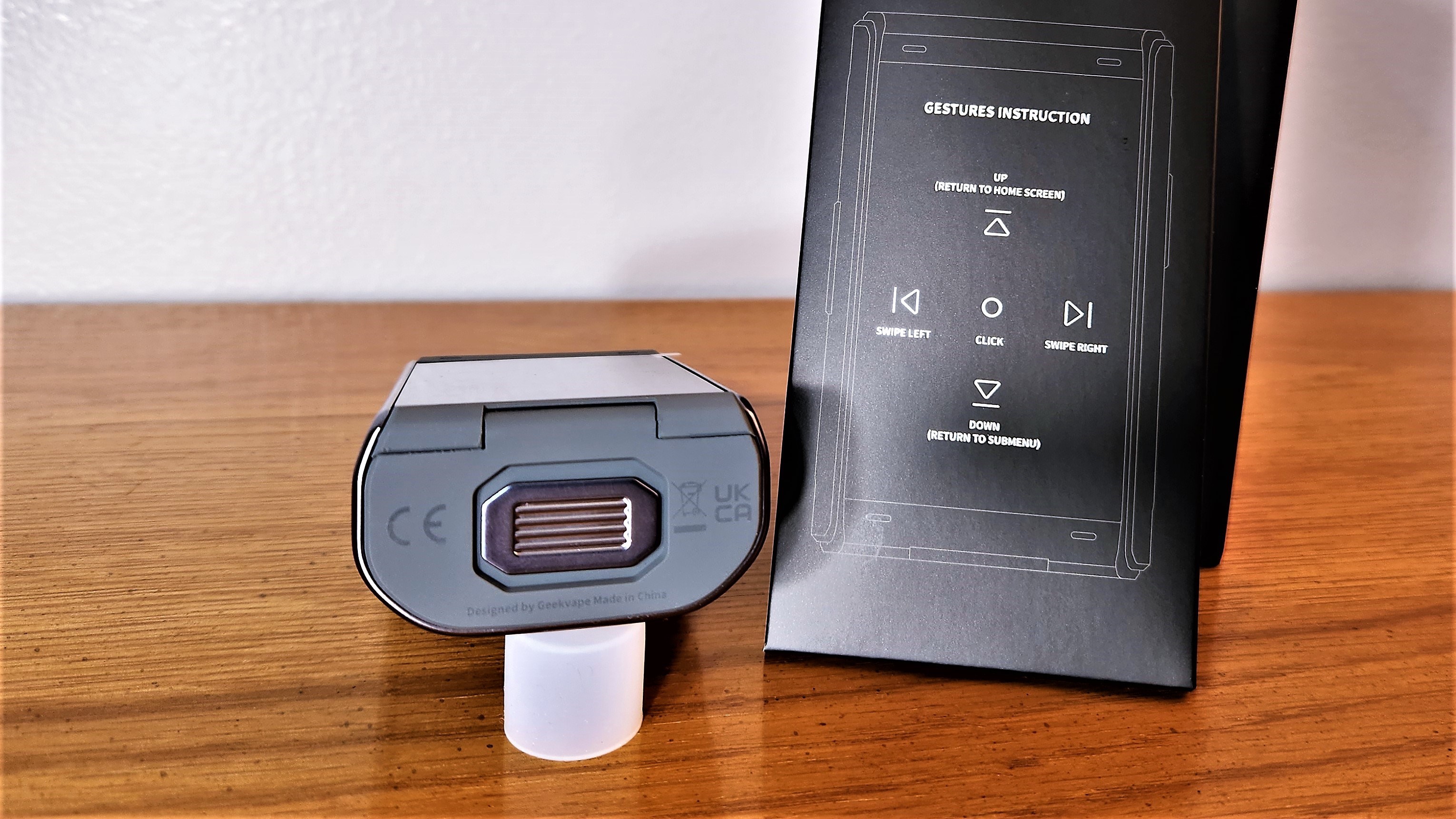 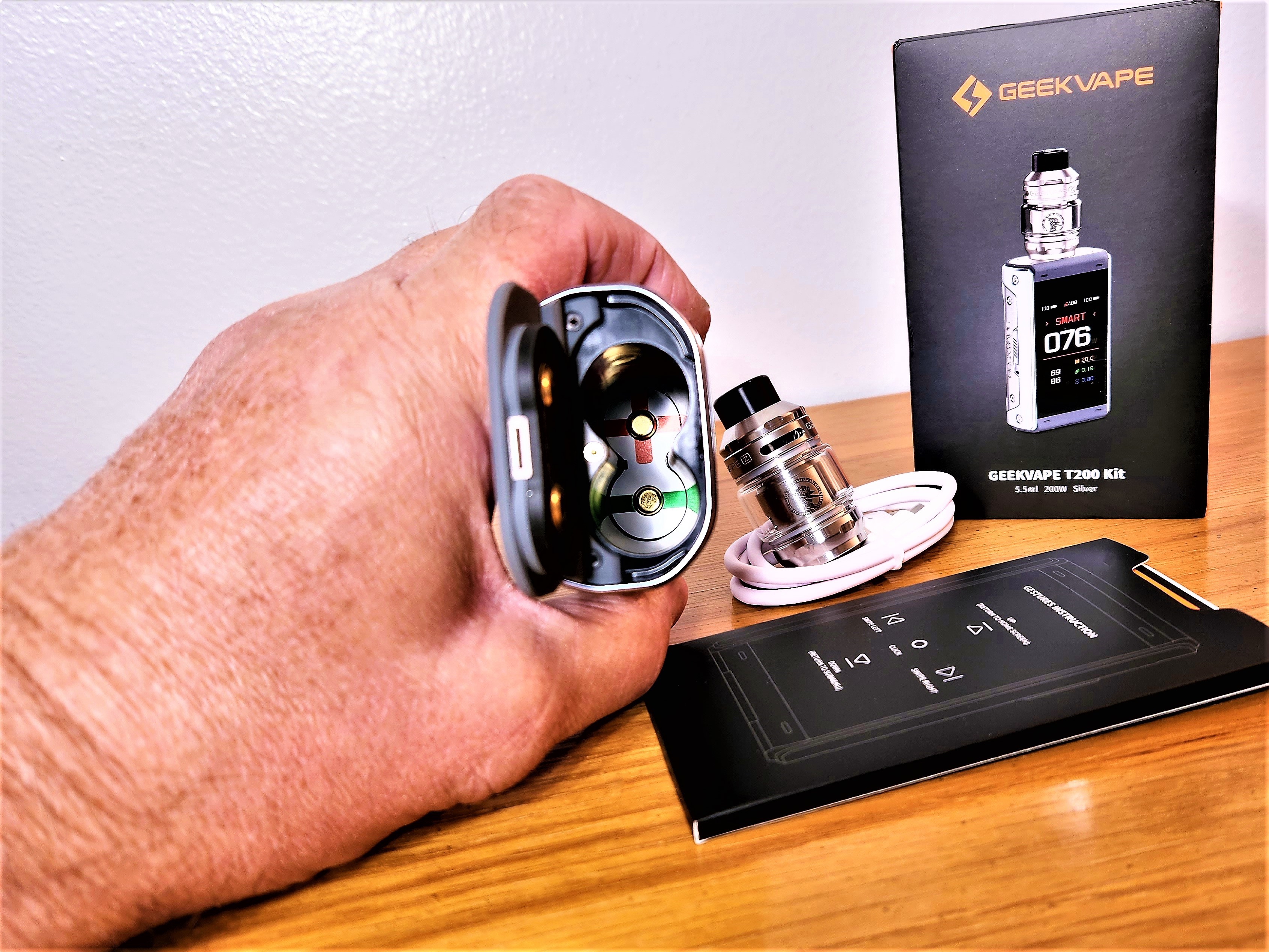 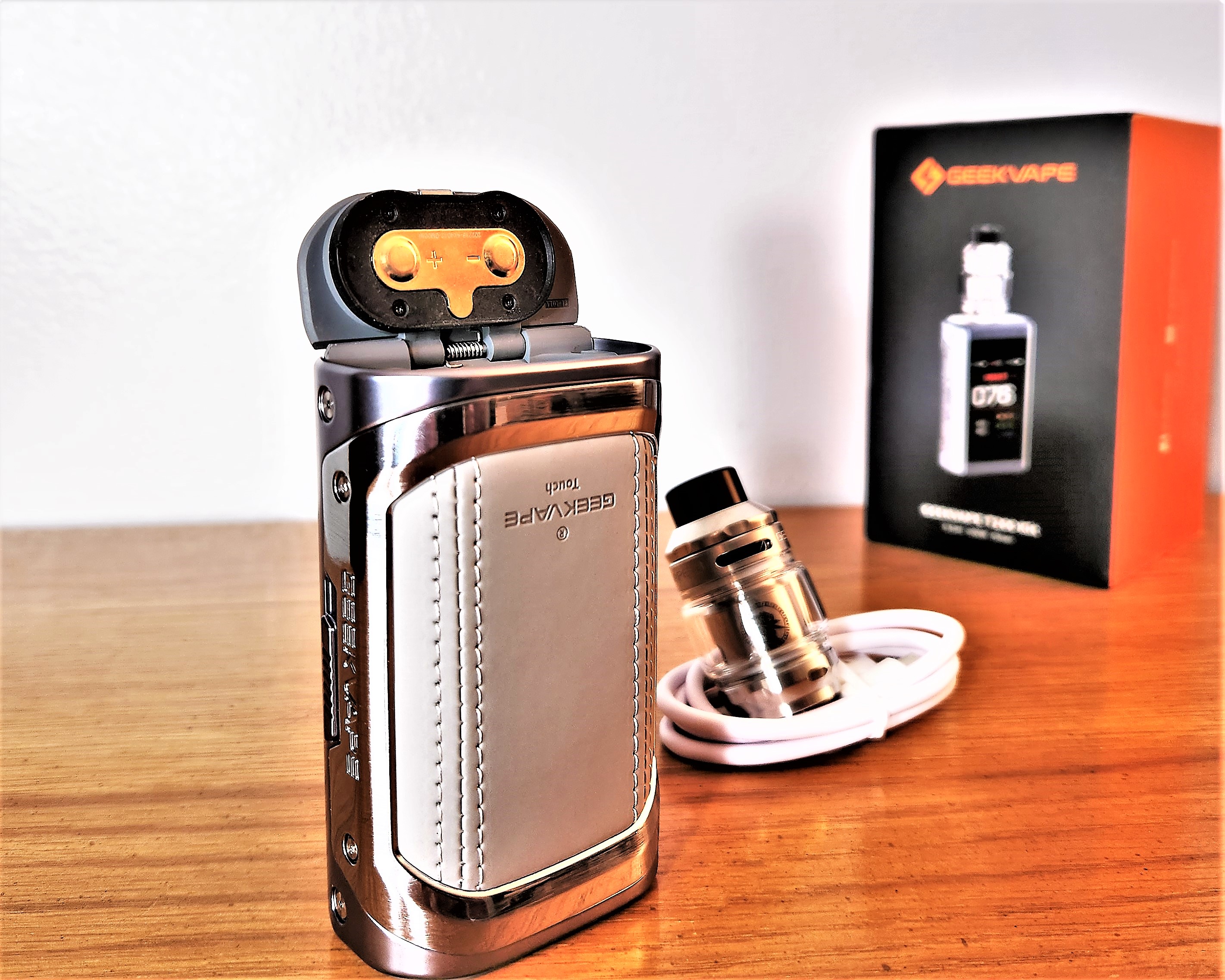 Turning out attention to the top of the mod you can see that it's not your traditional box mod shape but instead has a rounded backside with the front being straight. When attaching a atomizer you can see it won't be centered on the top because the top plate is installed on the silicone rubber further towards the back, if your going to use another atomizer a 25mm is the max looks wise. 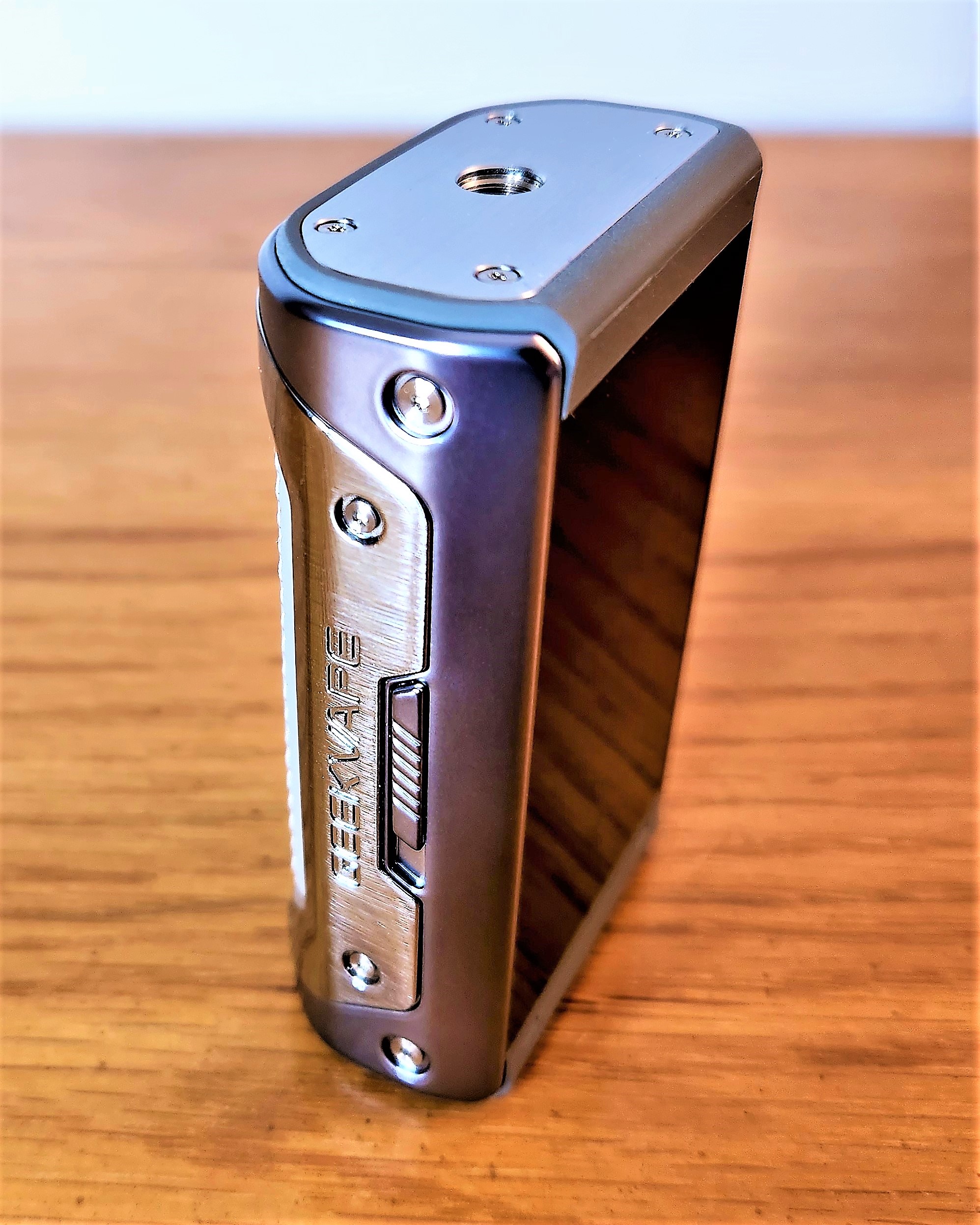 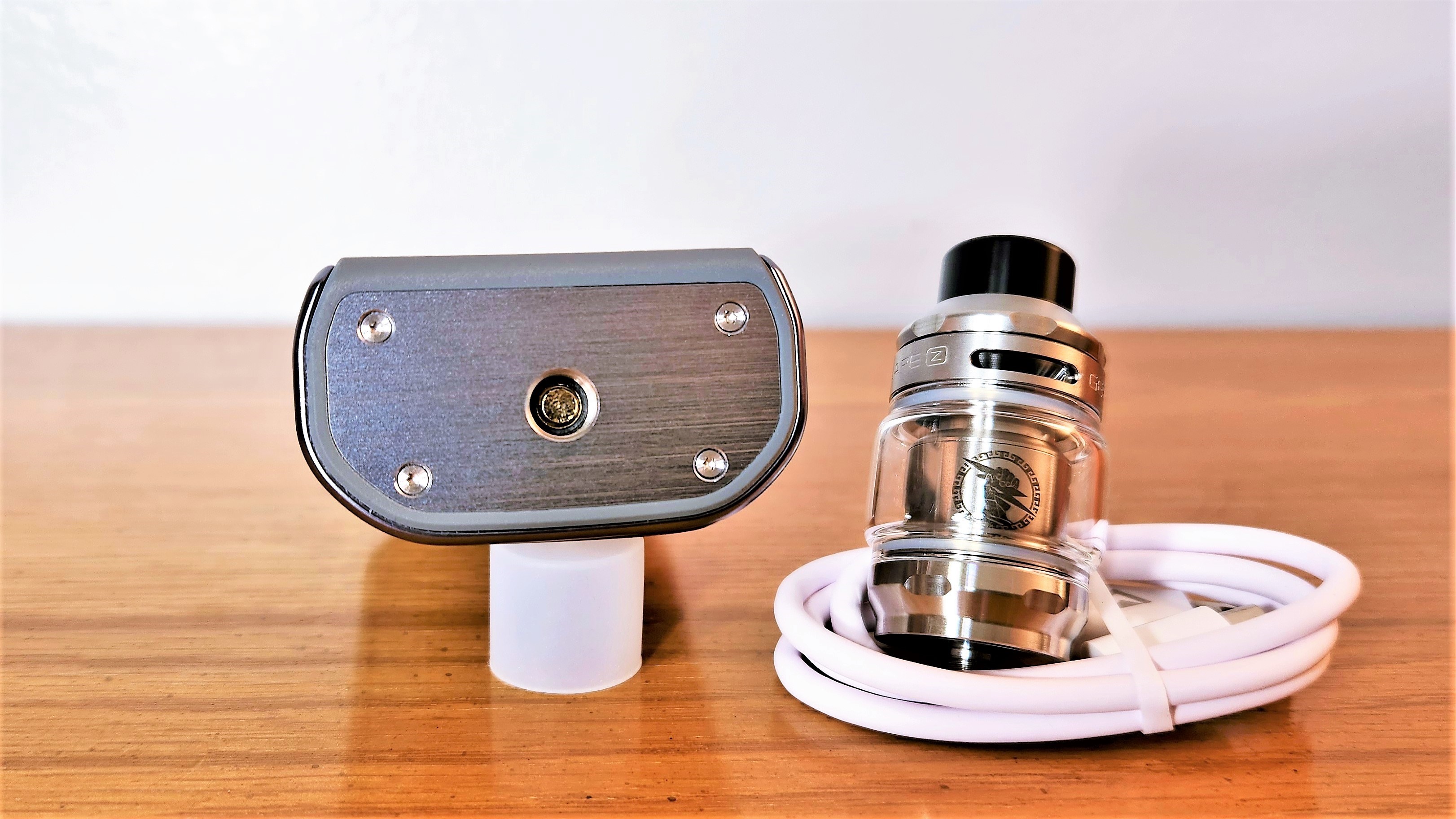 I won't be going into great detail about the Z-Sub Ohm (2021 ) Tank because I've covered it many times in past reviews but I will say I have never had a negative issue when using this tank. Both coils that are provided have above average flavor with your vape tasting sharp and full bodied while being fully saturated with flavor.

The Z-Sub Ohm ( 2021 ) tank breaks down very easily for cleaning that I suggest is done in a strainer or colander paying attention to O-Rings not coming off and going down the drain. I always give any new atomizer a bath in warm soapy water after pulling out the preinstalled coil. The coils used have 2 tabs that need to sit in 2 cutouts in the tanks chimney. Having a east 1/4 opening top cap is nice along with very large and wide fill ports. This tank is a top performer in it's field. 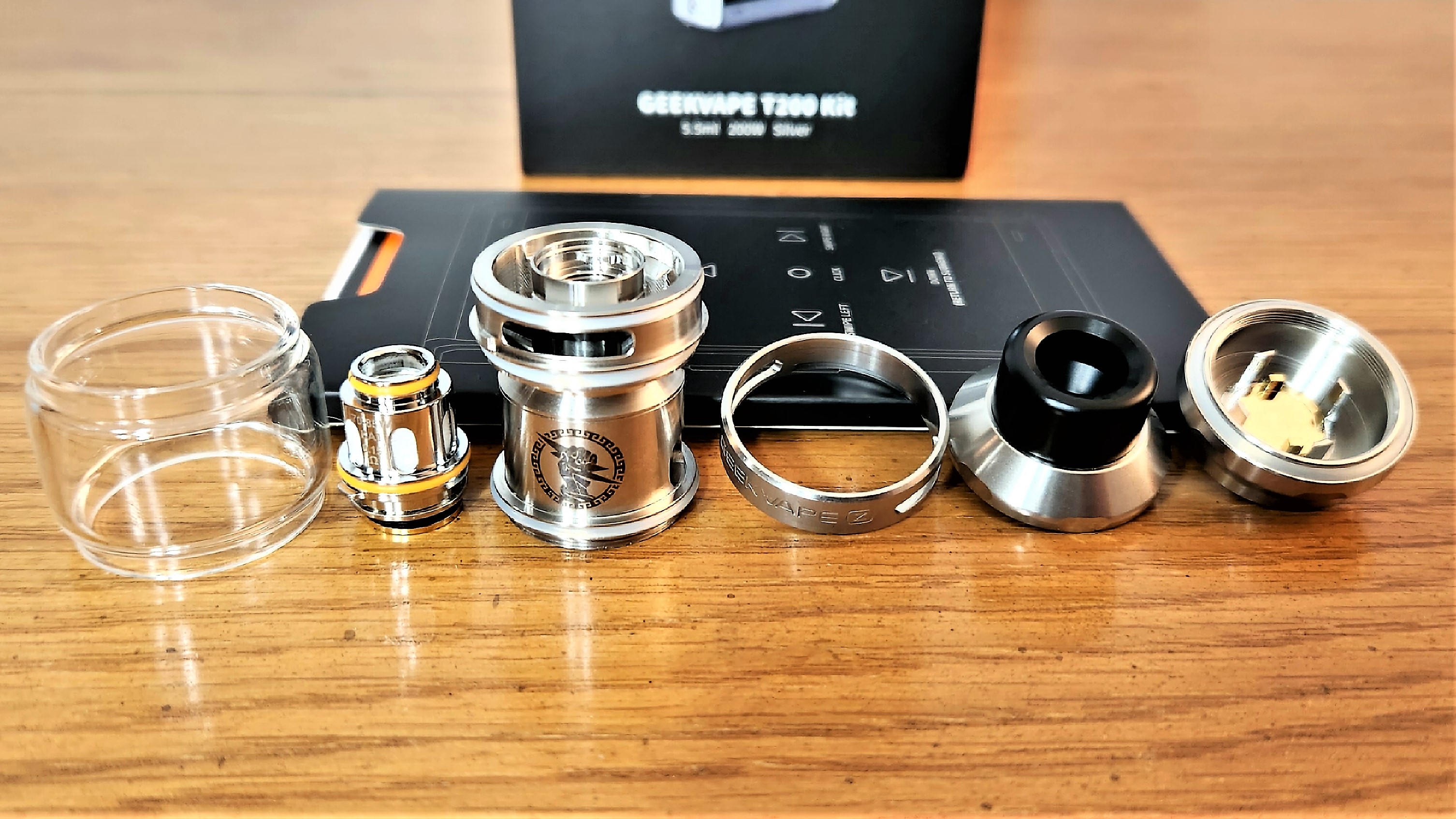 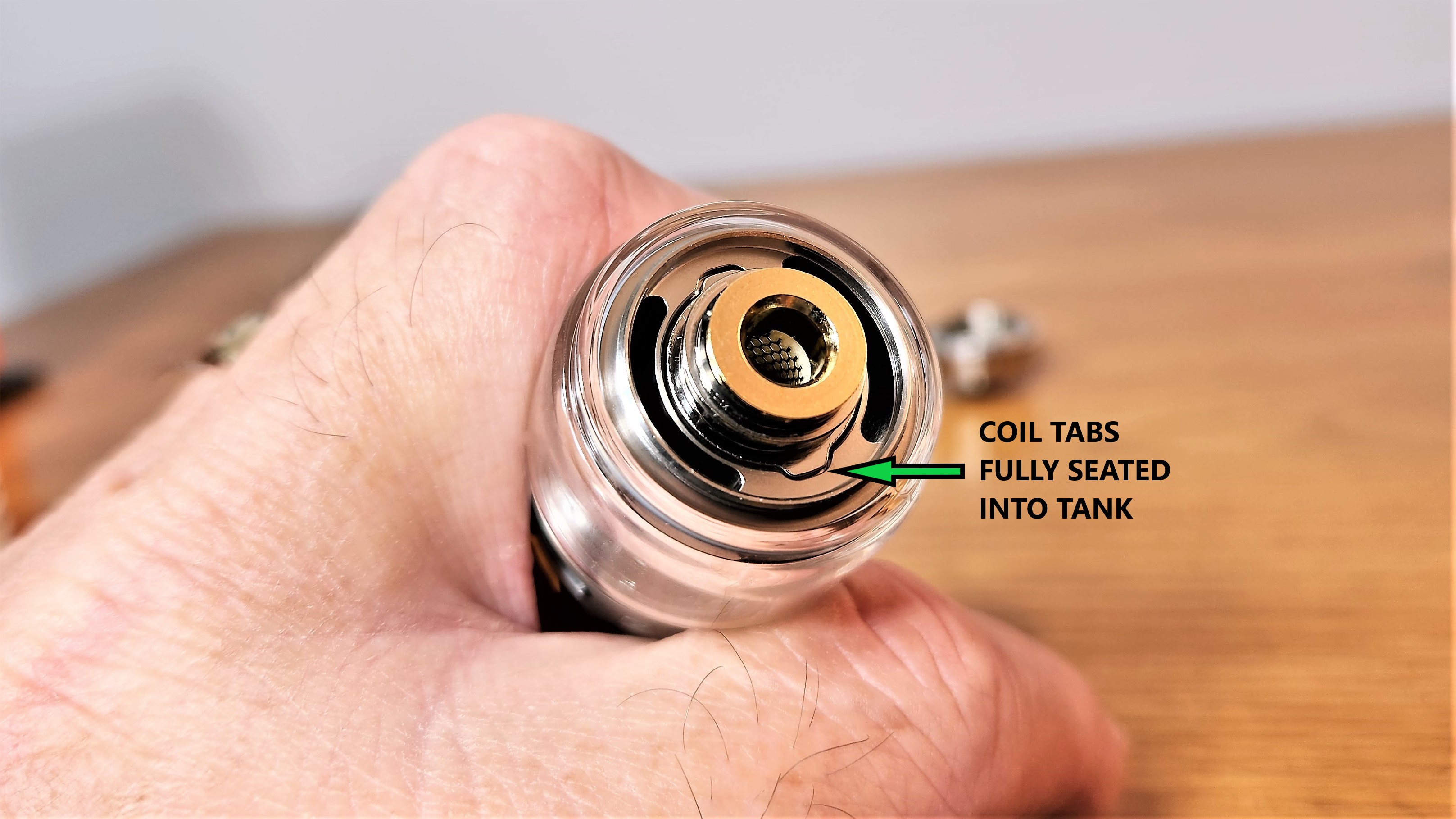 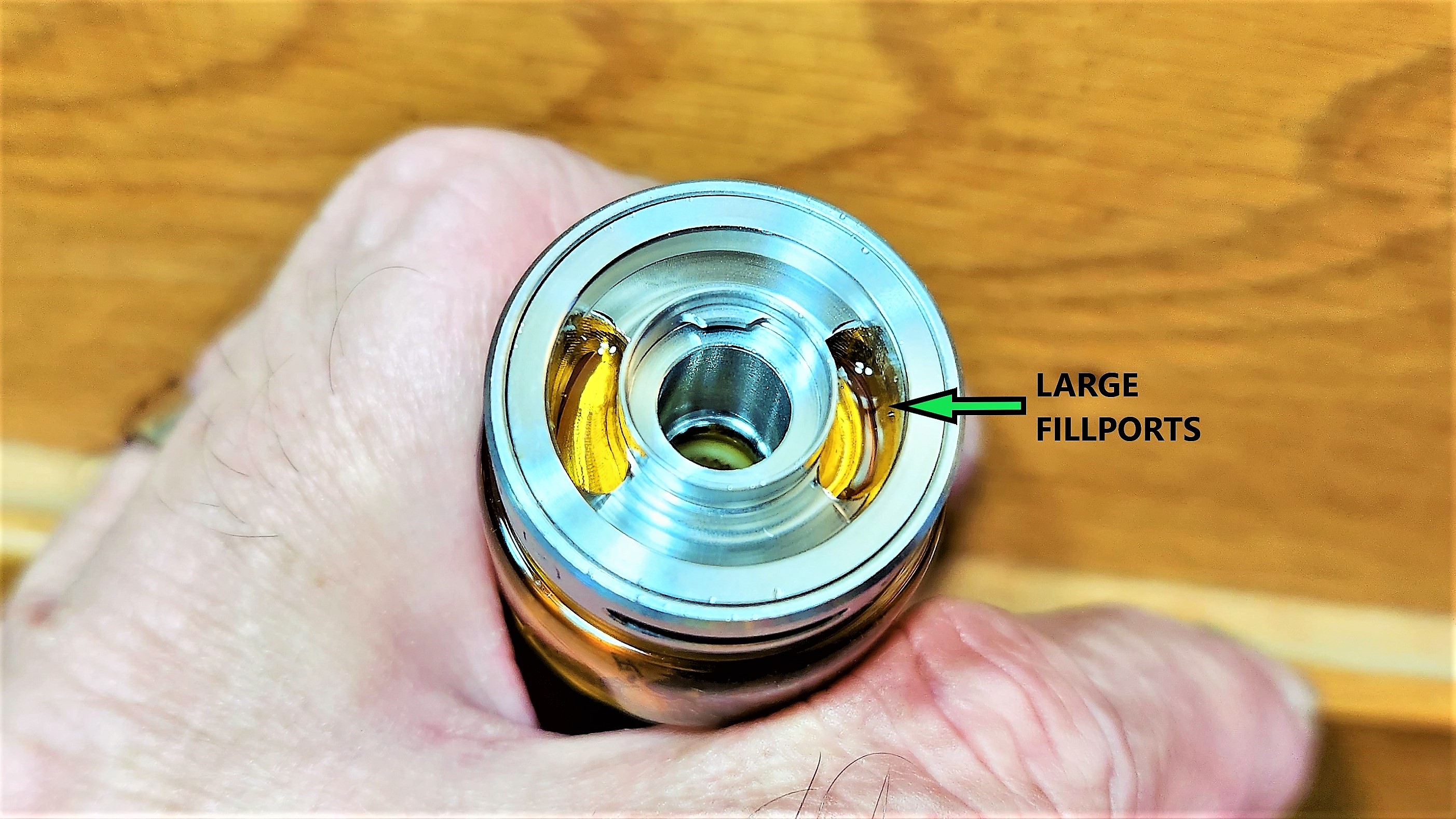 The front of the device is almost all screen while the back has a very nice soft leather inside a metal bezel that makes up the back side. It has some cushion feel to it and the double stitching on both sides add a bit to it's attractive appearance, GEEKVAPE TOUCH is lightly embossed at the bottom. 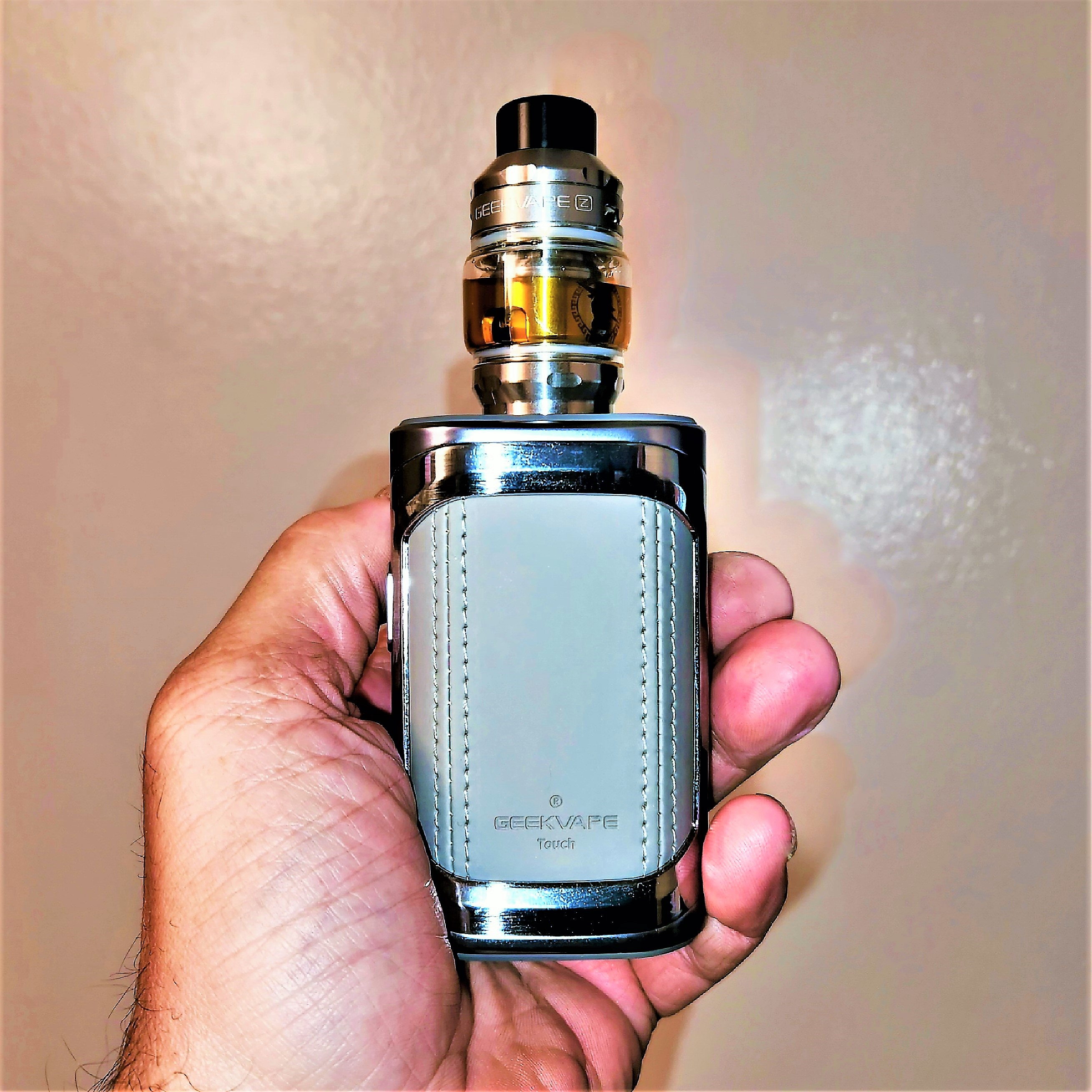 On 1 side of the device you have the large fire button with the USB-C charge port located towards the bottom with a lightning bolt embossed just above it, surprisingly there is no cover for the charge port as it's protected from water internally.

With the different shape the device has a little hand adjusting is needed when firing it if you want the display screen facing outward. In my right hand the thumb firing method has to be adjusted because the fire button sits a little low on the device. In my left hand finger firing works just fine. 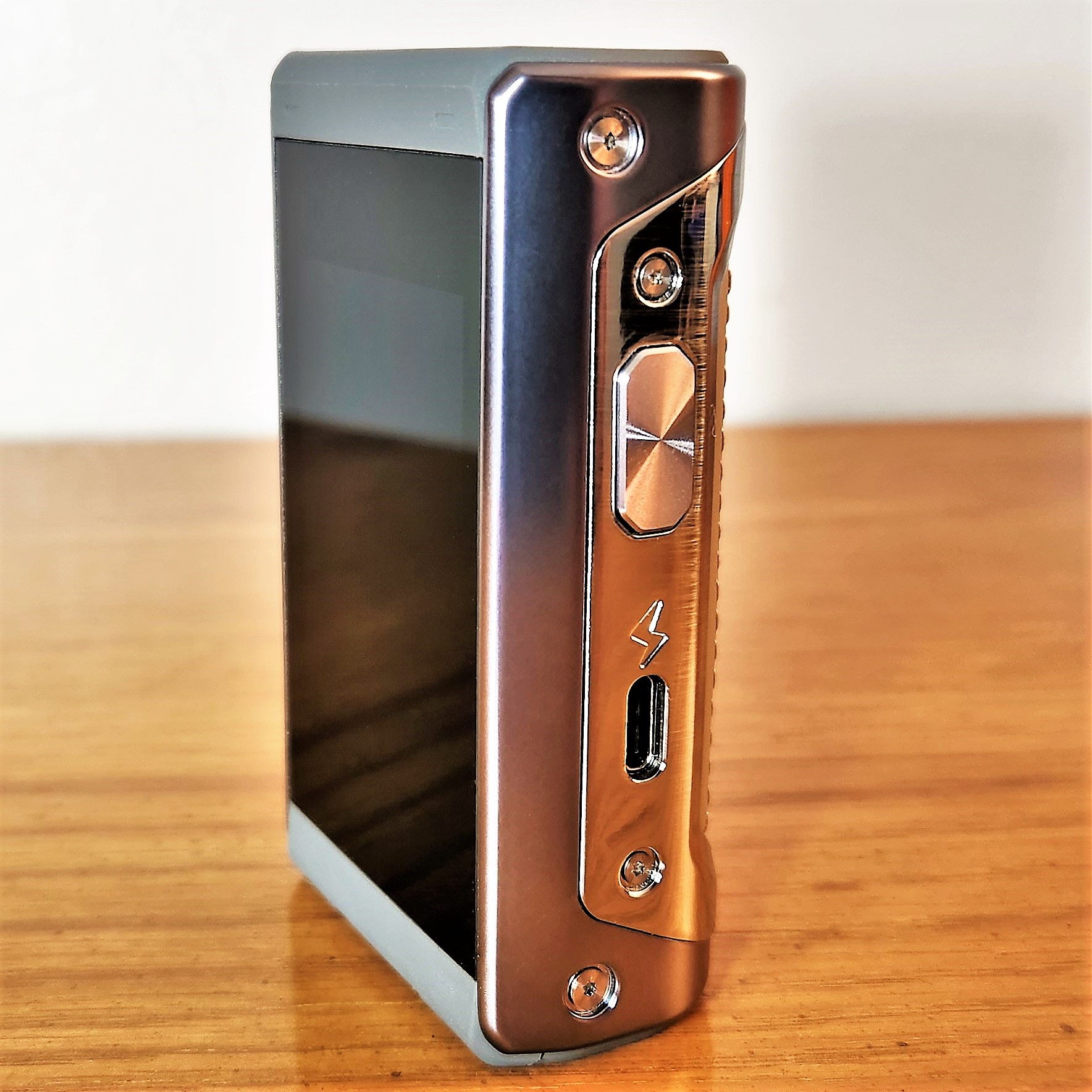 On the other side is a locking switch that locks the entire device from firing and doing any adjustments, I'm so glad Geekvape is continuing with this locking switch because it simplifies things when storing the device in a pocket or bag above the switch GEEKVAPE is embossed.
••• 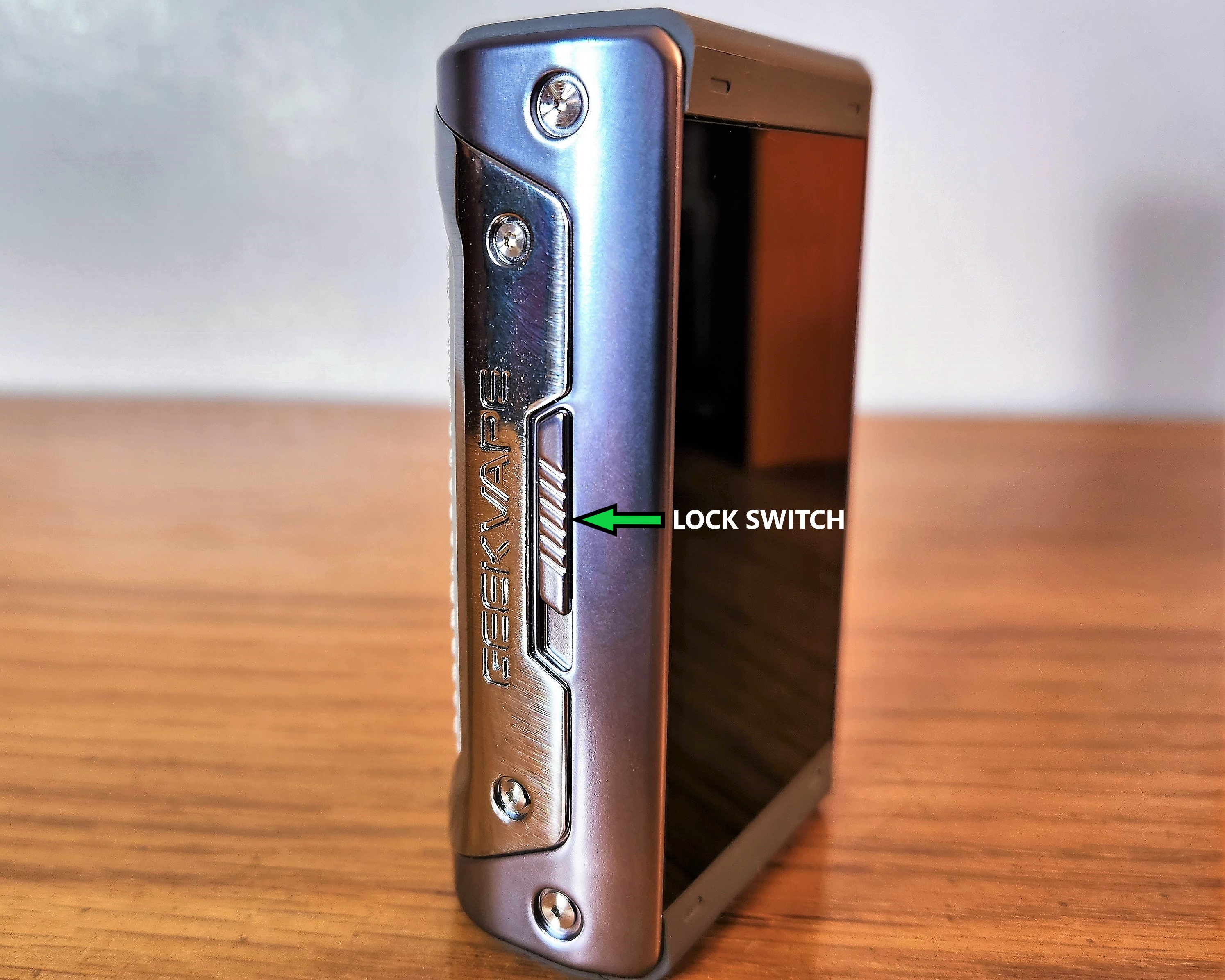 Turning the device on/off is done with the usual 5 quick presses of the fire button and when it powers up it defaults to the smart mode which is one of quite a few power modes on the T-200. The other power modes are straight power, TC-SS, TC-TCR, VPC and Bypass giving you 6 power modes to choose from. The display screen is massive with bright and vivid colors, to make any adjustments a simple swipe from side to side or up and down is all that's needed. When locked a locked padlock symbol is displayed a unlocked symbol lets you make adjustments. 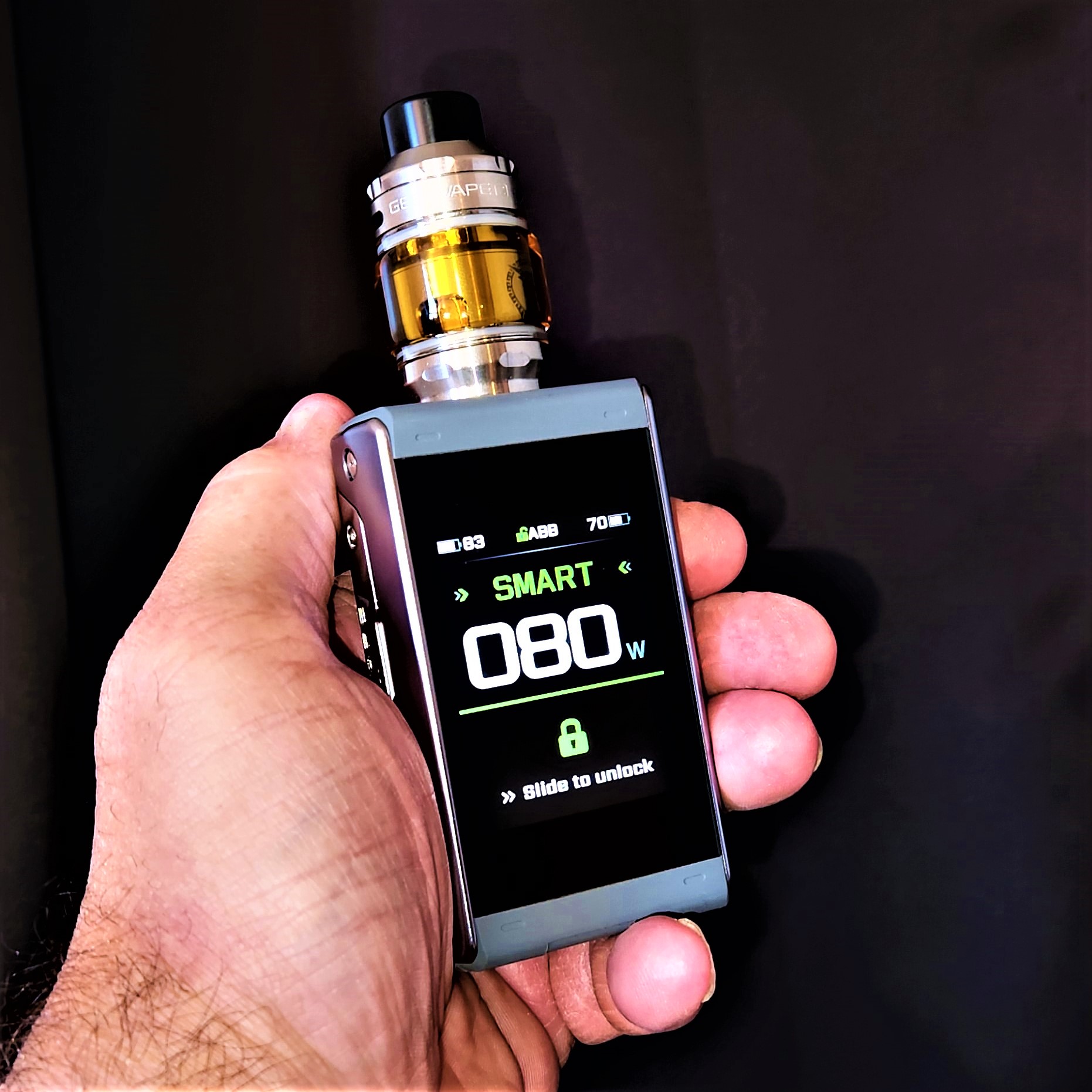 Wattage and or temperature adjustments are done in 1 watt increments and can be a bit time consuming if making very large adjustments in wattage or temperature, the device responds very quickly and there is very little hesitation if any using the touch screen, when finished with your adjustments just touch the OK symbol to lock in your settings. 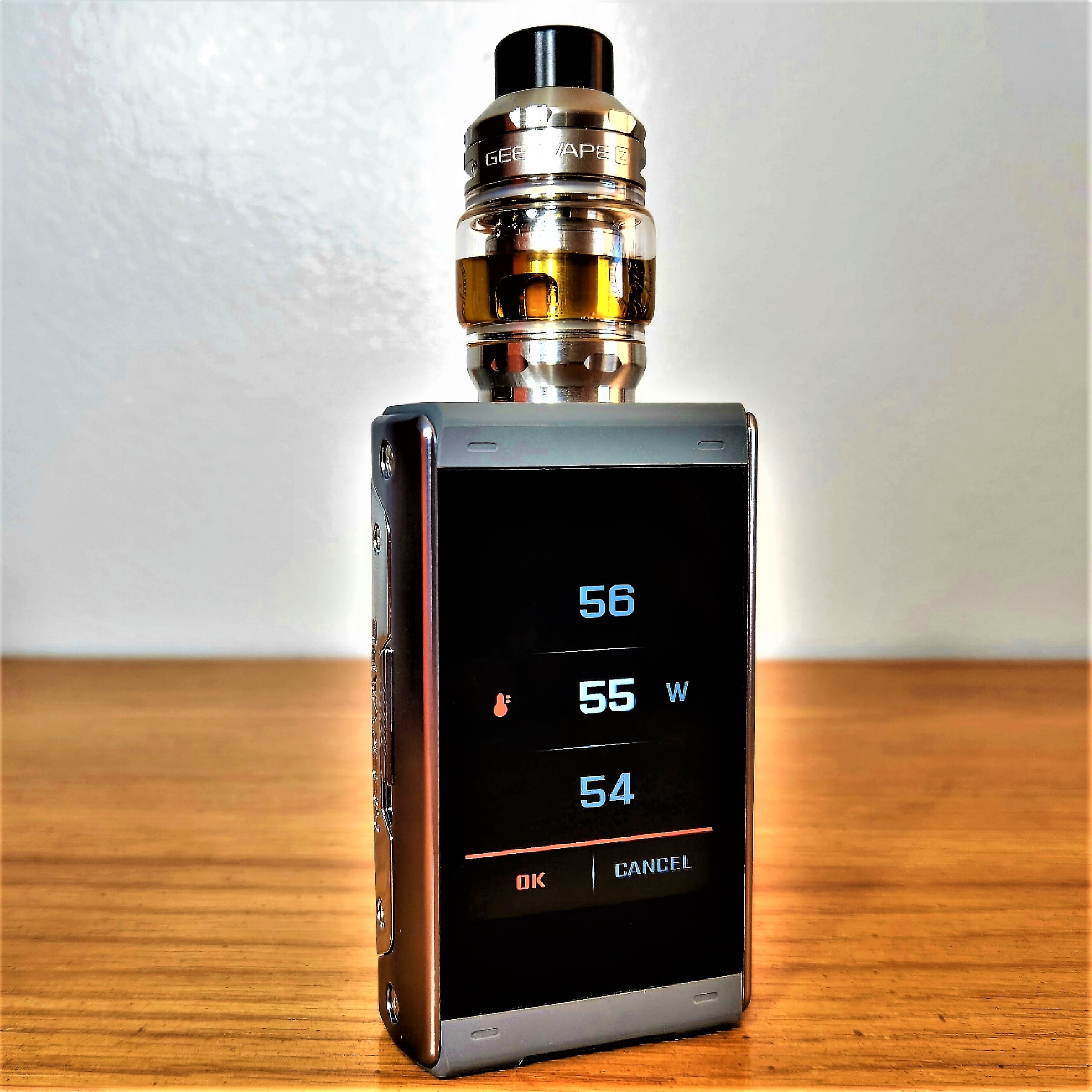 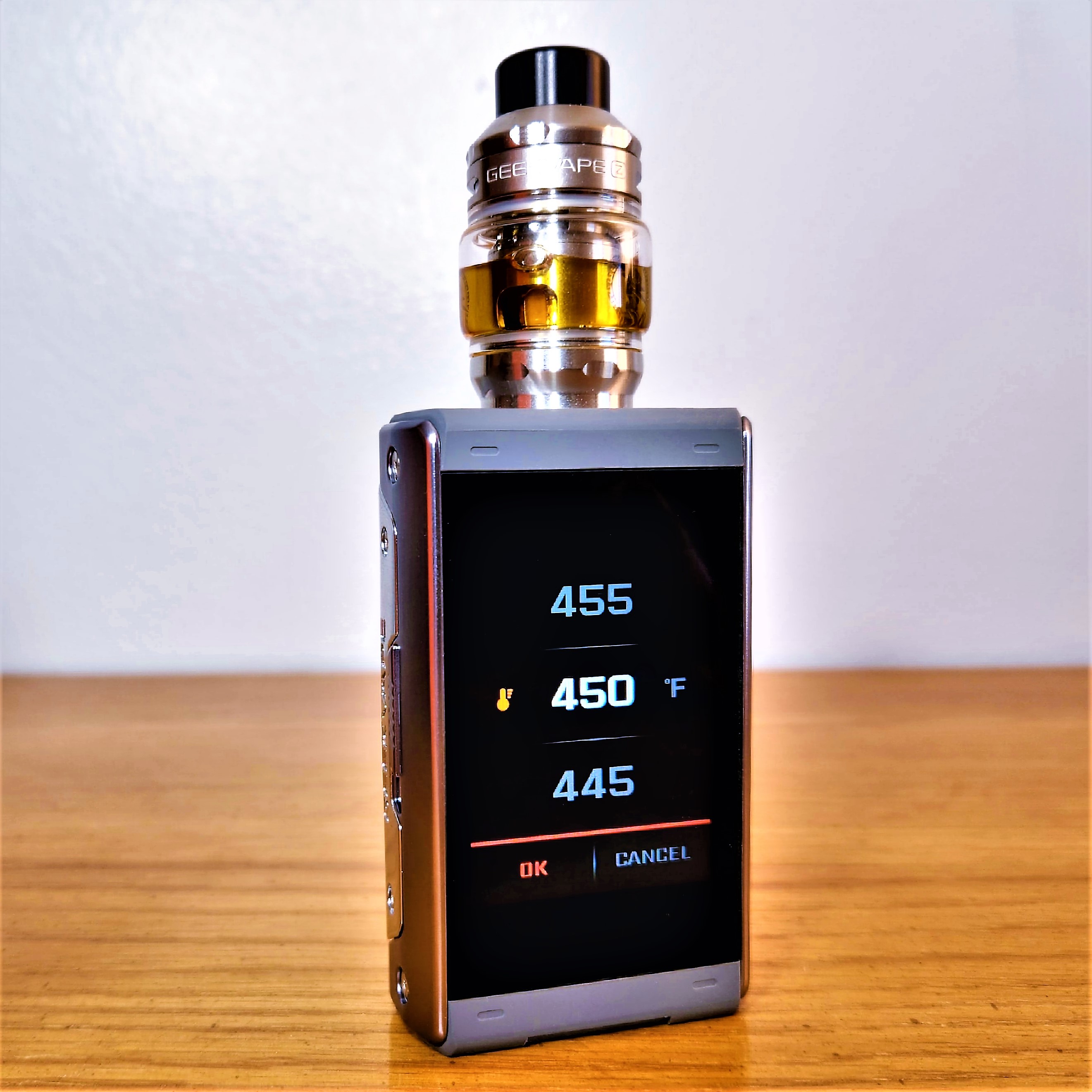 The first screen that opens is your choice of power modes and the settings for adjustments of themes, wallpapers, brightness, reset, puff clear and to see what version in on the chipset. If you choose professional the temperature modes, VPC and bypass modes are displayed. While the settings screen as all the screens are perfectly laid out being large and easy to see. 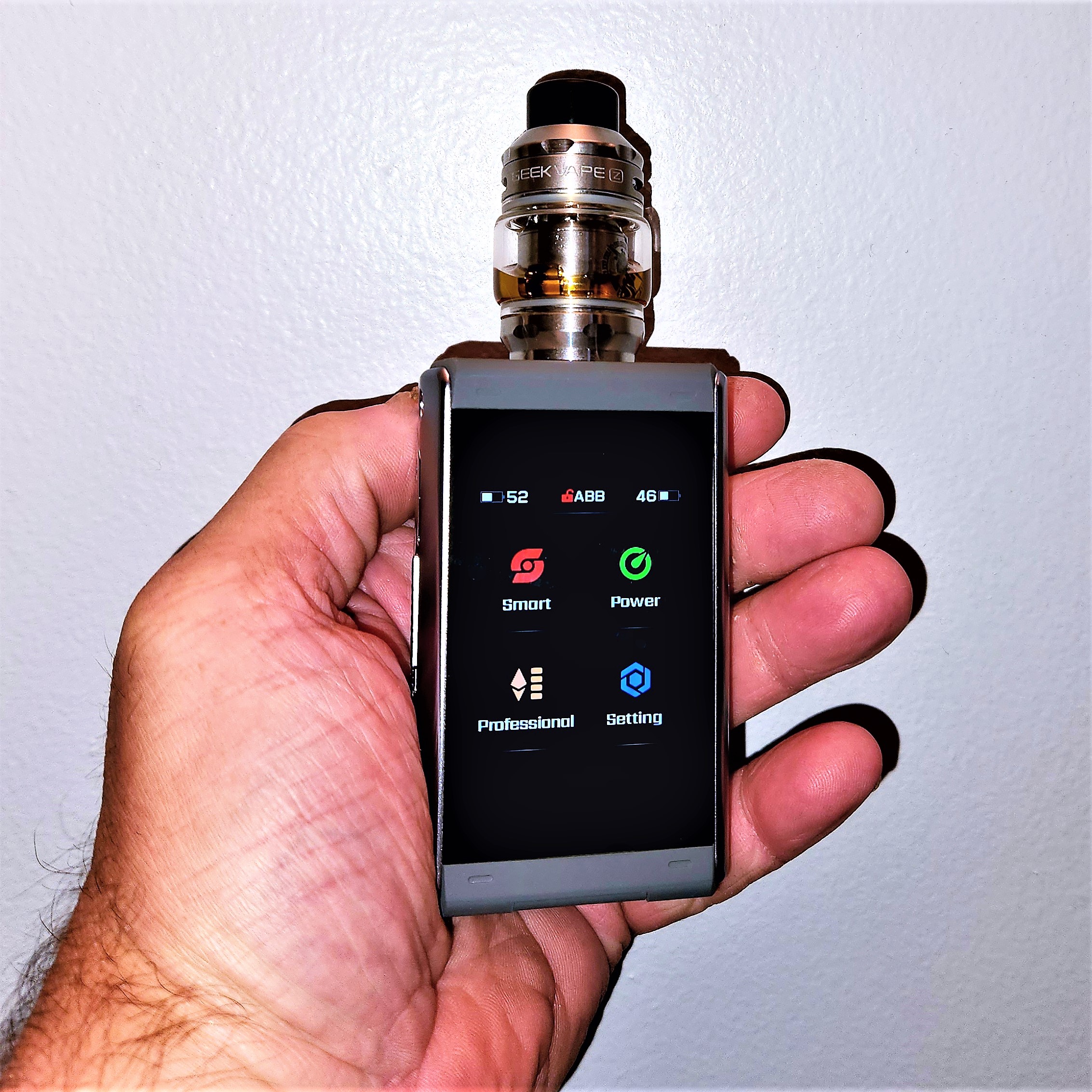 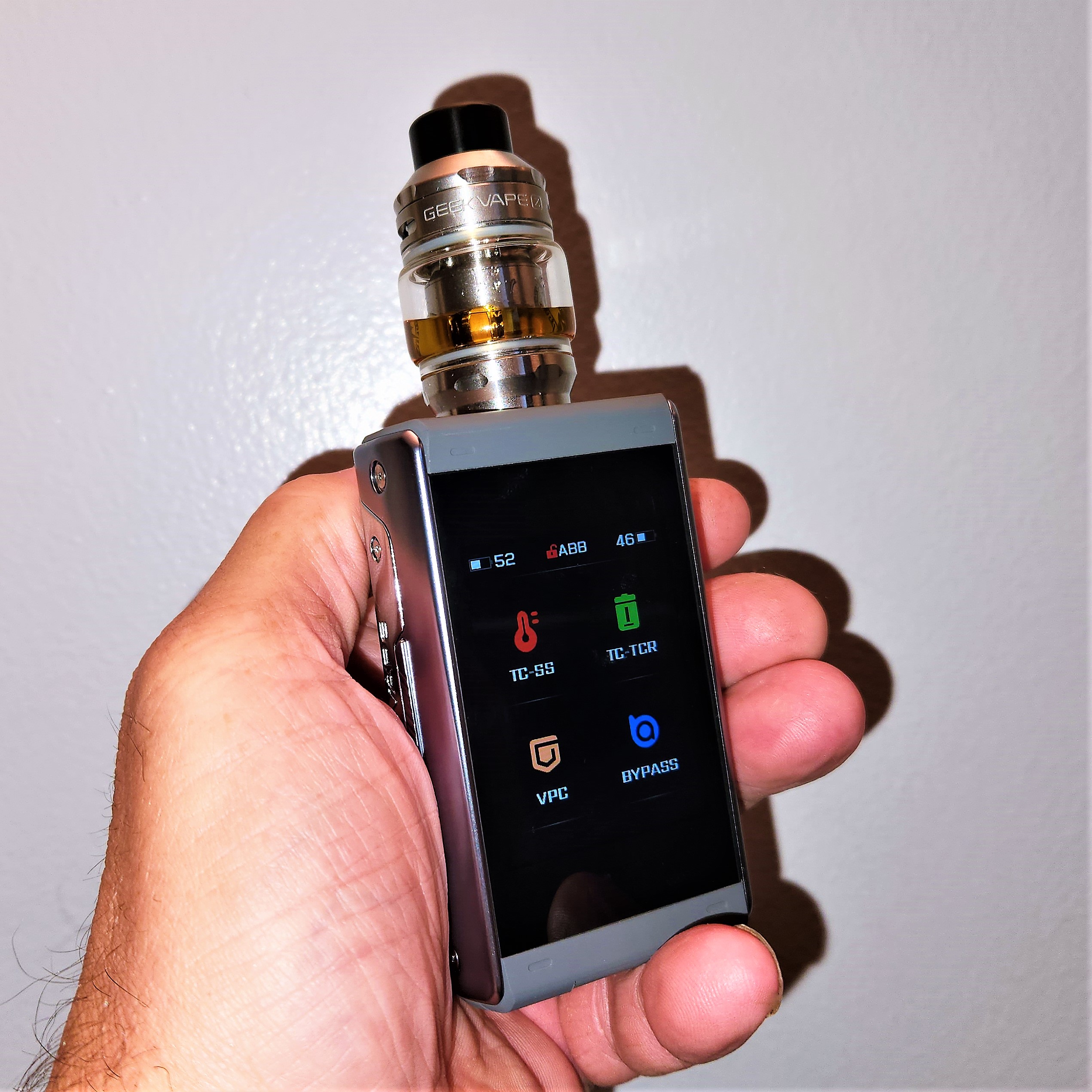 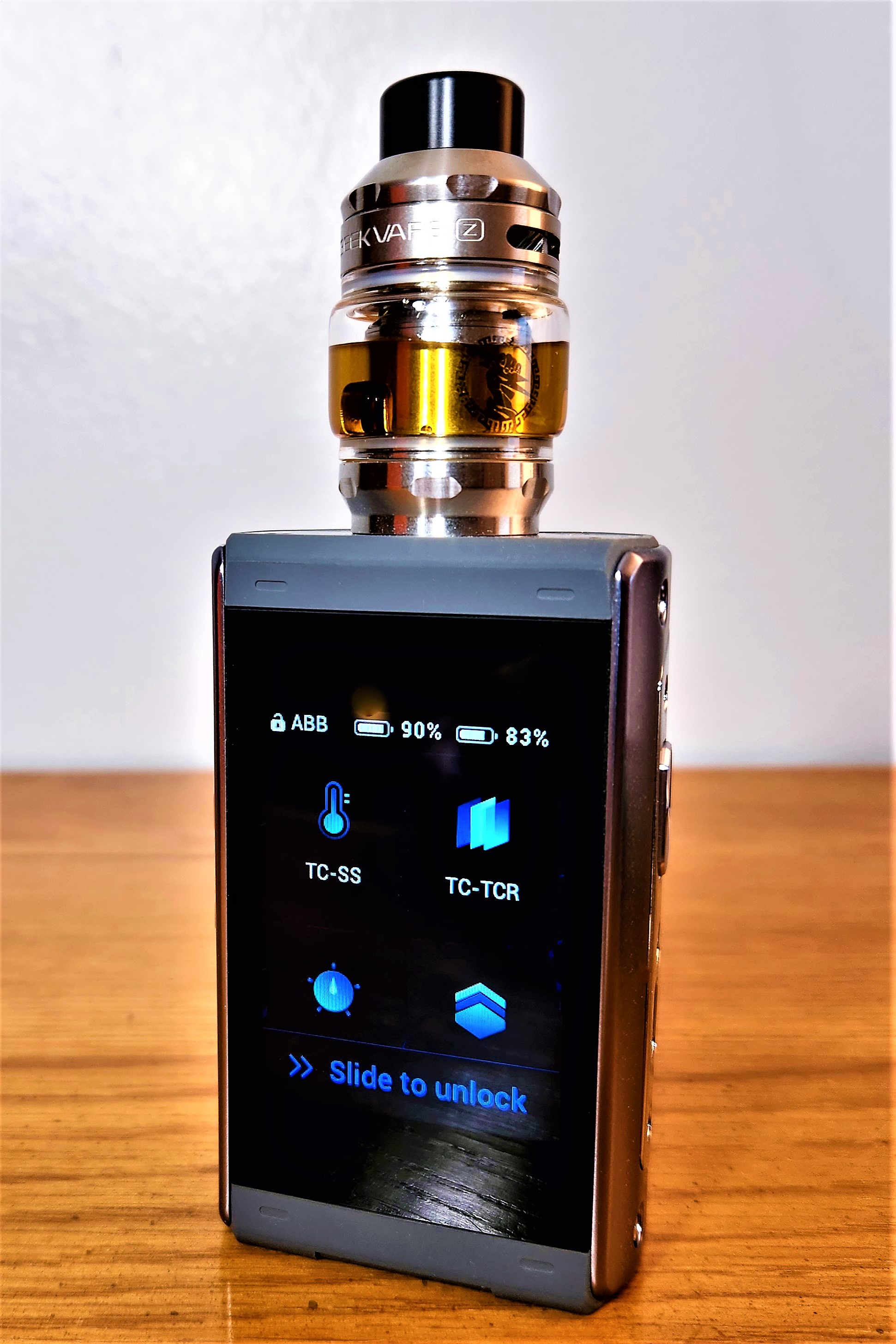 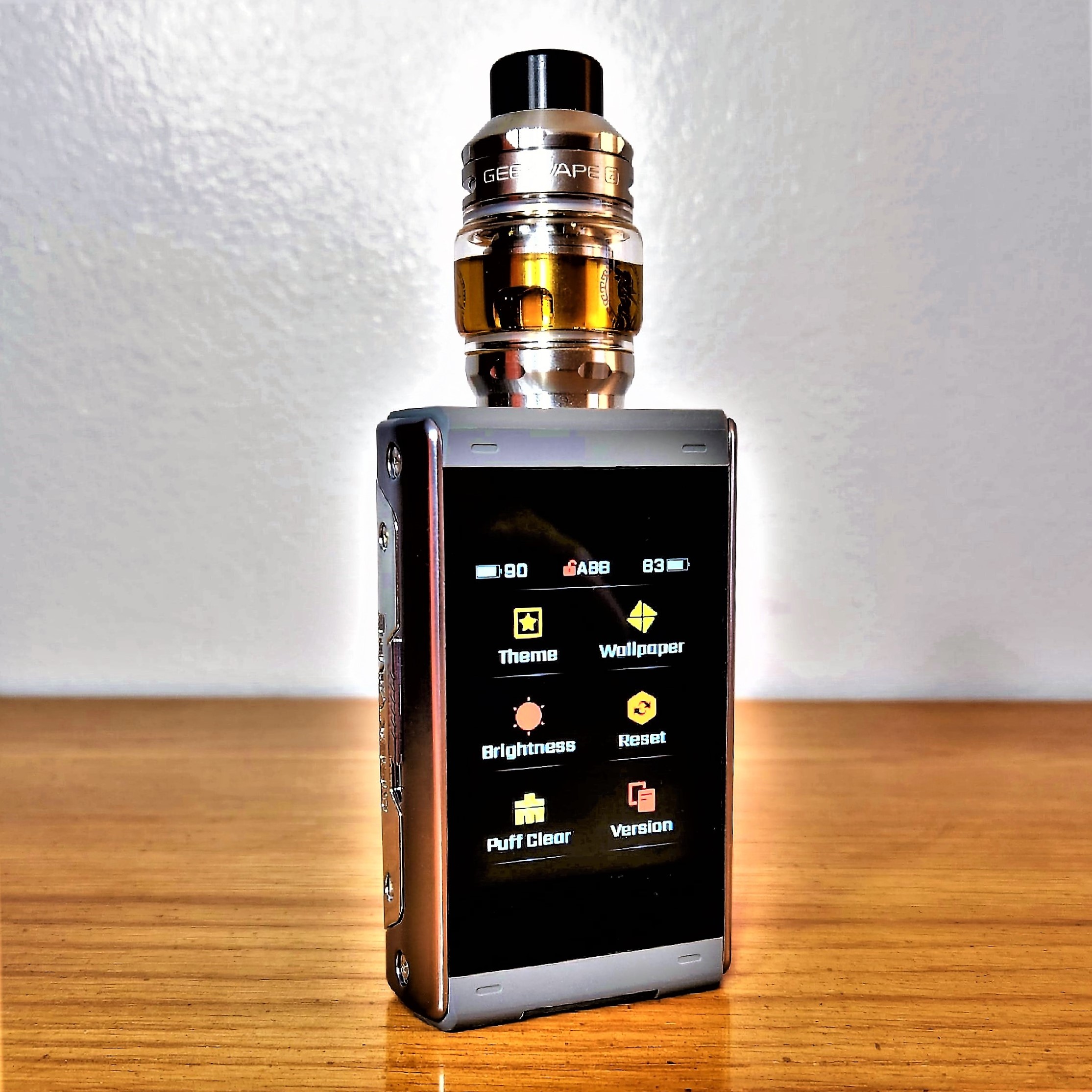 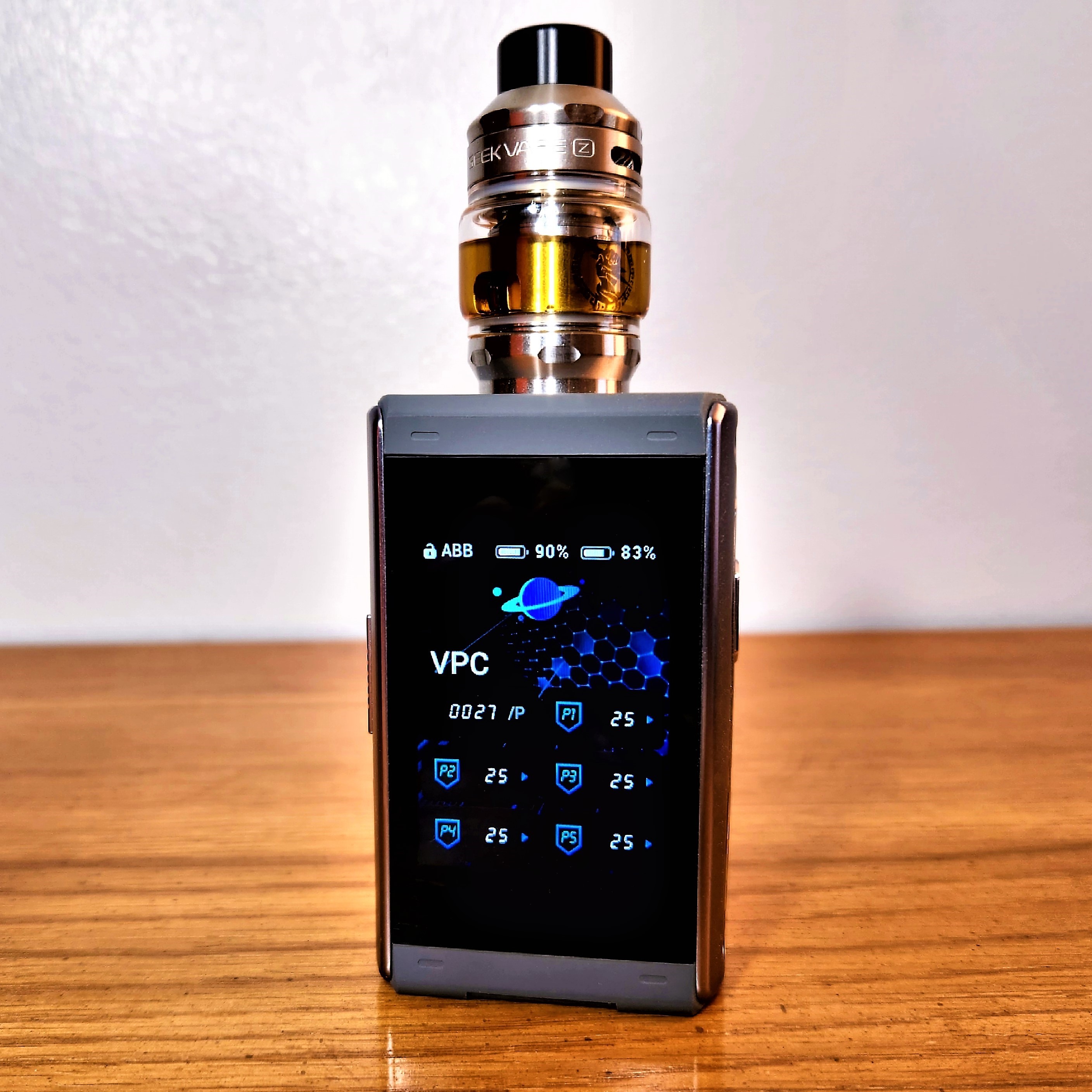 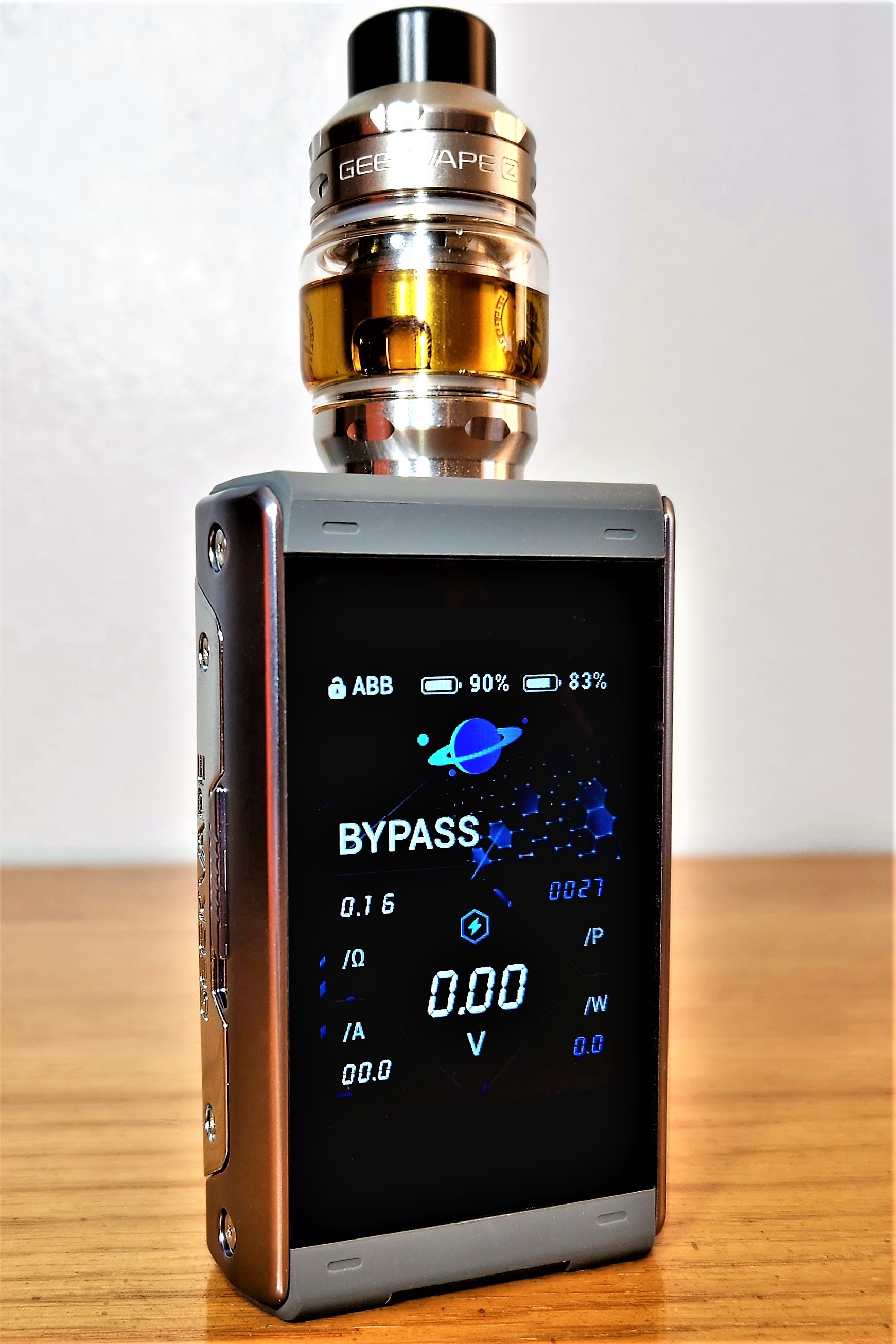 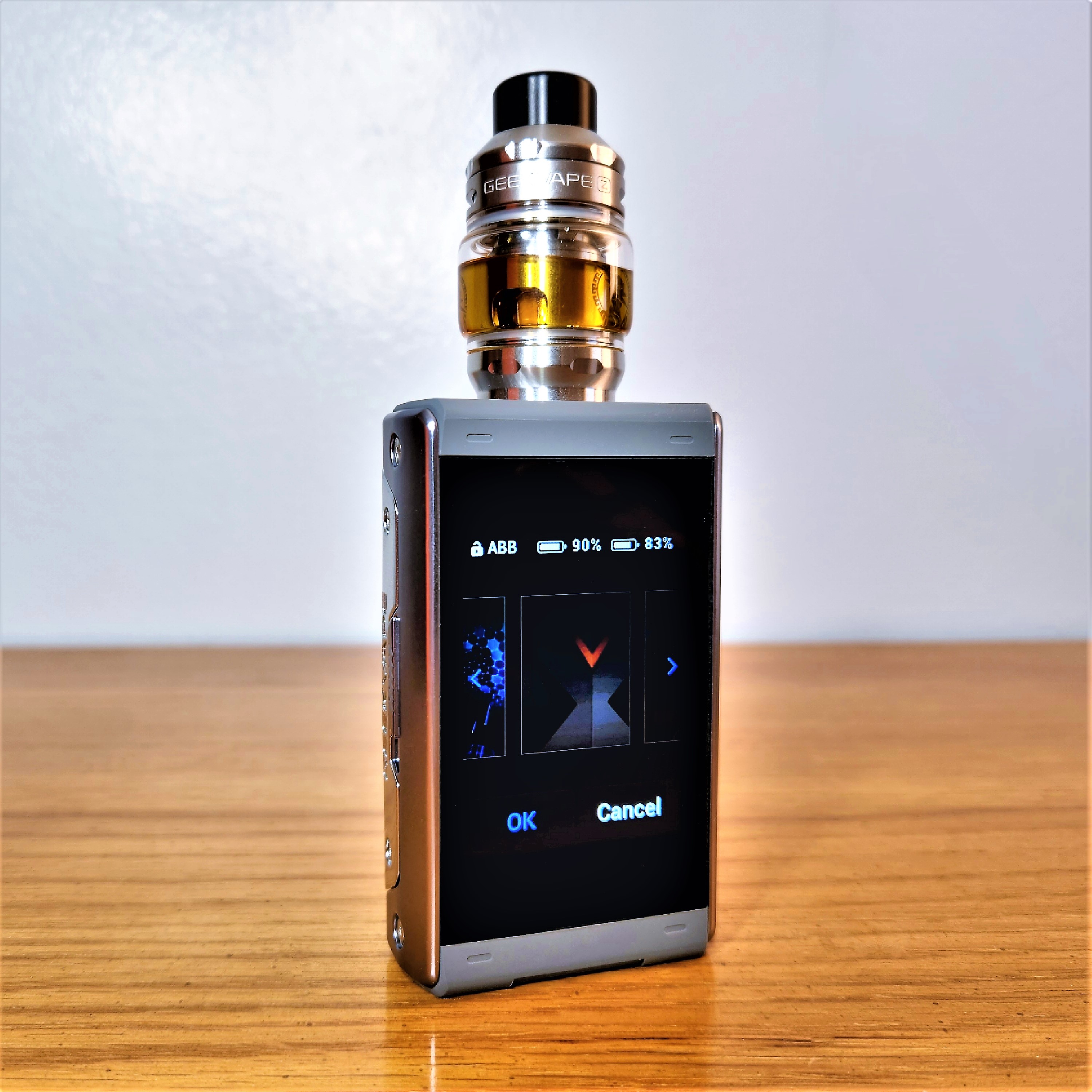 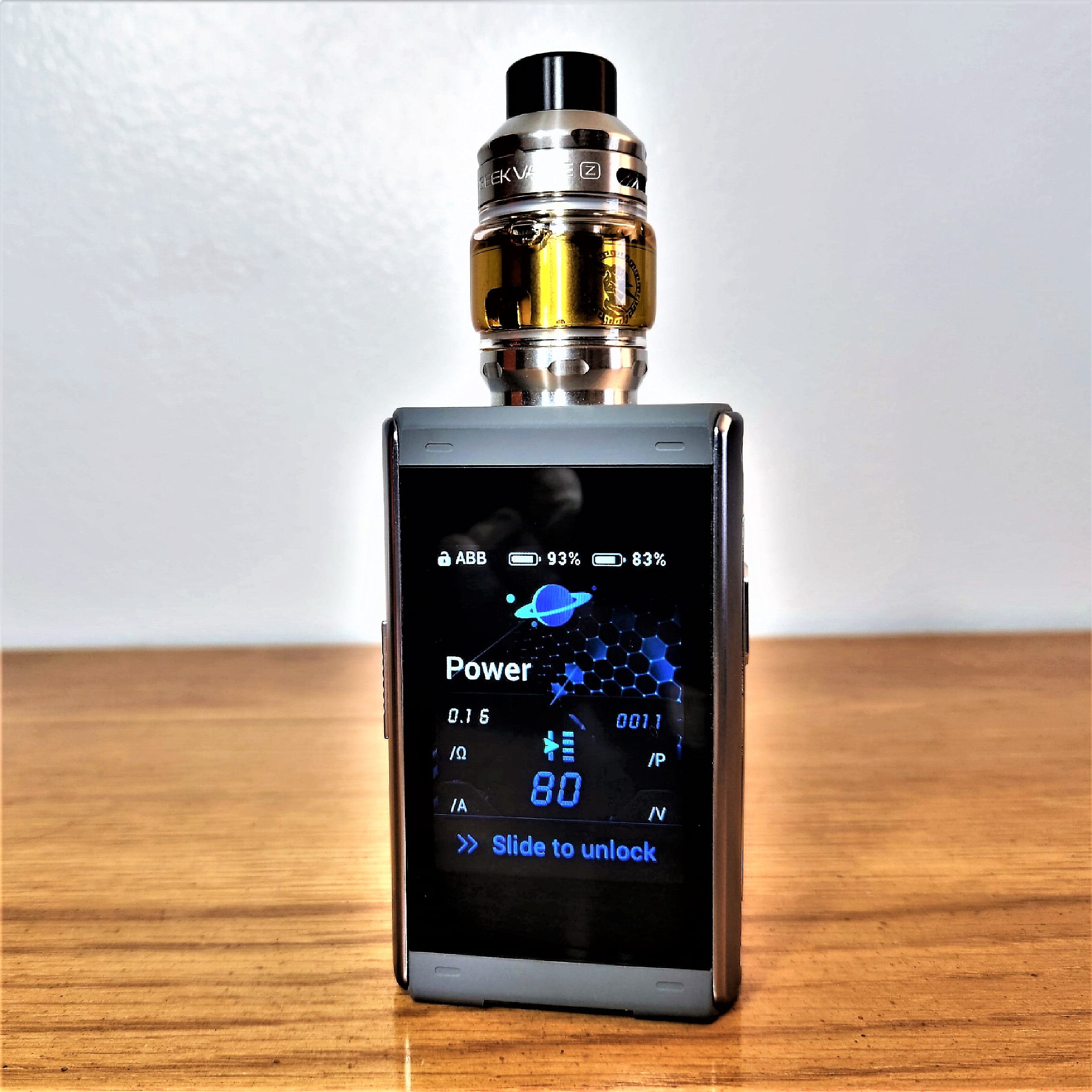 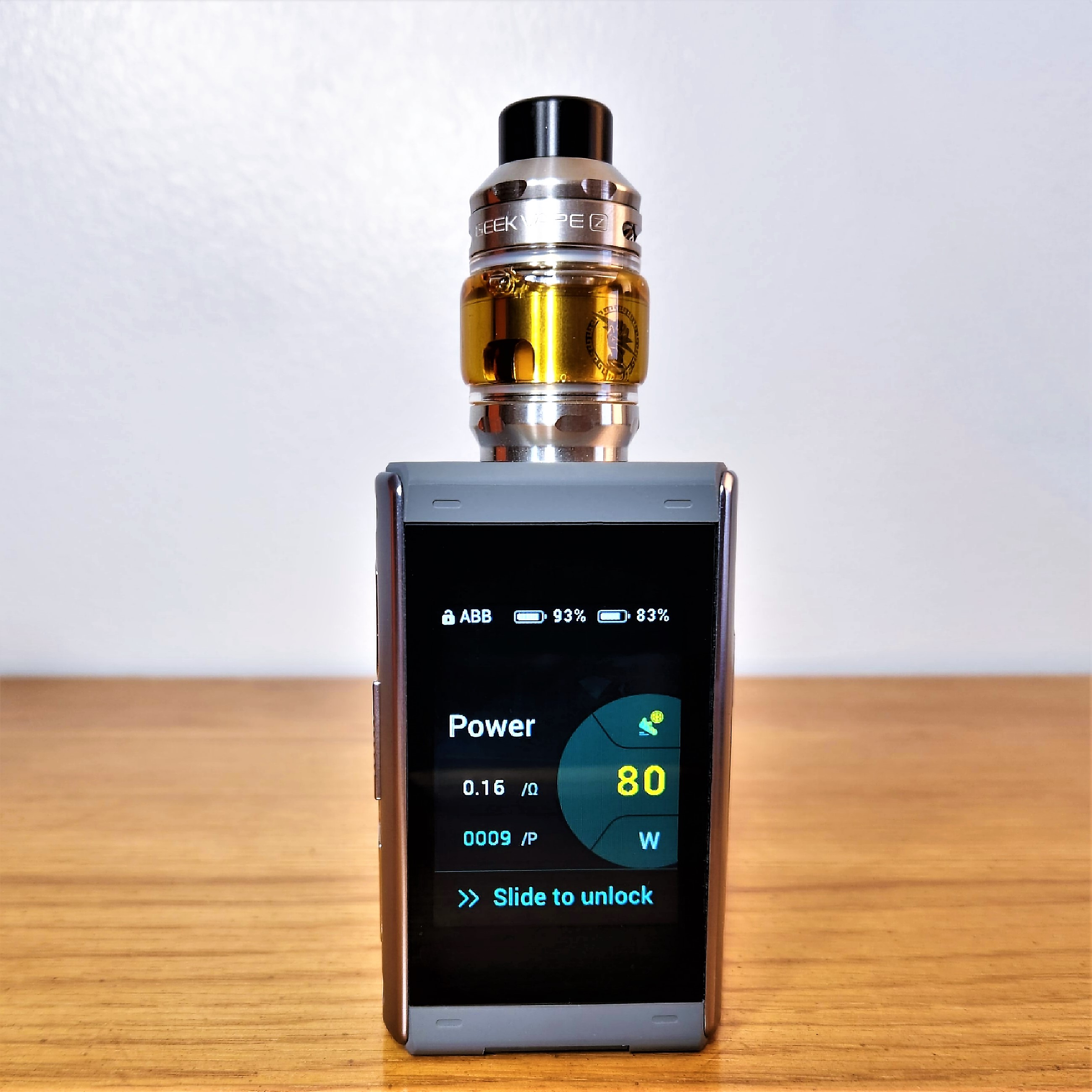 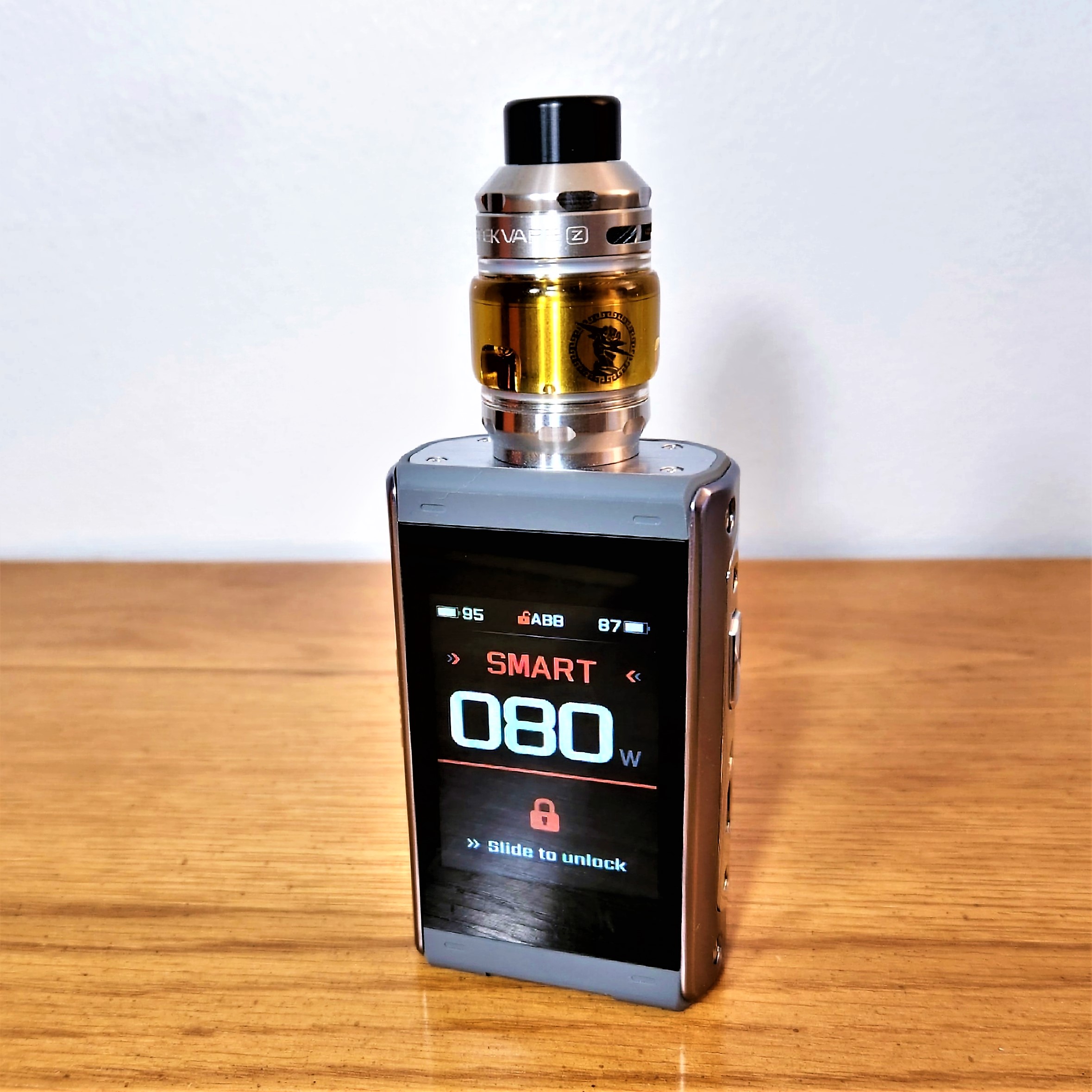 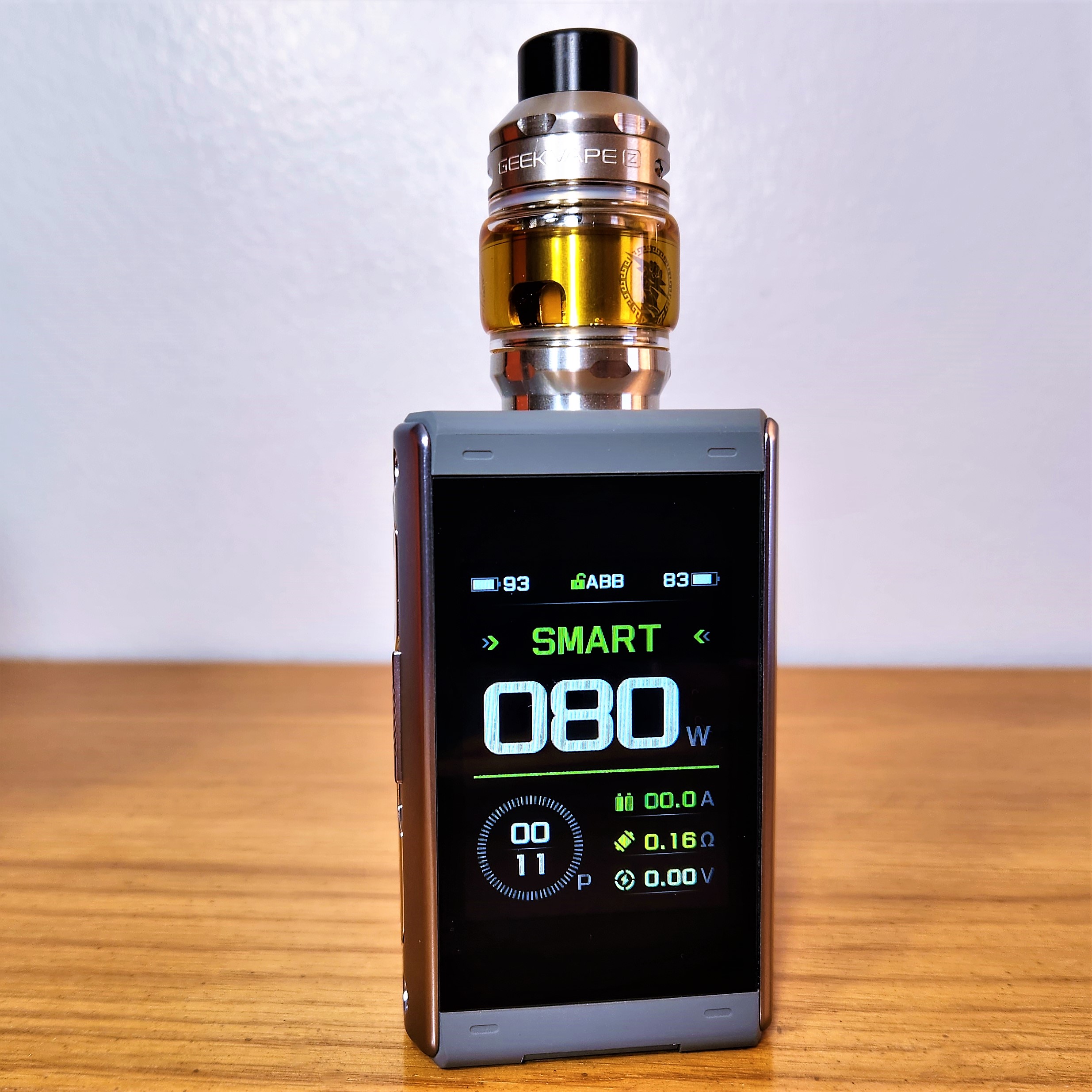 The display screen look a little different depending on your choice but the layout is pretty straight forward with the individual battery strength being shown in both a bar as well as percentage, watts or temp or volts are displayed in the center of the screen with amps, ohms and watts/ volts on the right bottom portion. Your puff counter is at the bottom left inside a dotted circle that becomes animated when vaped. You can see in the picture above that the batteries do not discharge evenly which remain at a difference of 10% all the way until fully discharged.

* Many Themes And Wallpaper


* Fire Button Could Be Placed Higher

* Scrolling Can Take Some Time To Do


Over all I'm very impressed with this mod with almost perfect touch responsiveness in any direction. The display screen is so massive almost being the whole front of the device and being as large as it is it's a fingerprint magnet but fingerprints really can't be seen once the screen is illuminated.

Because it's backside is rounded with a curve it does feel different holding but you will get used to it quickly as I have. If the fire button was placed a bit higher there wouldn't be any mention of it's shape from me.

I wish I could give you feedback on how well the temperature and TCR settings are but I only vape in wattage. The smart mode works very good giving you a recommended setting without going over the maximum wattage foe the coil used in the tank so a accidental increase over the max can't happen. This also has the round robin feature on the chipset which is a nice bonus.

I'll tell you that I didn't expect it to perform as well as it does but it really exceeded my impressions of what it would be.

As far as the Z-Sub Ohm ( 2021 ) tank goes it's never let me down with any issues in the past and it still holds true. Flavor on the preinstalled 0.15Ω coil is above average as well as the 2nd coil provided ( 0.4Ω ) which for me is great for conserving battery strength while still getting a flavorful vape with just not as much kick that the 0.15Ω coil gives.

I mentioned at the start of this review that I would leave a discount coupon code for purchase from Sourcemore and here it is GT200K.

I would like to thank Joyi and Sourcemore for providing the Geekvape T-200 Kit for the purpose of my review and I hope I answered all your question about this kit.

Great review Bob! You won’t be seeing any Geekvape reviews from me.
Reactions: Frenkyou
•••

hittman said:
Great review Bob! You won’t be seeing any Geekvape reviews from me.
Click to expand...

Me neither as they seem to have left us reviewers and members here at ECF for some reason but was curious to test out the touch screen T-200 and really like it.
Reactions: Frenkyou and hittman
•••

Nice review Bob.
Next time they'll add a cellphone to it and it will be a perfect cellphonevape with a nice screen and a vape option

bigbob2322 said:
Me neither as they seem to have left us reviewers and members here at ECF for some reason but was curious to test out the touch screen T-200 and really like it.
Click to expand...

I have to admit that this one looks nice but I’m trying hard to stick to my guns on this issue. I don’t blame you for wanting to test it.
Reactions: Frenkyou and bigbob2322
•••

dreamvaper said:
Nice review Bob.
Next time they'll add a cellphone to it and it will be a perfect cellphonevape with a nice screen and a vape option

Thank you dreamvaper, a manufacturer has done that with a bluetooth speaker, a cellphonevape should be right around the corner.

Thank you Frenkyou.
Reactions: Frenkyou
•••
Show hidden low quality content
You must log in or register to reply here.