Hello again dedicated readers. I’m back with another review for Hellvape. This time I’ll be taking a look at the Hellvape Dead Rabbit 3 RDA. I have to admit that I’m not a regular user of rdas but will do my best to cover this one as well as I can. I have tried a handful of rdas over the years and have even come across a couple I’ve liked but have always reverted back to rtas for the long haul. From what I can tell, the DR3 is a pretty good one that has two types of airflow, seals well, holds quite a bit of liquid, and has a little different type of liquid inlet when the squonk pin is installed. I did recently pick up a Topside 90 squonk mod that I chose to test the DR3 on for this review since I think most will be interested in using it on a squonk device but I could be wrong. 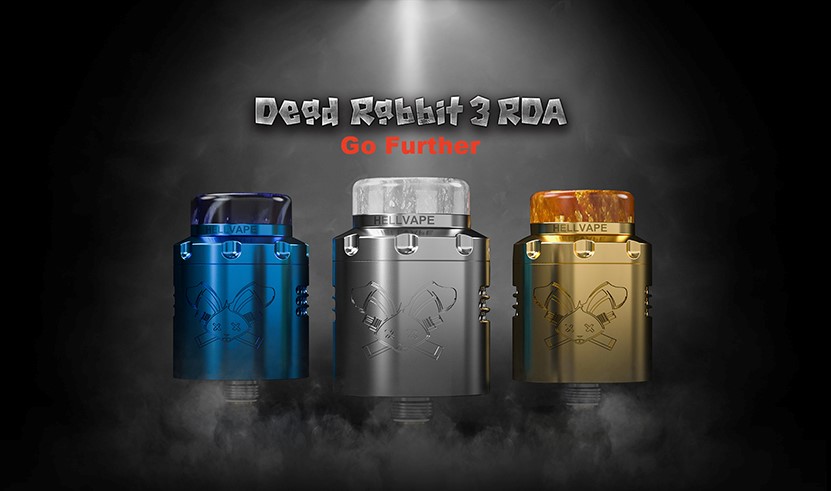 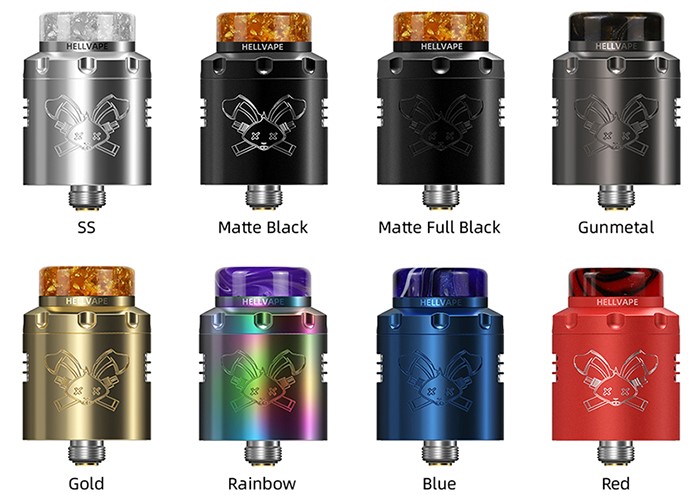 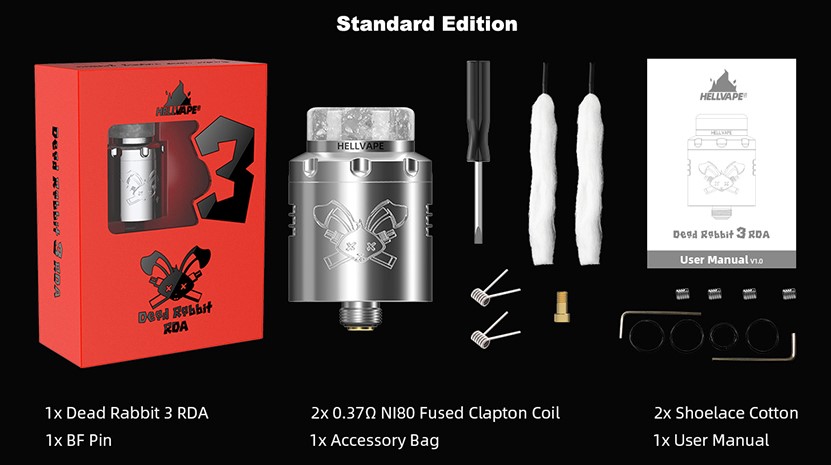 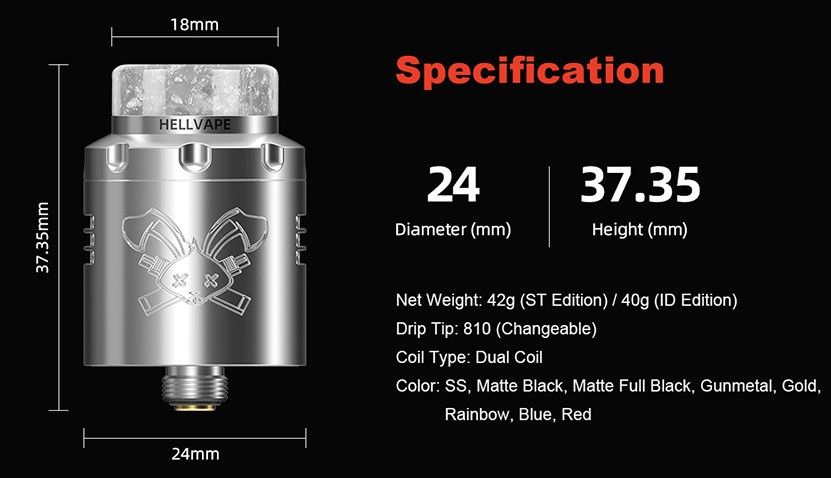 2. Smoother airflow by the round posts without turbulence

4. 5mm deep and ample juice well with no leaking

5. Side feeding design for quick e-juice transferring to cotton by BF pin 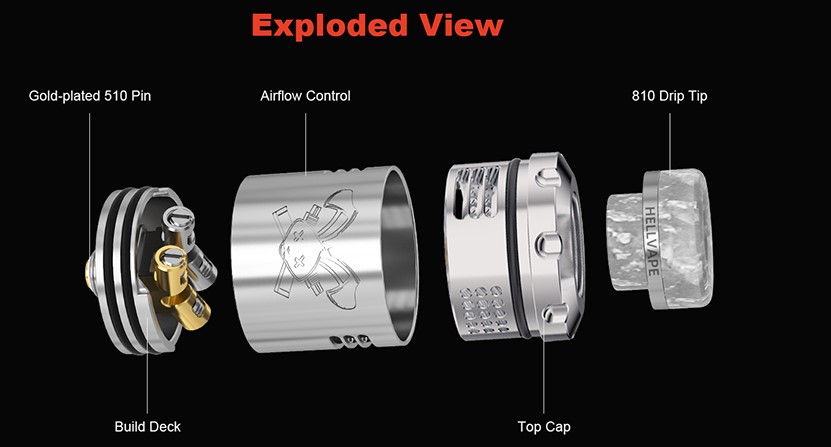 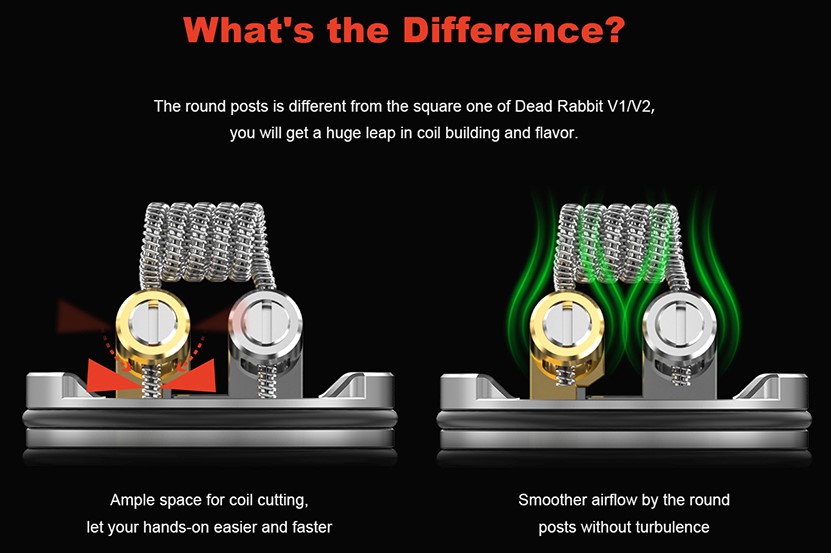 I’ve only reviewed a few items for Hellvape but have already become accustomed to the bright red color of the boxes that their devices arrive in. The DR3 is no exception. It comes in a red two part box with a viewing window on the front so you can see the color of the tank inside.

The back of the box has the features, specifications, and contents listed on the back of the box. I actually received two of the DR3 rdas for this review. One is rainbow and the other is matte black. I am not normally a fan of rainbow tanks but this one seems a little different from others I’ve received in the past and I actually kind of like it and think it looks pretty decent on the gray Topside 90. Besides the contents listed on the box, there is also a card inside that explains how you can have a chance to win a collector’s edition DR3 by posting pictures on social media of your rda. 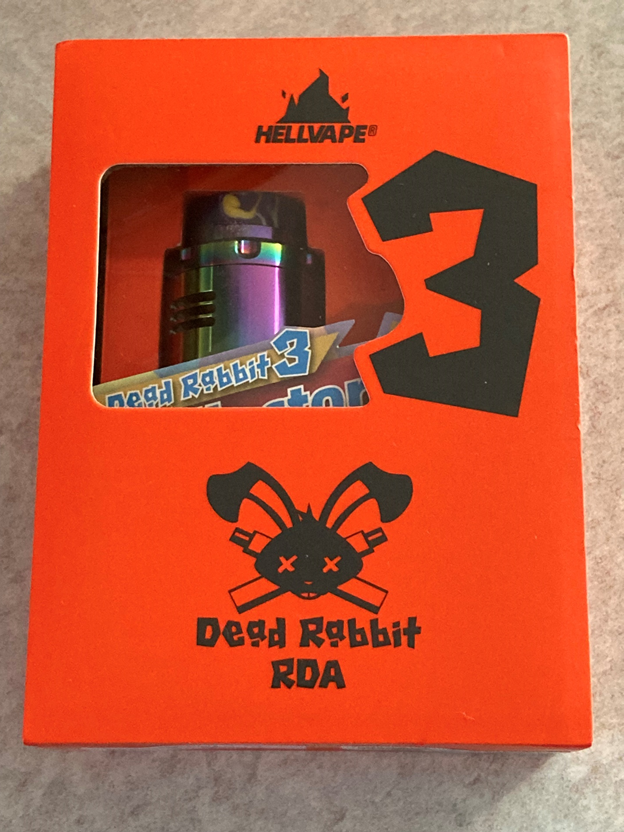 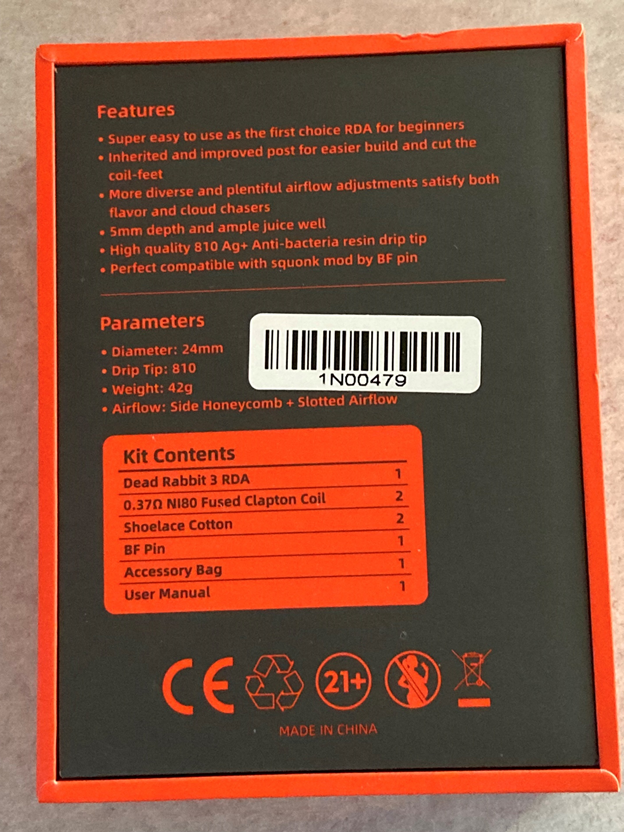 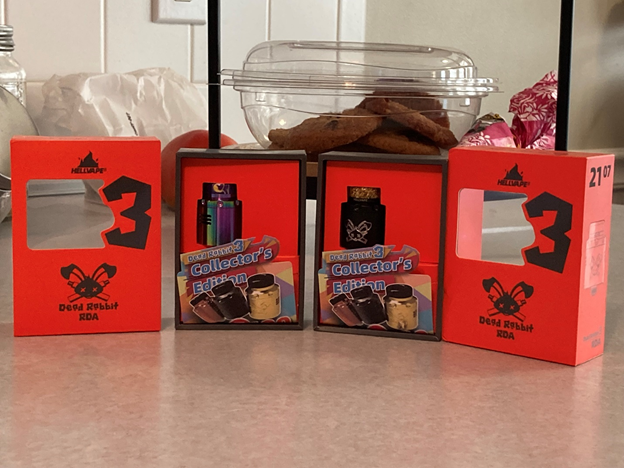 I really like how the Dead Rabbit 3 RDA comes with different colored drip tips with each color of tank. The drip tips are 810 and don’t have any o rings on them as the o ring is built inside the top cap. Also it has the metal beauty ring on the bottom of the drip tip with the Hellvape name etched in that ring. That etching and the Dead Rabbit picture on the front are the only branding on the rda. 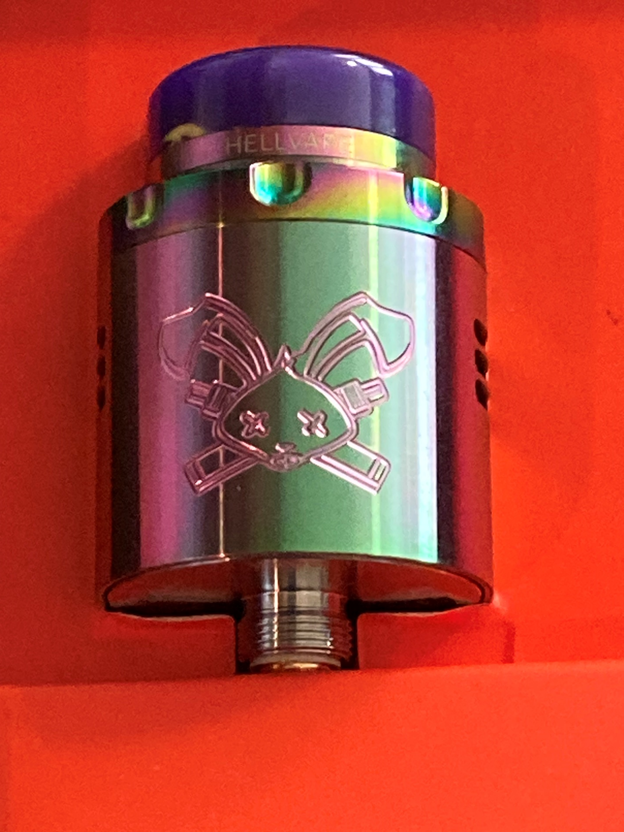 The DR3 is easily broken down for cleaning. There is an o ring on the top cap that you rotate to adjust the airflow. It is tight enough to offer just enough resistance so it doesn’t get turned on accident. There are double o rings on the base to prevent leaking but are not so tight that it is extra difficult to remove the deck from the outer chamber. I was able to pick up my Topside 90 by the rda several times and the chamber never came loose from the base. 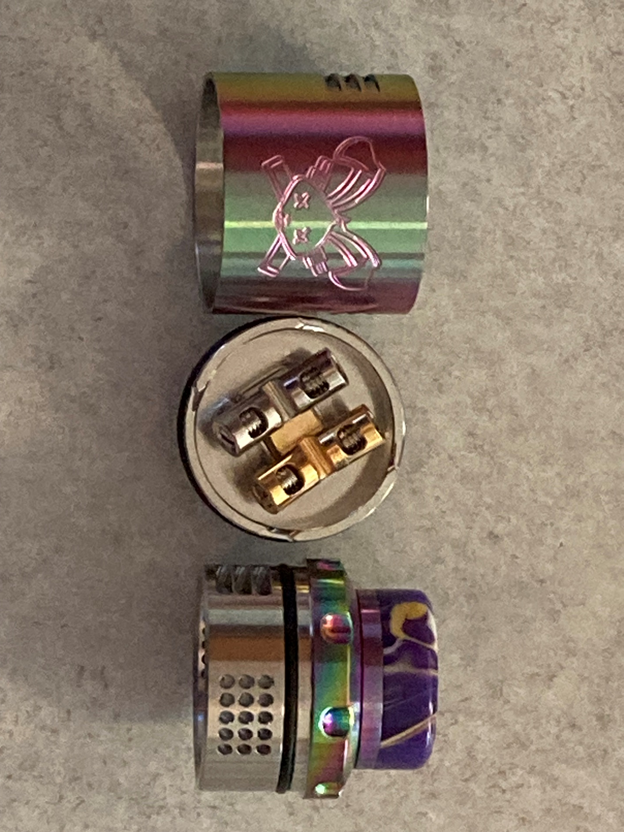 I like that there are notches on the cap to make it easier to turn to adjust the airflow. The top cap has two types of airflow available that aligns with the slots in outer chamber. There are three rows of five honeycomb style holes on both sides as well as three rows of slotted holes on each side. I tried both types of airflow and both performed well and gave very good flavor but felt like the airflow was a little smoother using the honeycomb airflow. I used the two included coils and cotton in the rainbow rda and installed the squonk pin so I could use it on the Topside 90. I preferred it set at 55 watts with three rows of honeycomb holes open. The airflow was very smooth and did not whistle at all. The included coils read .17 ohms installed in the rda. For the black one I decided to use some other coils that I had from some Geekvape packs I had bought a long time ago. Two of those coils installed were reading .41 ohms in the black tank and I was able to run comfortably at 45 watts with the same three rows of holes open. 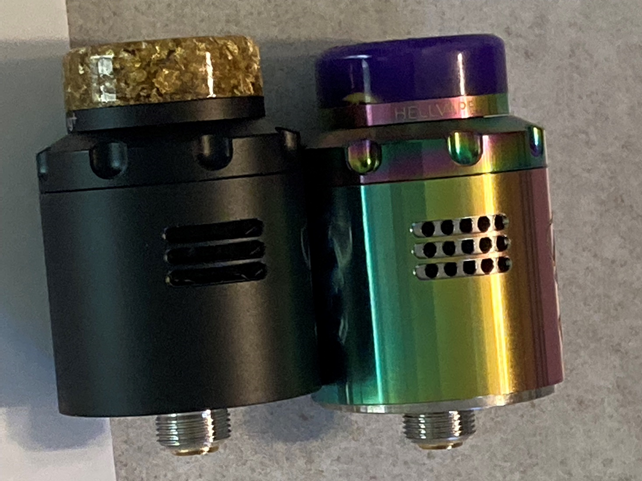 I really like how easy the deck is to build on this rda. There are slots in the coil base that align with notches in the outer chamber to help align the airflow with the coils. Also the posts are rounded instead of square which I believe helps with the airflow by the air passing more easily past the posts to provide less turbulence. The posts are raised at an angle to allow you to insert the coils, tighten them down, and then trim the legs afterward. This is a really nice feature in my opinion but it’s a bit of a tight fit getting the cutters in there. A little more room would be much appreciated. One thing you want to remember is that after you cut the coil legs make sure to turn the rda over and make sure you get out all four clippings. Otherwise the cut off pieces could short out the deck posts and that would be very bad.

Once the coils were inserted, I straightened them as much as possible and heated them up to work out any hot spots so that they fired evenly. The cotton wicks included are long enough to wick both coils with one thread. However, it’s much easier if you pull the thread all the way through on the first one and then trim it so that you still have the plastic on the end to thread through the second coil. I cut the wicks a little extra long so that they could reach the bottom of the deck and combed them out some.

One other thing that I like about the DR3 is that it has two liquid fill holes with one on each side that deposit directly to the place where you tuck the cotton tails. I’ve found that this does a really nice job of saturating the wicks on both sides and seems like the liquid uptake to the coil is a little faster when using the included squonk pin. The base is fairly deep and will hold quite a bit of liquid. I found that I didn’t need to squonk near as often as I thought I would running at 55 watts. I’m sure the included coils will easily operate at much higher wattage but I personally don’t like a very warm vapor. 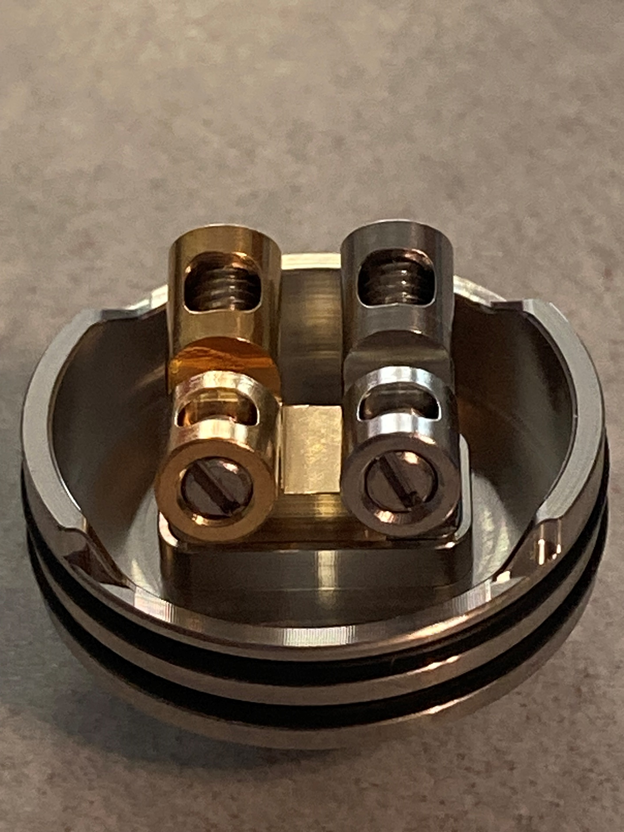 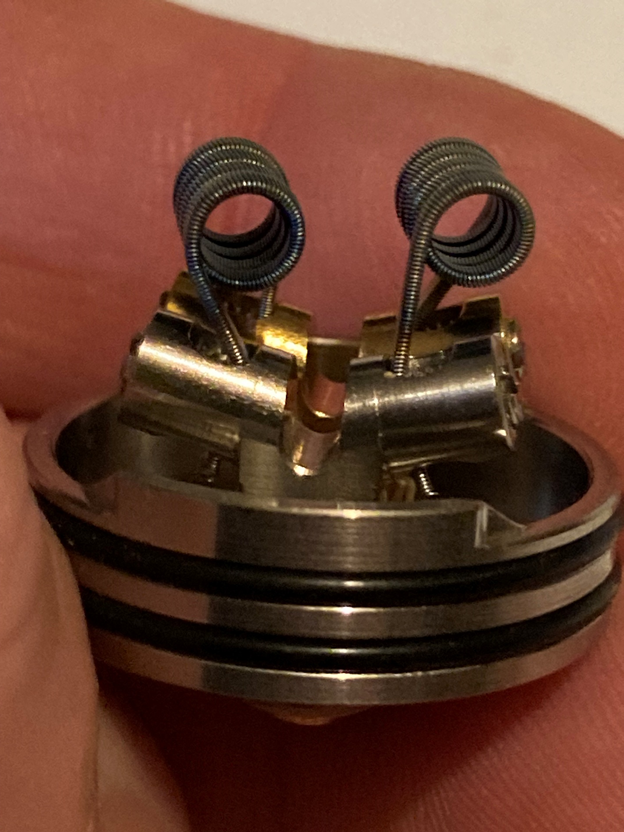 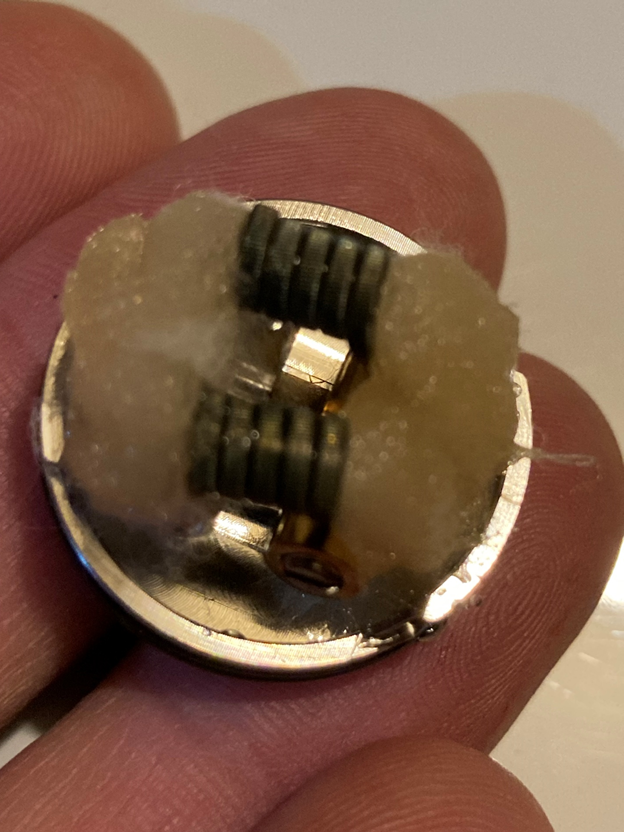 On the bottom of the base it has a serial number and the Dead Rabbit 3 RDA printed as well as a gold plated 510 center pin. This is where the included allen wrench is used to remove the center pin if you choose to install the squonk pin. 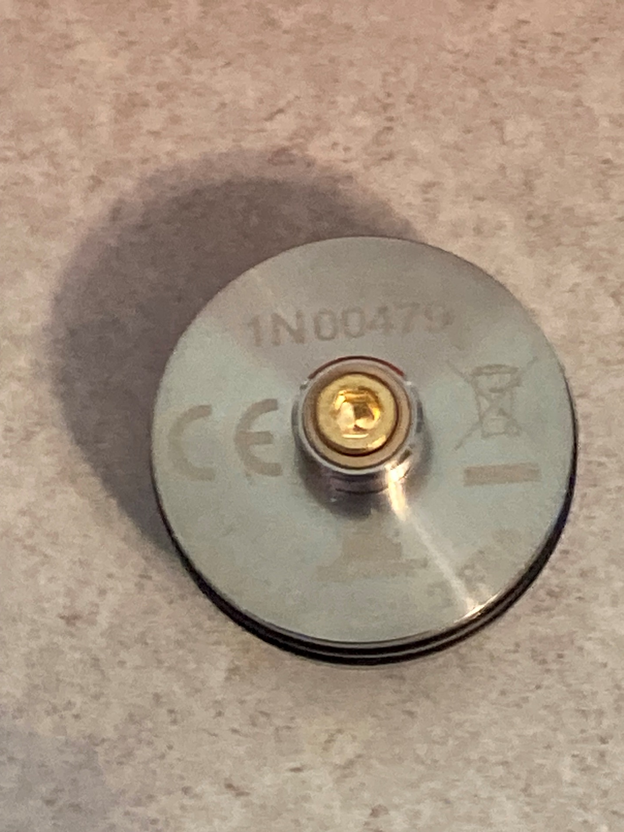 As I mentioned in the beginning, I’m don’t commonly use rdas but every once in a while I will get one for review that I really like. This is one of those.

I like how when using the squonk pin that the liquid feed holes are on the sides to directly feed the wick tales. I have never tried either of the previous versions so don’t know if this is a new design or not.

The two choices of airflow having both honeycomb and slotted is a great design in my opinion to appeal to different users and vaping styles. I have previously and also in the case of the DR3 prefer the honeycomb airflow as it seems a bit smoother. This is also helped out some by the rounded design of the posts to decrease airflow turbulence.

The deck design is a great fit for me. I very much like being able to install the coils and then trim them afterwards. I’m sure this would appeal to newer users also.

Overall, I think that the Hellvape Dead Rabbit 3 RDA is a well designed and built rda. I have been enjoying testing it due to the very good flavor production and the ease of use. So, would I recommend this one to you? If you like dual coil high output and large flavorful vapor production then yes I absolutely would recommend it. I like it well enough that I, the non rda user, plan on keeping it in rotation for some time to come.

I’d like the thank Hellvape and Mindy for sending the Hellvape Dead Rabbit 3 RDA for this review. It has been a pleasure to test as have previous tanks that they have sent for review. Also a big thank you to the readers that make this possible. Below is a link to the Hellvape website for your viewing pleasure. 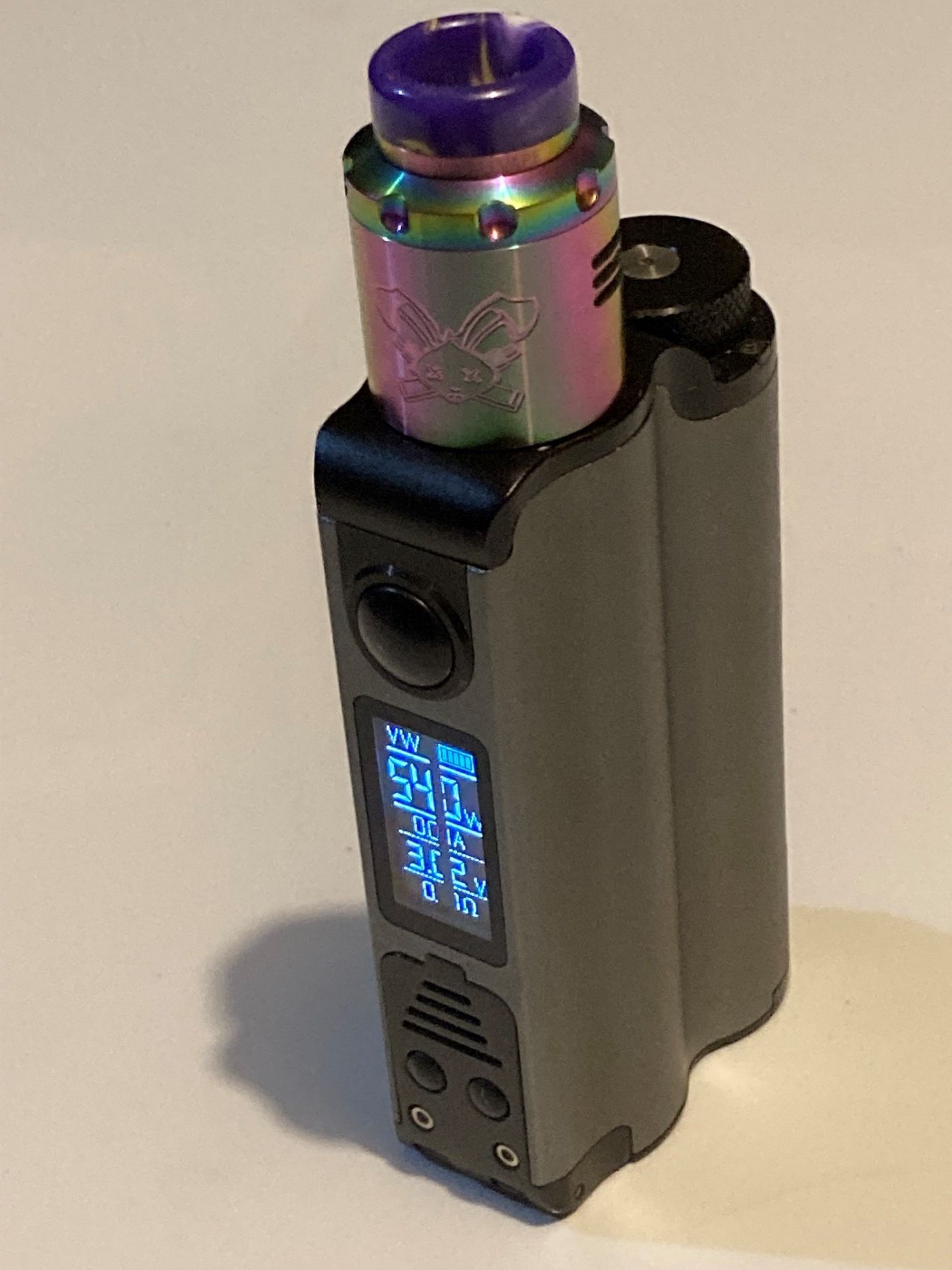 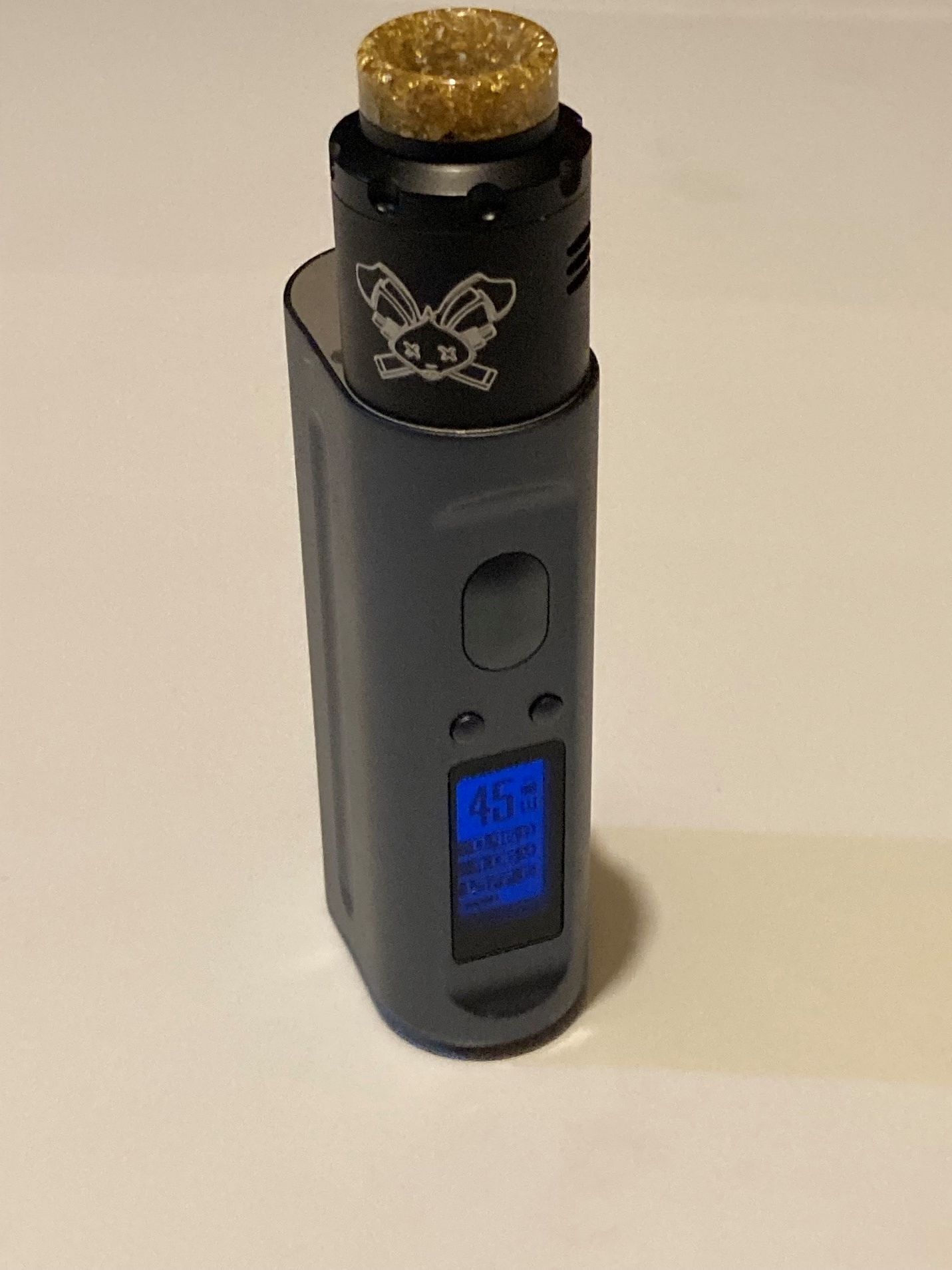 As usual it's always a pleasure to read one of your reviews.

Personally i haven't tried a double coil atty before so i might choose one for my next review,i like reviewing stuff i haven't used before.

Is the aperture of the drip tip wide enough to drip thru it without removing the top?
You mentioned two liquid fill holes,are those the squonk ones or does it have a side refill like the Brunhilde?

Good review, due to age and dexterity I'll stick with drop in coils.
•••

Javichu said:
As usual it's always a pleasure to read one of your reviews.

Personally i haven't tried a double coil atty before so i might choose one for my next review,i like reviewing stuff i haven't used before.

Is the aperture of the drip tip wide enough to drip thru it without removing the top?
You mentioned two liquid fill holes,are those the squonk ones or does it have a side refill like the Brunhilde?

Thanks. If you look at the gif in the review you’ll see the liquid coming in on both sides of the deck. Yes, it’s only when using the squonk pin. The drip tip is plenty wide enough to drip through if not squonking.
Reactions: Javichu
•••

dennism said:
Good review, due to age and dexterity I'll stick with drop in coils.
Click to expand...

Thanks. The nice thing about this one is it’s so easy to build on since you can trim the coils after installing them. Just drop them in, tighten, and trim.
•••

hittman said:
Thanks. If you look at the gif in the review you’ll see the liquid coming in on both sides of the deck. Yes, it’s only when using the squonk pin. The drip tip is plenty wide enough to drip through if not squonking.
Click to expand...

Good to hear.
One of the main reasons i haven't been keen on using RDA is having to remove the cap but this one sure seems like winner.

Javichu said:
Good to hear.
One of the main reasons i haven't been keen on using RDA is having to remove the cap but this one sure seems like winner.

I’m not a regular user of rdas either but I’ve gotten more familiar with them doing reviews and every once in a while I get one I really like. I’ll have to try it with a single coil just to see how it is.
Reactions: Javichu
•••

Thank Fran. I’m keeping one in rotation on my topside for a while.
Reactions: FranC
•••
Show hidden low quality content