Hello and welcome back for yet another review by yours truly. I know the names can get a little confusing but this time I was sent the Hellvape Dead Rabbit 3 RTA by Hellvape in order to provide you with a fair and honest review. I did not have the opportunity to try the previous versions of this rta so will not be able to compare them. I will however do my best to cover the features of this new rta and give my opinions on it. The DR3 RTA is a 25mm rta with a liquid capacity of 3.5ml with the pre-installed straight glass and 5.5ml with the included bubble glass. The airflow is top to bottom which I happen to like very much. It helps to eliminate the chance of leakage that can be had with some bottom airflow tanks. It sports a postless deck with honeycomb and slotted airflow. Like many tanks, it says it can be used in single or dual coil configuration but it seems that many dual coil tanks don’t perform well in single coil configuration. I plan on trying both for this review. For now let’s take a look at what is included and some promotional images and I’ll give my thoughts on this new RTA. 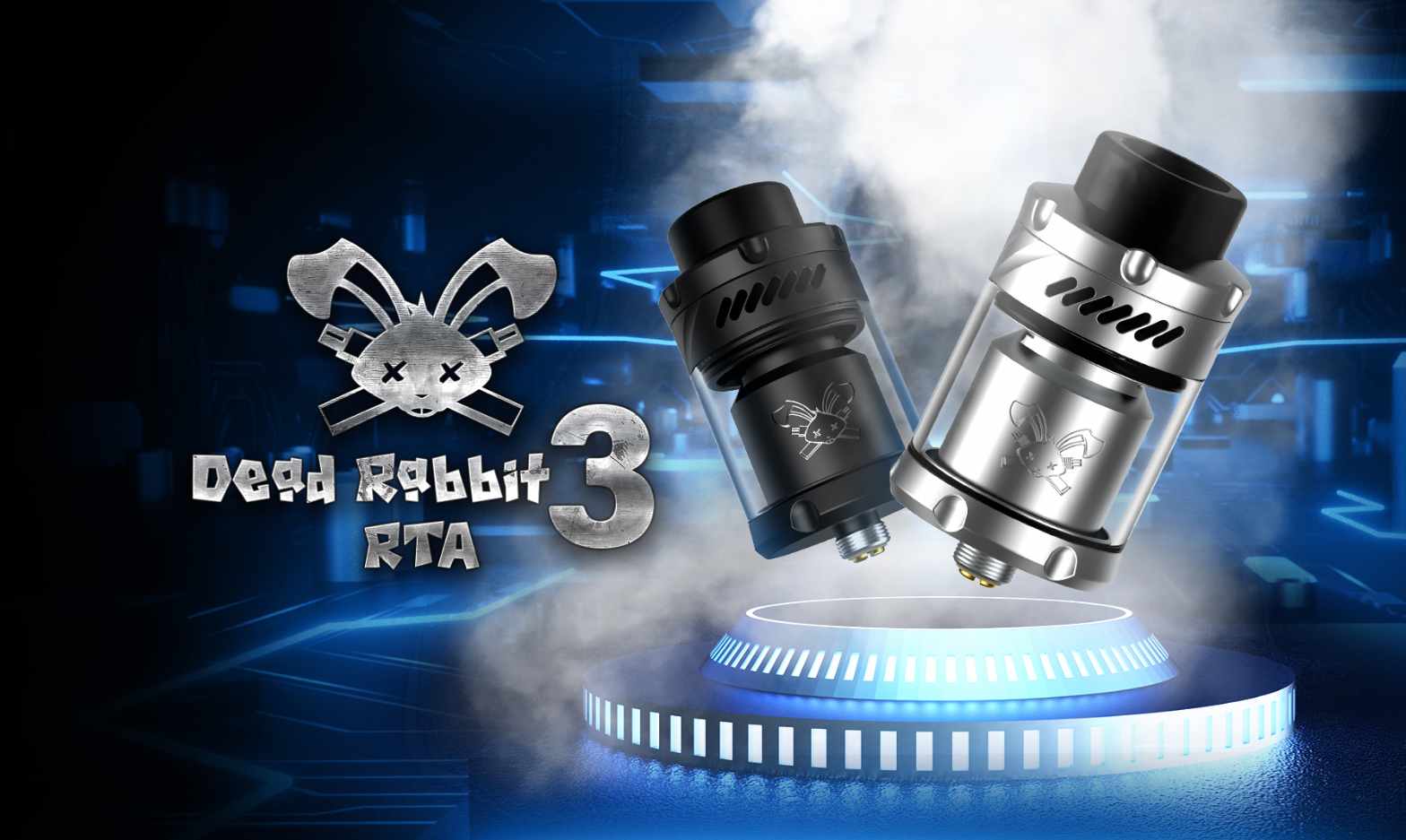 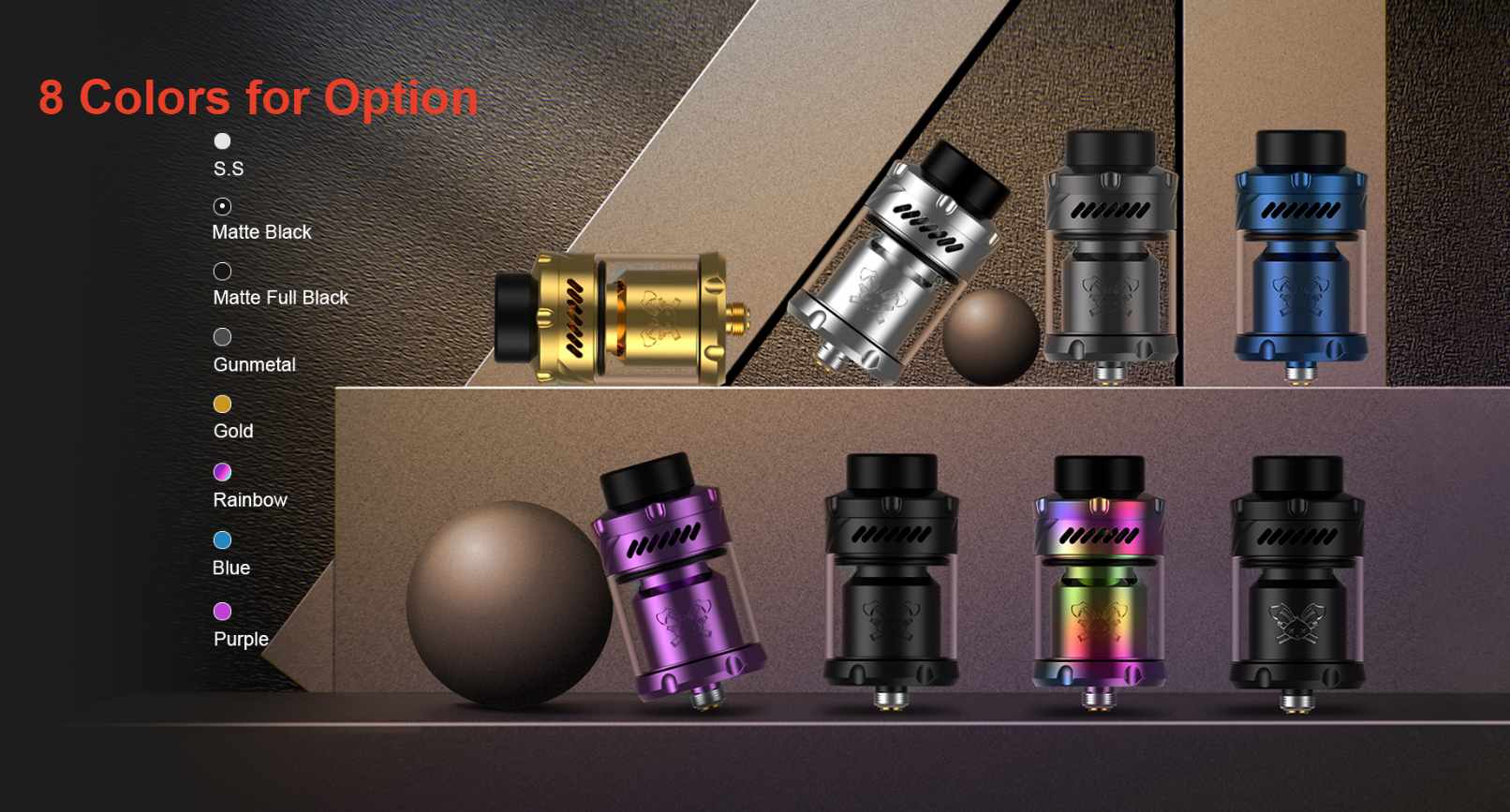 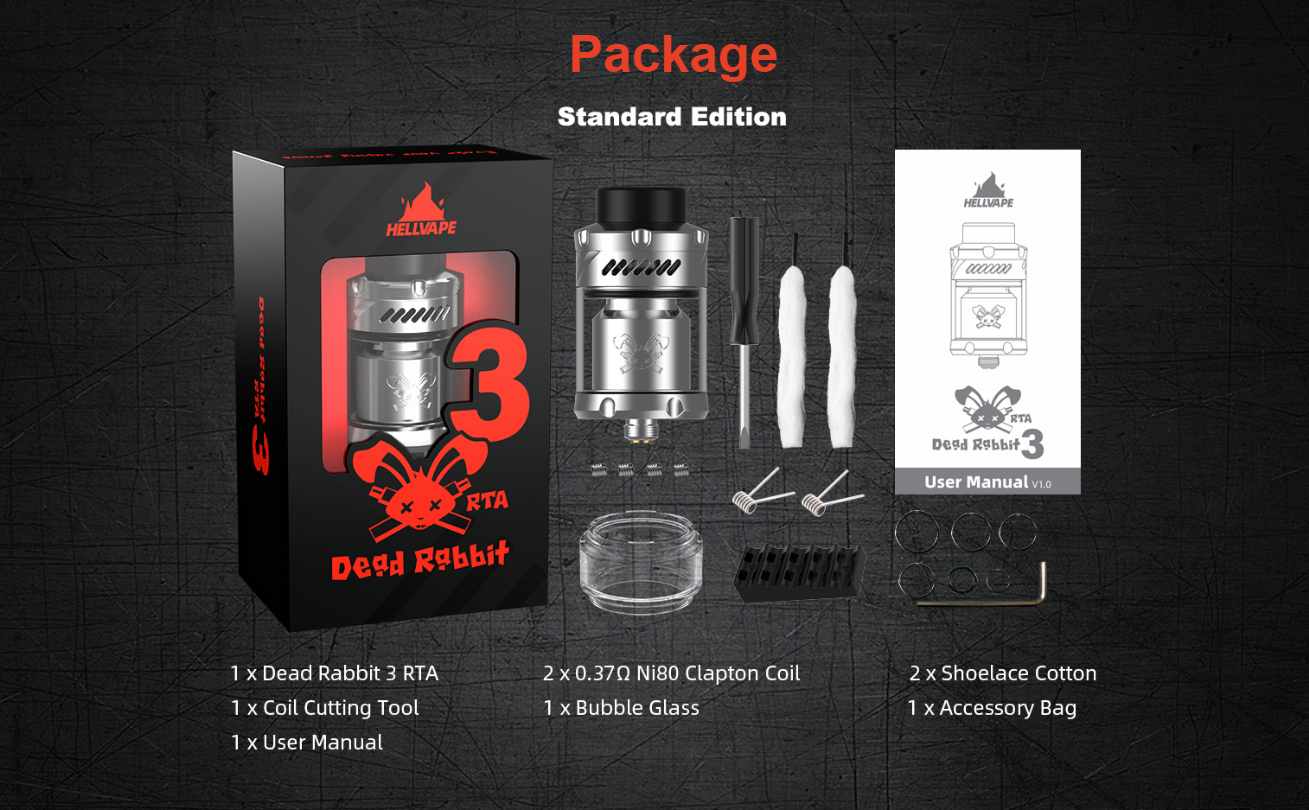 4. Quarter turn to open the top cap and refill 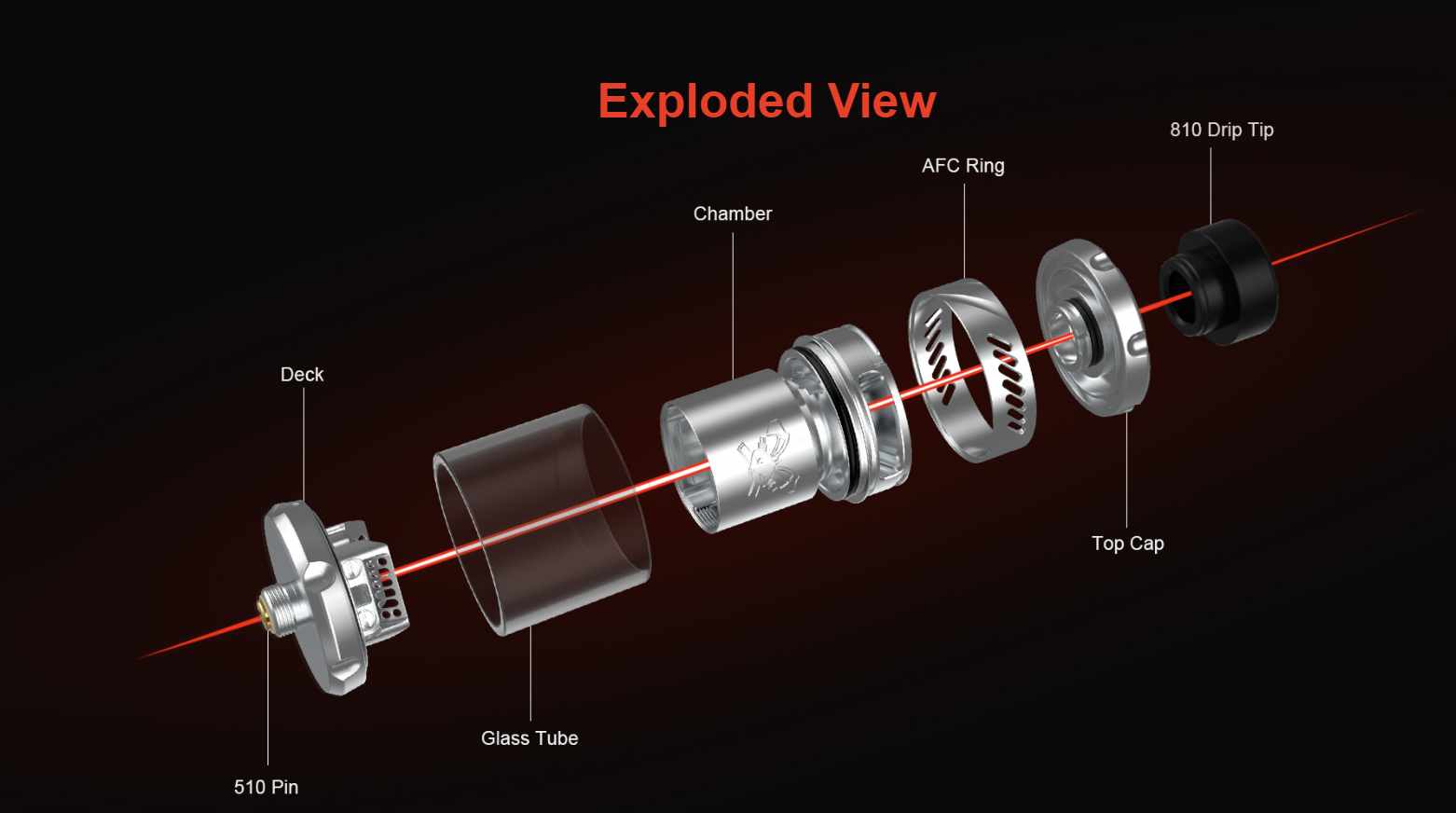 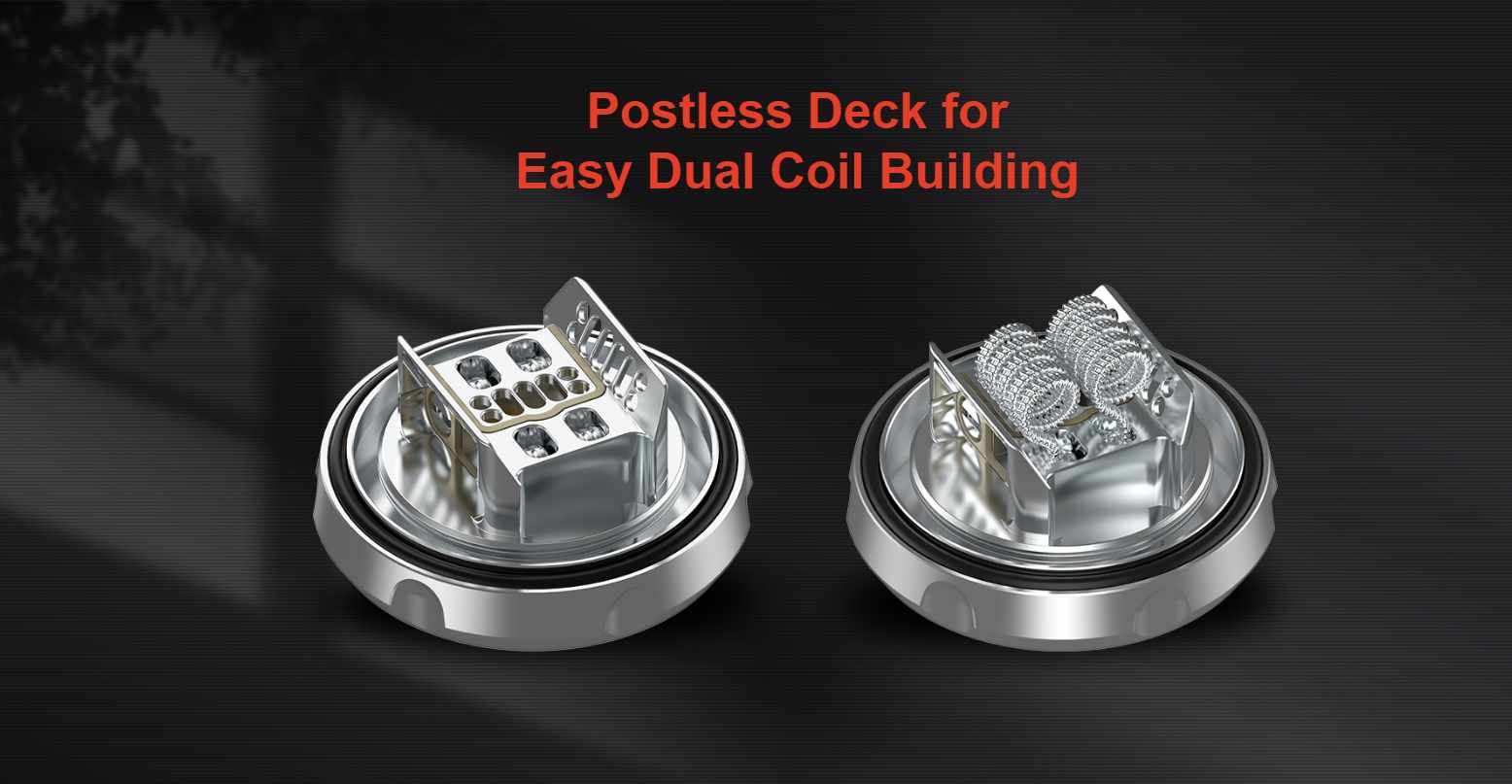 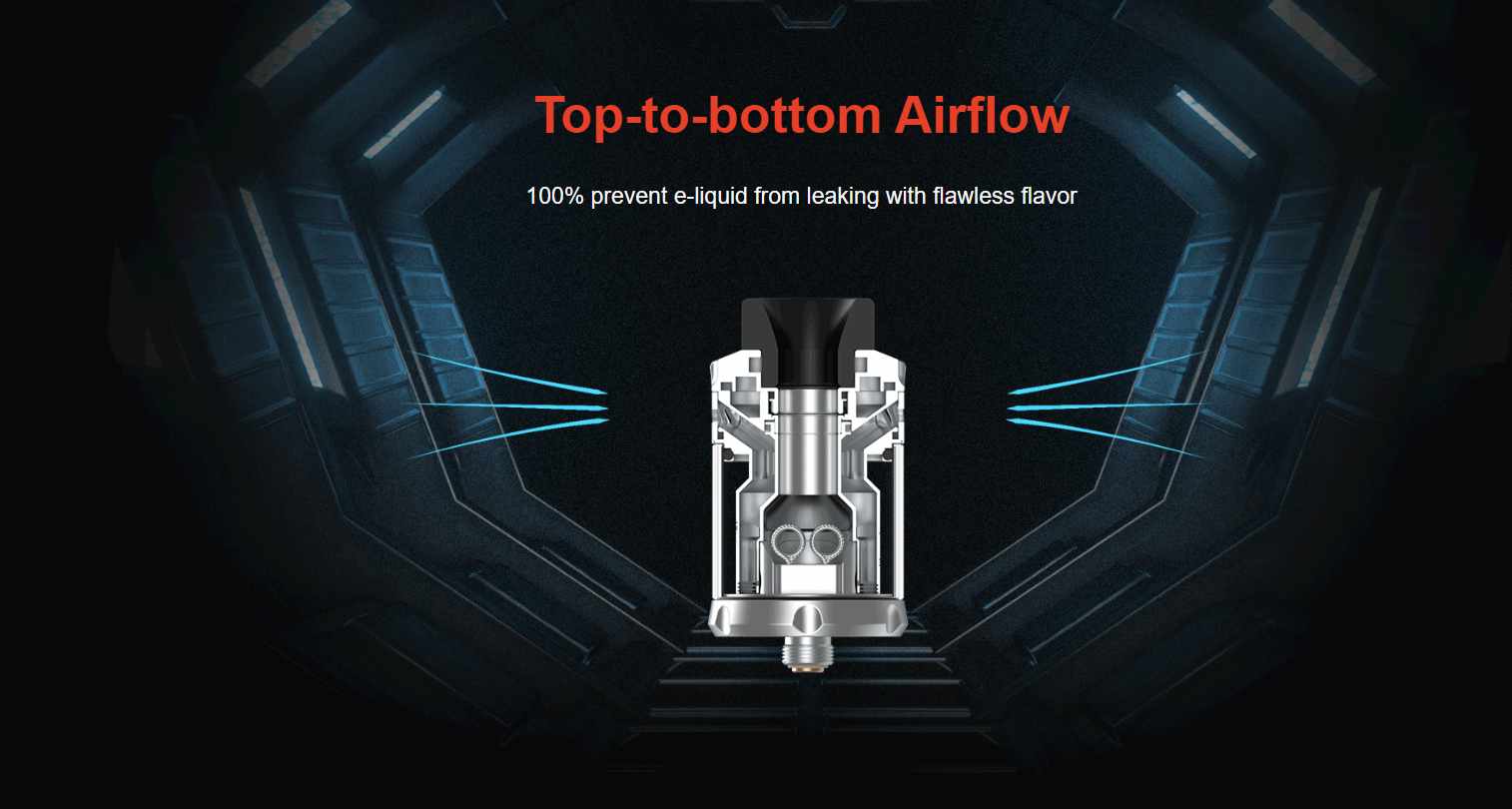 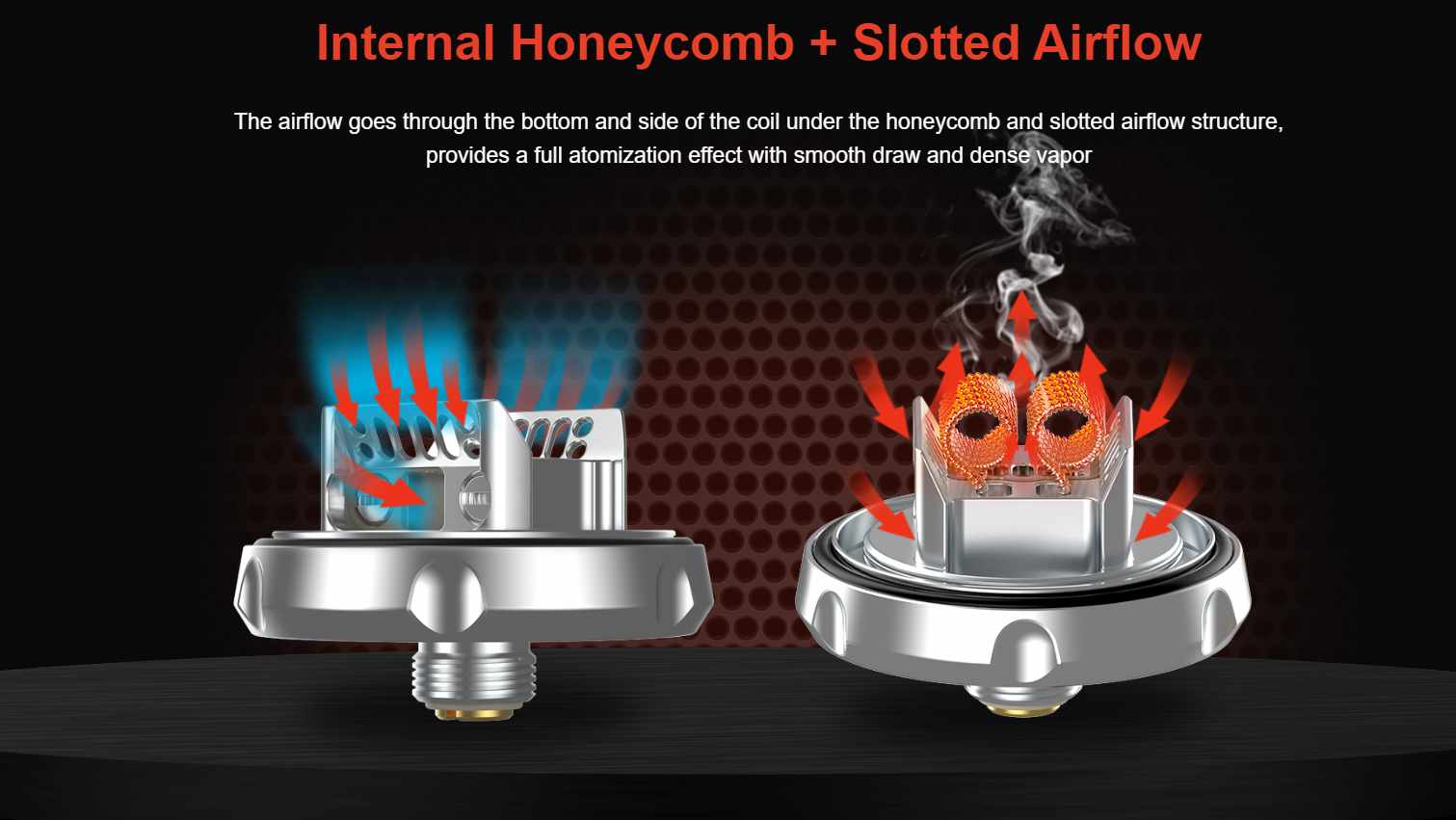 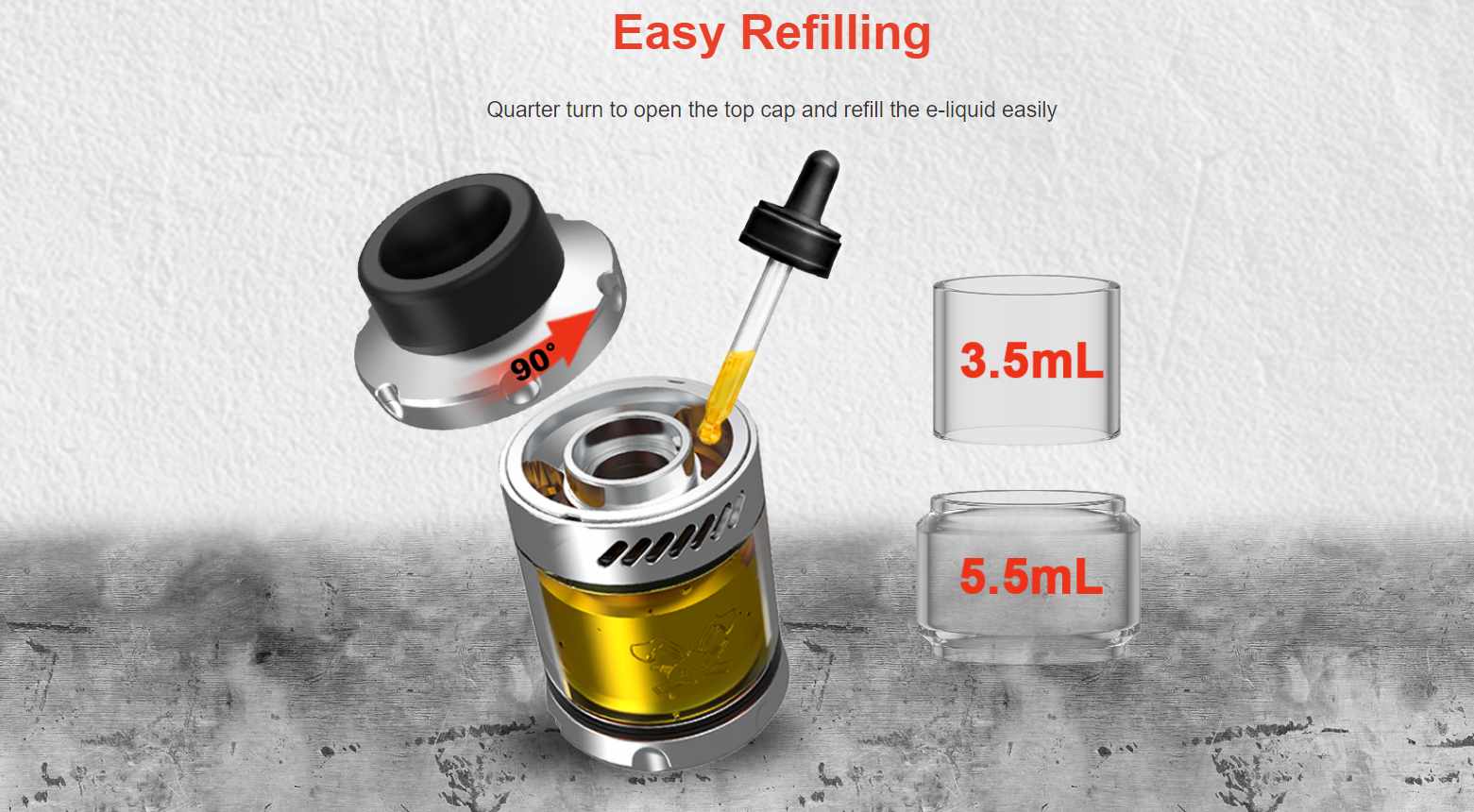 The packaging for the Dead Rabbit 3 RTA is the usual red and black that I’ve seen many times on Hellvape samples. I really like it. On the front is the Hellvape name and Dead Rabbit logo image. It’s nice how it has the clear window so you can see the tank inside. On the back of the box is a list of features, contents list, and company information. Once the top is removed then you can get a better look at the tank and also see the spare bubble glass that is included. The straight glass that is pre-installed has a 3.5ml capacity while the bubble glass allows 5.5ml of liquid capacity. I ran the straight glass for a few days but running dual coils on this one it goes through the liquid fairly quick so switched to the 5.5ml bubble glass after that and was happy with not having to fill as often.

Underneath the foam insert holding the tank is where you will find the accessories and user manual for the tank. Included are two .37 ohm Ni80 Clapton coils, two cotton threads, extra grub screws, coil cutting tool, and spare o rings. I like how the coil cutting tool has an arrow on the side pointing to the correct measurement that is suggested for coil leg length. It’s a good thing that there are extra o rings included also. After washing the tank and letting it dry, I didn’t notice that the o ring on the deck had moved and when I screwed the tank together it pinched the o ring and cut it. No problem though. Just grabbed a spare and proceeded to build the tank. 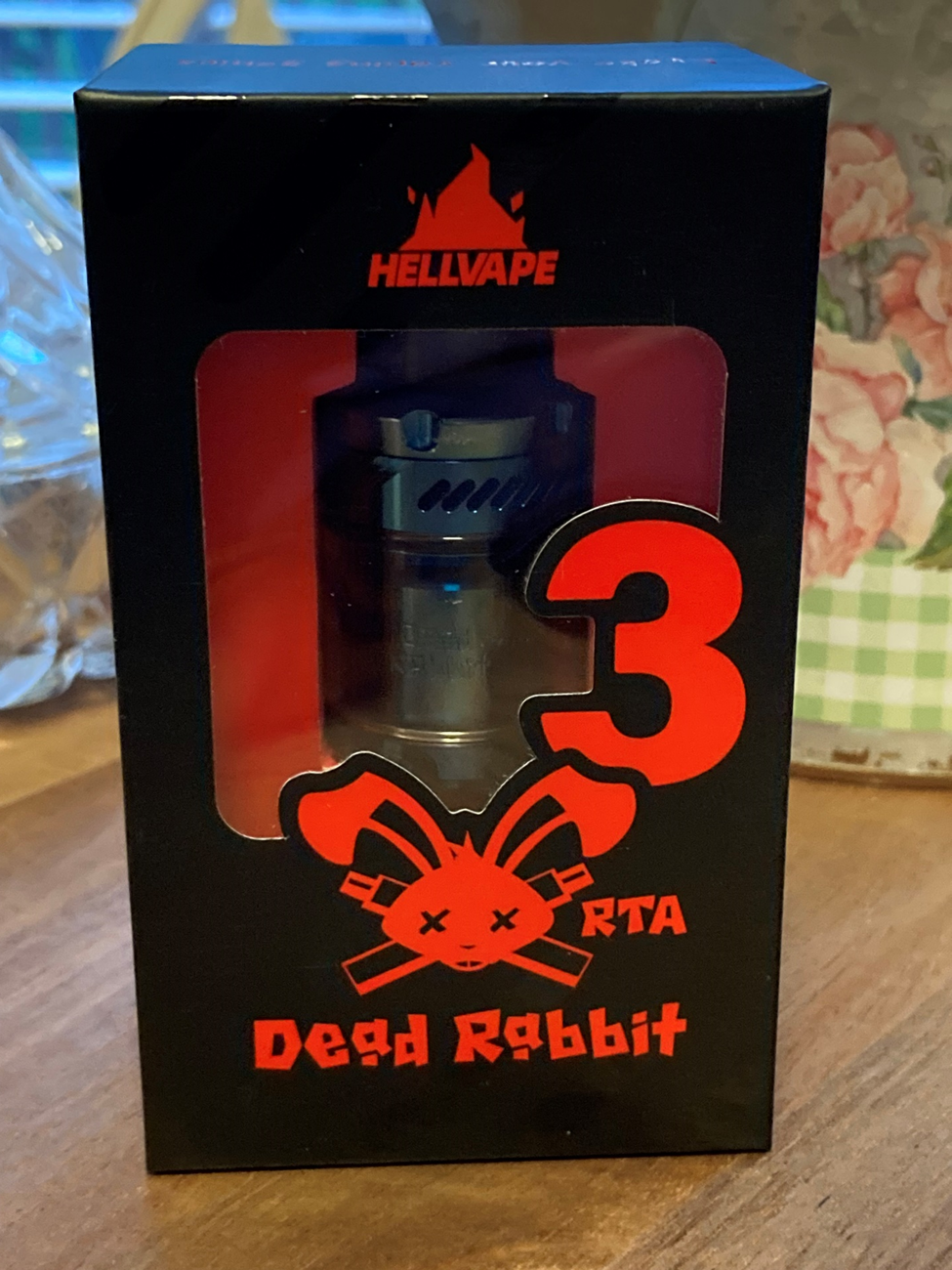 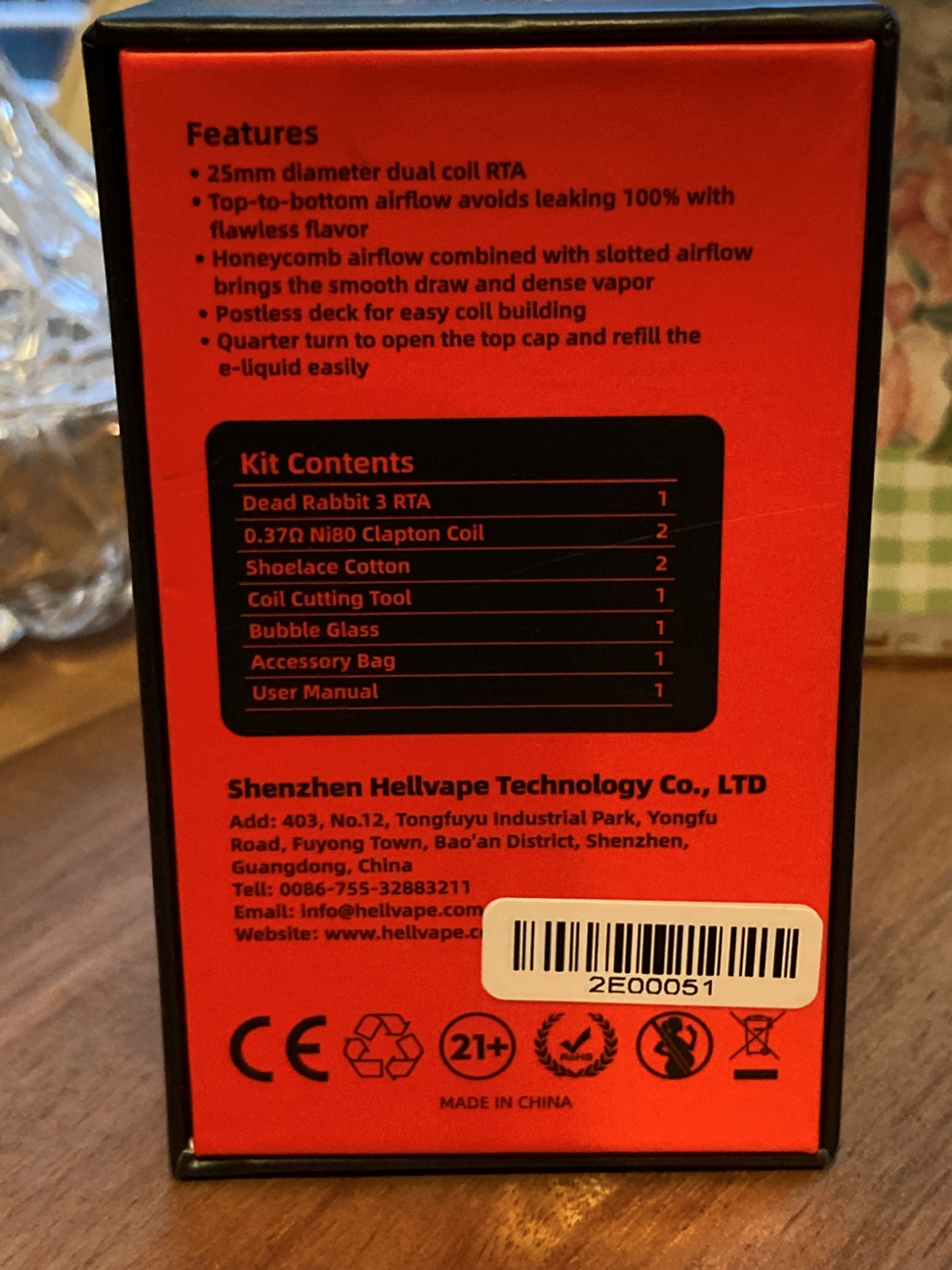 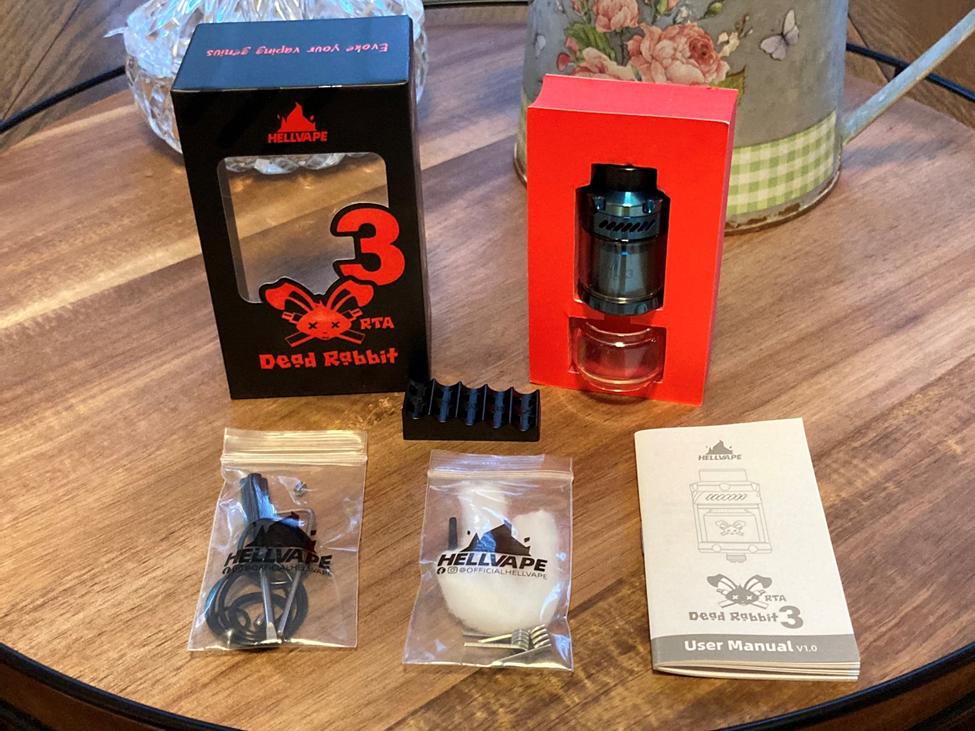 The DR3 RTA can be easily disassembled for cleaning. It’s definitely always a good idea to clean your tanks before using them. If you’ve ever had the taste of machine oil in your vape then you’ll understand what I’m talking about. Back in the day I didn’t clean one and definitely regretted it after having to dump the tank and replace the coil and wick from a fresh build. 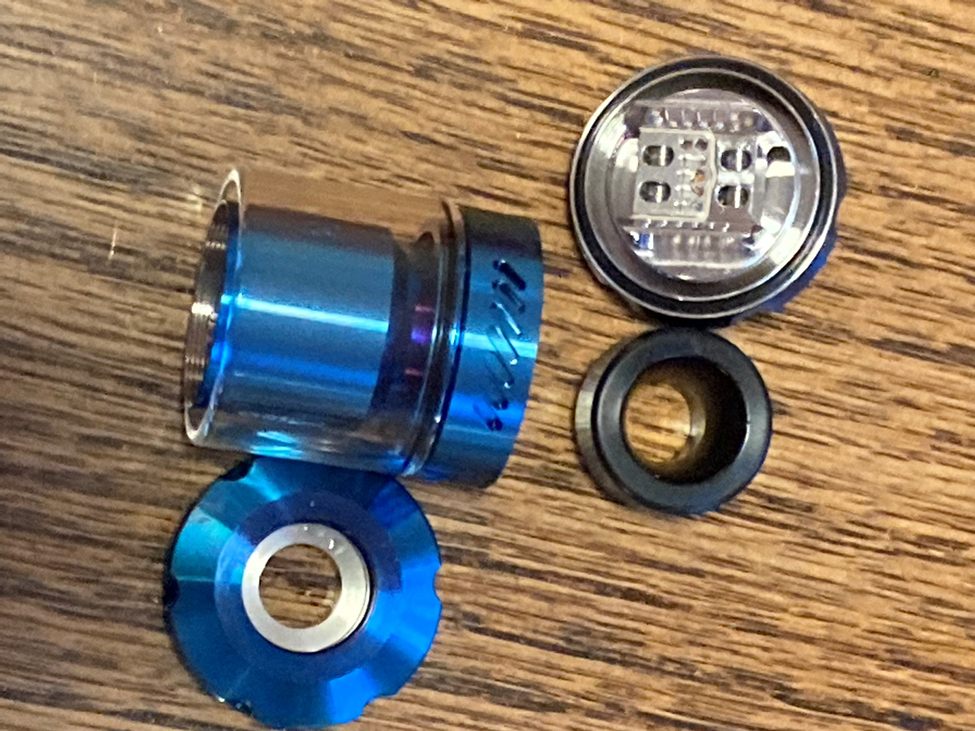 The DR3 RTA comes with an 810 drip tip and the o ring is in the top cap instead of on the drip tip. Some people seem to prefer this but I’m not really sure why. It really doesn’t make a difference to me. The included drip tip is alright but I did end up replacing it with one of my own after a couple days of use and am not totally happy with the one I picked so it’s time to go back through the drip tip drawer and find a different one. I’m using a longer straight tip but usually prefer a tapered tip on most of my regular use tanks. I’ll have to try one on this one.

On the underneath side of the top cap is an o ring and you can see in the second picture below that there are two notches that help lock the top cap in place. Like many tanks these days it is a bayonet style top cap that is installed or removed with a ¼ turn of the cap. 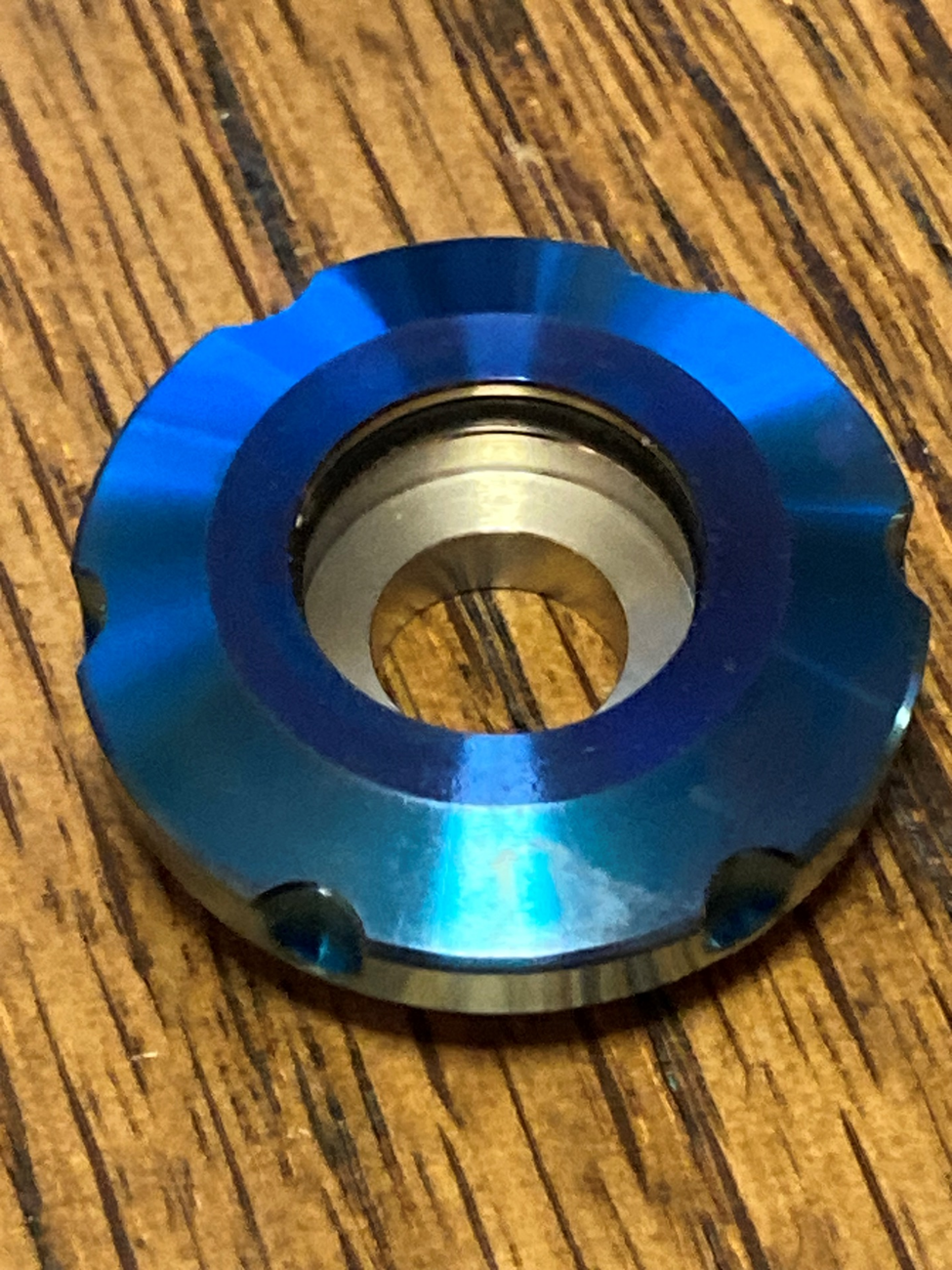 The airflow adjustment ring on the sample I received was a little stiff at first to turn but that is good so it doesn’t move accidentally. There are seven oval shaped holes sitting at an angle for the airflow adjustment. I think they are at an angle to make to let the user more easily adjust the airflow and use partial holes if they aren’t happy with whole hole adjustments. The adjustment ring does have a nice positive stop to it. The top cap has notches in it to make it easier to get a grip on for removing and installing. 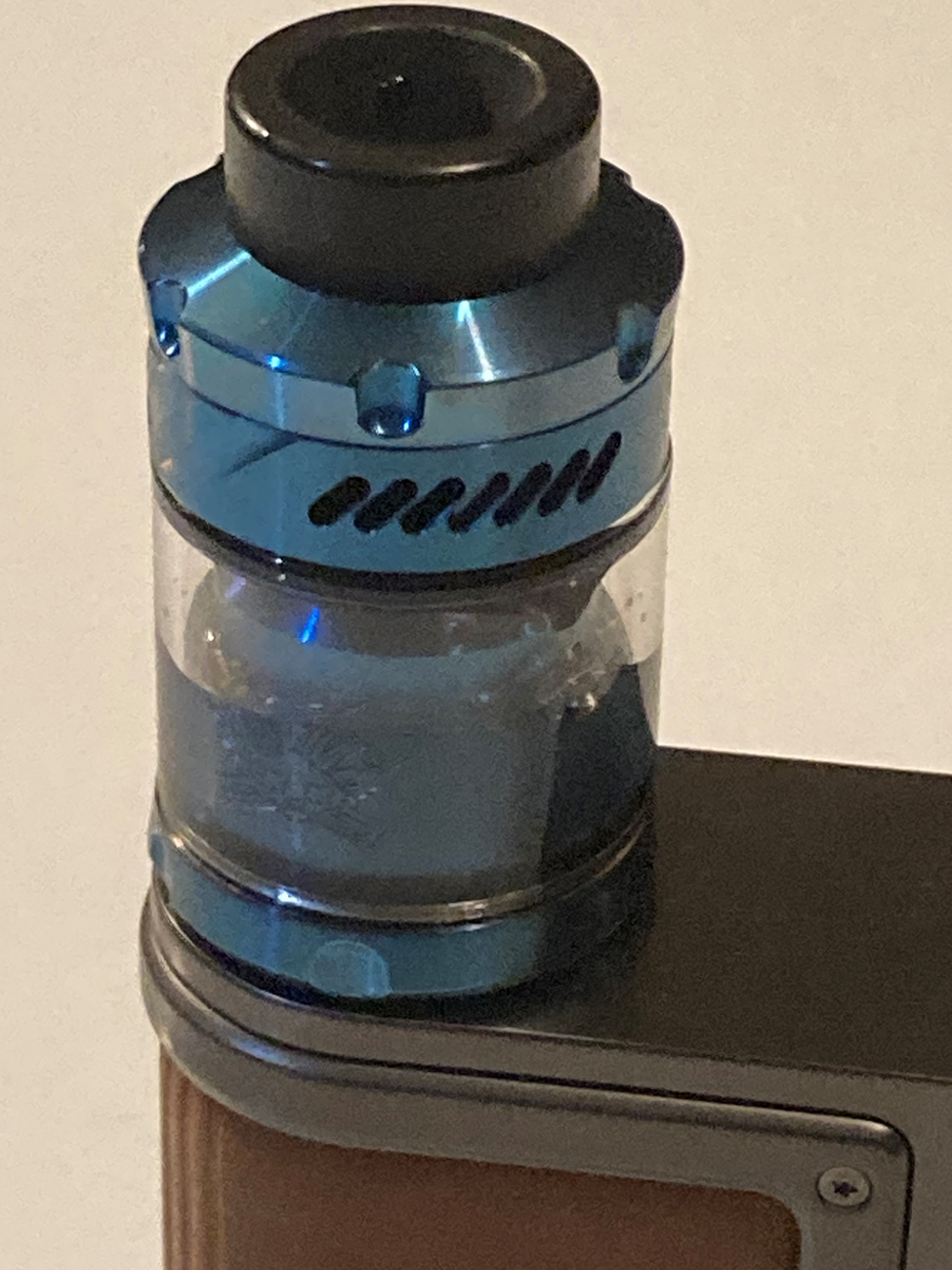 The outside of the chamber has the dead rabbit logo image on one side and Dead Rabbit on the other. It’s a little difficult to see on solid color units like the one I received. I kind of wish they had made the logo and writing in white on mine.

The inside of the chamber is reduced to provide better flavor. It is flat on two sides that match up with the flats of the deck so you need to pay attention when inserting the deck into the chamber. The openings on the sides align with the honeycomb airflow on the deck to provide direct airflow to the coils. 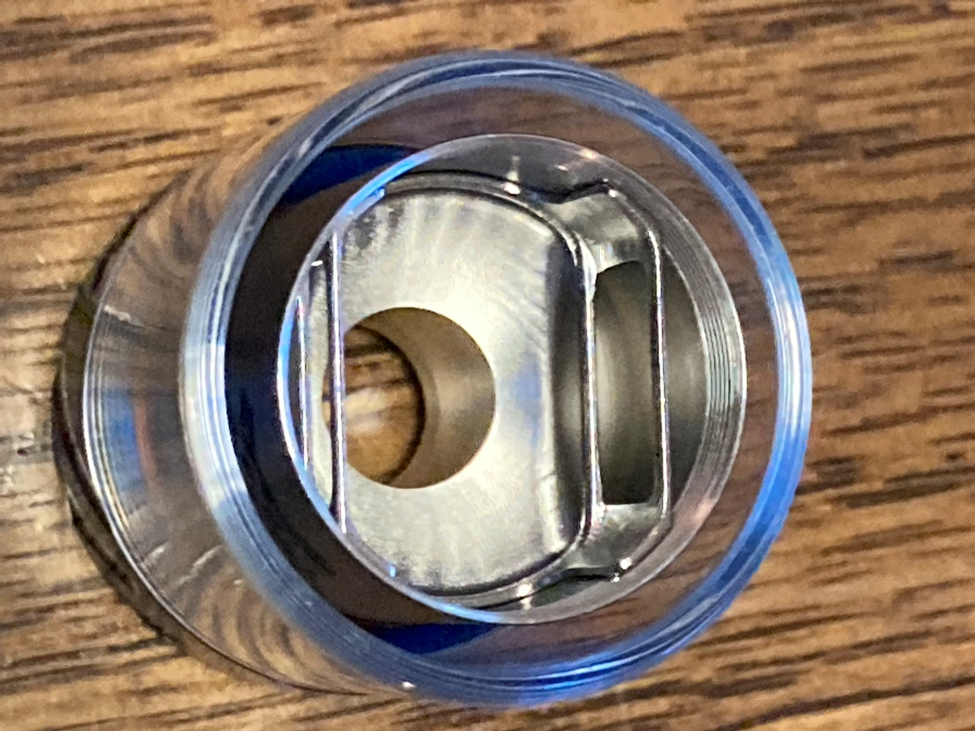 The deck for the DR3 RTA is a postless design with honeycomb and slot airflow. Each raised side of the deck has four round holes and four oval holes to provide the honeycomb airflow and there is a rectangular hole on each end underneath to allow airflow under the deck so you have airflow hitting under and from the sides then being drawn up to the tip. This design has provided very good flavor production during my testing. 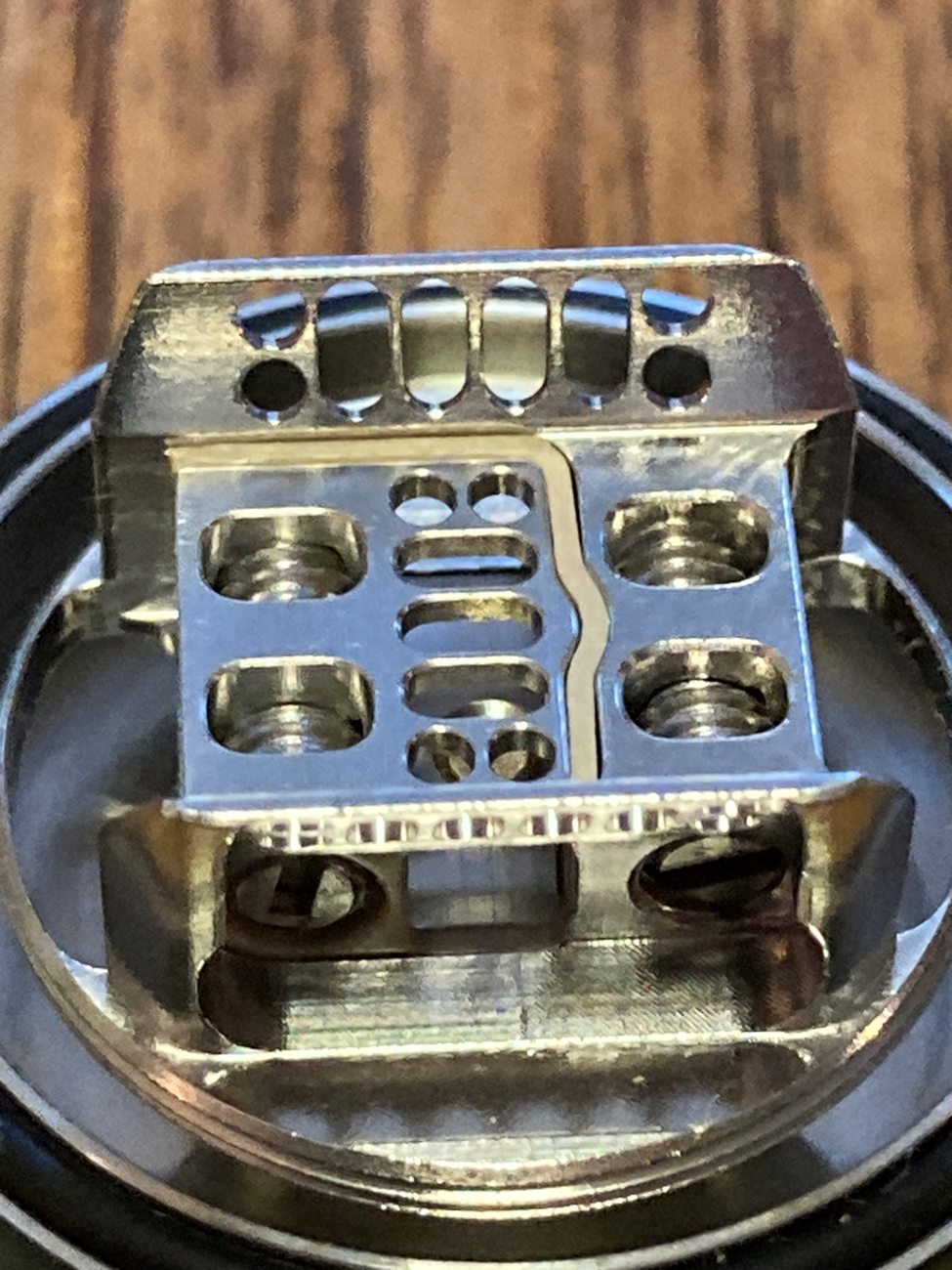 The first picture below is the dual coil build using the two included .37 ohm coils that ended up reading .17 on the mod I was using. The second picture is a single coil build that I wanted to try. It was a 3.5mm Clapton coil that read .59 on my mod. I wanted to see how the performance was with a single coil. It seems like a lot of dual coil tanks don’t do as well with a single coil. The 3.5mm coil delivered very good flavor but I was getting a little spitback which could have been due to my wicking or maybe I thinned the tails too much and too much liquid was reaching the coil.

I made the mistake of reading about building the DR3 RTA before I did build it and for some reason thought that I needed long tails and lots of cotton. That didn’t work out well for me. The first build, the wick wasn’t saturating fully. Also for some reason when I first filled the tank, the deck flooded and I had to turn it upside down to drain some liquid out. I pulled the wicks and tried again after talking with my Hellvape rep. This time was better but it still flooded on the first fill. After that it was ok and flavor was really good. Finally I pulled the wicks and wicked like I normally do where I cut the wicks to the length of the outside of the deck, thinned the tails a little, and put the cotton in. This time there was no flooding and the airflow was smoother than it had been previously. Very smooth indeed and very good flavor. I should have just wicked it like I would normally instead of worrying about how other people are doing it. What made no sense to me was that the flooding was happening when I had more cotton in the wells than I did the third time where it didn’t flood. Anyway, the tank has been running great since that last build and I’m really enjoying it. 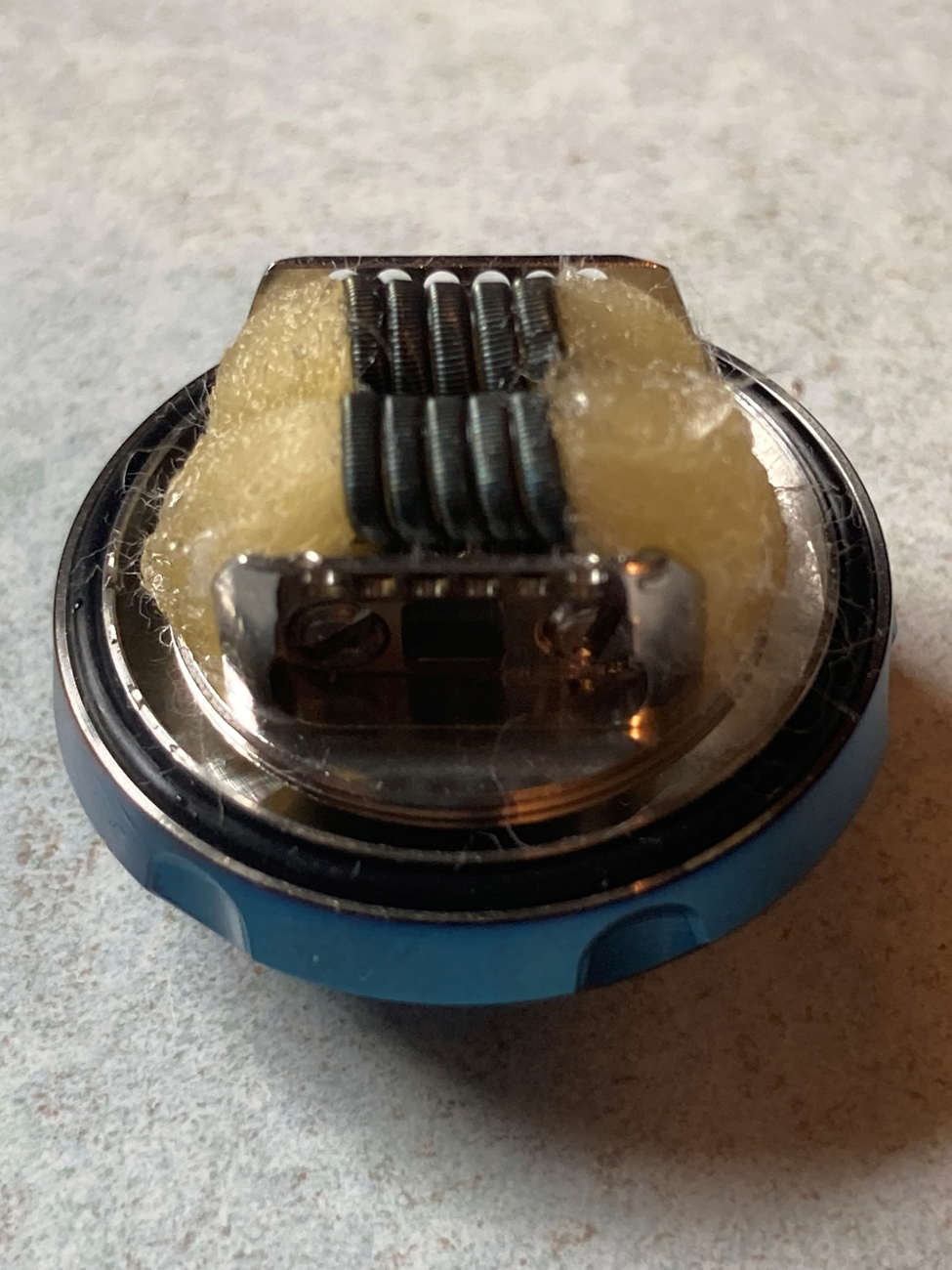 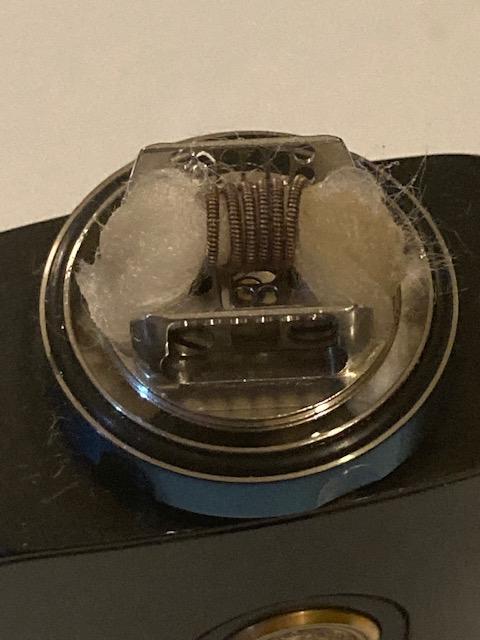 It took a couple tries at wicking but I have very much enjoyed using the Dead Rabbit 3 RTA that was sent to me for this review. I felt like the flavor production was very good and it produced large amounts of vapor.

The DR3 RTA has what I consider to be a lot of airflow available. I never ran it with more than four holes open while running at 59 watts. I ended up actually closing the airflow down first to three holes open and then to about two and a half. Closing the airflow more intensified the flavor and of course made the vapor warmer. I don’t really like a hot vapor but the more I use dual coil tanks I’ve come to realize that a warmer vapor gives a little better flavor and I don’t mind the warmth too much. I guess I’m getting used to it.

The build quality of the tank seems very good. The threads on the deck were smooth and the airflow control had a nice stiffness to it so that it doesn’t move too easily but also has a nice positive stop. I really like the look of the tank with the straight glass but for me it was just going through liquid too quick with the dual coil build so I would recommend using the bubble glass for dual coil operation.

So, would I recommend the Hellvape Dead Rabbit 3 RTA for you? This tank is definitely a DTL or RDL tank. I would probably run some different coils if I was going to do RDL. It provides very good flavor like other Hellvape tanks that I’ve tested. So, yes I would recommend it if you’re a DTL vaper and like plenty of airflow and big clouds.

I’d like to thank Hellvape and Dani for sending the Dead Rabbit 3 RTA for this review. Also I’d like to thank the readers that make it possible for me to keep doing this. Below is a link to the Hellvape website if you’d like to look around. 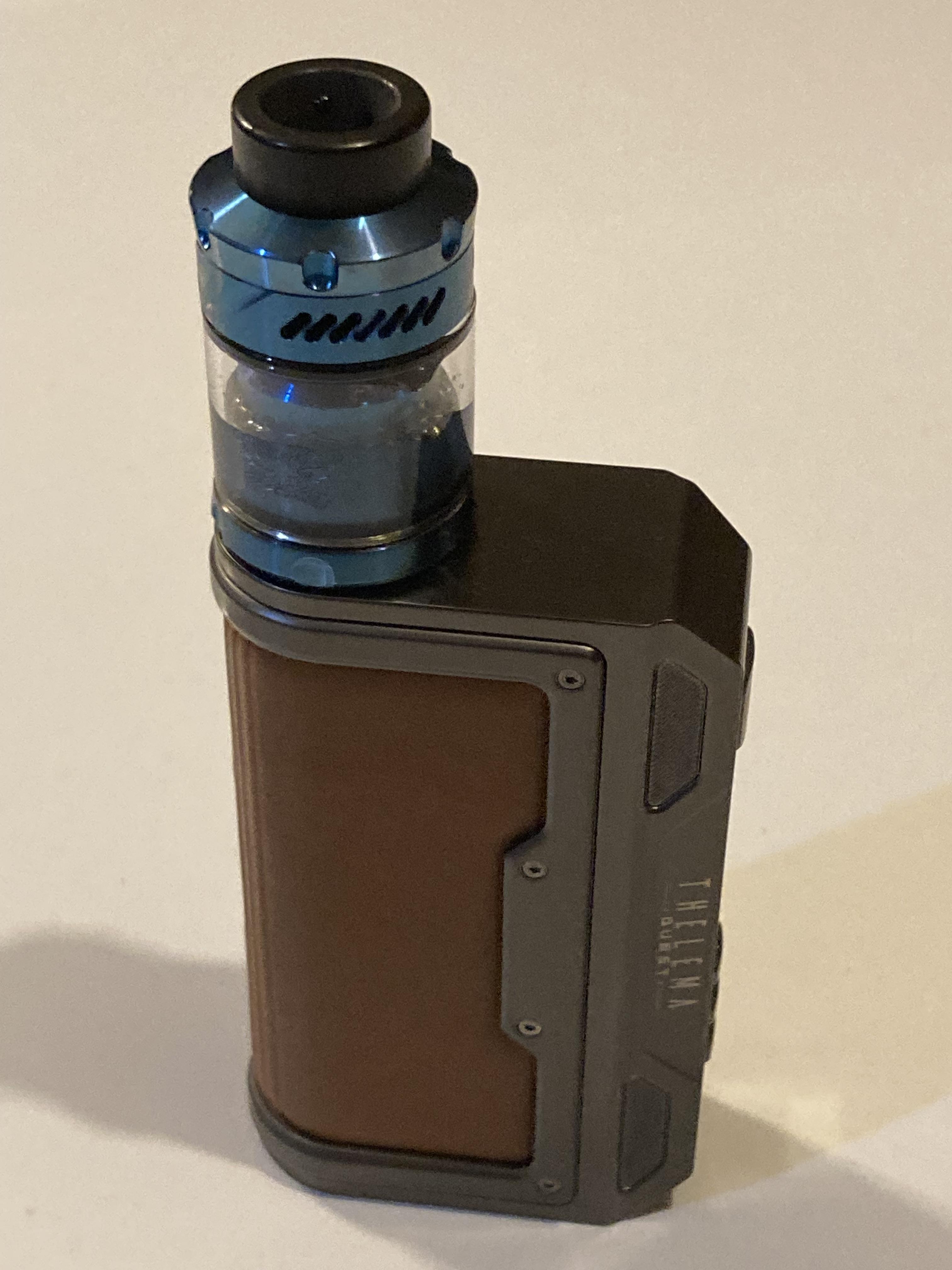 Thanks. Really enjoying this tank after getting the wicking right.
Reactions: Frenkyou
•••