It’s been quite some time since I’ve done a review for Oxva but here I am finally. I was sent the Oxva Xlim SQ by Oxva in order to attempt to provide a fair and honest review. The Xlim SQ is a square shaped pod device like I’ve seen from other manufacturers. As a matter of fact, I just finished reviewing two other small square shaped pod devices. The SQ has a 900mah internal battery which is a step above some of the other similar sized pods I’ve tested. A larger battery is always a welcome addition. I did think it was odd that the Oxva website says that the SQ comes with .6 and .8 ohm pods but the one that I received came with a .8 and 1.2 ohm pods. Evidently there must be two different kits. Anyway, the SQ boasts USB-C fast charging and can charge up to 80% in less than 30 minutes. The pods included in the kit are the Xlim V2 pods like I used on the Xlim V2 when I reviewed it and have a liquid capacity of 2ml which is pretty standard. These pods are compatible with all Xlim devices. One thing that helps the SQ stand out is that it does have adjustable airflow which is an important feature to me. The SQ has an output range of 5-25 watts which is higher than other pods like this I’ve seen. 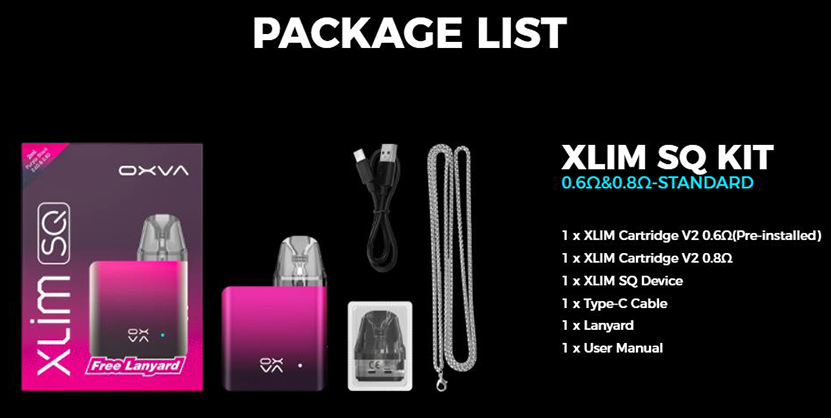 4/Ergonomic AFC
Airflow control on the side to find your best draw precisely. 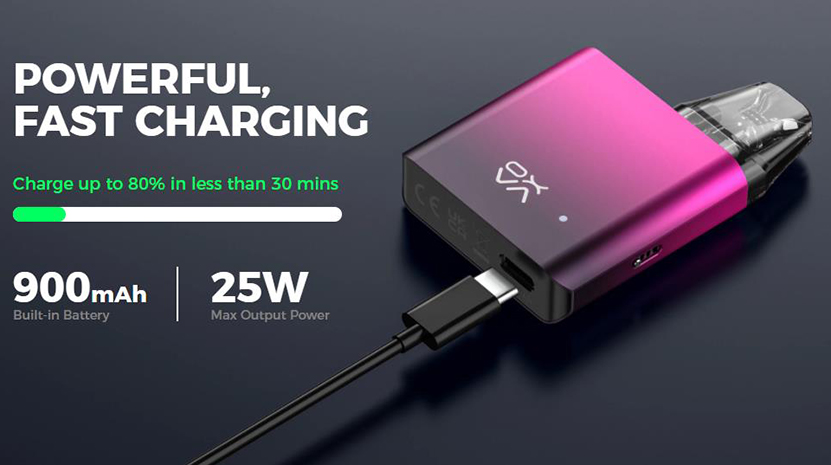 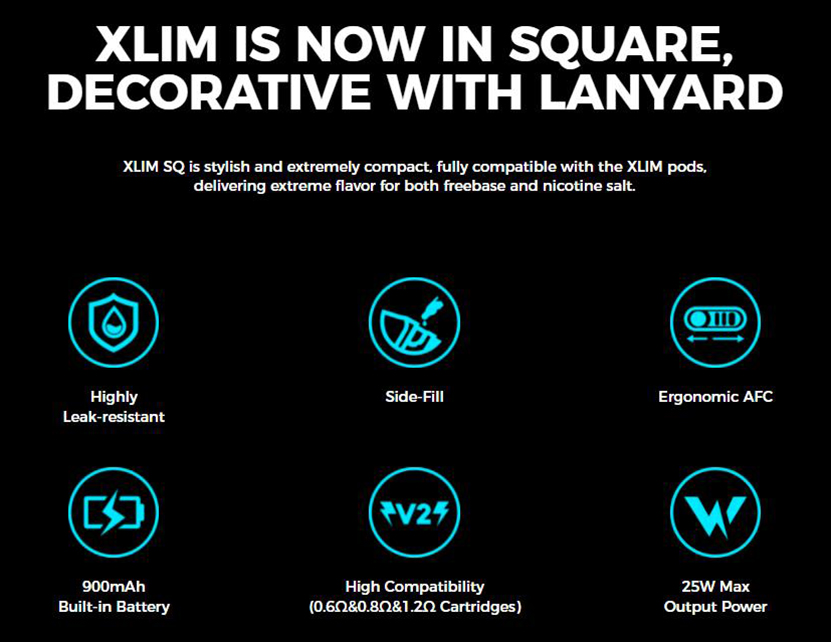 The Xlim SQ arrived in a very bright and colorful box. The color picture on the front of the box unfortunately was not the color version that I received. The one on the box was a nice fade from pink to black but the one I received was just pink. I can honestly say that if I had a choice, I would have picked any other color besides the one I received.

The front of the box shows the Xlim SQ name in large lettering and tells you in the top left corner which version is inside and once again, unfortunately I received the .8 and 1.2 ohm version. I would have preferred to try the .6 ohm pod. Most companies that I do reviews for would have sent one sample of each for a review but sadly this did not happen with this one.

The back side of the box has a brief description, contents list, Oxva company information, and a scratch and check authenticity code. The box for the SQ doesn’t have the normal lift off top but instead opens from either end. The SQ sits in a plastic tray with the .8 ohm pod pre-installed and the spare 1.2 ohm pod, lanyard, USB-C charging cable, and user manual are sitting underneath the plastic tray when you slide it out. 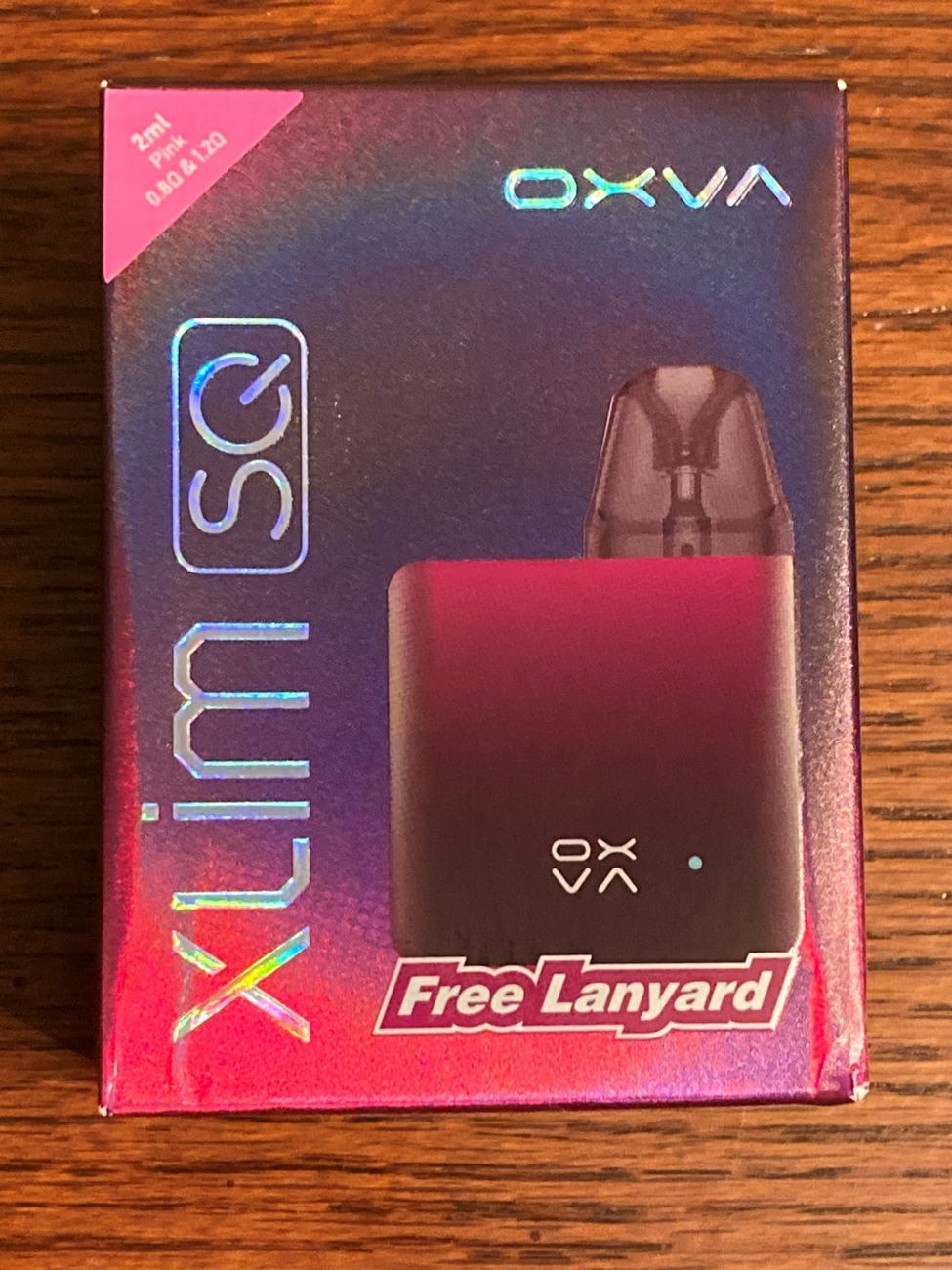 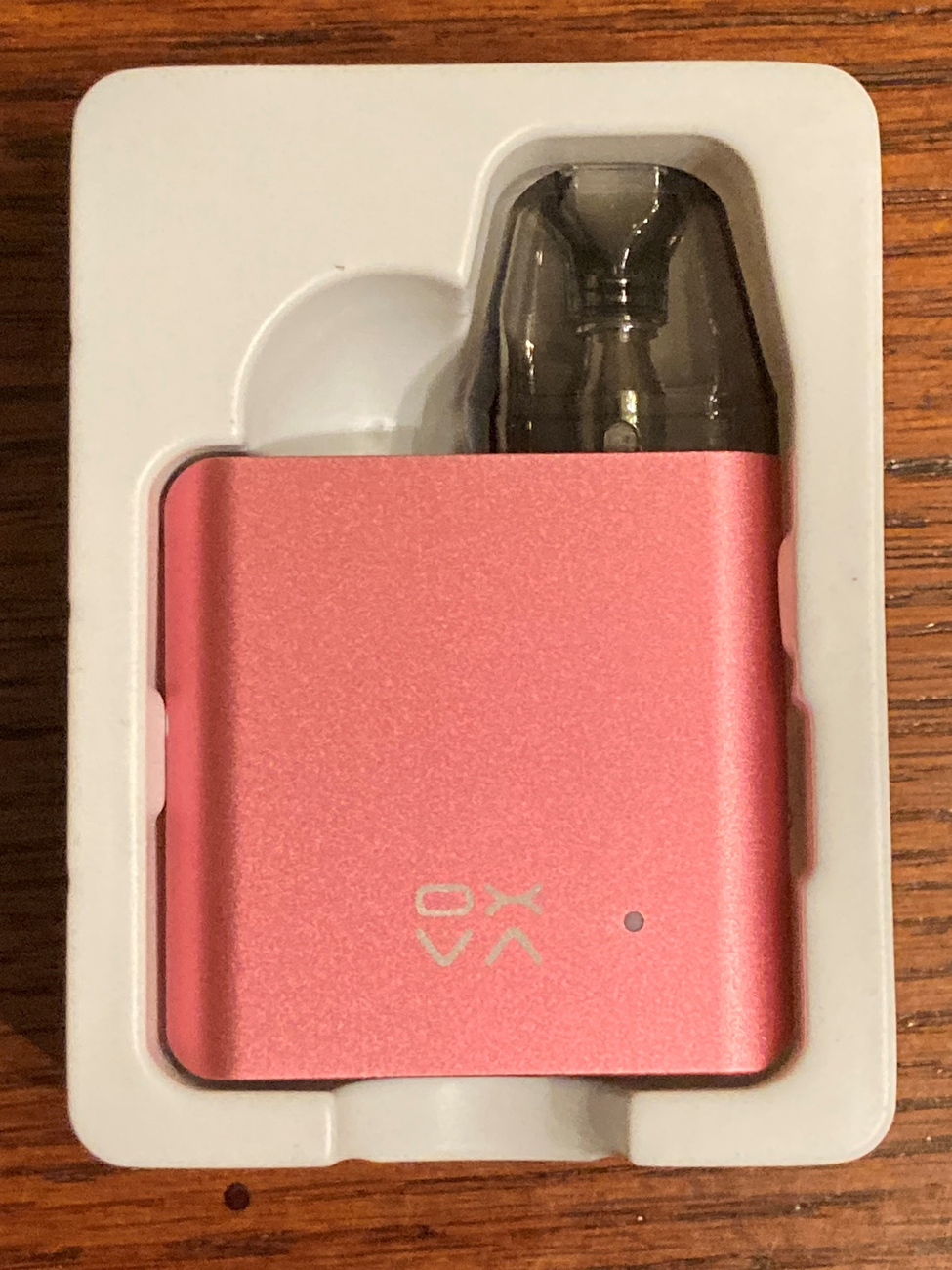 As you can see in the picture above, the front of the SQ just has the Oxva name and a single indicator light on the front. The light tells the user what the battery level is. It starts out with green then switches to blue and then red as the battery drains.

The opposite side has the Xlim SQ name printed on it and nothing else. 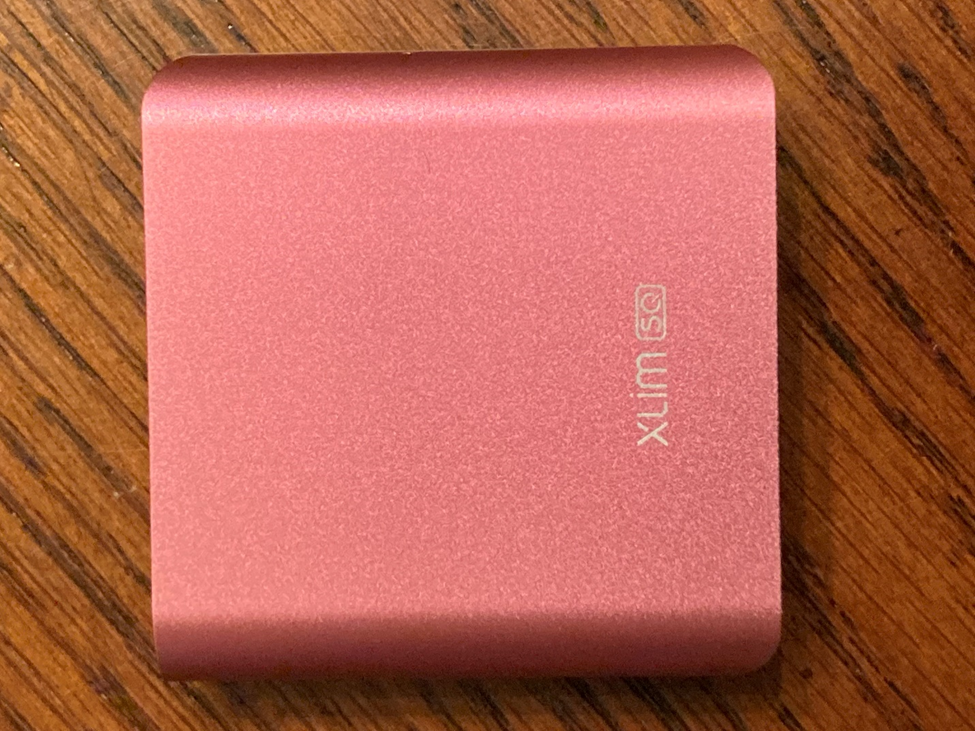 On one end there is the airflow adjustment. There are three airflow holes and the airflow can be adjusted from a tight MTL to an RDL. Once again, I wish I had gotten the .6 ohm pod to try it out in RDL. On the opposite side are the two openings in the aluminum body that provide a place for you to connect the included lanyard if you choose to use it. Myself, I don’t like lanyards and don’t use them. However, the SQ is very lightweight and could easily be hung from the neck by a lanyard without feeling heavy. 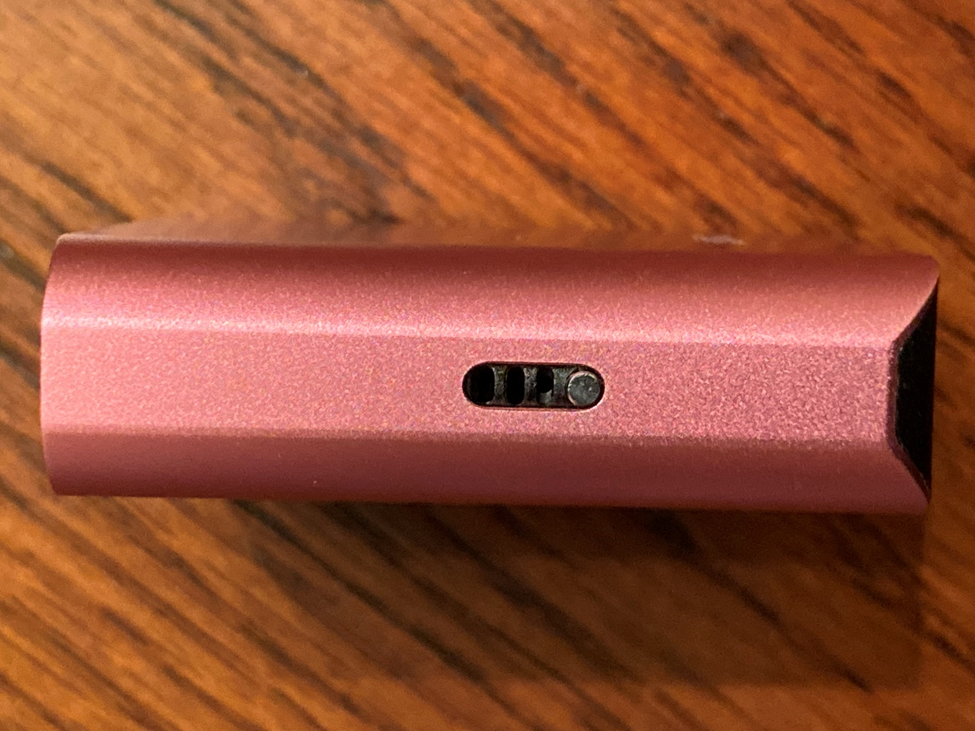 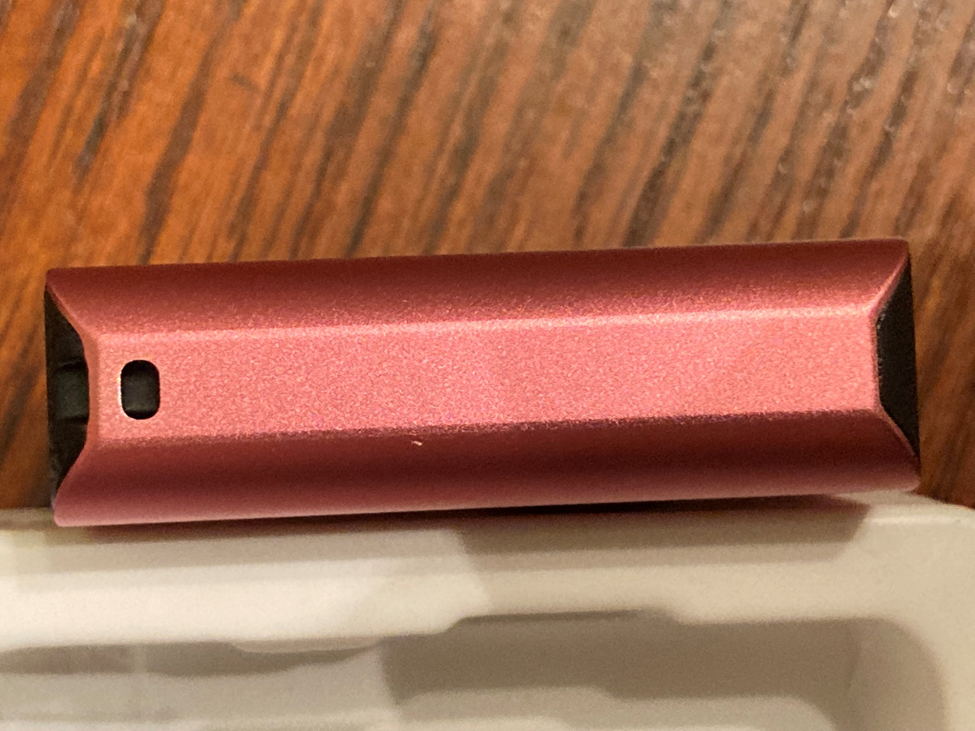 The top of the SQ has the pod opening has the standard gold plated spring loaded contacts as well as two magnets to hold the pod securely. Also is the raised airflow inlet for the auto draw. It is raised on this one and many others I’ve seen in order to prevent liquid from getting into the opening and causing the unit to fail. Also on top is a textured black section which is more of a decoration than anything. It almost looks like it is rubber but it is just hard plastic. The bottom of the SQ is where you will find the USB-C fast charging port so you won’t be standing this one up to charge. Not a big deal to me. 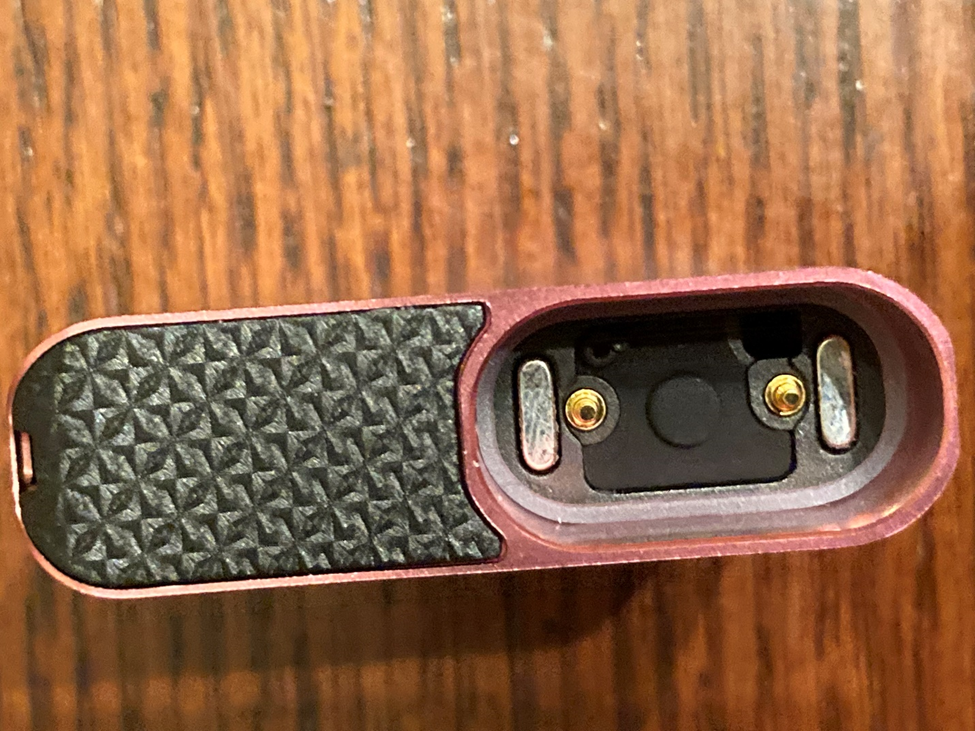 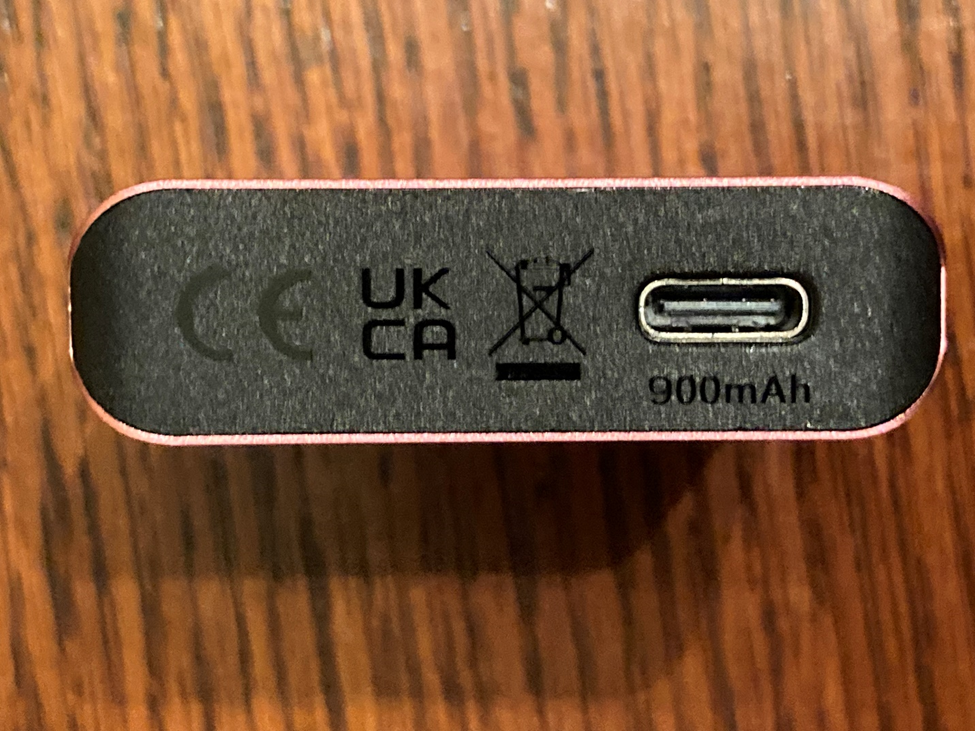 The pods included with the SQ are the Xlim V2 cartridges. They are available in .6, .8, and 1.2 ohm resistances. They are compatible with all versions of the Xlim. The cartridges are slightly tinted and not clear like they appear in the pictures below. However, you can still pretty easily see the liquid level in normal lighting. When the liquid level gets to the level of the body of the pod then it’s about time to refill. 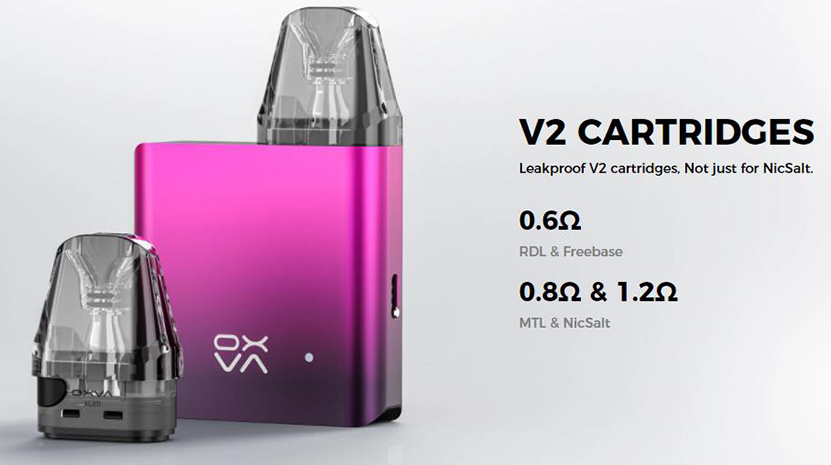 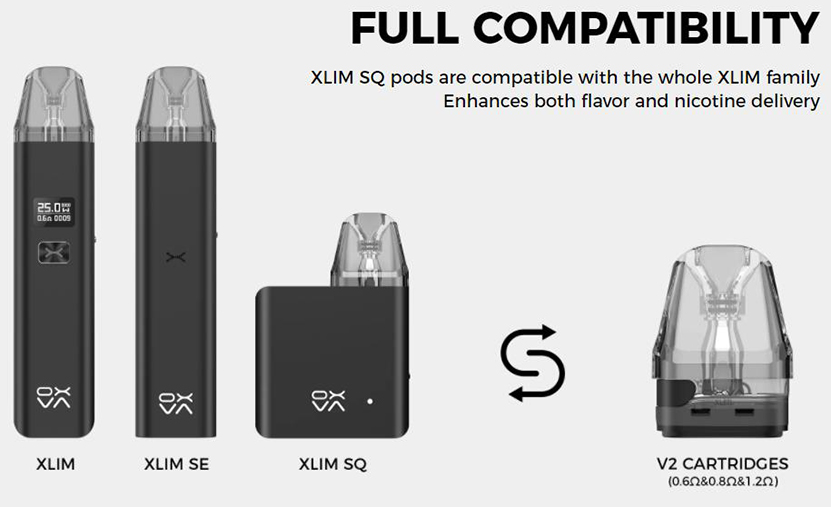 The pod that comes pre-installed is the .8 ohm pod in my kit that is rated for 12-16 watts and comes with a plastic cover over it to protect it from being fired before filling. The spare pod in my kit was a 1.2 ohm rated for 10-12 watts. Both pods have two magnets, two gold plated contacts, and two airflow holes.

The pods are a side fill with a rubber plug. I would have much preferred a top fill as that is what I prefer to use when using pods. I don’t have good fingernails and had a bit of difficulty opening the rubber plug at first. Once open, I was able to fill with a plastic 10ml bottle easily without making a mess. I found the mouthpiece very comfortable to use. 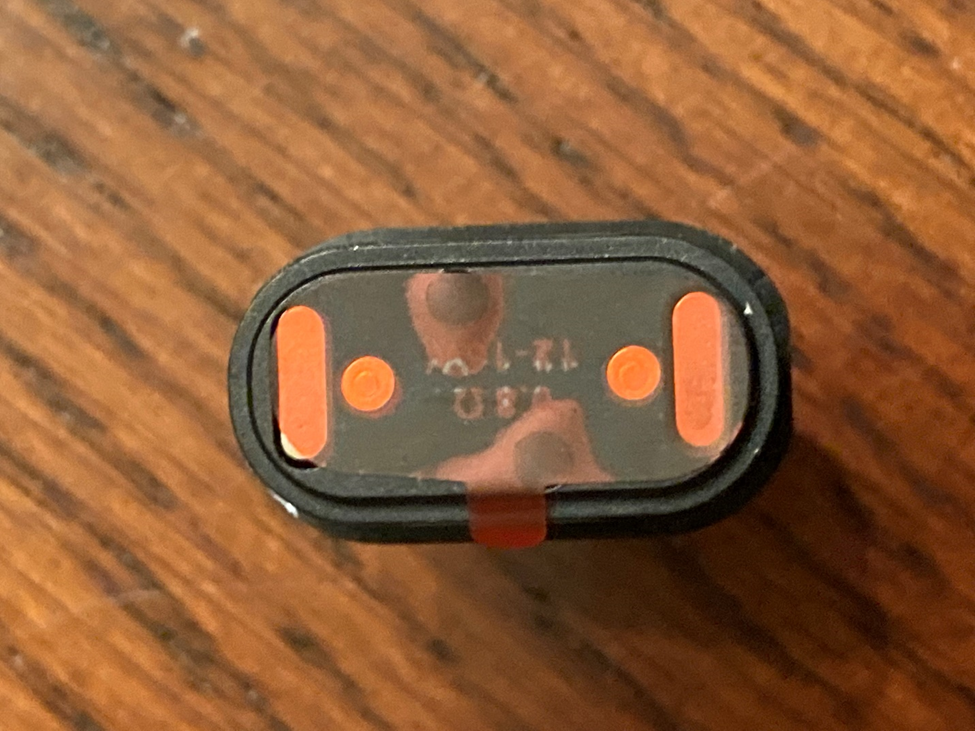 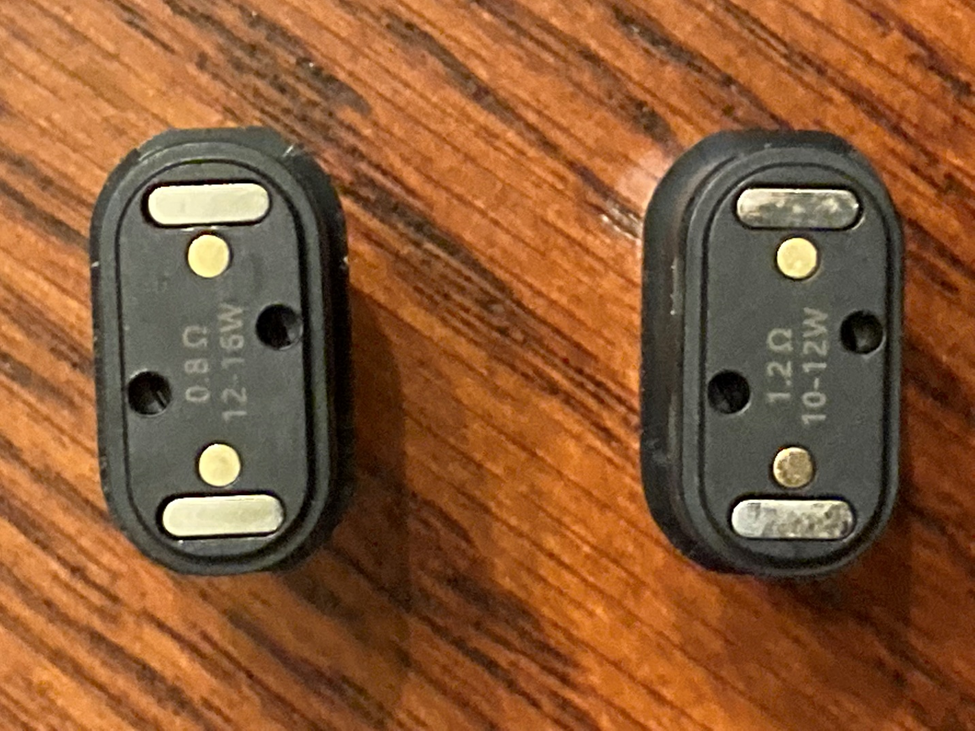 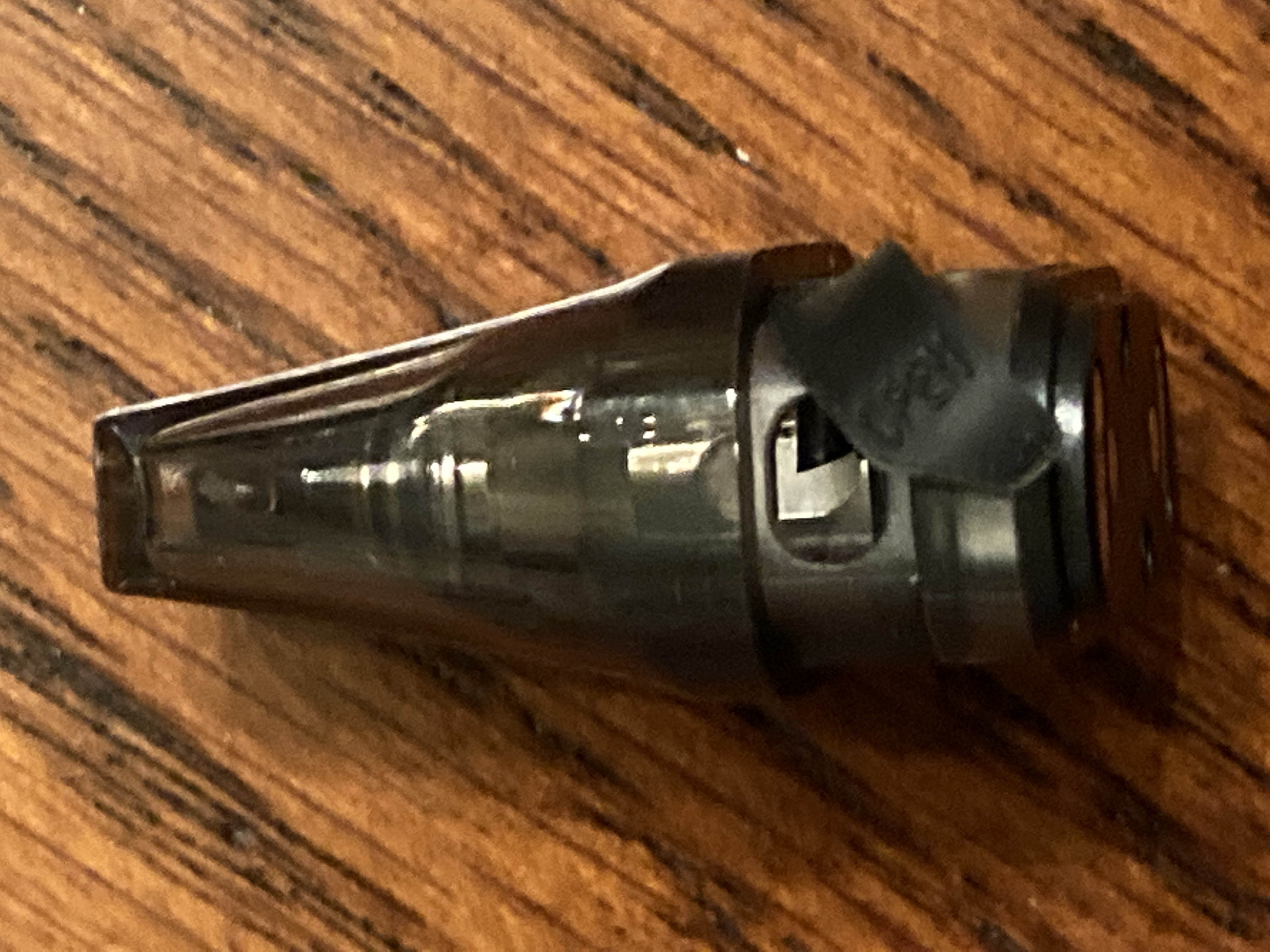 I felt like the Xlim SQ delivers on what it promises to do. Although I don’t care at all for the color that I received for the review, it delivers a nice throat hit and pretty good flavor when using the .8 ohm pod. The 1.2 ohm pod was a little low on output for me. I had to tighten the airflow down quite a bit to warm the vapor up and boost the flavor some. It wasn’t bad. As I mentioned earlier, I think the SQ would have come alive for me with more output had I received the kit version with the .6 ohm pod.

I do like that Oxva was able to incorporate a 900mah battery where others of similar shape or size seem to be 800mah or less. I have recently tested several that were 800mah and could definitely tell a difference in how much liquid I was able to go through compared to the lower mah batteries. Most 800mah batteries allow me to go through 3-4ml of liquid and was able to fill the pod twice and a little more before the battery had neared its end and I could tell that it was time to recharge since the output seemed reduced. When you’re dealing with a 2ml pod then another 100mah can really make a difference.

So, would I recommend the Oxva Xlim SQ? If you’re looking for a small square auto draw only pod then this is a good one. If you like lanyards then that’s another plus for you. The extra battery capacity and fast charging are definitely something to take into consideration. I personally prefer top fill pods but if you don’t mind a side fill then this might be a good one for you.

I’d like to thank Oxva and Jocelyn for sending the Oxva Xlim SQ for this review. Thanks also to the readers as you have made it to the end of another one of my reviews. Below is a link to the website if you’d like to take a look around. 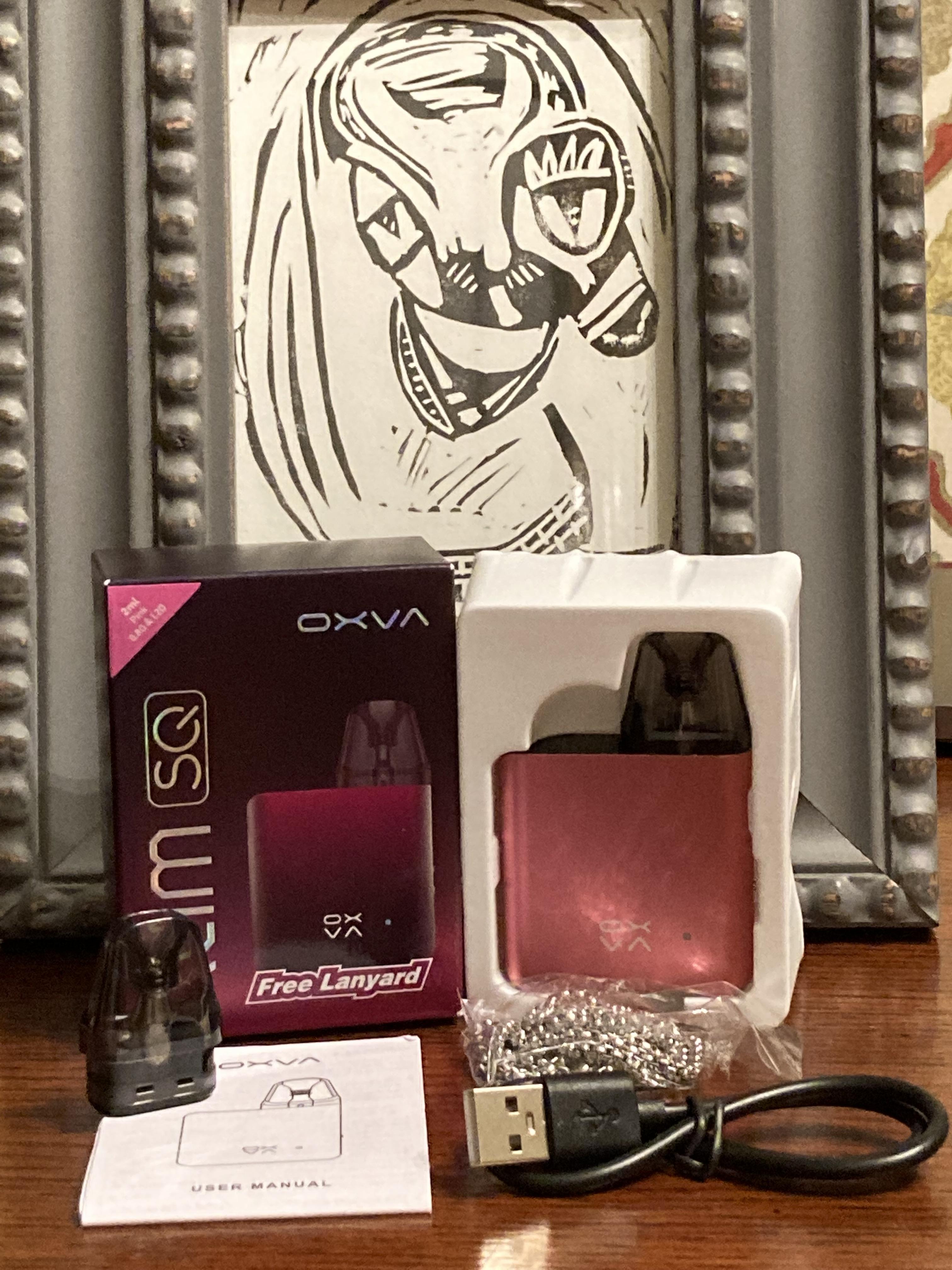 Thanks for another detailed review @hittman. I might not want to buy all these pods but it's interesting to know what's out there.
Reactions: hittman
•••

Pigs said:
Thanks for another detailed review @hittman. I might not want to buy all these pods but it's interesting to know what's out there.
Click to expand...

Yes, no one needs all the pods that I’ve tested but hopefully it’ll help people decide which ones might work for them.
Reactions: Pigs
•••

Just a little follow up on the Xlim SQ. My rep from Oxva saw that I didn’t like the pink sample and that I didn’t get the .6 pod to try so sent me a new sample and a box of pods. The .6 pod is a game changer for me. I really like it. Thanks Oxva!