Hi, today let's take a look at voopoo vinci Pod SE. In this Test I will examine each of the characteristics that distinguish this item. I hope that by the end of this reading you may have understood this product, and therefore decide whether to invest in it or not. As always, my opinions are free and based on my personal experience.

► VooPoo Vinci Pod SE; Packaging:
The standard packaging with which the device arrives is gray with gold watermarks, has a transparent window on the front that allows you to see a part of the device it contains. On the back of the box are shown; the packing list, warnings, addresses and contacts of Shenzhen Woody Vapes Technology Co. Ltd (VooPoo). 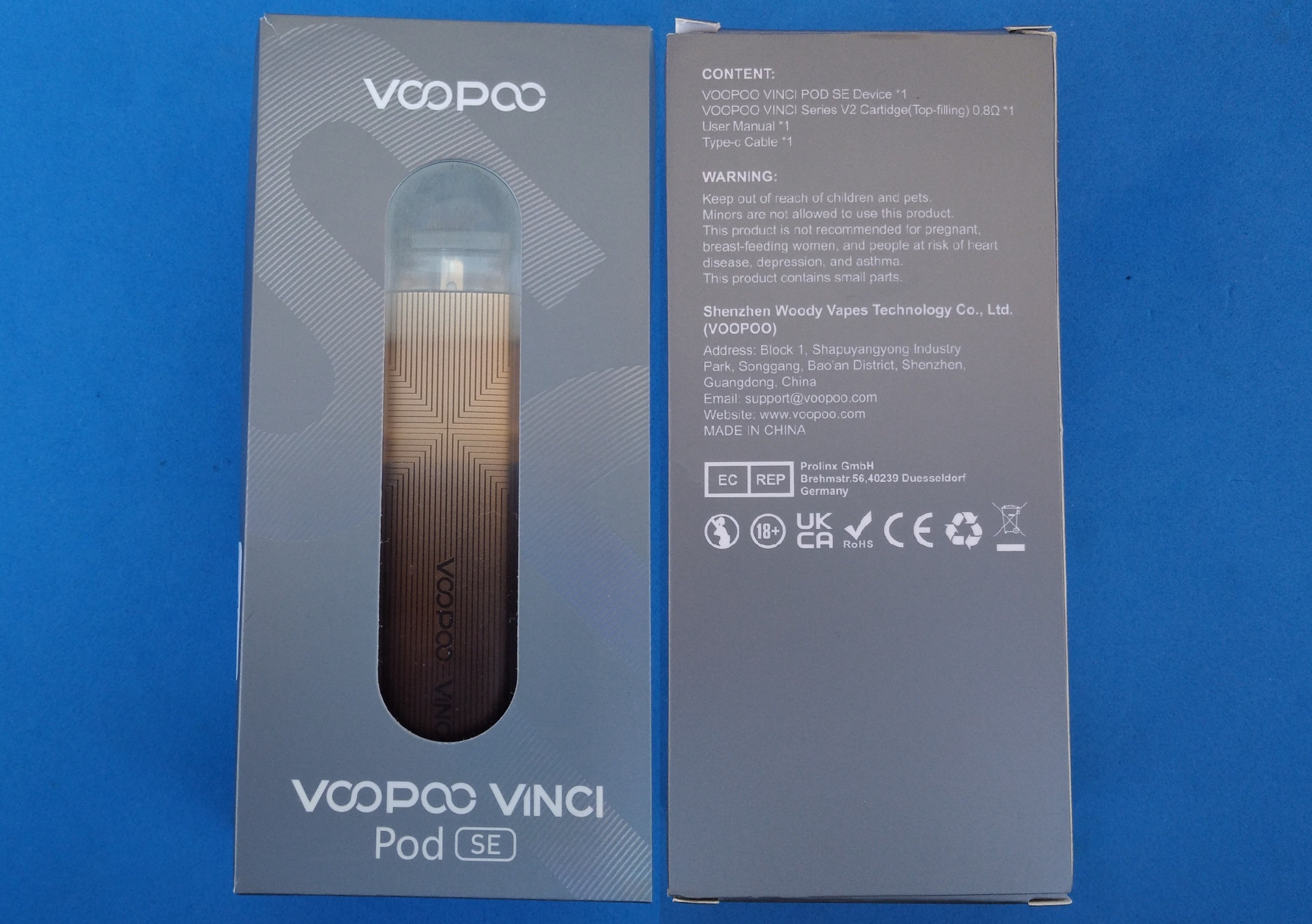 On the side of the package you can see; the main features in the form of icons, the wording "sample", various QR-Codes, the scratch & check and the type of coloring (Coffee Brown) of this Sample. 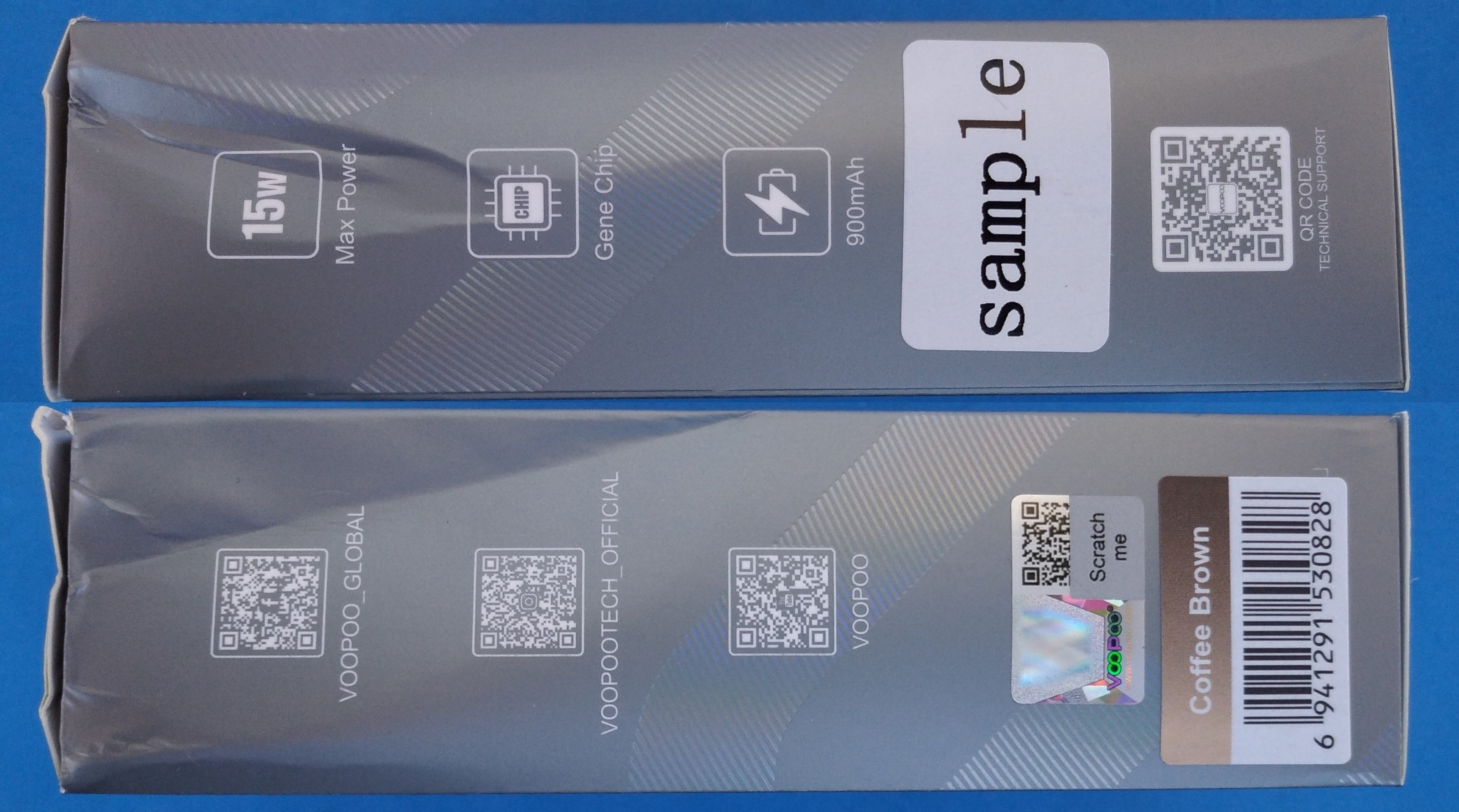 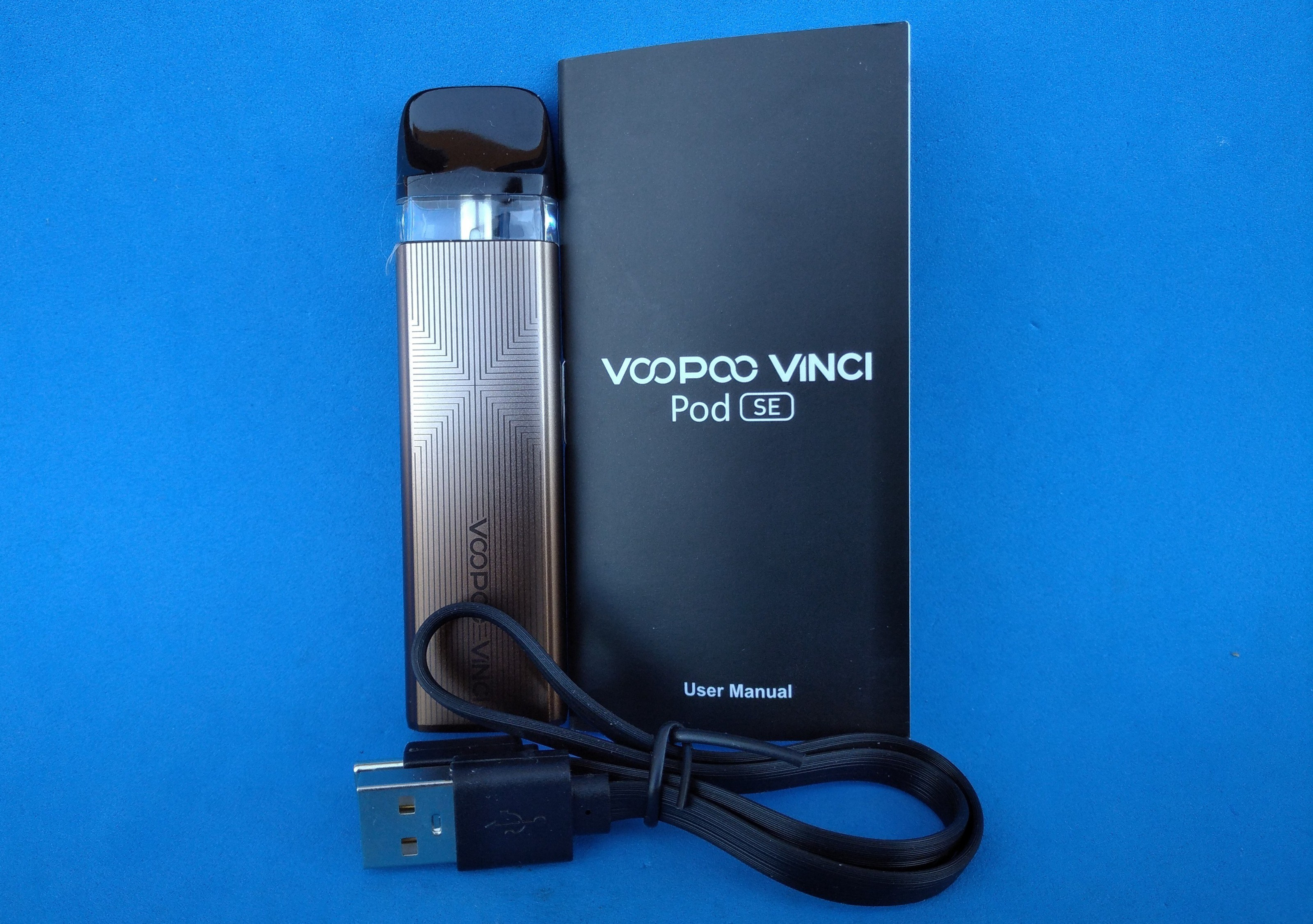 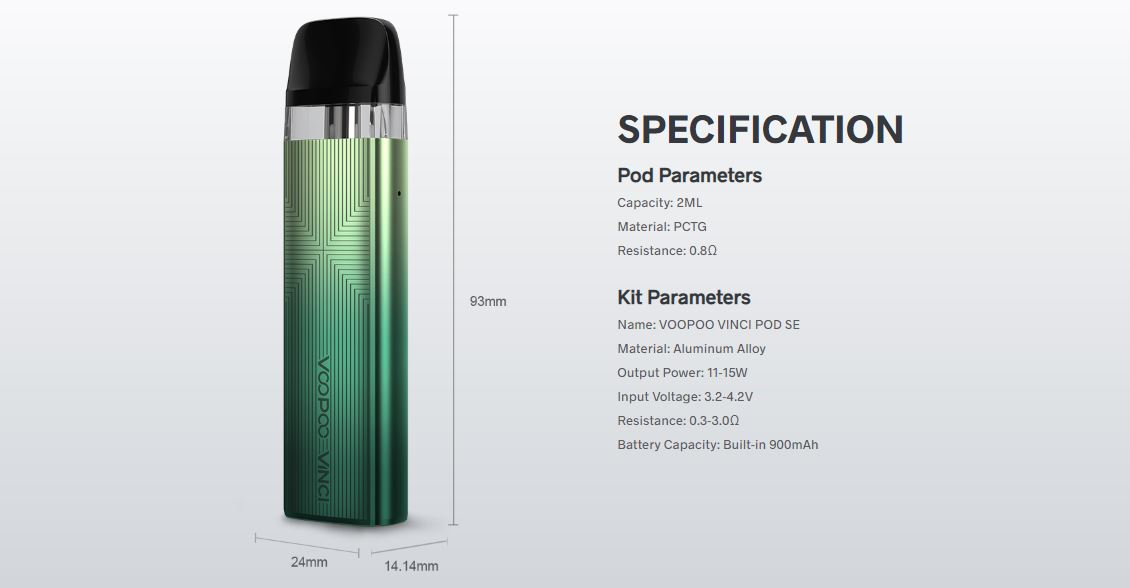 ► VooPoo Vinci Pod SE; First Impressions:
The great success that Vinci Pod has achieved in its various versions has spurred VooPoo to continue to bet with courage on this project, because there are an infinite number of Pod kits, perhaps too many, but the starter kits are rarely so beautiful! VooPoo declares; "Our original goal is to explore the artistic and cultural value of the Pod as an object in itself, to allow users to express their artistic taste while using the product." How to blame him? Personally I really appreciate the passion and emotional involvement of these words by the Marketing Director of VooPoo.

We are therefore not talking about a completely different VINCI POD device compared to those that preceded it, but about a "basic" reinterpretation of a very successful product. The device weighs just over 40g with a size similar to that of a common lighter. These features make the VINCI SE Pod Kit an extremely portable device. The overall design appears minimalist and sober but absolutely not trivial due to its simplicity. 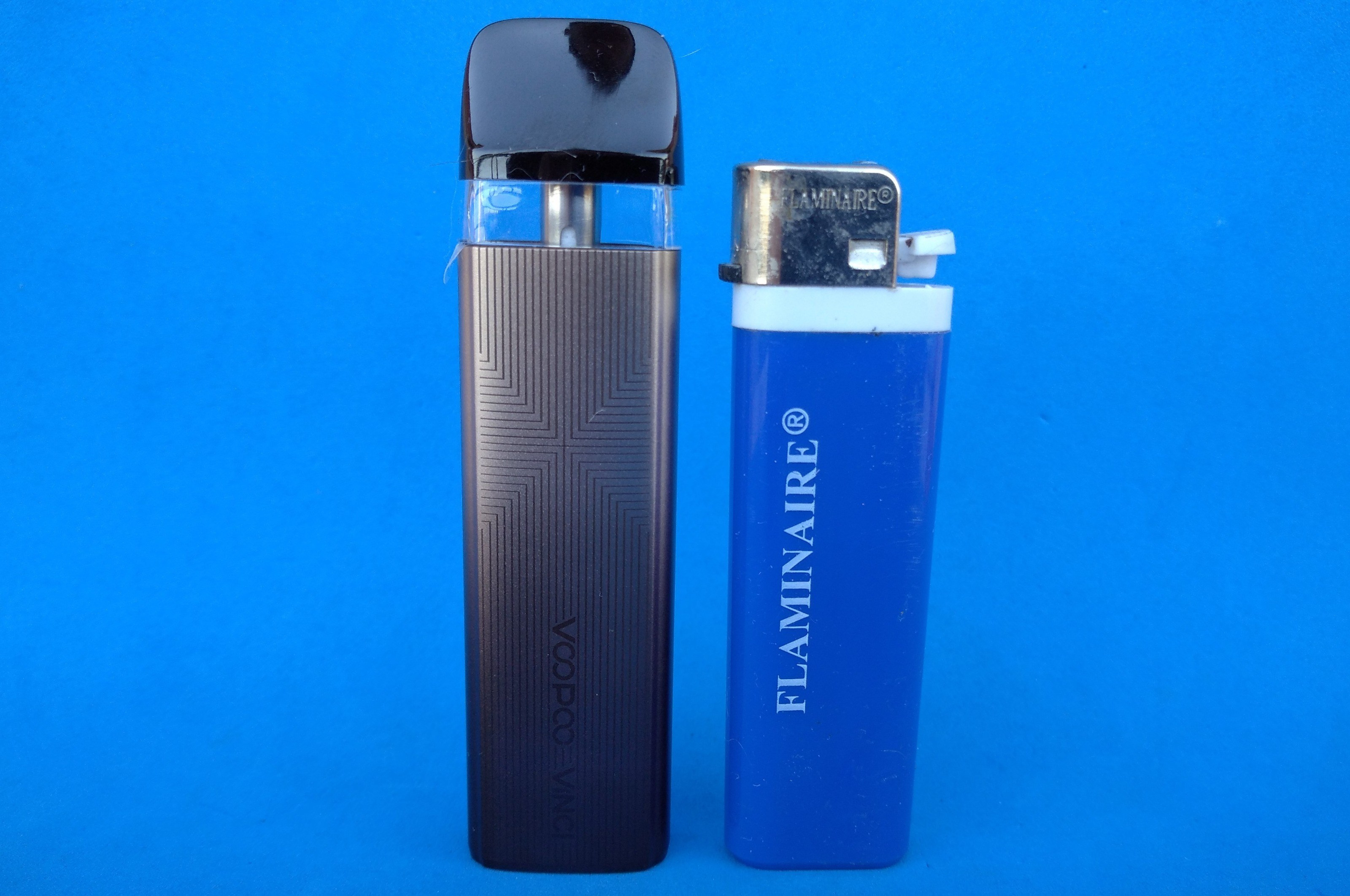 Among the technical features we also find a slight increase in battery capacity which from 800mAh of the original version (Vinci 15W) now goes to 900mAh. VOOPOO's ITO feeding technology with the special 4-hole anti-leaking cartridge has been updated and the convenient top filling has been retained, also the Vinci SE cartridges are compatible with VINCI POD, VINCI Q, VINCI POD Royal Edition and Drag Nano 2. 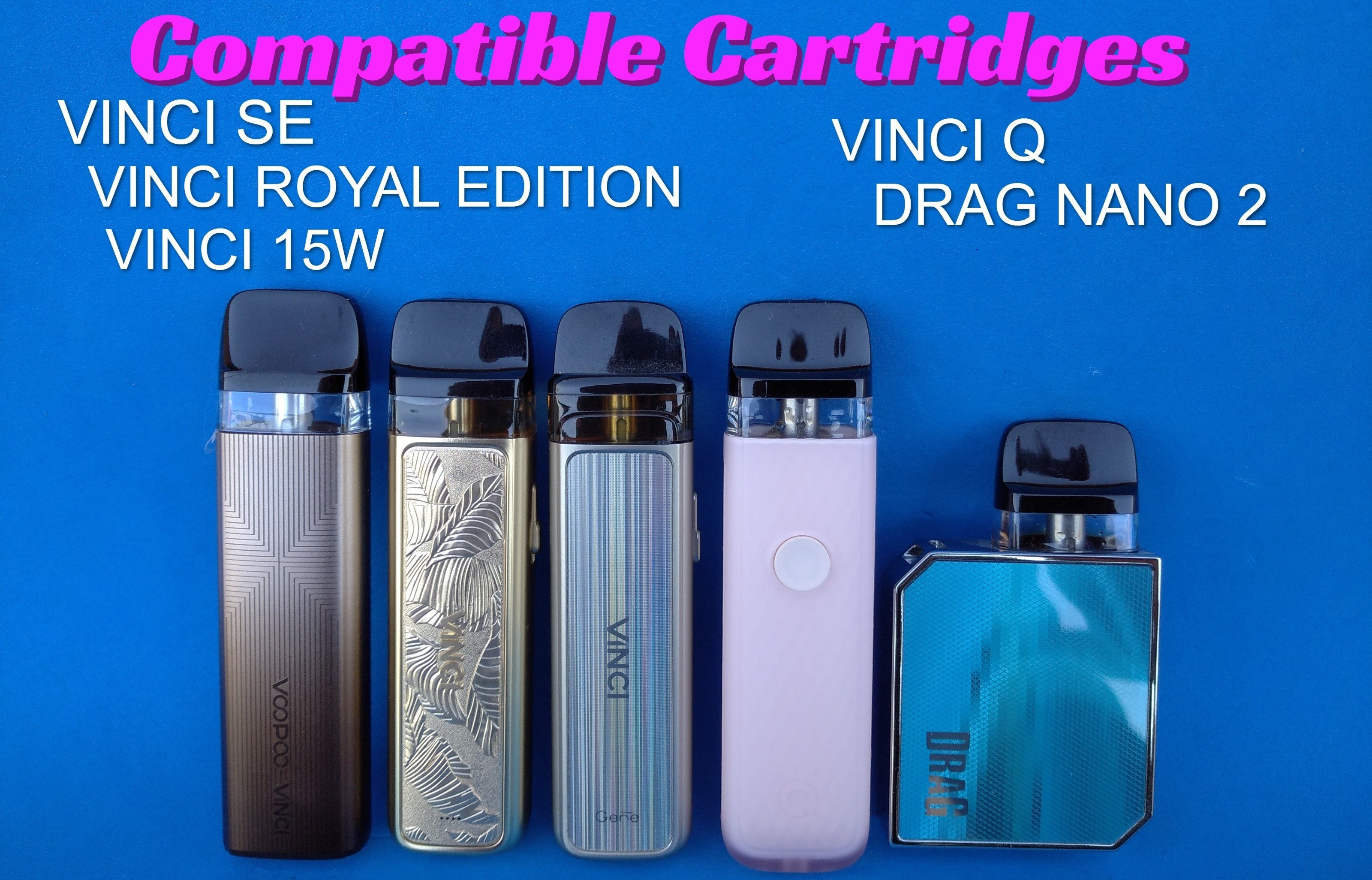 The "minimalist" version of Vinci Pod is now updated with a sober graphic design but of fine workmanship, the decorations are obtained from a very fine texture of vertical and horizontal lines that blend closely together, with a background of shaded color towards the low and bright upwards.

The ease of use of Gene chip derives from the fact that the mod does not have the display and not even the control button, Vinci Pod SE only has the "automatic puff!" Notifications are sent by the LED in the form of light signals with different colors, steady or flashing lights as follows:

► VooPoo Vinci Pod SE; 5V-1A Type-C Charging:
The Type C charging port has been placed on the side of the Mod's body and this allows the device to stand upright while charging avoiding possible damage due to improper placement of the device. 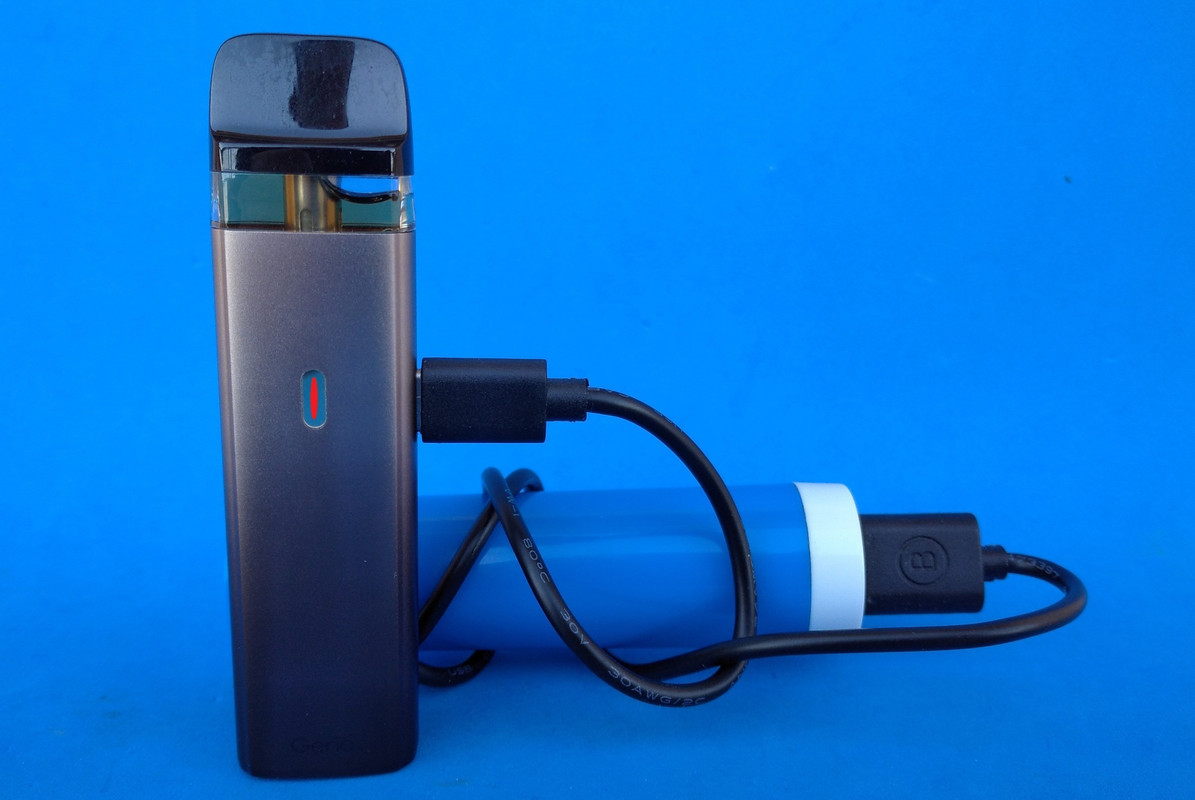 ► VooPoo Vinci Pod SE; View Below & Above:
So, as we have seen, the support base of VINCI SE guarantees a stable foot to keep the Mod vertically even during charging. In the center of the support base there is a vent hole for the battery, this safety system should never be missing, good VooPoo!

The compartment / pod is devoid of magnets, the circuit and the system for receiving the intake signal are protected by two perforated and raised pins (anti-liquid). The two electrical conduction pins are floating and gold-plated. There are also two opposing holes inside the compartment, for the air flow which are communicating with the outside.

► VooPoo Vinci Pod SE; Air flow System System:
The narrow sides of the Mod are smooth and echo the pleasing shades of color found over the entire area of the VINCI SE. At the top there are two opposing holes of about 0.8mm in diameter that convey the external air directly into the compartment / pod and towards the coil integrated in the cartridge.

► VooPoo Vinci Pod SE; Cartridge:
The Kit comes with a 2ml capacity disposable cartridge, the body / pod has a large transparent section to facilitate the control of the internal e-liquid. The built-in 0.8Ω resistor should deliver a maximum power of 15W (battery charged). This 0.8Ω cartridge has 4 holes at the base and according to VooPoo technicians the cartridge with 4 holes captures a sufficient flow of air from every direction, to return a smooth and balanced taste to the user.
The integrated airway structure improves the watertight function and an internal condensate isolation chamber with a micro-pores structure drains the condensate down and isolates it at the bottom of the cartridge and then returns it to the circulation through the air flow and for be vaporized later.

These ITO cartridges have an updated refil, the filling now takes place from the top, simply by removing the cap and lifting a silicone tab, the operation can also be carried out while keeping the cartridge inserted in the device. The spout is anatomically shaped for the lips, and has been made antibacterial with a silver ion treatment. the result is an antibacterial rate of over 99%! This allows for a reassuring vaping experience. * During the first use phase of the new cartridge, it is advisable to wait at least five minutes for the cotton to soak in liquid.
* VooPoo, to limit any spitting phenomena, recommends not filling the cartridge more than 2/3.
* The VINCI POD SE cartridge is compatible with VINCI POD, VINCI Q, VINCI POD Royal Edition and Drag Nano 2.

► VooPoo Vinci Pod SE; Final conclusions:
It is a compact basic kit, with "disposable" anti-leaking cartridges (ITO atomization technology by VOOPOO), with new and convenient refill from the top. With the battery charged and up to the battery charge limit (red led 30% of residual charge) the puff remains constant, the resulting vape quality (coil 0.8Ω) provides impressions compatible with those of declared power (15W). The device is equipped with a GENE.TT 2.0 chip with integrated 900mAh battery, type-C charging port and notification LED. The automatic aspiration is the only mode available for Vinci SE but it works well and is very reactive to every solicitation.

VooPoo Vinci SE with the new 4 airflow cartridge is able to give an excellent flavor with a fairly smooth MTL extraction, by plugging with your fingers one of the two holes on the body of the Mod it is possible to increase the Hit, obtaining at the same time a MTL type extraction rather contrasted and profitable. Furthermore, VINCI SE seems very limited in the consumption of e-liquid, a full (2ml) lasts a long time, with a full battery charge cycle you can consume about 4ml of e-liquid. The battery takes approximately 60 minutes to fully charge. The design, materials and sober decorations of VINCI SE are an added value. In addition, the device has the same reliability as the previous Vinci Pod models, resulting in improved reliability of the anti-leaking system, so I feel like promoting it with flying colors.

I would like to thank Nical from Shenzhen Woody Vapes Technology Co. Ltd (VooPoo) for providing me with the kit. I hope this contribution of mine has been useful for anyone wishing to purchase VooPoo Vinci Pod SE. Great review! Going to be working on mine as well
Reactions: Frenkyou
•••

HyDrOpOnIc1987 said:
Great review! Going to be working on mine as well
Click to expand...

Thanks guys, I'm glad you like it.
Reactions: hittman
•••

Hi, I made a mistake during the layout of the images, I loaded the image of the new 0.8Ω cartridge showing the bottom with the 4 air-flows (corrected image). While the image of the top (wrong image) belongs to the previous Vinci cartridge which used the sealing gasket. The new 0.8Ω VINCI Pod Cartridge can be refilled even faster and conveniently via a membrane port, so you can refer to the images below ...
Thank you. 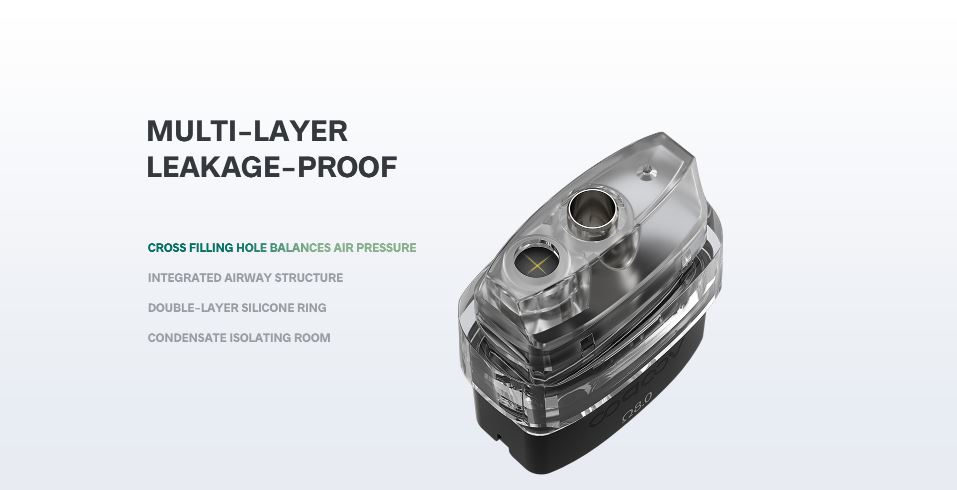 Thank you dennism
•••
Show hidden low quality content
You must log in or register to reply here.