Today I have a review for the Aegis Squonker kit, the kit was sent to me by Geekvape for this review. Geekvape is a well-known brand and the Aegis Squonk kit is the next box mod in the Aegis series, this one is however special as it’s a squonker! To be fully honest this is my first ever squonker even though I have been reading a lot and was planning to get myself one. For this review its great as I can experience this as a ‘Squonk-beginner’. 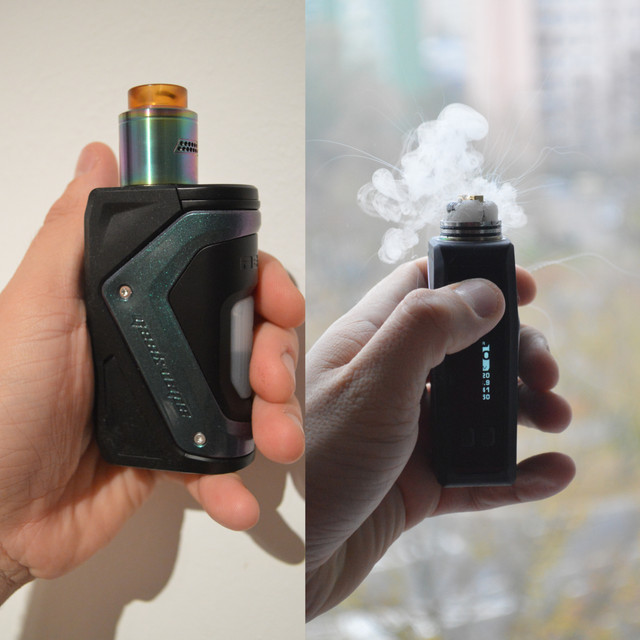 The kit contains if the Aegis Squonk mod, which has the exact same chipset as the Aegis Solo and looks like it from the front, and the Tengu RDA, which is not a new RDA but has been on the market for a while already.

A cool and unique thing about this squonker is that it is modular and you are able to separately purchase a piece that replaces the squonk part and turns the mod into a single battery mod, size wise between the legend and solo. Unfortunately, it is not included in the kit and I also did not receive one, but I will buy one myself

Let’s jump right into it, what do you get in the kit? 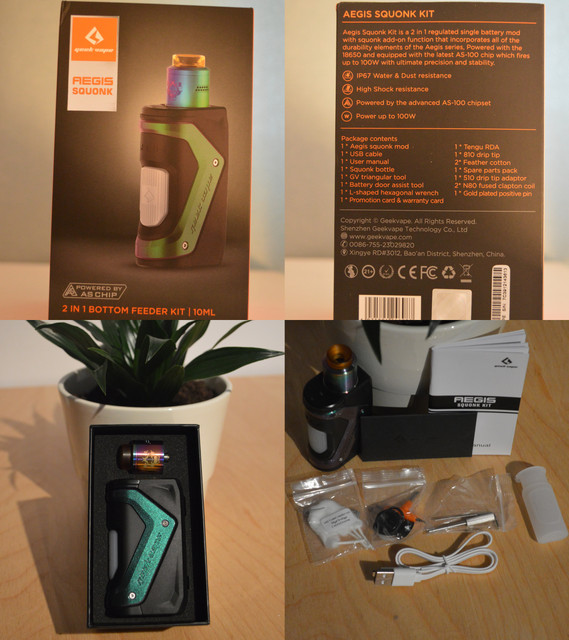 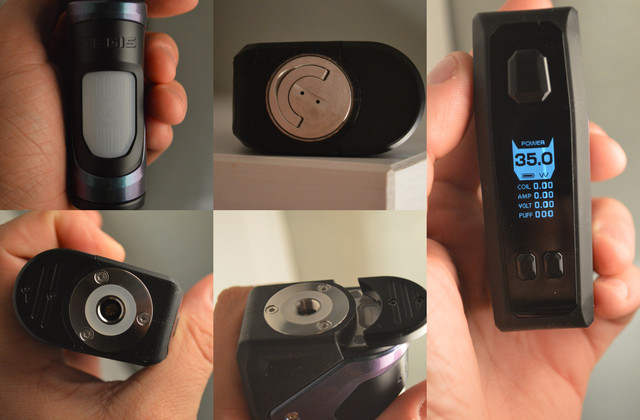 As mentioned earlier, this is my first squonker so I was a bit worried in the beginning, but actually the transition from a normal mod to this squonker was rather simple.

I loved unpacking this kit a LOT and was very happy to see that there was some prebuild coils included so I could start vaping out of the box.

The squonk mod menu is simple in operation, the standard 5 clicks on and off, 3 clicks to enter the menu, hold the fire button and up to increase screen brightness and down to decrease. Scrolling through the different modes (eg. temperature control modes & bypass) is simple by just using the up and down button. Those that used the Aegis solo will not have to learn anything new as the chipset is identical, the AS-100 chipset.

I used it in wattage mode and temperature control, it both works very well.

The fire button is comfortable and there is no rattling when moving the device right next to my ear.

Filling the squonk bottle is simple, you can slide open the panel and fill straight into the bottle. No need to take out the squonk bottle to do so, it might however be a pit more complex with larger bottles, the RDA might be in the way, in that case the RDA needs to be unscrewed before filling. The bottle itself squonks really well, it’s a bit sturdy, but it feeds the RDA very well and very equal, haven’t had issues oversquonking and getting liquid out of my airflow.

It is however quite a project to replace or clean your squonk bottle, whereas with most squonker you can open the battery door and just take out the bottle and clean/replace. The Aegis squonk mod requires you to unscrew the squonk part from the mod, then to pull out 2 rubber plugs where the next 2 screws need to be taken out for the bottle to come out. I wouldn’t call it a con because this is just the only way how geekvape could get this certified as IP67 shockproof, waterproof and dustproof.

Also, in the kit you get an allen key intended for opening the mod, while the mod actually is kept together with torx screws, it does work, but if you are not careful you might end up with a dull screwhead (Which I unfortunately had).

Something I’ve often heard was that the battery door on the Aegis solo was hard to unscrew and Geekvape therefor included a battery door tool, I on the squonk mod never really had to use it, it’s a simple and smooth experience to replace my 18650’s.

Building on the Tengu is simple, one of the leads of the coil needs to go into the golden center post and the other end to the diagonal silver post. It is however important to keep the coil rod/tool straight, because of the diagonal post it will twist your coil down a bit. It took me a minute to build the whole thing ready to vape, it came out at 0.2ohm which was what I expected it to come out using the 2x 0.4ohm 0.4ohm fused claptons.

The RDA has a deep enough juice well to not have to constantly squonk, for me squonking it once after each 3 to 4 hits was enough. The bottle also effectively sucks back the juice to make sure its not too saturated in the tank and the spit back is minimal because of that.

One problem I had in the beginning on the Tengu is that the airflow ring was kind of stuck and it didn’t want to move at all, after greasing it with some e-liquid and a couple of hours it finally started moving a bit. The airflow is placed well hitting the coils directly on the side. Closing the airflow down is something that requires patience sometimes as when moving to fast will make the whole RDA unscrew from the mod, I really must do it in slow-motion to get it closed.

I love the RDA itself, the flavor and vaper production are spot on for me, the honeycomb airflow design allows me to very precisely open or close the airflow. For me the perfect vape was around 60 watts with the airflow about half open, really enjoy it and will so for a long time.

The drip tips that come with it are not really my thing, to me they are too short a bit, especially when vaping at higher temperatures/wattage levels, it is just not comfortable having my lips on a warm metal tank. But maybe I have big lips, I don’t know Anyways I used my own longer 810 drip tip.

I think this is another great Geekvape product that makes the Aegis line more versatile. It is perfect for those that love squonkers, but need something that can resist some water and a drop here or there. Also, for those that are interested in starting to squonk this is a good starting point, I myself also used this mod as a beginner and it was a positive first time squonk experience.

The RDA is delivering great flavor and is easy to build on, just wish one of the drip tips in the kits would be slightly taller.

One thing which I think is a bummer to this kit is the project and time it takes to replace or clean the squonk bottle, do use a proper torx screwdriver and not the allen key that came in the kit, because you will like me end up with dull screwheads

Design wise its looking great (in my opinion) and it has a nice weight to it. The fact you can use it as a squonker or single battery mod by replacing the squonk part for me is a great addition, you basically own 2 mods while owning one, you just need to buy that additional replacement part which is luckily not that pricy, around 7 dollars. Love the fact I can just not worry about getting it wet or letting it drop, I tend to make my devices drop as I am not the most careful person overall.

The kit is available on the official Geekvape website for 90$.

In case you don’t need the RDA, they also sell the Squonk mod seperatly for around 70$.

If you want to keep up to date with the latest Geekvape news and releases you should follow them on Facebook - GeekVape Soon they will release a new kit that will be part of the Aegis Family !

Hope you liked my review and to finish in style here is a song for you by Bob Marley called ‘Easy Skanking’, but let’s replace skanking by squonking !

Nice review. I did one on this unit also. I felt like a single coil rda would have been a better fit but that's just because of my vaping style.
•••