Guide to Choosing a Battery Charger

Guide to Choosing a Battery Charger​
Choosing the right Li-ion charger for your batteries can be as confusing as choosing the right batteries for your mods. It's my objective to help you become aware of the different features available so that you can make a better, more informed, choice. If you know nothing about chargers, hopefully by the time you read this you will have a good idea of what features you need in a charger.


THE "BEST CHARGER"
People often ask, "What's the best charger?" And most people will answer by naming one of the more expensive chargers with all the "bells and whistles". However, that charger may not necessarily be the right or best charger for YOU. For example, you may not need a fancy display screen or a fast charger. A budget charger manufactured by one of the preferred brands may be a better choice for you.

I went all out when I purchased my first Li-Ion charger. I went with the Pila, widely considered to be the best charger four years ago. It was the most expensive charger, only had two bays, and didn't have a LCD screen ... just LED lights. I have no regrets as it performed admirably for nearly two years under heavy use. One of the charging bays eventually stopped working, so I was then in the market for a new charger.

My third charger was the Nitecore Intellicharger i4. It is a basic budget charger which suited my needs well.

My current charger is the Xtar VP4. I wanted a charger which was more of a high end charger and had a nice LCD that provided real time information about my batteries. The screen is quite nice. It charges my batteries noticably faster than the Nitecore i4.

The below video shows you an efficient way to shop and compare chargers:


RECOMMENDED BRANDS
Except for a couple of exceptions, I recommend buying an Xtar, Nitecore, or Efest LUC charger. Just like recommended battery brands (Lg, Samsung, Sony), these three manufacturers have earned excellent reputations for producing qualtiy reliable chargers. The best batteries deserve a good charger. Should you buy a cheap generic or offbrand charger, you're probably taking a gamble that the manufacturer did not cut any corners to lower his production costs.

INDEPENDENT CHARGING BAYS, OR NOT?
True independent charging bays will offer faster charge times for each battery being charged simultaneously. The individual charging bays will not be sharing a circuit, which can slow charging times. Independent bays adds more electrical components, and therefore add to the overall cost of the charger. In this case, you get what you are paying for. Not everyone needs a fast charger however. Desirable yes, a necessity no. Chargers without independent bays will still charge batteries in a decent amount of time.

Many companies advertise fully independent charging bays, but it's my guess that the vast majority of multiple bay chargers are not. What generally happens, once four bays are filled with batteries, two of the four bays will share a circuit. For instance, my Xtar VP4 claims independent charging bays. It will charge two 18650 at 1 amp, but if I charge four 18650 the charger takes over and charges all four batteries at 0.5 amp.

Probably the only chargers which may be truly fully independent are the top of the line expensive chargers.

I will say that if you use a mechanical mod, and don't have a voltage tester or multimeter to measure your battery's voltage, using a charger that has a digital readout of the battery voltage is very worthwhile.

​
This is a controversial subject. Those who use them say that the flame ......ant bag will contain a fire caused by either the battery or charger. Those who don't use them say they may actually create a problem where none existed. Charging bags were designed to be used with Li-Po batteries and chargers. Li-Po batteries are used in the remote control car and plane hobby. These batteries are not a safer-chemistry battery, and a "battery incident" with one can be quite spectacular if you are into fireworks and flames.

This is another controversial subject. In doing my research, I found it difficult to find a standard definition of what a "smart" charger actually is. Manufacturers like saying that the chargers in their lineup are all smart, but don't actually say what that means. So buyer beware:​
A WORD OR TWO ABOUT "TRICKLE CHARGING"
Once a battery receives a full charge (4.2 volts), it will naturally start to slowly lose some of that charge, even when not in use. Manufacturers want their customers to be happy with fully charged batteries when they need them, so they design algorhythms which keeps the battery's charge "topped off" while sitting in the charger waiting to be used. Sounds like a great idea, but its not so great for the battery's health.

Trickle charging leaves a battery in a highly excitable and vulnerable state. This is why we tell people to remove their batteries from the charger as soon as they are fully charged, to not leave batteries in a charger overnight while sleeping, and to "rest" batteries before putting them in a mod.


"Rest batteries after charging--
One commonly-reported factor in almost all the incidents we hear of where batteries failed violently while in use is that they were taken directly off the charger and then used immediately, at which point they failed.

Because of this, we think it may be a good idea to rest batteries after charging them. This advice will not be found in the usual 'reference bibles' on batteries, but we see more and different reports than others. Therefore we now advise:

Do not use batteries directly after charging them. Use a battery or batteries you previously charged, and that have rested for several hours. This is especially important if using a stacked pair for higher voltage, as statistically the risk is far higher." --Rolygate​
The benefit to resting is increased battery lifespan & minimize the chance of venting.

E-Cigarette Explosions: Comprehensive List
There have been 50 major incidents this year alone and that's just the ones which make the news. They also go on to say...
"It is interesting to note that the nature of e-cigarette explosions has changed over the years. The FEMA document cited above suggests that approximately 80 percent of e-cigarette explosions happen during charging.

How Chargers Charge Your Batteries​
Lithium-ion batteries are charged to 4.2v per cell, higher voltages could increase capacity, but reduce service life. And lower ones can increase battery charge cycles at the cost of less run time.

Li-ion batteries do not need to be fully charged, nor is it desirable to do so. In fact, it is better not to fully charge, because high voltages stresses the battery. Choosing a lower voltage threshold, or eliminating the saturation charge altogether, prolongs battery life but this reduces the runtime. Since the consumer market promotes maximum runtime, nearly all chargers go for maximum capacity rather than extended service life.​
Here are some charging tips from Battery Mooch:

Originally, my intent was to show pics, prices, and features for each individual charger. However, upon doing some additional research I found that there are way too many quality chargers on the market from the recommended manufacturers to make this task feasable. Just set your priorities on the features you most need and set your budget, and then do your homework to find which chargers meet your requirements and price range. If you're not sure about a particular feature or have questions, contact the vendor for an explanation. I always use RTD Vapor when I need either batteries or a new charger.
Recommended vendors: 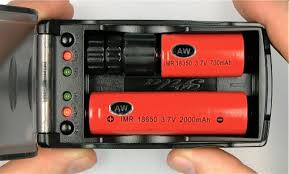 At one time widely considered to be the top charger on the market. However, this model has not had any upgrades in the last few years to allow it to remain competitive with the other high end chargers that have display screens. A fast "smart" charger with two independent charging bays. Pila includes spacers for charging 18350 and 16340 size batteries. If you have weak or disabled hands, this is probably the best choice for you, as the spacers used make inserting/removing batteries easier than the sometimes stiff spring-loaded sliding bars seen in most battery chargers.​
OPUS BT-C3100 V2.2 ($48.99)

● LED back light displays charging / discharging / quick test / circuit more clearly in the dark
● New refresh mode can show you batteries capacity
● The charging current can be selected to be 200mA, 300mA, 500mA, 700mA or 1000mA ( 1500mA and 2000mA can only be applied when only slot 1 or 4 is selected ). Default discharging current is 500mA
● It provides four independent charging slots for rechargeable batteries. The charger can charge batteries of different types and sizes and with different capacities at the same time
● The charger integrates the minus delta voltage ( - ΔV ) for NiCd or NiMh battery charging termination, and for Li-ion batteries charging to 4.2V with pre-selected constant current. ( 3.7 Li-FeO4 and 4.35 type high voltage batteries charging mode can be selected through switch on board )
● The charger also includes overheat detection to protect rechargeable batteries and charger itself from overheating
● New added quick test mode to test the battery impedance
● Four Working Modes available at user's choice: Charge, Discharge, Test, Quick Test and Refresh
● Easy to read LCD with back light Showing Battery Voltage, Charge / Discharge Current, Charging Time, Battery Capacity etc.
● Designed for AA ( LR6 ) and AAA ( LR3 ）NiCd, NiMH or 3.7V Li-ion/IMR rechargeable batteries in size type of 10440, 14500, 16340 ,17500, 17670, 18350, 18490/18500, 18650​
Xtar VP1 ($24.90)

The Xtar VC2 charger is the World's first lithium-ion battery charger that features an innovative tachometer-style LCD display screen. This charger will tell you the real power of your battery. The VC2 will display the batteries mAh capacity assuming it is completely drained before charging. Like all of our chargers, it can intelligently identify input power and automatically adjust the the most suitable charge current (0.15A~0.5). It is compatible with both IMR lithium batteries and small capacity batteries. Both channels are independent and it can also tell you if you have bad batteries. And like all XTAR chargers, the VC2 features overcharge protection, over-discharge, short-circuit, and reverse polarity protection. Adopted from the VP2 charger, the VC2 can revive overly discharged batteries as well.

What everyone should know about Battery Chargers, Battery University
Mooch's Blog
Li-Ion Battery Charging
FDA identifies 92 events of overheating/fires/explosions from 2009 to 2015