I probably know what you’re thinking. Oh boy, another Drag mod. Well, yes it carries the Drag name but it’s different from previous models that I’ve reviewed before. I’m probably getting ahead of myself here. First let me say that I was sent the Voopoo Drag Q Pod Mod by Voopoo for the purpose of this review. I hope that it helps you decide if it’s something you’d like to purchase yourself or not. The Q has a 1250mah internal battery which is a nice size for a device of this small size. It makes use of a synchronous airflow and power adjustment which I found rather interesting. The ITO-X Pod included in the kit has a 3.5ml liquid capacity and includes two coils of different resistance levels than I’m used to seeing. Instead of the usual .8 and 1.0 this kit comes with .5 and 1.2 ohm coils to allow a wider variation of output and performance. 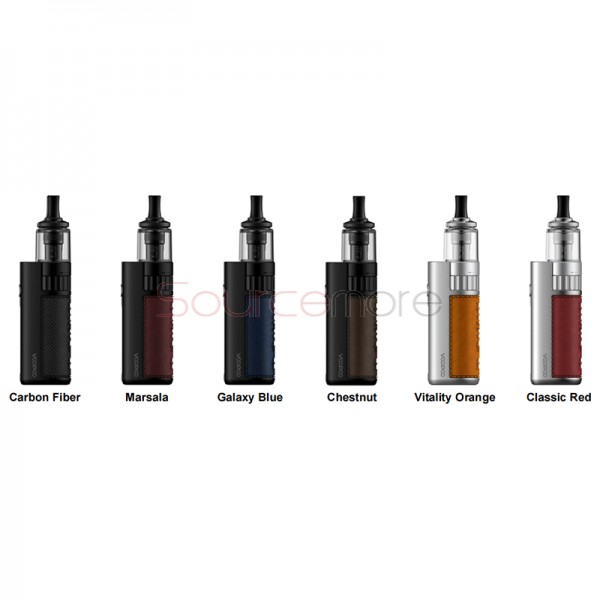 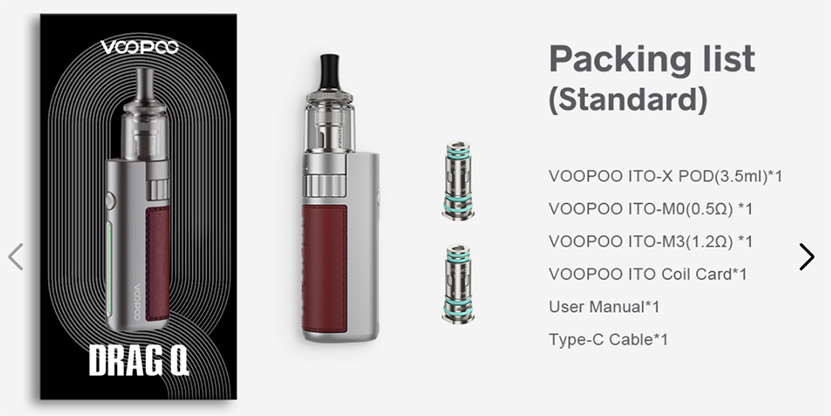 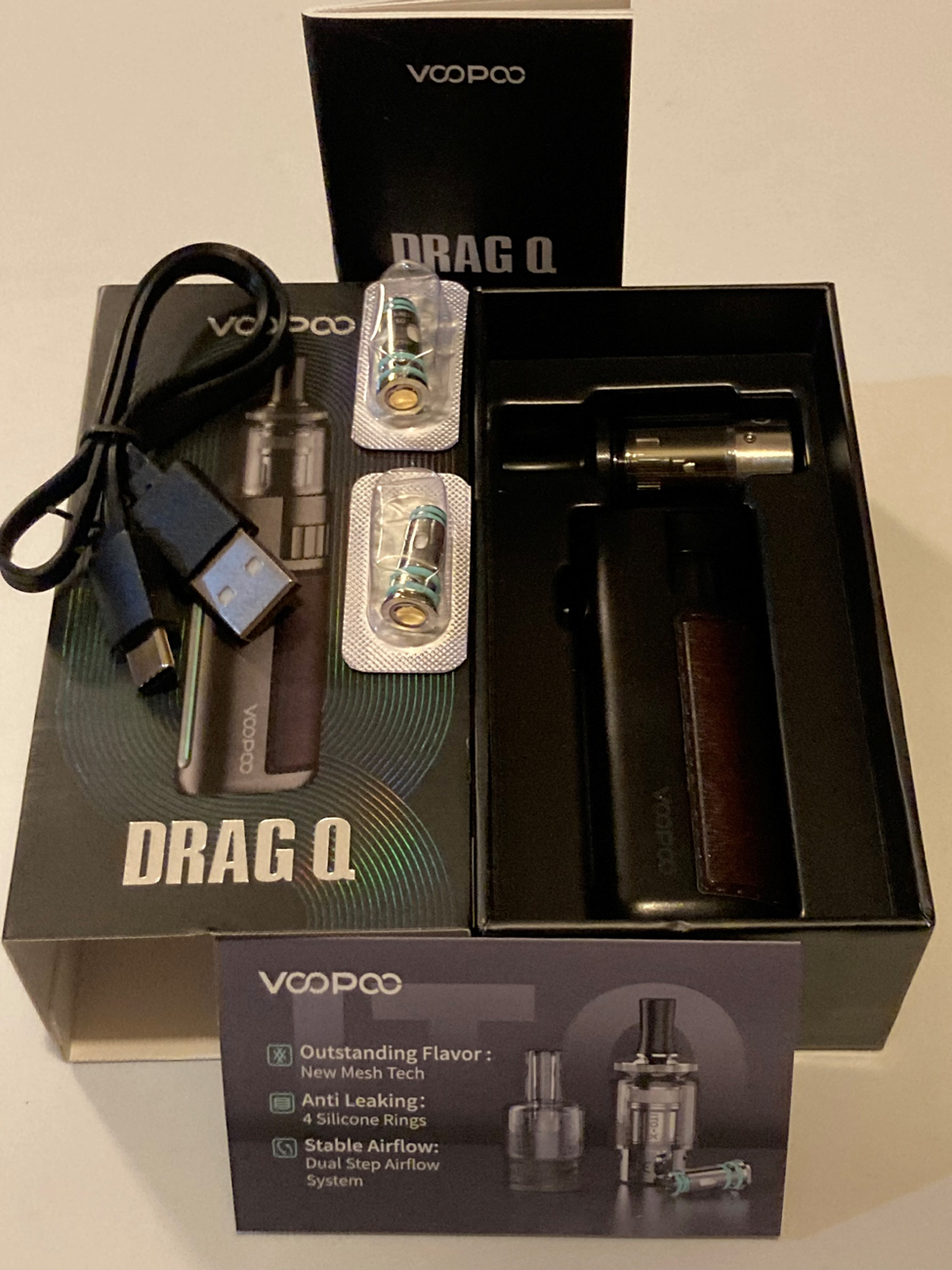 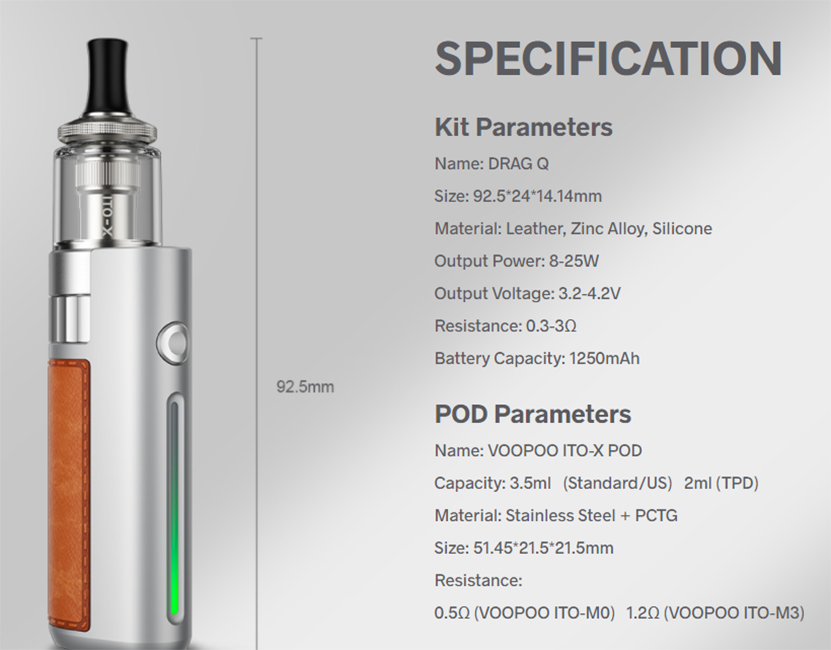 1. Synchronous adjustment of airflow and power

10. Automatically locks after 5 minutes of inactivity 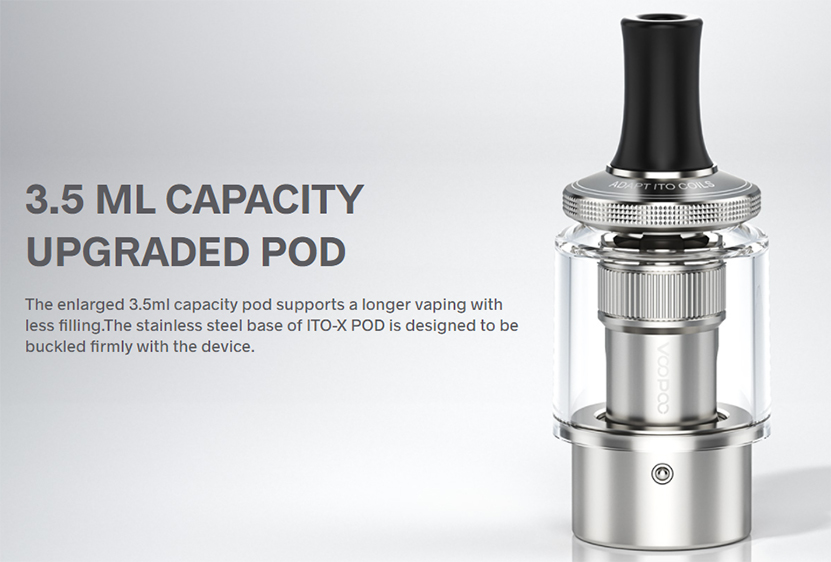 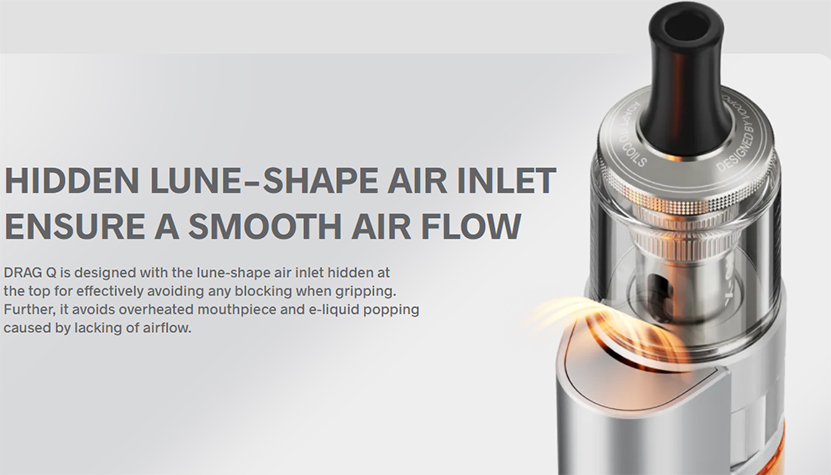 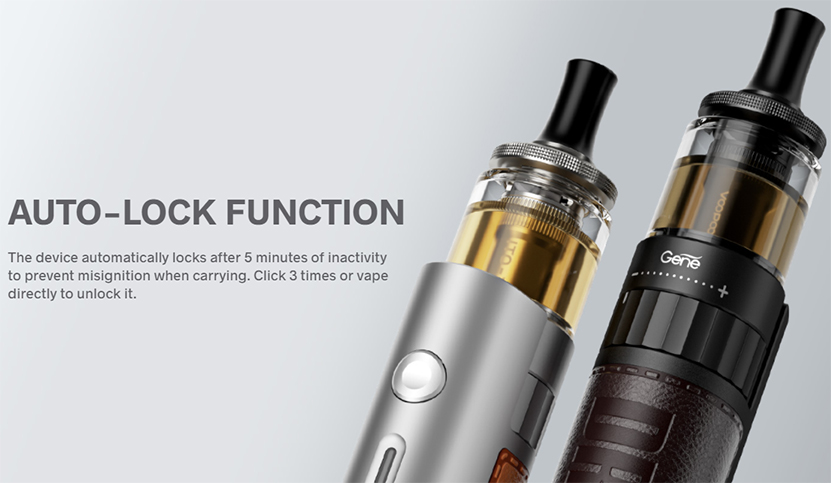 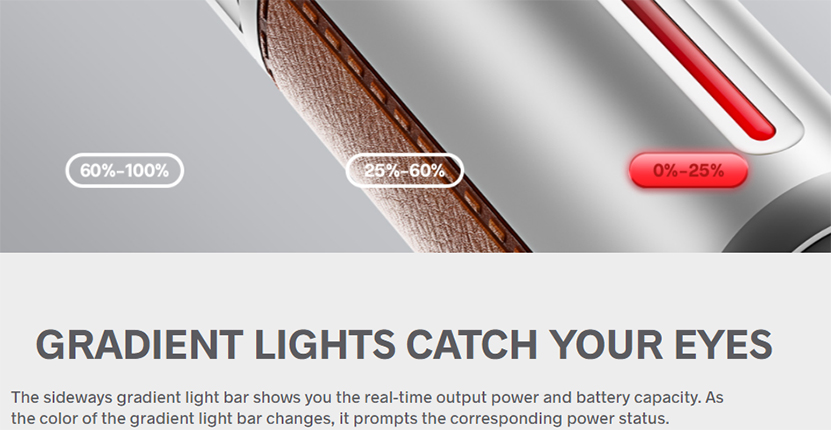 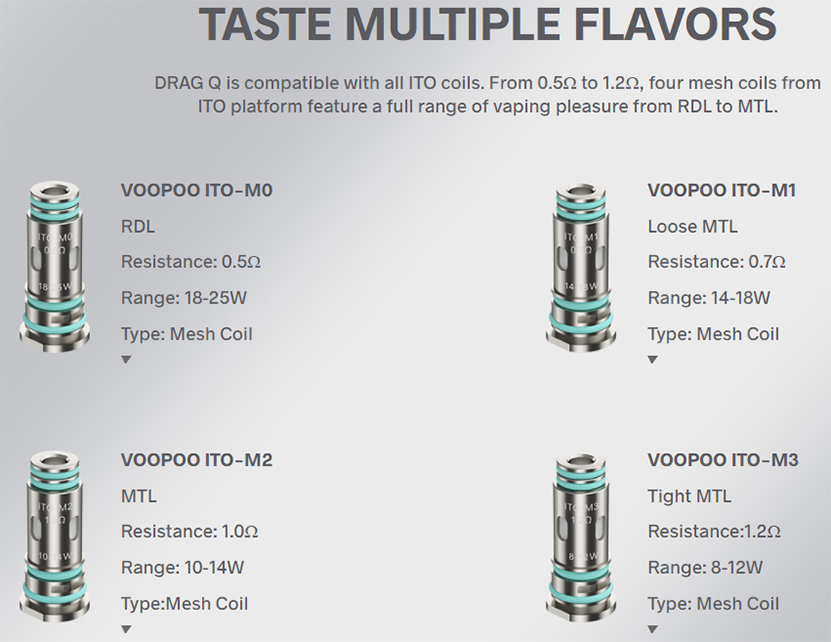 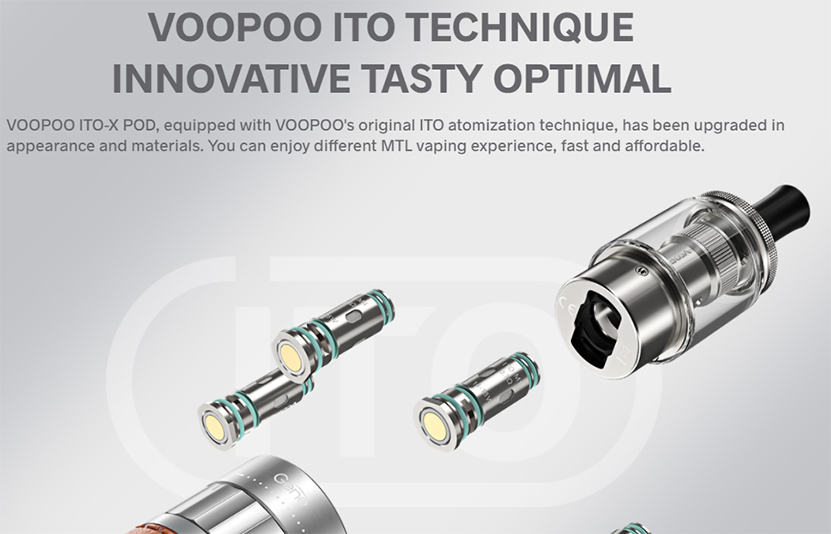 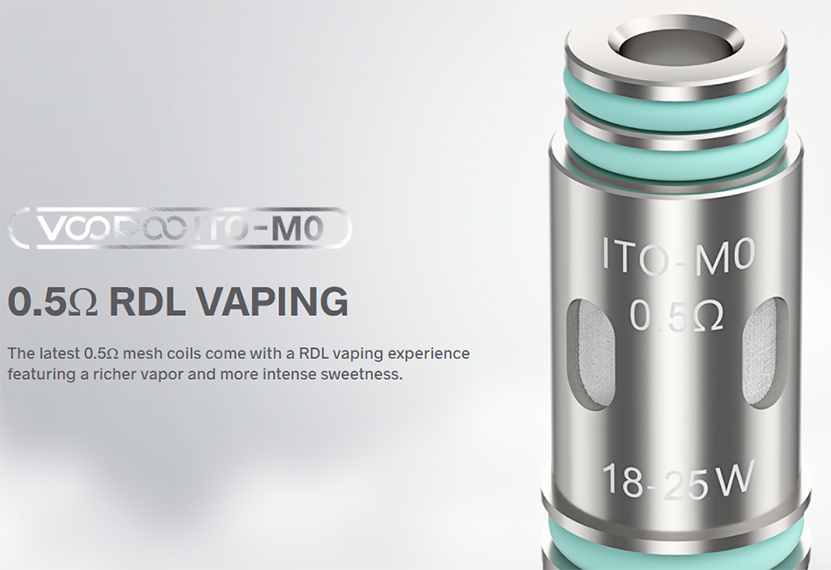 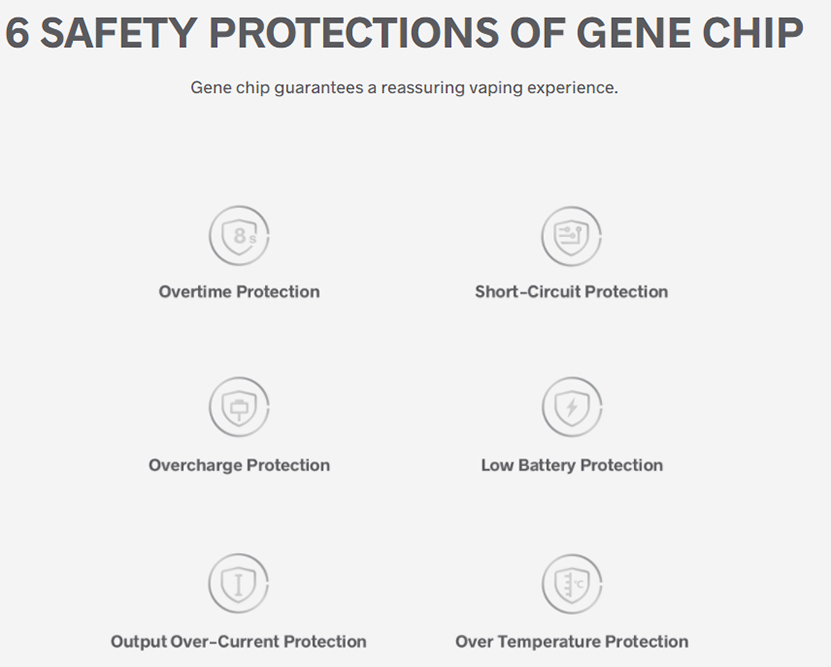 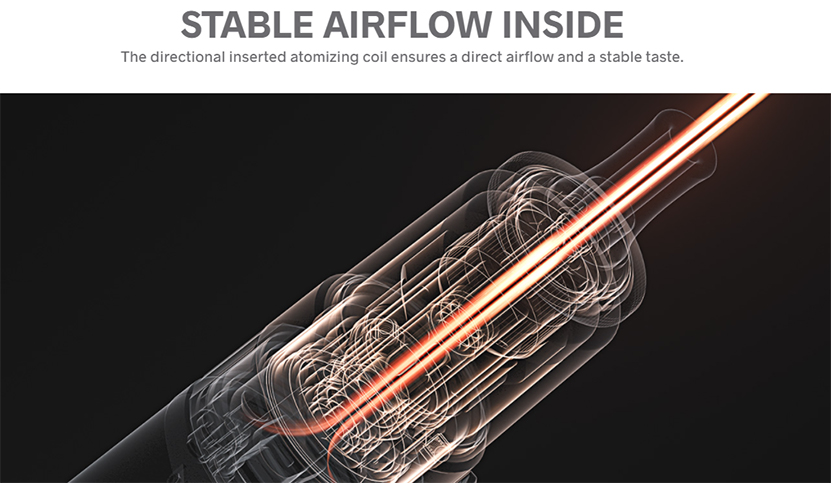 The packaging for the Drag Q was a little different from what I usually see. There is a pull tab on one end and the contents slide out instead of having the usual outer sleeve and box top to remove. The front of the box has a nice color picture of the device inside along with an almost rainbow type swirl around the device picture. On the back of the package is the usual list of contents, company information, and authenticity code. Of course mine has a big Sample sticker on the back since it is a reviewer’s sample and not a final production model.

On one side of the box is a series of QR codes that can be scanned with your phone along with a barcode and the name of the color of the device inside. As you can see I received the Chestnut color which I like very much. On the opposite side is a list of features and yet another QR code.

At the time that this is being written, the Drag Q has not been released yet and there is little to no information available on it. I will do my best to cover it the best that I can with the information I have. 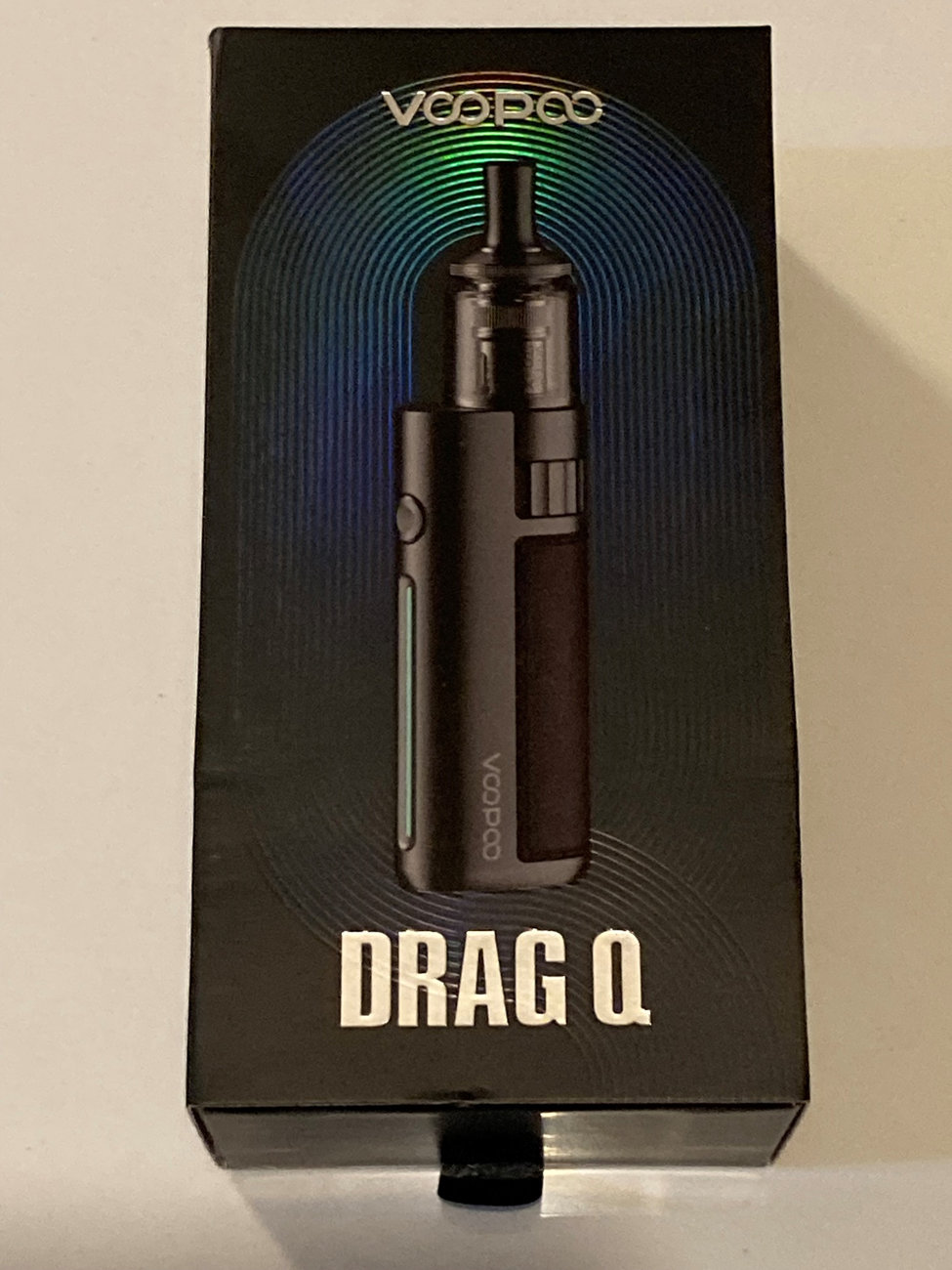 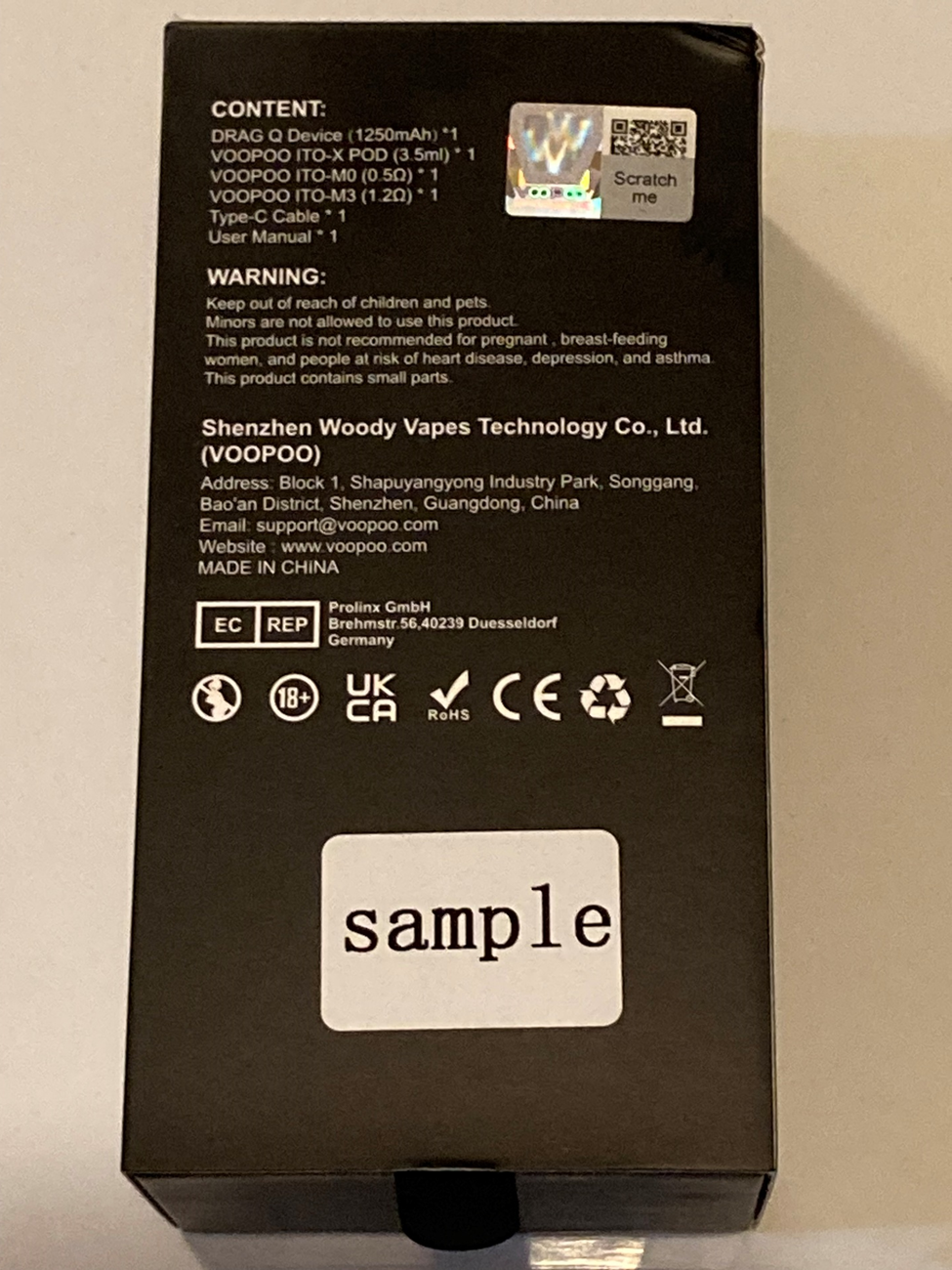 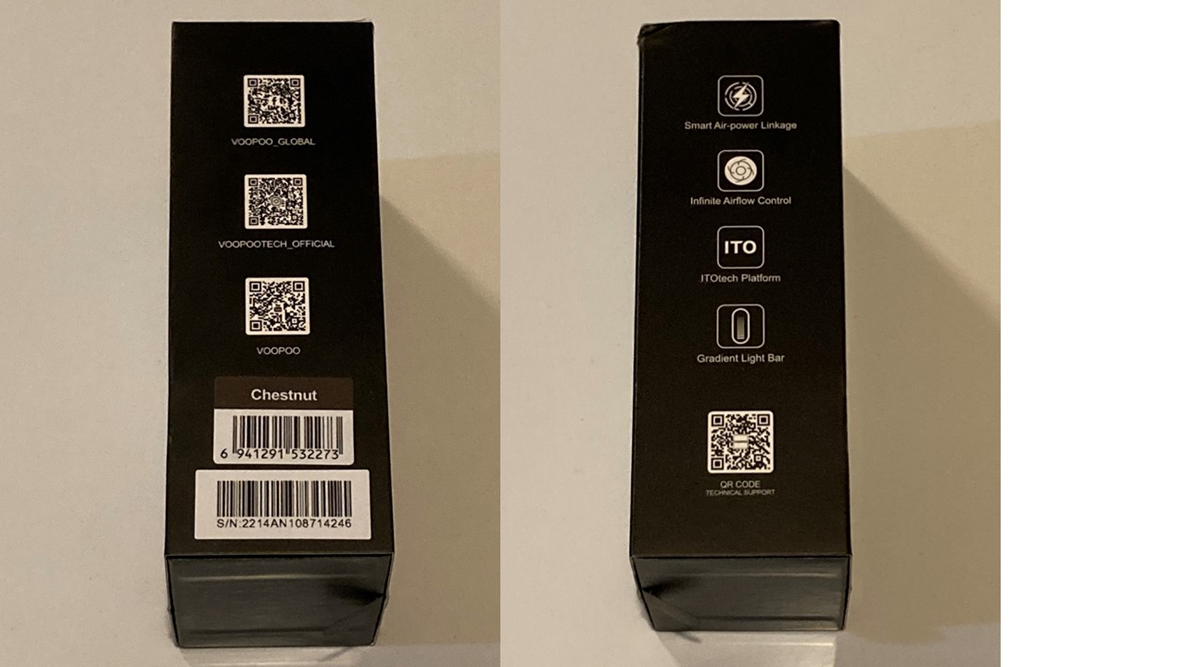 Let’s start by taking a look at the ITO-X Pod included in the kit. I have to say that I really like this one. The first thing that stood out to me was the screw off top cap for filling. This is a definite plus for me on any pod device. Top fill is always my first choice if given one.

After the cap is removed there are two holes. One for filling and one for venting while filling. The holes don’t look big enough to fit a bottle tip but I was able to use a plastic 50ml bottle to fill the pod. Trust me, you don’t want to insert the bottle tip and give it a hard squeeze. Liquid will shoot out the opposite hole. I did this and had to clean the outside of the tank and wash my hands. Slow constant squeezing works best when filling. I noticed in the instructions that it said to fill the pod 2/3 full. I did initially on the first fill but after that filled it more and never had any leaking.

In the second picture below you can see that the drip tip is not a standard tip. It slides over the short stub on the top cap. It really didn’t bother me since the tip included was comfortable to use but some may not like that they can’t use their favorite tip.

I thought it was a nice idea that Voopoo put not only their name on the top cap but also put Adapt ITO coils on the cap. The coils are a push in type and you can see that there is a flat spot on the bottom of the pod. There is also a flat on each side of the bottom of the coils that you have to align with the flats on the pod when pushing them in or they will not seat properly and will leak. The kit I received came with a .5 ohm coil and a 1.2 ohm coil. The .5 coil inserted easily but I struggled a little with the 1.2 coil trying to get it inserted properly.

I almost forgot to mention that on either side of the pod is a small detent ball that helps to securely lock the pod into the mod opening. It is a very secure connection and will never come out accidentally. It takes a bit of effort to pull the pod out. 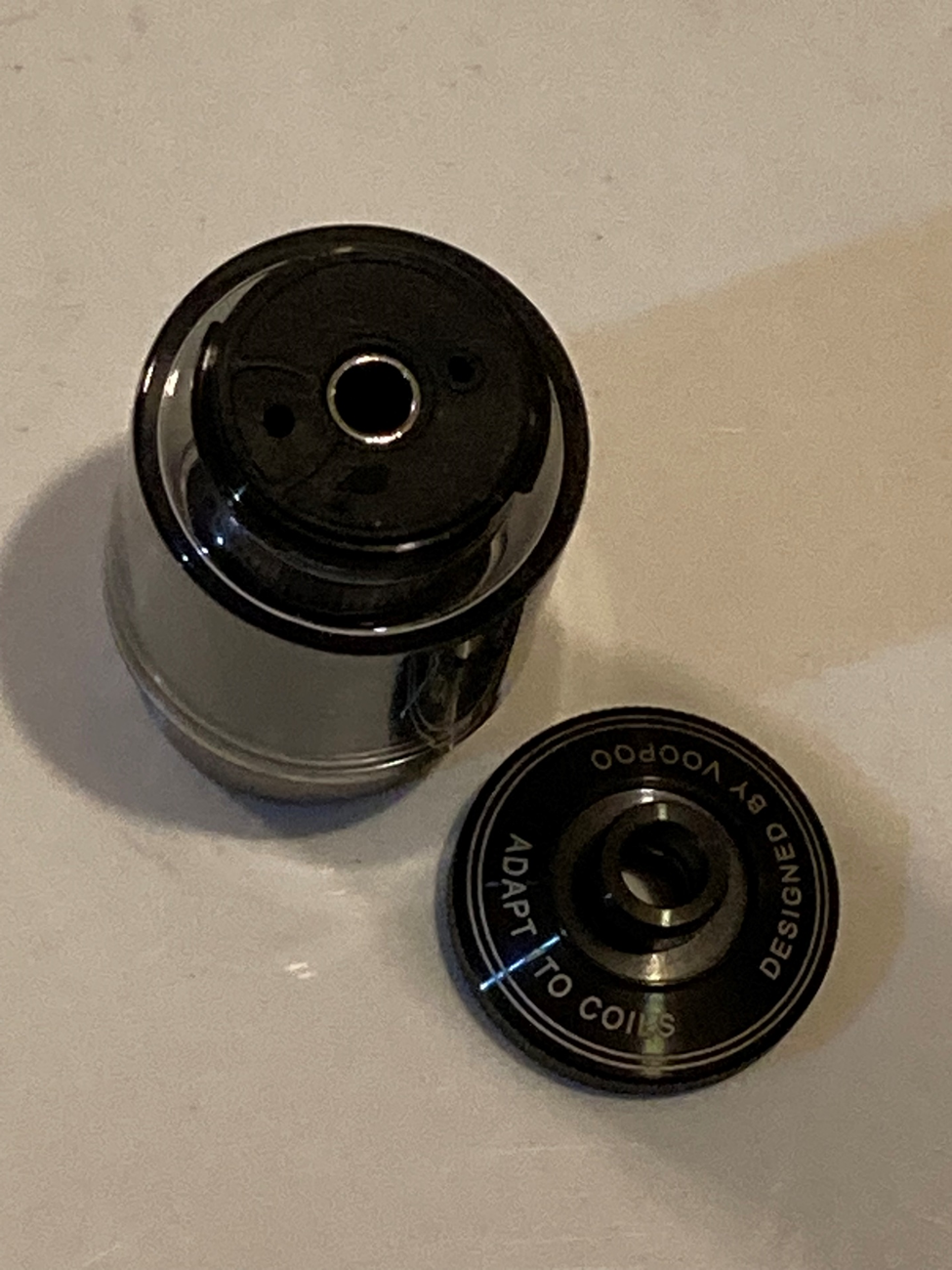 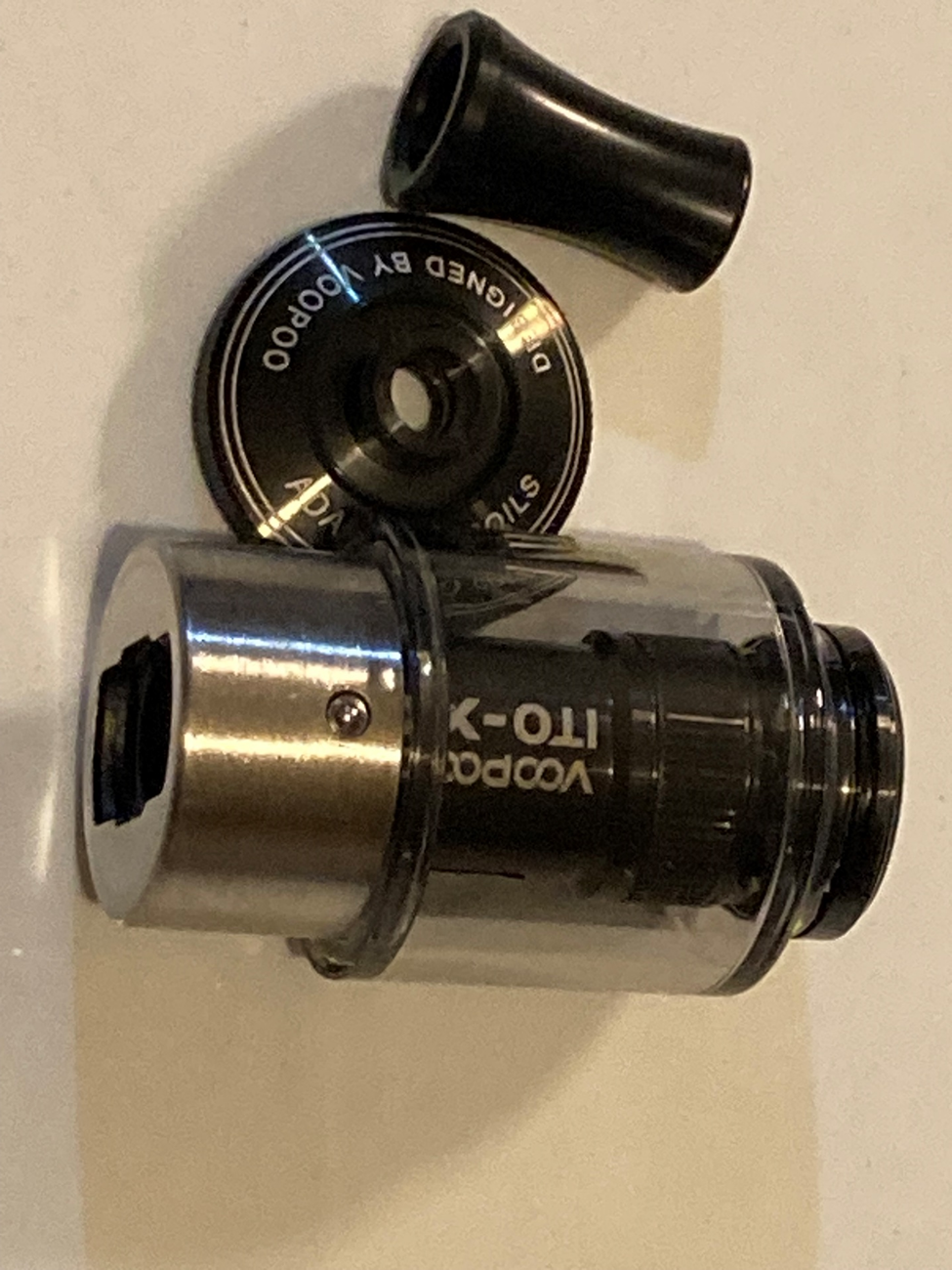 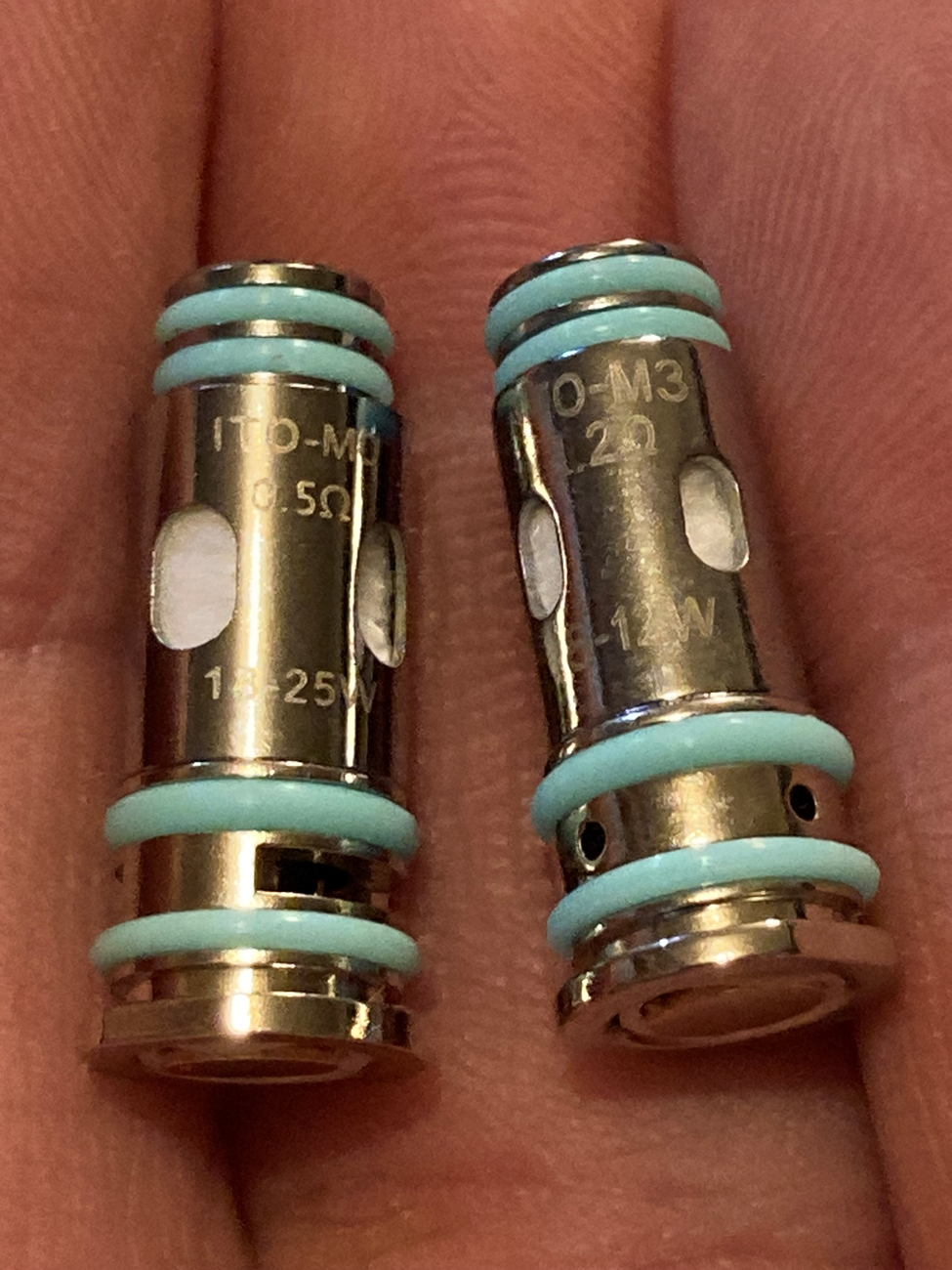 Now let’s take a look at the mod itself. To me it’s a rather ingenious design. The mod has a 1250mah internal battery which allowed me to use it through 3-4 fills of the pod before needing to charge it.

The back side of the mod is wrapped in a padded leather and in my opinion looks really nice with the DRAG Q name stamped into it. Near the top of the back side is the Gene name and below that is the airflow/ power adjuster. Yes, this one turn wheel controls both. The mod is marked with a + and – above the adjuster. If you put your ear close to it while turning you can actually hear a slight series of clicks as you turn it. To me this can be helpful in telling where you have it set. It’s a little hard to see unless you have plenty of lighting but there is an indicator mark on the turn wheel itself also. A really cool idea in my opinion. The actual airflow opening is inside the pod opening of the mod along with the two spring loaded contacts. The USB-C charging port is located on the bottom of this one so you won’t be standing it up to charge which is never really a big deal to me. 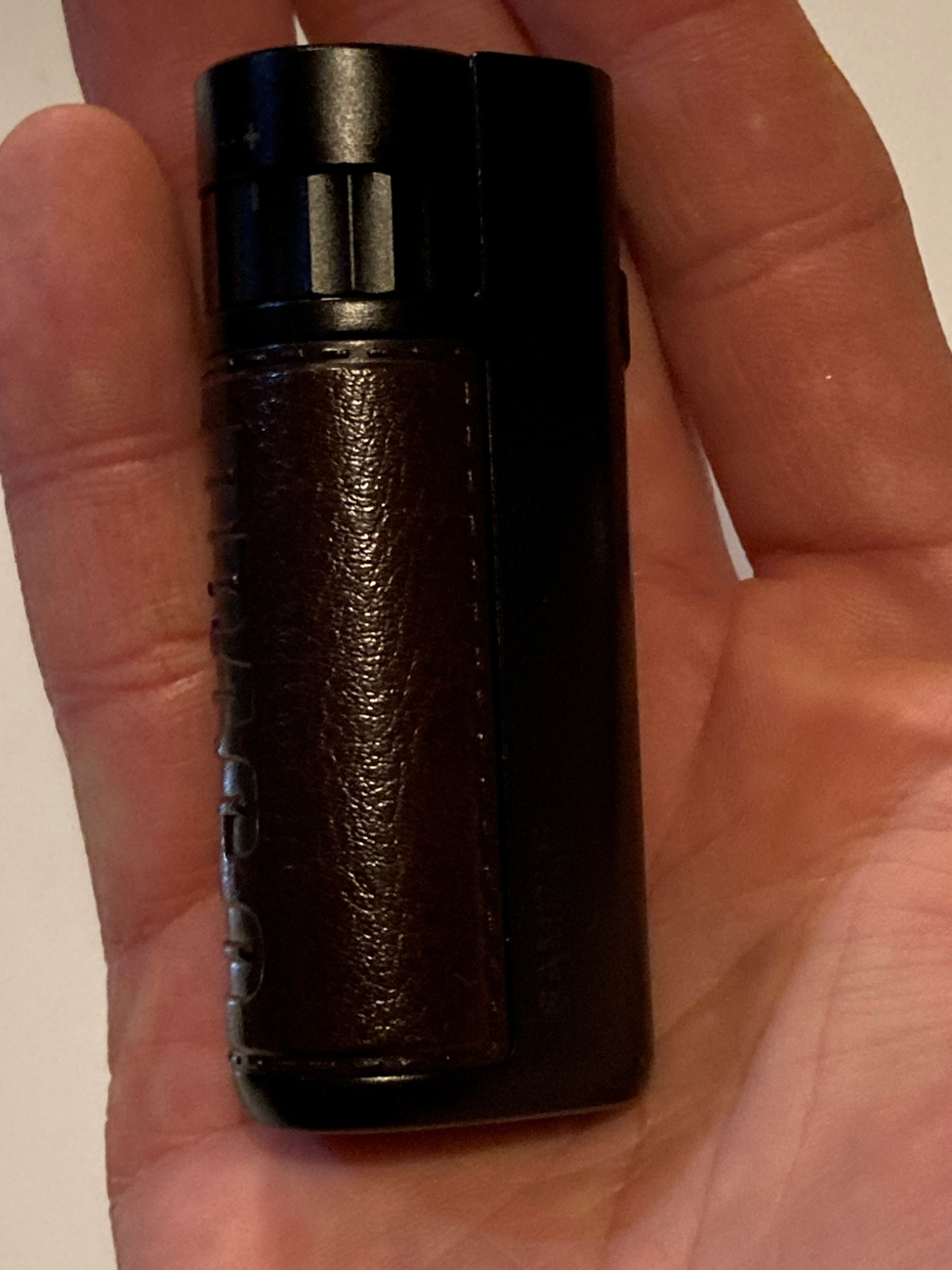 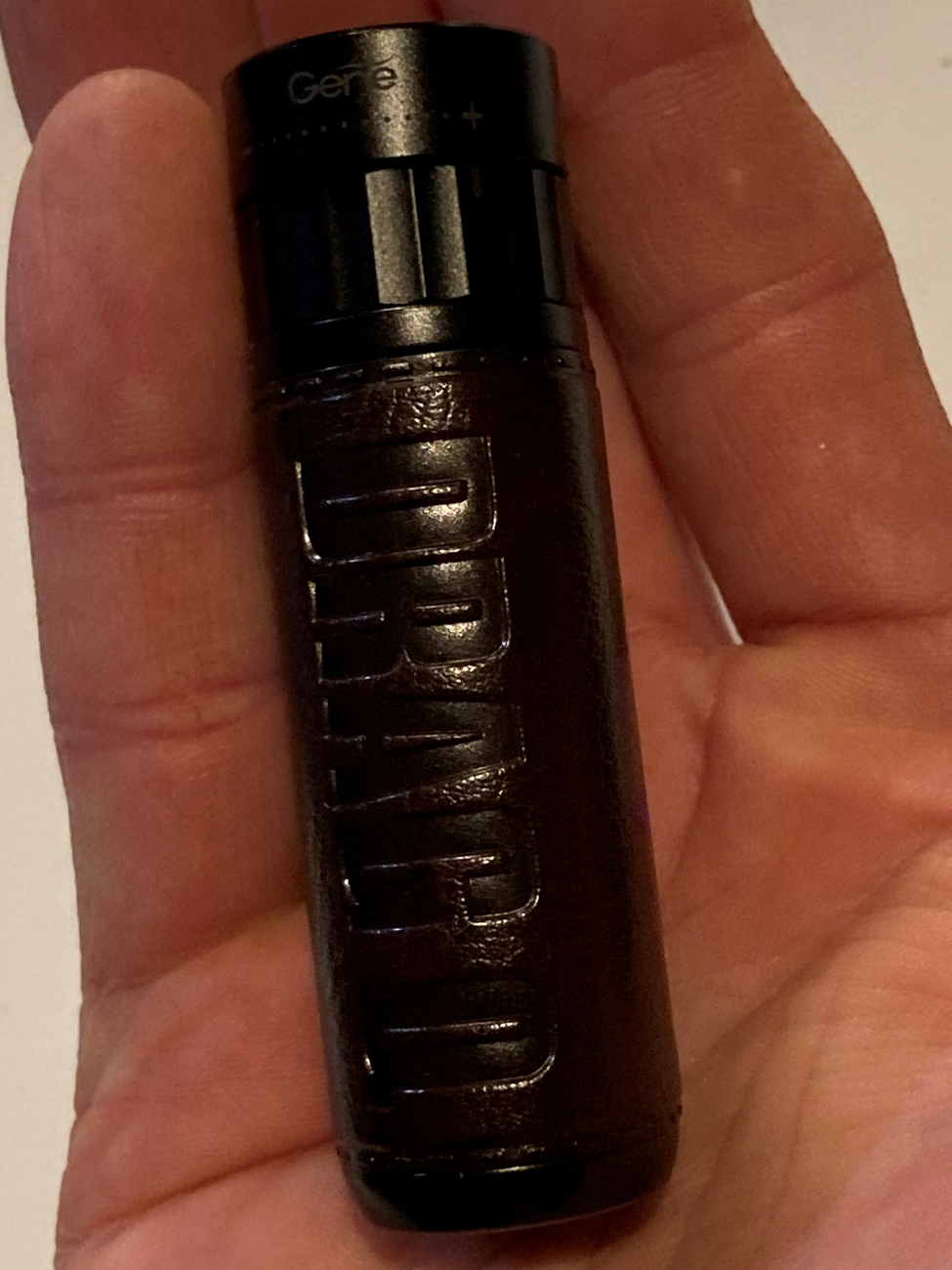 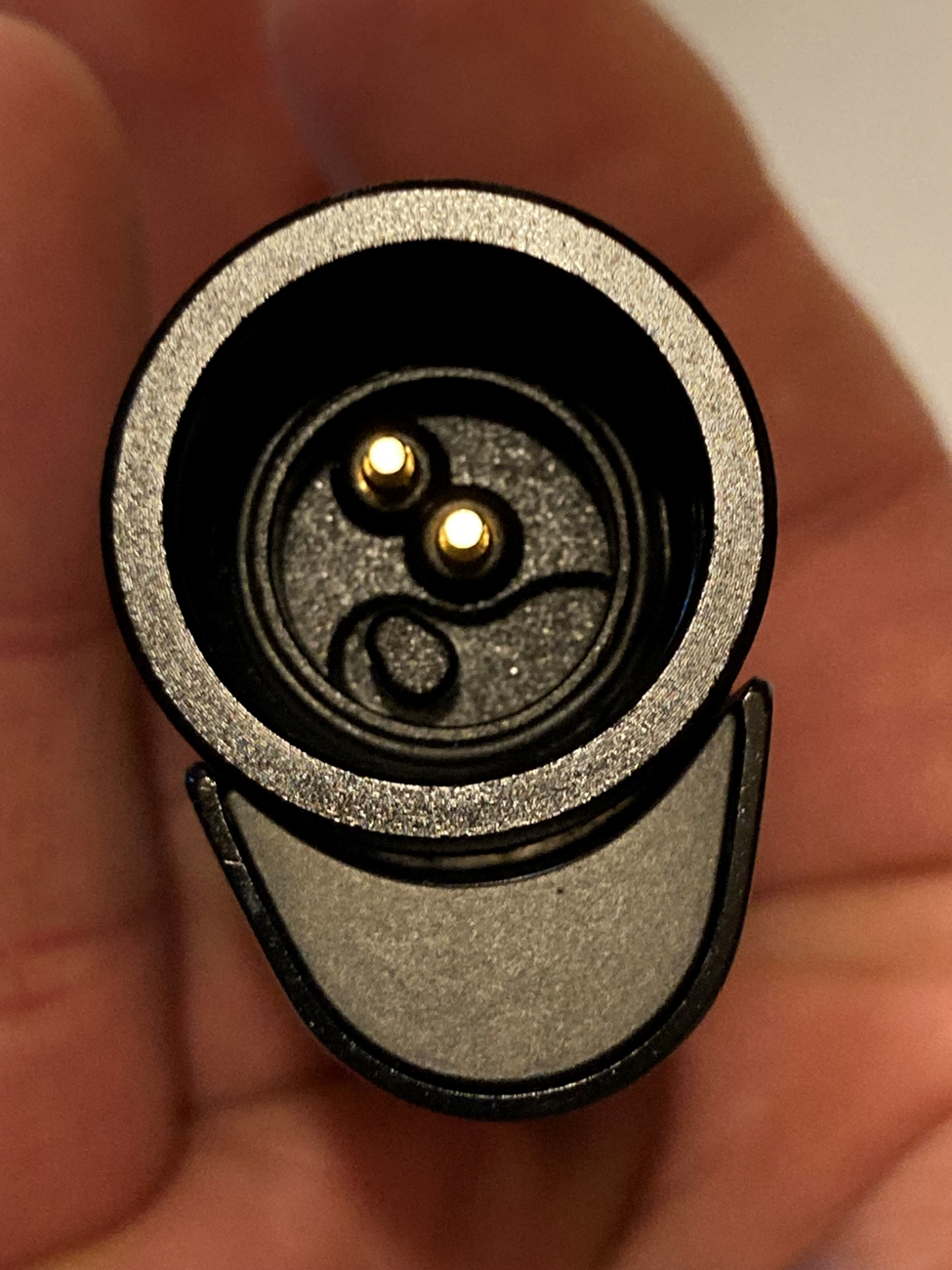 On what I will call the face of the mod is a long LED light bar which illuminates when you press the button to fire or auto draw. Without activating the output you can turn the adjustment and watch as the LED light bar illuminates more or less to indicate the output level.

Like I mentioned, the mod can be fired by pressing the button or just using the auto draw. After a period of time of not using the fire button, it will become inactive and only auto draw will work. However, to use the fire button again simply press the button once to wake it up and the second press will activate the output. The LED light bar also indicates the battery level as follows.

The operation of the Drag Q is as follows. 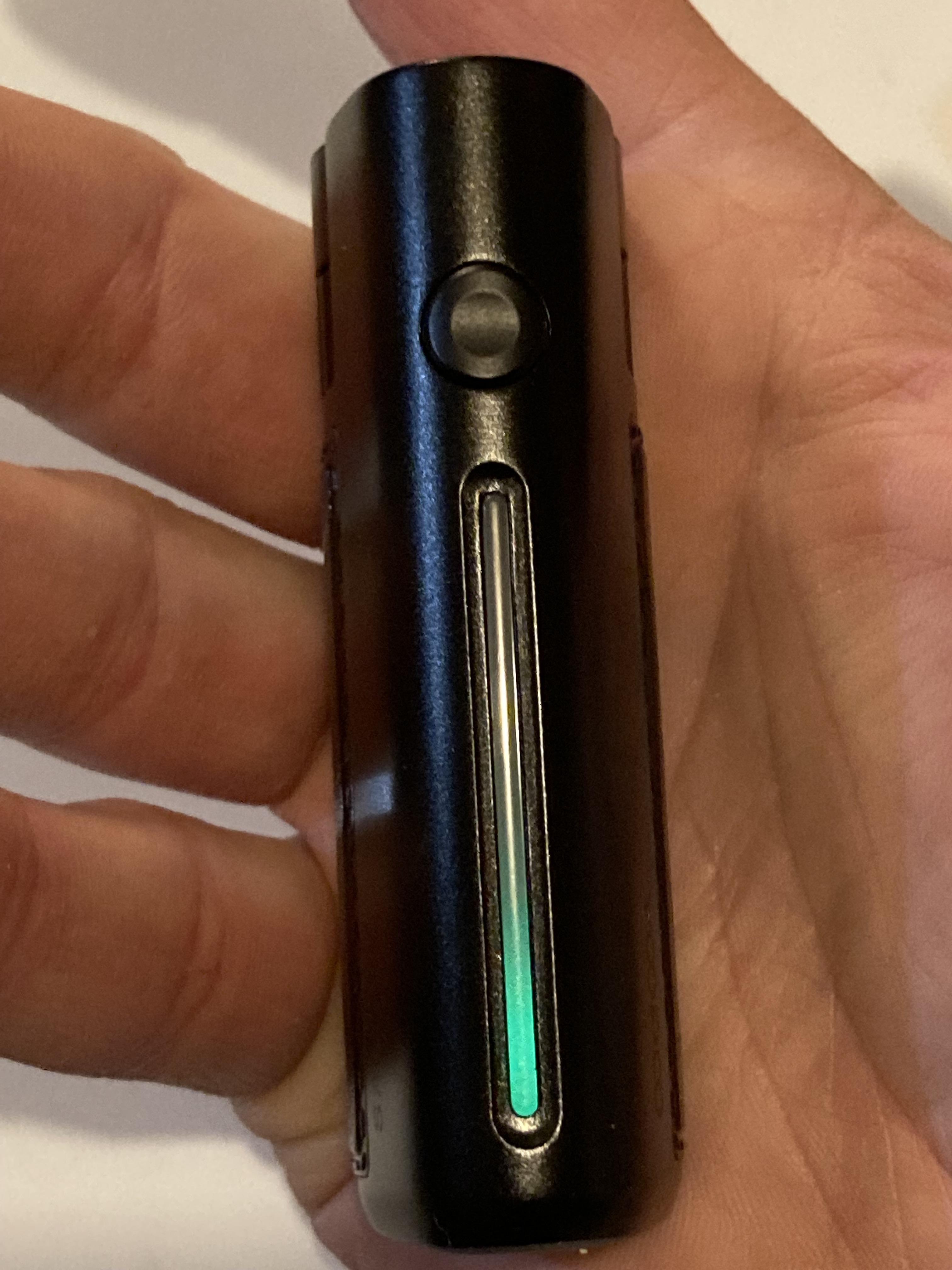 In my opinion, Voopoo has done a really nice job with the Drag Q. A few of their auto draw devices I’ve tested in the past had to have the airflow choked down almost all the way to get the auto to work. This one worked much better.

I really like how compact the Drag Q is for a 1250mah device. The light bar and the airflow/ output adjuster is a really well designed and executed idea. I don’t miss having a display screen with being able to see not only where the adjuster wheel is with the indication mark on the wheel and the markings on the mod but you also get the visual confirmation with the LED light bar. I felt like I got very good battery life from the Q using both of the coils. You might be thinking that I don't have any cons or issues with this device. There’s always something. I ran the .5 ohm coil for about a week and at that point I felt like it wasn’t really wicking properly with my 70vg/30pg liquid that I mix myself. Initially the .5 coil was great. Good flavor and it was a good fit for my style of vaping.

After that I switched to the 1.2 ohm coil. It was not a great experience from the beginning. For some unknown reason I had difficulty getting the coil to seat properly into the pod tank. I did finally get it installed. Just like with the .5 coil, I filled the pod and let it sit for about an hour while I did other things. From the start the flavor seemed a little weak compared to the .5 coil and didn’t feel like it was wicking properly with the same liquid I had used with the first coil. Over a period of a few days it just didn’t seem to get much better. I have to think that I got a defective coil. I couldn’t say that for sure since there were no extra coils sent with the kit.

Overall I did enjoy testing the Voopoo Drag Q and would like to try it again with a different 1.2 ohm coil. I really liked the .5 ohm coil the best and if I was going to purchase more coils then that would be the ones I would get. I feel like it may have performed better with a liquid with a lower VG percentage but I mix all of my liquids 70vg/30pg and that’s what I use to test review samples. So, would I recommend the Voopoo Drag Q to you? I think I would. For such a small compact device the battery lasts a long time and the flavor was good with the .5 coil and it produces plenty of vapor.

I’d like to thank Voopoo and Alice for sending the Voopoo Drag Q kit for this review. As always, a big thank you to the readers. There’s a link below if you’d like to take a look at the Voopoo website and their wide array of devices.

You might like it since you can do an airy mtl. However it would require buying the new ITO coils.
Reactions: FranC
•••

That’s the catch. I’m not going for any more.
Reactions: hittman
•••

Nice review for a nice device

Another good review. Seems as if new devices are coming out constantly.
Reactions: hittman
•••

dennism said:
Another good review. Seems as if new devices are coming out constantly.
Click to expand...

Yes there are new devices coming out every day it seems. At least Voopoo tried to do something different instead of just pumping out another small fixed output pod.
Reactions: FranC and dennism
•••

This actually seems significantly different than other products they have offered or even other products that are on offer from other companies. It looks like they actually did things a little differently made some actual changes perhaps even innovations in creating this pod product. It's pretty neat
Reactions: FranC and hittman
•••

AvaOrchid said:
This actually seems significantly different than other products they have offered or even other products that are on offer from other companies. It looks like they actually did things a little differently made some actual changes perhaps even innovations in creating this pod product. It's pretty neat
Click to expand...

Yes it is quite different. Kudos to them for designing something different.
Reactions: AvaOrchid
•••
Show hidden low quality content