Looks like a new temperature control mod enters the ring. There isn't much info to go on yet such as price, chip set and other details just a pic and some specs. Looks like we will soon see joyetech release their TC mod with 5000 MAH and a 60 watt limit with 8.0 volts. It looks to be a small form factor and some interesting color choices. If anybody has more details that would be helpful. 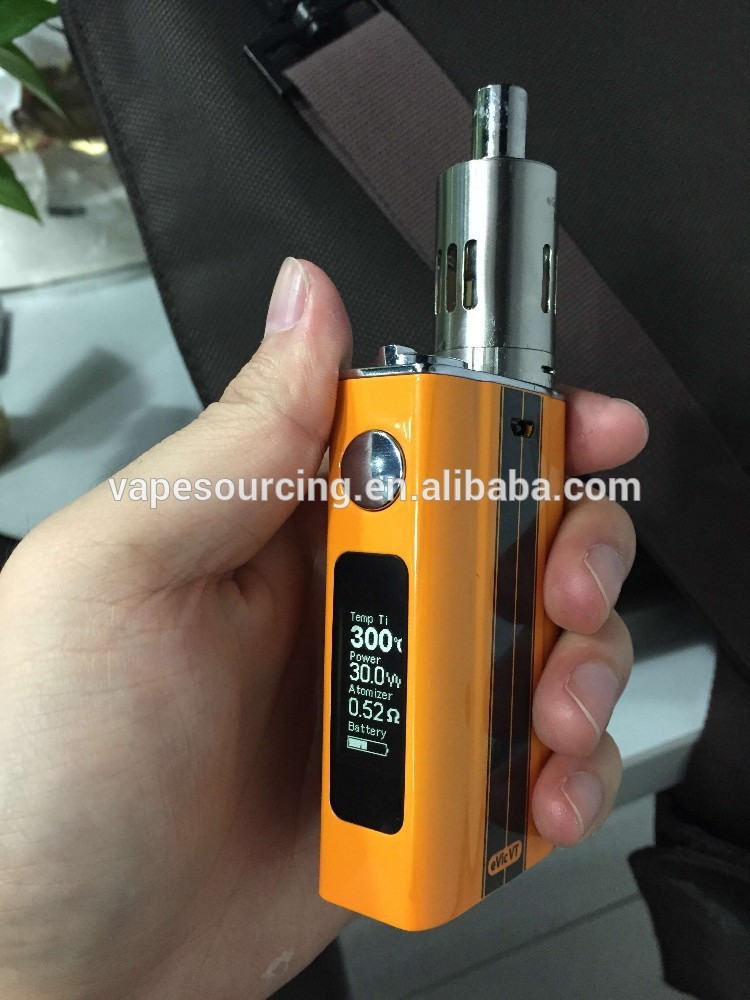 Joyetech/Eleaf I think have done a really good job with their mods and some of their tanks. If this mod works and is affordable I think it is another home run for those 2 companies
Reactions: nancybout, aldenf, Fullknight and 2 others
•••

I agree. The istick series is a huge success. My son just got a lemo 2, very impressed with that RTA. I think this will satisfy yet another share of the market.
Reactions: nancybout and jstrong
•••

Always a fan of Joyetech, every single piece of hardware I ever bought from them still works perfectly!
Reactions: tweaker30, JeremyR, STRIKER1944 and 1 other person
•••

i like the screen and the Ti capability but the shiny plastic orange finish with the chrome top plate looks a bit cheap to me. Maybe there will be different finishes on the released version!

I hope the screen will flip to horizontal when needed. If so, Busardo will go bananas fro it. He has been on about that for ever lol!!

also I think the 5000mAh LiPo is good I think and distinguishes it from the 18650 TC mods around at the moment. Good to have some choice!!
Reactions: nancybout, Phone Guy and jstrong
•••

I'm not a fan of trusting info from alibaba. I really hope this is a real Joyetech made device. And honestly I like the orange. Never seen an orange mod except for the Insanely ugly hammond (g) boxes which I would not buy personally. I would feel like I'm carrying around a industrial light switch box, like the kinds you see on cinder block walls in warehouses. LOL
Reactions: JeremyR, Fictitious Character, TheotherSteveS and 1 other person
•••

1st was the wave of subohm tanks, now will TC devices.

Almost makes me want to wait

Almost makes me want to wait

Welcome to the wide wide world of vaping, where everything is cloned a ridiculous amount times or you can find 100+ various versions of the same thing
Reactions: nancybout and Hammy75
•••

That's like drippers. You can order "the new hotness" dripper and before you even receive it, there will be a cheaper clone, and a even "newer" hotness. LOL
Reactions: coustain, Kaana and Hammy75
•••

I learned that this evic-vt can be brought from elegomall at the first time.
•••

Interesting! What is that big bump on the top panel, beside the 510? Is that just the top of the battery contact?
•••

TheBloke said:
Interesting! What is that big bump on the top panel, beside the 510? Is that just the top of the battery contact?
Click to expand...

My guess is it's one of Joyetech's infamous control knobs. They come up with some pretty unusual switches and I'd say that one rotates left and right similar to the control ring on their previous eVics
Reactions: bonjay and TheBloke
•••

BNEAT said:
My guess is it's one of Joyetech's infamous control knobs. They come up with some pretty unusual switches and I'd say that one rotates left and right similar to the control ring on their previous eVics
Click to expand...

Oh god yeah I just noticed that it doesn't have any other buttons besides fire!

Oh jesus, mod manufacturers! I thought it was bad enough that no mod maker will consider adding more than three buttons, such that we end up with ridiculous UIs like on the DNA 40 + clones (five-clicks-to-lock-then-hold-up-down-and-fire-for-five-seconds-then-use-up-or-down-then-five-clicks-to-unlock-then-spin-around-once-twice-three-times-while-tapping-out-"please"-"kill-"me"-in-morse-code-with-your-feet.)

Might be a tad hard to tell it to fire while sucking in vapour, of course. I know, have a voice memo feature so you can record your voice saying "Fire", then press a button to play back the recording of "Fire", so the mod can listen to that and start firing!

Give me a mod where I have to input the konami code upon waking the device and I might go for it, ya know nostalgia. Up down up down left right left right A B start!
Reactions: thetrucker, Hans Wermhat, caboog78 and 6 others
•••

Shigura said:
Give me a mod where I have to input the konami code upon waking the device and I might go for it, ya know nostalgia. Up down up down left right left right A B start!
Click to expand...

HAHA, I remember that!
Reactions: thetrucker
•••

BNEAT said:
HAHA, I remember that!
Click to expand...

Well for 250 you could get the LittUp Customs nintendo dna40 box but you might brick the dna chip lol
Reactions: MagicJosh and BNEAT
•••
Show hidden low quality content

Why the Evic VT Kicks Ash in Watts Mode!

Joyetech eVic VT 60W 5000mAh where the firmware we were promised